ABSTRACT: Background: A cross sectional study, to determine the endemicity, by systematic investigations in institutional settings to assess the prevalence of diseases.  Methods: The study was conducted by observational method over a period of seven months regarding the prevalence of particular disease and disease with co-morbidities. Among the several diseases of distinct clinical spectrum, various risk factors may presumably be contributed. This is an epidemiological study conducted prospectively at tertiary care teaching hospital which is a 350 bedded super speciality hospital. This study was conducted for a period of seven months from August 2016 - February 2017 in order to evaluate the cases for endemicity11. Patients’ demographic and diagnostic data between 20 to 80 years of age were collected from the patient’s case survey. Objectives: The main objectives of the our study was to provide awareness about diseased non communicable endemic prevalence of conditions like Diabetes, Hypertension and habitats like alcohol consumption and smoking. The intention of this manuscript would help the clinician to intervening patient’s relevant clinical and therapeutic issues for better future patient therapeutic perspective as well as to profile optimised and individualized care perspectives. This endemicity of diseases was correlated with socio-demographic parameters and patients over the age of forty years adults were included. Result: The predominant prevalence of the following diseases were in an  ordinal rank as to be the first COPD, second CKD, third acute pancreatitis, fourth CLD and renal calculi respectively and so on the other miscellaneous diseases. We have also found the occurrence of diseases like COPD, CKD, acute pancreatitis and CLD and renal calculi were predominant than that of other diseases for a particular period of time in those who are institutionalized.  This study would entail further investigations for the exact reason of such illness in an urban community or population as well. Conclusion: Epidemiological issues of non-communicable diseases endemicity have shown the maximum prevalence of COPD, next to the former CKD and acute pancreatitis respectively were observed in different departments of Institutional settings.

INTRODUCTION: Observational Study: This type of study draws inferences from a sample to a population where the independent variable is not under the control in which individuals are observed for certain clinical observations or certain outcomes measured.

No attempt is made to affect the outcome (for example, no treatment is given) 1. Epidemiological studies have played an important part in the elucidation of predisposing factors for COPD, CKD, acute pancreatitis and CLD and opportunities for prevention and treatment 2. The present study is designed retrospectively to focus on prevalence of various COPD, CKD, acute pancreatitis and CLD and causes of mortality in patients admitted to respective speciality units 3.

Endemic Diseases: An endemic disease is a disease that is always present in a certain population or characteristic of particular region. Similar studies were carried out by Eduardo Gaitan et al., 4.

Prospective Study: A prospective cohort study is a type of study in which a group of people with a shared characteristic where participants who are enrolled into the study before they develop the disease or outcome in search for an alternative, that meets cognitive criterion.

Our team has done a cross sectional study of seventy one individual cases of multiple diseases COPD, CKD, acute pancreatitis and CLD admitted in different departments were conducted in a tertiary care hospital of urban south India to determine the comparative prevalence in different diseased population 1. Prospective studies were carried out in a tertiary care setting over a period of seven months for finding the numerical expression for different diseases endemicity 5, 6.

Methodology: Survey of all the collected 120 cases of COPD, CKD, Acute pancreatitis and CLD with co-morbidities management consisting of inpatients (visiting every Monday, Tuesday and Wednesday) were accomplished over a period of seven months (from August, 2016 to February, 2017). We had visited to hospital departments and randomly patient’s cases were collected from different speciality departments during ward round participation. Those cases were scrutinized and evaluated for the disease endemicity. It is a purely a prospective studies for speculating the scenario of existing disease confined to a particular region.

Cases were segregated as per their demographics, concomitant co-morbidities and therapeutic considerations in order to interpret and draw inferences on the basis of their quantifiable likelihood. Disease research is employing the perspectives and methods of social epidemiology by replicating the methodology of the publication published by Noppert GA et al., in 2016 5. Then the data’s were compared and discussed with statistical analysis for finding of the existence of the diseased condition in a particular system.

RESUTS AND DISCUSSION: The prevalence of chronic obstructive disease (COPD) was found to be the maximum percentage 17.5 % among the non-communicable and communicable endemic diseases during the period of our study. Secondly the clinical condition, chronic kidney disease (CKD) was observed next slightly minimal to that of COPD which shows 14.1 %.

Next to that of CKD acute pancreatitis has shown more prevalent and gives 10.5 %. Succeeding to the previous discussed disease CKD, acute pancreatitis ranks the third position followed by chronic liver disease (CLD) and renal calculi ranks the fourth priority of having 9.1 % of population. Osteoarthritis (OA), Coronary artery disease (CAD) and VHF were found to be seemingly similar in percentage of about 8.3 % and the ratio of male to female ratio is 6:4, 8:2 and 6:4 respectively.

In our study the demographic characteristics of the patients as of their age group are tabularised in Table 2. The prevalence of different diseased cases with gender differentiation is shown in Table 1. The Co-morbidities of patients are shown in Table 3. Such similar studies were carried out with the same perspectives by Kuchake VG et al., 7, 8 12. 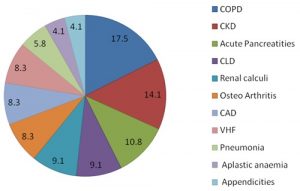 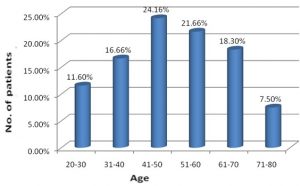 We have also observed nonspecific viral haemorrhage fever cases were reported to be 8.3 %. Except the two communicable endemic diseases pneumonia and viral haemorrhage fever all the other diseases are found to be considered among non-communicable endemicity 11. The percentage shown by those pneumonia and viral haemorrhage fever patients were 5.3 % and 8.3 % respectively. Pneumonia ranks penultimate to that of the least endemic aplastic anaemia which was observed as 5.8 % and 4.1 % respectively. Furthermore statically derived data might have not shown much of significance in speculating the diseased conditions in limited institutional setting but the study gives an idea about the endemicity of diseases among male and female population is disproportionate in distinct diseases. Except apastic anaemia all the other diseases were predominant among male patients than the feminine gender. Moreover our finding shows that, the male  is to female ratio   ostensibly is 2:1 except COPD which seeming to be 3:1 which may have certain amount of clinical relevance for further scrutiny.

Extensive researches have been going on concerning epidemiological issues of disease prevalence in distinct areas. In our study we have found ages between 41 to 60 years were more prevalent towards a particular endemic diseased condition. Ages less than 30 and above 80 was minimally prevalent which is shown in Table 2. This gives an insight towards multifaceted concepts explicitly to explore further in relevance to endemic and epidemiological studies. The endemicity of diseases within the age of 41 - 60 yrs has shown more prevalent when compare to that of other age groups and the reason is yet to be known.

Interventions: Ensuring the competent delivery of patient care by clinical pharmacists towards the patients was scarcely acquired and it paramount the most to evaluate services provided by them regarding the awareness about the predisposing factors of the diseases 3. Findings suggest that endemic infectious and non-infectious disease research publications that explicitly or implicitly incorporate social epidemiological approaches have stagnated in recent years 4. Hence clinical pharmacist’s role is very important in imparting information for better convalescence of patients.

CONCLUSION: The epidemiological issues of non-communicable diseases endemicity have shown the maximum prevalence of COPD, next to the former CKD and acute pancreatitis respectively were observed in different departments of Institutional settings. The age between 51- 60yrs has got higher prevalence rate of non- communicable diseases endemicity. Remaining cases were either with one (or) more co-morbid conditions. Institutional patient’s mortality and morbidity due to certain endemicity among the in-patient population is currently essential to reduce the impact of clinical consequences 9.

There are a lot of risk factors for polypharmacy which includes age, sex, race/ethnicity, health status, educational achievement levels and a number of co- morbidities may contribute in the prevalence of various health aspects 6. Our study is yet to determine the prescribing patterns and occurrence of potentially inappropriate medications for other co-morbid conditions 8. Further evaluation for the accurate results and clarification is yet to be done. Hence the work is being continued for accuracy.

ACKNOWLEDGEMENT: We would be profusely indebted to the institution for their academic supports. We gratefully implore the almighty for giving us good health and sound mind in order to love and serve the needy mankind. Also we would like to thank the pupils who have contributed their services for this study.

CONFLICT OF INTEREST: The authors declare that they have no conflict of interest on to this manuscript.