ABSTRACT: Hypertension is now defined on the basis of systolic (SBP) and diastolic (DBP) blood pressure levels and classified into stages on the basis of the degree of elevation. The generally recognized cut point for hypertension is an average office BP of 140/90 mmHg or greater, which has been obtained by a recommended standard technique with an accurate manometer and has been confirmed on at least one other occasion. Hypertension is the main cause of high blood pressure (BP), and BP is a major public health issue in India and is rampant among both urban and rural populations. It is the key modifiable risk factor for many diseases. Prescription-event monitoring or PEM involves a methodology in which the safety of new medicines are studied that are used by general practitioners (GPs). PEM is an observational cohort form of pharmacovigilance that is non-interventional, in the sense that nothing happens to interfere with the doctor's decision regarding which drug to prescribe for each individual patient. In this study, we focused on the prescription pattern of antihypertensive medications by the clinicians coming to the OPD of Department of Medicine, Rama Medical College, Kanpur.

INTRODUCTION: High blood pressure (BP) is a major public health issue in India and is rampant among both urban and rural populations 1. It is the key modifiable risk factor for many diseases. Although lifestyle modification is important in hypertension management, most hypertensive individuals require ≥2 antihypertensive drugs to reduce their BP and maintain it.

Hypertension is now defined on the basis of systolic (SBP) and diastolic (DBP) blood pressure levels and classified into stages on the basis of the degree of elevation. The generally recognized cut point for hypertension is an average office BP of 140/90 mmHg or greater, which has been obtained by a recommended standard technique with an accurate manometer and has been confirmed on at least one other occasion. This general definition has been modified for the classification of hypertension in specific high-risk populations such as diabetes mellitus and chronic kidney disease (CKD). Among other complications, hypertension can cause serious damage to the heart. Excessive pressure can harden arteries, decreasing the flow of blood and oxygen to the heart. This elevated pressure and reduced blood flow can cause: Chest pain, also called angina. Lifestyle modifications can be very effective, but in real-life, patients usually need a combination of them with pharmacological therapy. Very often, they need more than one type of anti-hypertensive medication or a combination of more in order to achieve their blood pressure target goal. A combination of lifestyle modifications and pharmacological medication may allow reduction of drug doses, better therapeutic control, more effective treatment, and prevention of other cardiovascular risk factors 4.

Prescription-event monitoring or PEM involves methodology in which safety of new medicines is studied that are used by general practitioners (GPs). PEM is an observational cohort form of pharmacovigilance that is non-interventional, in the sense that nothing happens to interfere with the doctor's decision regarding which drug to prescribe for each individual patient. It becomes essential if ‘real-world’ data are required 5. In PEM cohort studies exposure is obtained from a centralized service and outcomes from simple questionnaires completed by general practitioners. For selected events, follow-up forms are sent 6. PEM cohorts potentially differ in respect to the distribution of number of events per person depending on the nature of the drug under study as PEM studies captures all events and not only the suspected adverse drug reactions. This variance can be related either with the condition for which the drug is prescribed (e.g. a condition causing high morbidity will have, in average, a higher number of events per person compared with a condition with lower morbidity) or with the drug effect itself 5.

Before a medicine becomes generally available, clinical trials and studies conducted in animals are very useful, but these are having important limitations. When a medicine is taken by large numbers of patients in day-to-day usage, then only some of the side effects are notable. It is mandatory that safety must be continuously monitored, which is particularly important when medicine is new. Therefore PEM finds vital implications in the interest of public health care and concern. In this study, we focused on the prescription pattern of anti-hypertensive medications by the clinicians coming to the OPD of the Department of Medicine, Rama Medical College, Kanpur.

MATERIALS AND METHODS: It is a prospective observational study of prescription event monitoring to drugs used for hypertension. This study was carried out on the patients at the Department of Medicine Rama Medical College, Kanpur. The duration of the study was 6 months. The study started only after the approval of the Institutional ethics committee. All patients coming to the department with blood pressure systolic above 120 mmHg and diastolic above 90 mmHg and prescribed hypertensives will be screened for the study. Those who satisfy the inclusion criteria will be enrolled after taking written informed consent. Diagnosed patients of hypertension above the age of 18 years and diagnosed with primary hypertension will be included in the study. The copy of the prescription will be saved for future collection of data and analyzing the current pattern of prescription of antihypertensive drugs. The same process will be repeated at every visit along with charting of the blood pressure, a question related to any new signs and symptoms, and thus assessing any improvement or deterioration of the condition.

Statistical Analysis: Categorical variables will be presented in number and percentage (%). Qualitative variables will be compared using Chi-Square test /Fisher’s exact test as appropriate. A p-value of <0.05 will be considered statistically significant. Statistical analysis was performed using GraphPadQuickCalcs software available online at http://graphpad.com/quickcalcs/.The data will be entered in MS EXCEL spreadsheet and analysis will be done using Statistical Package for Social Sciences (SPSS) version 21.0.

Results: The study protocol was approved by the Institutional medical ethics committee, Rama Medical College & research center, Kanpur, U. P. Present study was conducted between 1- 06- 2018 to 30-11-2018 by attending the medicine OPD on a daily basis. A total of 39 ADRs were observed in 206 patients during the study.

Demographic Characteristics of Patients on Antihypertensive Treatment: 136 patients were studied during the 6 months of period. The age group ranged from 18 years and above. The comparison of hypertensive patients' gender showed that 52.4% of the total examined population which suffered from hypertension was male and 47.6% was female. Total Number of Patients (N) = 136, males = 70, female = 66.

Drug formulations like ACEis, CCBs, ARBs + CCBs, Thiazide Diuretics + ARBs / ACEis, Loop Diuretics, and some Other Agents like Digoxine, Amiodarone, and Trimetazidine seems to be less favorable, accounting 15%, 17%, 17%, 13%, 12% and 17% of the population respectively Fig. 1.

Antihypertensive drugs in combination were used to treat hypertension alone or other comorbidity associated with it Table 1.

The most common drugs used either or mono-therapy or in combination therapy were beta-blockers followed by calcium channel blockers, ACE inhibitors, diuretics, ARBs, and alpha-blockers which were amongst the least prescribed drugs Fig. 2 and 3. Moreover, 88% of the total number of antihypertensive active substances was prescribed once daily, and only 32% of the total population was treated by monotherapy and the rest by a combination of two or more active substances Fig. 4.

FIG. 2: THE BAR GRAPH SHOWS THE % FREQUENCY OF DRUGS USED IN HYPERTENSIVE PATIENTS, WHERE 100% IS THE TOTAL NUMBER OF DRUGS PRESCRIBED TO THE PATIENTS, INCLUDING THE ADDITIVE SUBSTANCES TO ANTIHYPERTENSIVE THERAPY (N= 136) 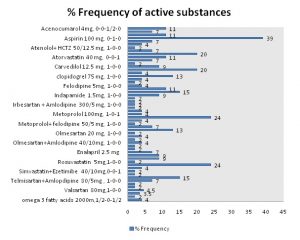 FIG. 4: THE PIE GRAPH SHOWS % FREQUENCY OF DOSAGE SCHEME, WHERE 100% IS THE TOTAL NUMBER OF ANTIHYPERTENSIVE ACTIVE SUBSTANCES

88% of the total number of antihypertensive active substances was prescribed once daily, and only 32% of the total study population it was treated by 64 monotherapy and the rest by a combination of two or more active substances. Concerning some other studies, they have also showed that a combination of two or more active substances in lower doses could be more effective comparing to monotherapy. In addition, regimens that are used once daily could be more effective by increasing patients compliance 7, 8. The choices of drugs for treatment and management of arterial hypertension should be based on patient age, severity stage and existence co-morbidities, as well as should be in agreement with hypertension treatment guidelines. According to the Joint National commission report initial anti-hypertensive treatment should include a thiazide diuretic, calcium channel blocker, angiotensin-converting enzyme (ACE) inhibitor, or angiotensin receptor blocker (ARB). In stage 1 hypertension, all first choice antihypertensive agents are appropriate for starting and maintenance of antihypertensive therapy, as monotherapy or in combination despite the age and gender. Also, low-dose diuretics are the best choice treatment in the beginning, in patients with uncomplicated hypertension stage 1. In case of stage 2 hyper-tension combination of active substances should be preferred (JNC 8) 2. The most favorable antihypertensive choice in case of monotherapy appears to be calcium channel blockers and beta-blockers in combination therapy followed by diuretics and ARBs. Despite the case that beta-blockers are avoided in those who are at risk of developing diabetes, one possible reason that could explain the above choice is that Beta Blockers remain favourable to those who have another indication like C.H.D 9.

In our study population, dyslipidemia and C.H.D are the most frequently co-morbidities along with hypertension, something that can also explain the high-frequency usage of antidyslipidemics which is additive to antihypertensive therapy. According to Devabhaktuni M. and Bangalore S. 10 study, a combination of CCBs with statins, especially of amlodipine with atorvastatin shows excellent efficacy and safety profiles for the treatment of hypertension and dyslipidemia 10. On the other hand, CCBs and diuretics, mainly thiazide and loop, appear to be more favourable in the elderly population. This finding complies with a paper by Walker and Whittlesea 9, according to which CCBs and low dose thiazide diuretics are safe and effective choices for the elderly hypertensive population. Furthermore, diuretics could be used in combination with the other antihypertensive agents in order to achieve better results in lowering blood pressure. Here it should be mentioned that the thiazide diuretics is not effective and should be switched to loop diuretics for patients with kidney problems, especially when GFR is 30 ml/min or less. In our study HCTZ, which belongs to thiazide diuretics, was used only as a combination therapy, mainly with BBs, ACEis, and ARBs. A combination of thiazides with newer antihypertensive agents is recommended by many guidelines in response to the realization that most patients require multiple antihypertensive agents to reach B.P treatment goal. One explanation for that could be that one pill regimen can increase patients’ compliance by decreasing A.D.Rs. and also two active substances in lower doses in one pill are more effective in lowering the blood pressure comparing to monotherapy.

CONCLUSION: In our study regarding the assessment of antihypertensive medications, we have come across the following conclusions: Arterial hypertension is an important risk factor for cardiovascular diseases and also contributes to increased morbidity and mortality. Many pharmacological agents are available for treatment; however, the choice depends on the patients’ age, diagnosis, co-morbidities, appropriate strength-dosage scheme, and patients’ tolerability. Out of total 136 patients, males were constituted more as compared to females. Hypertension can affect all ages despite gender and ethnicity. Also, the combination of drug treatment was more beneficial in order to achieve the blood pressure treatment goals and could be helpful to increase patients’ compliance comparing to monotherapy.  Age-wise distribution showed a maximum number of patients belong to the age group between 41-50 year, which appeared to be the most vulnerable group. Drug Prescription Pattern of oral antihypertensives showed that beta blockers were the most commonly prescribed drug followed by calcium channel blockers. Also, the most common co-morbidities along with hypertension were dyslipidemia and C.H.D., as well as the most frequently used drug groups were antihyperlipidemics, BBs, anticoagulant-anti-platelet and ARBs. More specific from the point of active substances atorvastatin, metoprolol, aspirin, and telmisartan in different combinations, doses, and dosage schemes seem to be the most favorable prescribed drugs.

ETHICAL APPROVAL: The study was approved by the Institutional Ethics Committee.

ACKNOWLEDGEMENT: We thank all the authors of the manuscript for the efforts put together and administration of Rama Medical College Hospital & Research Centre, Kanpur, U.P. to support the study.