ABSTRACT: Dandruff is a well-known and global consumer problem, characterized by flaking and scaling of the scalp, with itching and irritation. Although it is not a life-threatening disease, but it is directly related to individual self-esteem, confidence, and beauty. Approximately half of the population is suffering from dandruff and expending around billions of dollars, including hospital services and counter products. Despite its frequency, much controversy remains regarding the pathogenesis of dandruff. Many studies postulated that dandruff is caused by various microbial and non–microbial factors and interaction between them, such as Malassezia fungi, sebum secretion, and individual susceptibility. But some recent researches also claimed that dandruff is not only produced by fungi but there are some bacteria that also play a significant role in accelerating dandruff.  The present treatment includes antifungal agents, no doubt, they have significant results but with lots of side effects and limitations. So, there’s a need to formulate a cost-effective product that possesses anti-dandruff activity, and Zulamla (Hamdard Laboratory Patent Product) is used and is in the public domain from the last 35 years with no side effects. In this paper, dandruff etiology, pathogenesis, and pharmacological studies on Zulamla ingredients are discussed.

INTRODUCTION: Dandruff, also referred to as Pityriasis simplex / Pityriasiscapitis / Seborrheic dermatitis (confined to scalp) is a common dermatological problem that has existed since centuries. The word dandruff (dandriffe) is of Anglo-Saxon origin, a combination of ‘tan’ meaning ‘tetter’ and ‘drof’, meaning ‘dirty’ 1. Dandruff is the persistent, relapsing inflammatory condition with the visual perception of individually distinguishable flakes on the scalp, in the hair, or on the clothing 2, 3.

The development of dandruff is predicated on being determined by the colonization of yeast Malassezia furfur, sebum production, and individual susceptibility 4. Both dandruff and seborrheic dermatitis are analogous as both affect the seborrheic glands of the body, having the same causative organism and etiology and respond to similar management and treatment; however, they only differ in magnitude, locality, and severity.

Dandruff is confined to scalp and has itching, flaking, redness of scalp with mild inflammation, while as Seborrheic dermatitis affects scalp as well as retro- auricular area, face, chest and back causing scaling, flaking, pruritis and inflammation 2, 5. Several studies expose the fact that half of the population is suffering from dandruff 6. It has a high socioeconomic impact. Prevalence is more in males than in females due to androgen hormones 7.

No residents in any geographical area would have passed through freely without being affected by dandruff at some stage in their life 1. Together with counter products and hospital services, the total direct cost for treating dandruff was estimated to be $179 million, plus another $51 million indirect cost in the form of lost workdays 8. Besides physical discomfort such as itching, dandruff is socially embarrassing and impacts negatively on patient’s self-esteem. It has significant negative effects on a patient’s quality of life (QOL) in the form of psychological distress and confidence 7.

Global treatment of dandruff comprises frequent use of shampoos and lotions containing azoles, namely, ketoconazole, fluconazole climbazole, keratolytic agents, salicylic acid, sulfur, zinc pyrithione, coal tar, steroid, selenium sulfide. however, all these treatment options are very costly, and the chances of recurrence are high. Usage of anti-dandruff shampoo for long duration results in dryness, itchy scalp and premature greying of hair 9. And some of these agents may lead to some unwarranted effects like skin irritation from zinc pyrithione, the carcinogenic effect of coal tar when used in excess burning sensation by repetitive use of Salicylic acid and itching, rashes and allergy from ketoconazole 10, 11, 12.

Etiology of Dandruff: Based on recent evidences, dandruff depends on the sebaceous gland secretions, microfloral metabolism, and individual susceptibility, etc. that is on non-microbial and microbial factors 13.

Microbial Factors: The scalp has a biotic community of Staphylococcus spp., Propioni-bacterium spp, malassezia spp, and these are known components 14. The density of these organisms varies from 103 to 105 organisms per mm square but during dandruff, malassezia increases by two times of its normal level 15. malassezia is a leading cause of dandruff, and it is a monophyletic genus of fungi found in 7 billion human’s skin 16 previously, referred to Pityrosporum ovale, or Pityrosporum orbiculare. In 1846, Eichstedt was the first who recognize the presence of this fungus on pityriasis versicolor.

But the role of Malassezia on dandruff was first studied in 1874 by McGinley et al., and found that in normal subjects Malassezia species are 46%, in patients with dandruff is 74% and patients with seborrheic dermatitis is 83% 17. For decades, Malassezia limited to two types of species, the lipid dependent Malassezia furfur, and the lipophilic Malassezia pachydermatis. But with advances in research, many other species of Malassezia came into light 18. For many years, studies on dandruff predominantly focused on Malassezia species, out of 14 known cultured species, the most clinically significant species are M. restricta and M. Globosa and these two species are found to have more potential for the development of dandruff as compared to M. Furur 15, 19.

However, in this scalp biotic community, another microorganism community composed of anaerobic and aerobic bacteria such as Propionibacterium and staphylococcus. Disequilibrium in the proportion of these bacteria can lead to the formation of dandruff 20, 21

But there is no sufficient evidence for above assumption 21, 22, 15

Pathophysiology of Dandruff: A single square centimeter of the skin can be inhabited by one billion of microorganism and formed a complex community of skin microbiome 23. Dandruff is a superficial disorder of the stratum corneum, and many evidences showed that the dandruff is dependent on three factors: Sebaceous gland activity, micro-floral metabolism and individual susceptibility 24, 25, 26, 20, 27, 28. 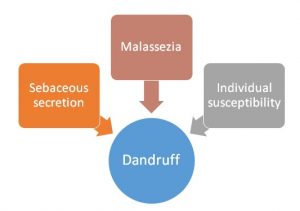 With the advanced molecular technique of terminal length polymorphism, Gemmer et al., proved that the most prominent species on dandruff sufferers are M. globosa and M. restricta 36. Malassezia is commonly found on sebum- rich areas of the body and degrade sebum, especially by lipases and produce free fatty acids 26. The importance of fungal species in the development of dandruff is supported by the fact that treatment option available for dandruff has mainly antifungal property and these products have a significant effect on reduction of flaking and other symptoms 37. 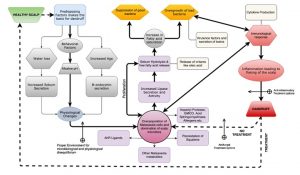 FIG. 2: MECHANISM OF DEVELOPMENT OF DANDRUFF

Management of Dandruff in Conventional Medicine: Therapeutic shampoo is a more convenient option for treating flakes and itching of the scalp. These products have the advantage over other topical formulation of cosmetics such as solutions, ointments, and foams.

The shampoos clean the scalp by emulsifying oily secretions and treat the underlying cause simultaneously. The shampoo applied for 5 to 10 min and then rinse for two to three times in a week for 4 weeks. There are many treatment options for managing dandruff through shampoos:

Keratolytic Shampoo: The pathogenesis of dandruff involves hyperproliferation, leading to the deregulation of keratinization and corneocytes clump together, appearing as large flakes of skin. Salicylic acid and sulfur are keratolytic agents which loosen the attachments of corneocytes by softening and dissolving and washed them.

Zulamal is a Powder Shampoo which Contains Ten Herbal Drug:

CONCLUSION: Herbal drugs are used in various indigenous systems of medicine from ages as folk medicine. The literature survey reveals its diverse potent biological activities, which were proved through several in-vitro and in-vivo animal studies.

Emblica officinalis, Lawsonia inermis, Acacia concinna etc. has been used in washing hairs since centuries and now is scientifically proved to possess the anit-fungal, anti-dermatophytic, anti-dandruff activity and also do conditioning of hairs.

This experimental evidence and encouraging research results suggest that zulamla powder is safe and effective in Dandruff.

ACKNOWLEDGEMENT: This article has been prepared based on classical literature available and researches available online. We appreciate efforts of the authors in establishing such useful database.