ABSTRACT: The complications as well as expense had been increased in marketing new chemical entities (NCEs) due to their poor solubility, high toxicity, high dosage, non-specific delivery, in-vivo degradation and short circulating half-lives. Nanoparticles possess immense prospective as an efficient drug delivery system. Nanoparticulate-based delivery systems have potential to significantly impact on pharmaceutical industry and can make a huge impact through drug targeting because it leads to reduction in toxicity and increased efficiency of chemical entity. Nanoparticulate drug delivery system has been extensively useful in the field of pharmaceutical, because they results in controlled and sustained release properties and can decrease the gap between drug discovery and drug delivery. This review aims to summarize various production methods, attributes, drug loading, drug release pattern and pharmaceutical applications of NPs. In this review, numerous potential methods employed for fabricating NPs such as emulsification solvent evaporation method, solvent diffusion method, salting out technique, coacervation/precipitation and polymerization has been illustrated through sequential diagrams.

INTRODUCTION: Since last thirty years, complications as well as expense had been increased in marketing new chemical entities (NCEs). Most of the drugs are limited by their poor solubility, high toxicity, high dosage, non-specific delivery, in-vivo degradation and short circulating half-lives. Nowadays, novel drug delivery systems have been developed which facilitate in diminishing these ever increasing problems

Nanoparticles (NPs) are colloidal, solid, submicron-sized-particles having diameter ranging from 1 to 1000 nm in which active entity is either dispersed or encapsulated in polymer matrix. Nanospheres are NPs in which drug is dispersed in monolithic or matrix type system. Nanocapsules are core-shell structure in which drug is constricted to a core surrounded by a polymeric membrane 3, 4, 5, 6 (Fig. 1).

This review provides an overview of novel methods that can be successfully used for fabrication of NPs. It also focuses on pharmaceutical applications of NPs for adequate drug delivery.

New tools and techniques enabled by nanotechnology have potential to significantly impact on pharmaceutical industry.  NPs can make a huge impact through drug targeting because it leads to reduction in toxicity and increased efficiency of chemical entity. They can protect drugs from degradation 7. These characteristics can aid to reduce the number of doses required, make treatment a better experience and reduce treatment expenses. These formulations admit delivery of insoluble drugs allowing use of previously rejected drugs or drugs which are difficult to administer 2. NPs because of their ultra small volume can easily pass through tiny capillary vesicles. They have prolonged duration in blood stream due to escape from rapid clearance by phagocytes. Passive and active targeting can be attained by readily manipulating the surface characteristics or particle size. They can be easily administered by various routes including nasal, oral and parenteral 8, 9, 10.

Numerous approaches for production of NPs include:

This method is based on the emulsification of an organic solution of polymer in an aqueous phase embodying drug followed by the evaporation of organic solvent. An emulsifying agent is incorporated to impart stability to emulsion. High shear stress is used for emulsification to reduce the size of emulsion droplets. Emulsification is followed by evaporation of organic solvent under vacuum, which leads to polymer precipitation and formation of NPs 11. An illustration of single emulsion method (o/w or w/o) and double emulsion method (w/o/w or o/w/o) has been depicted in Fig.2 and Fig. 3 respectively. 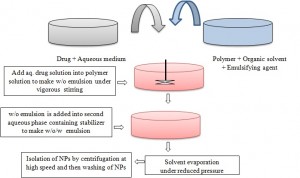 This method can be used for hydrophilic as well as hydrophobic drugs 12. The foreseen virtues of this technique viz. efficient encapsulation efficiency, greater batch to batch reproducibility, no need for homogenization, simplicity, ease of scale up and narrow particle size distribution nominates it as an appropriate method for production of NPs. The pitfall of technique is that water soluble drugs can leak in saturated external aqueous phase during emulsification which can reduce encapsulation efficiency 12, 13. Fig. 4 depicts the sketch of solvent diffusion technique. 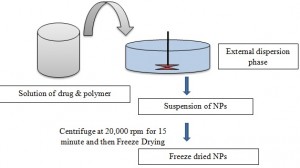 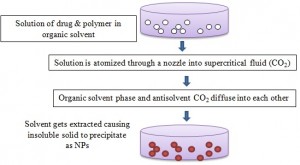 This technique involves formation of solution of polymer in water miscible organic phase. Preformed polymer solution is emulsified in an aqueous phase containing high concentration of salting out agent and emulsifier under strong mechanical shear stress to produce o/w emulsion. Fast addition of pure water to o/w emulsion under mild stirring reduces ionic strength and leads to the migration of water miscible organic solvent to aqueous phase inducing creation of NPs. Final step is purification by cross flow filtration or centrifugation to remove salting out agent. Important parameters to be considered are polymer concentration, molecular weight, stirring rate, stirring time, nature and concentration of emulsifying agent 13, 14. An outline of salting out technique has been depicted in Fig.6.

This method aims to improve the entrapment efficiency of hydrophilic drugs. Organic phase embodying polymer and emulsifying agent is emulsified in aqueous drug solution. Prepared emulsion is injected through a standard 0.7 mm nozzle into a chamber containing liquid nitrogen overlaying frozen ethanol followed by freezing at -80°C and lyophilization. Liquid nitrogen is evaporated and organic solvent present in frozen droplets gets extracted by ethanol leading to production of NPs which are subsequently filtered and dried under vacuum 15. Stepwise procedure of freeze drying technique has been displayed in Fig.7.

FIG. 6: SCHEMATIC DIAGRAM OF SALTING OUT 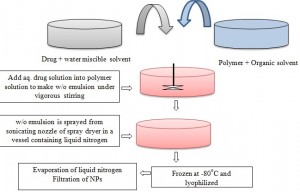 This methodology includes manufacture of w/o emulsion that is prepared by emulsifying aqueous solution of polymer in oil phase using suitable emulsifying agent. An appropriate cross-linking agent such as glutaraldehyde is added to harden droplets of emulsion to form NPs which are filtered and washed repeatedly with n-hexane and subsequently dried 19. The major attribute of this technique is that size of NPs can be controlled by controlling size of aqueous droplets of emulsion. Drawback of this technique includes tedious procedure and use of cross-linking agents that might induce chemical reactions with therapeutically active agent 16, 17. Fig. 9 illustrates emulsion cross linking method.

This method utilizes physicochemical property of polymer i.e. insoluble in alkaline pH medium. The polymer precipitates/coacervates when it comes in contact with alkaline solution. Particles are produced by blowing polymer solution into an alkali solution using compressed air nozzle to produce coacervate droplets. Separation and purification of NPs is done by filtration/centrifugation followed by successive washing 13, 17, 18.

Drug and polymer are dispersed in suitable solvent to produce dispersion. The dispersion is atomized in stream of hot air that produce small droplets from which solvent evaporates instantaneously leading to formation of free flowing particles. Particle size depends upon size of nozzle, spray flow rate, atomization pressure and inlet air temperature 15, 17.

This method utilizes the principles of both emulsion cross-linking and precipitation. However, instead of cross-linking the stable droplets, precipitation is induced by allowing coalescence of polymer droplets with NaOH droplets. A stable emulsion containing aqueous solution of polymer along with drug is produced in liquid paraffin oil.

Another emulsion containing aqueous solution of polymer with NaOH is produced in same manner. Both emulsions are mixed under high speed stirring that leads to collision of emulsion droplets at random which results in coalescence and precipitation of emulsion droplets to give small size particles 17. This method has been illustrated in Fig. 10.

Polymer is dissolved in aqueous acidic solution to obtain cation of polymer. This solution is added dropwise under constant stirring to polyanionic solution. Due to complexation between oppositely charged species, polymer undergoes ionic gelation and precipitates to form spherical particles. This technique can be exemplified with chitosan tripolyphosphate (CS/TPP) nanoparticles. However, CS/TPP NPs formed have poor mechanical strength thus, limiting their usage in drug delivery 13, 16, 17, 19. 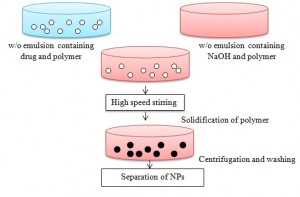 High drug loading capacity is measure of successful nanoparticulate system because it reduces amount of matrix material for administration. Drug loading can be achieved by incorporation method and adsorption method 17.

There are five possible methods for drug release 17.

The pharmacokinetic analysis of drug release from NPs can be described by biexponential function:

Where C = Concentration of drug remaining in NPs at time t; A & B are system characteristic constants a & ß are rate constants.

Targeting is propensity to focus drug loaded system to place of interest. An example of passive targeting is preferential accumulation of chemotherapeutic agents in solid tumors as a result of enhanced vascular permeability of tumor tissues compared with healthy tissue. A strategy that could allow active targeting involves surface functionalization of drug carriers with ligands that are selectively recognized by receptors on surface of cells of interest 20, 21, 22, 23.

For long circulation of NPs, a major breakthrough came in existence when hydrophilic polymer (polyethylene glycol, poloxamine and polysaccharides) is coated to the surface of NPs. The coating provides a cloud of hydrophilic and neutral chain at particle surface which repels plasma proteins. These coated particles are not recognized by RES; as a result coated NPs become invisible to RES and remain for a longer duration during circulation 24.

Polynucleotide vaccines work by delivering genes encoding relevant antigens to host cells where they are expressed, producing antigenic protein within vicinity of professional antigen presenting cells to initiate immune response. Such vaccines produce both humoral and cell-mediated immunity because intracellular production of protein, as opposed to extracellular deposition, stimulates both arms of immune system 25.

In central nervous system, blood brain barrier (BBB) is most important factor for development of new drugs. It is characterized by impermeable endothelial cells with tight junction, enzyme activity and active transport systems. Basically, BBB only permits selective transport of molecules. If we use NPs as targeted drug delivery, it will interact with specific receptor-mediated transport system in BBB. Thus, drugs which cannot easily cross BBB can easily pass with the help of NPs 28.

Nowadays, NPs have been extensively used for drug delivery of polypeptides, proteins, nucleic acid and genes. At the present time, researchers engrossed on various specifications for development of nanoparticle drug delivery system.