Categories Menu
Home » AN OVERVIEW OF BACTERIOPHAGE THERAPY OVER ANTIBIOTICS; AS AN ALTERNATIVE FOR CONTROLLING BACTERIAL INFECTIONS

AN OVERVIEW OF BACTERIOPHAGE THERAPY OVER ANTIBIOTICS; AS AN ALTERNATIVE FOR CONTROLLING BACTERIAL INFECTIONS

There are numerous treatments for lung cancer which mainly include surgery, chemotherapy and radiotherapy moreover individual or maybe in combination. Among different type of lung cancer, non-small cell lung cancer is a heterogeneous disease which typically harbors numerous “oncogenic driver mutation” occurring at varied frequencies of 2 to 25 3. These derived oncogenic mutations stimulate signaling cascades leading to uncontrolled growth and proliferation 4, 5, 6.

For overcoming this problem novel treatments are discovered which directly target the driver mutation to control the process of cancer was discovered and termed as “Target therapies”. Target therapies are an approach in which we can target the specific tumor cells which are responsible for the cause of disease and increase the survival time of the patient. At present several oncogenic mutation drivers have been accepted in adenocarcinoma including epidermal growth factor receptor (EGFR), anaphylactic lymphomas kinase (ALK), Kirsten rat sarcoma viral homolog (KRAS), and V-Raf murine sarcoma viral oncogene homolog B (BRAF) 7 .

Epidermal growth factor receptor belongs to the HER/erbB family of tyrosine kinase receptor which includes (HER 1, HER 2, HER 3 and HER 4). All the receptor shows a related molecular structure which is composed of an extracellular ligand-binding domain, a short hydrophobic trans-membrane region and an intra cytoplasmic tyrosine kinase domain 8. ErbB receptors are activated by growth factors of the EGF family. Six ligands of EGFR are known.

TABLE 1: EGFR LIGANDS AND THEIR RECEPTORS 9, 10

ErbB2 is a distinctive member of the ErbB family which does not bind with any of the known ligands, therefore it is preferred heterodimeric partner for other EGFR. EGFR plays a serious function in the very important cellular process which includes propagation, discrimination, relocation, endurance and angiogenesis. EFGR activated by receptor overexpression as well as dependent and independent ligand mechanism. EGFR bind to six known receptors including EGFR itself and transforming growth factor α. EGFR controls the growth of cell and proliferation through a transduction signaling pathway. Mutation of this receptor causes uncontrolled cell growth and proliferation.

Homodimerization and heterodimerization with other family members ligand lose its ability to bind with its own specific binding site activate tyrosine kinase. This autophosphorylation of the cytoplasmic domain of the receptor takes place resulting in activation of the downstream signaling pathway. In downstream signaling pathway adaptor molecule not bind with their receptor which increases process likes proliferation, angiogenesis etc. Discrimination of EGFR can lead to a variety of cancer including ovarian, head, neck, breast and lung. EGFR Pathway in non small cell lung cancers is illustrated below. 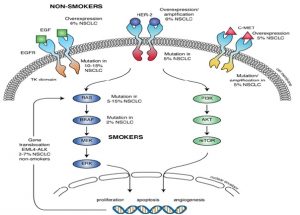 TABLE 2: ROLE OF EFGR IN DEVELOPMENT AND DISEASE

In contrast to all EGFR is occupied various essential functioning of tumor cells, for this reason, making it a prime target in lung cancer. The presence of EGFR mutation which includes deletion in exon 19 or L858R substitution in exon 21 (arginine group replaces leucine at codon 858R) has been reported in non - small cell lung cancer. For overcoming this problem EGFR inhibitors are developed. EGFR inhibitors are classified into two categories first one is tyrosine kinase inhibitor and the second one is monoclonal antibodies. Tyrosine kinase inhibitor binds to the area of tyrosine kinase in the epidermal growth factor receptor and hinders the activity of EGFR. Monoclonal antibodies bind to the extracellular components of EGFR prevent it to bind with its own receptor so that stop cell division 23. EGFR TKI’s plays a very important role in the prevention of lung cancer. Four generations of EGFR inhibitors have been developed for the treatment of non-small cell lung cancer. At present, first-generation EGFR tyrosine kinase inhibitor gefitinib and erlotinib, second-generation afatinib and third-generation osimertinib approved from food and drug administration (FDA) for the treatment of metastatic non-small cell lung cancer.

First Generation Epidermal Growth Factor Receptor Tyrosine Kinase Inhibitors: First-generation EGFR inhibitors gefitinib and erlotinib are the first-line treatments for non small cell lung cancer with activating EGFR mutations (deletion in exon 19 or L858R substitution in exon 21). Patience shows a good response for these drugs but these drugs develop secondary T790M mutations after one year of treatment. Secondary T790M mutation of EGFR reported in 2005 when the threonine group is replaced with a bulky methionine group in codon 790 in exon 20 of the EGFR gene. T790M located in the ATP binding pocket of the catalytic region and also refer to as a “gate kipper residue”. Replacement of threonine with bulkier group methionine delays the binding of these drugs. A recent study reveals that T 790 M not affect the binding of EGFR and EGFR TKI’s but it increases the binding affinity of ATP and EGFR result in less binding with EGFR TKI’s. For overcoming this problem second-generation EGFR TKI’s inhibitors are developed to treat NSCLC 24, 25.

Erlotinib: It also a reversible EGFR TKI’s inhibitor manufactured by Roche. In 2013, Erlotinib was approved by a federal agency (FDA) as a first-line treatment for EGFR mutation in non-small cell lung cancer 27.

Second Generation Epidermal Growth Factor Receptor Tyrosine Kinase Inhibitors: Afatinib and Dacomitinib are drugs used as a second-generation EGFR irreversible inhibitor and approved by FDA for treatment of non-small cell lung cancer. Afatinib (BIBW2922) is an irreversible epidermal growth factor rector tyrosine kinase inhibitor. Due to the presence of acrylamide warhead capable of alkylating cys79. This drug covalently and irreversibly binds a cysteine residue in EGFR to amino acid position 797. By forming covalent and irreversible bond afatinib block EGFR, HER 2 and HER 4 kinase. This enables it to inhibit EGFR kinase activity even in the presence of an EGFR T 790 M mutation. Dacomitinib (PF-00299804) is an irreversible inhibitor of EGFR, HER 2 and HER 4. Second-generation EGFR inhibitors possess a structurally related quinazoline base core scaffold and are identified as an ATP competitive inhibitor of wild type EGFR. These drugs show a good effect on these mutations but show toxic effect over body 29.

Afatinib (Giotrif): Afatinib developed by Boehringer Ingelheim for the oral treatment of cancer. It is an aniline-quinazoline derivative that covalently binds to EGFR, ErbB/HER2 and ErbB 4/HER 4. Covalent binding downregulates ErbB signaling by irreversibly inhibit tyrosine kinase autophosphorylation 30.

Dacomitinib (PF-0299804): Dacomitinib developed by Pfizer is an oral highly selective quinazalone-based irreversible inhibitor of EGFR, HER2 and HER 4. It covalently binds to a cysteine residue in the catalytic domain of the HER receptors. In comparison with first-generation EGFR tyrosine kinase inhibitor, it shows comparable inhibitory activity against the wild type EGFR kinase in-vitro. It is more potent than afatinib against EGFR sensitizing mutations (del19, L858R). It inhibits both wild type and mutant HER 2 kinase 31.

Neratinib (HKI-272): It is an irreversible pan-ErbB inhibitor and shows a positive response in non-small cell lung cancer patients with G719X mutations in EGFR 27. 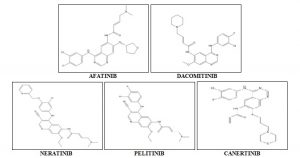 Rociletinib was initially investigated in phase I/II study in TIGER-X trial for a patient who has failed EGFR TKI in first-line setting. Updated pooled analysis report of TIGER-X/TIGER-2 reported a lower response rate of 34% for 625mg b.i.d dose and 28% for 500mg b.i.d dose. In year 2016 analysis report of TIGER-X was conformed ORR was 45% (95% CI, 31 to 60) and 18 patients with T790M negative disease the conformed ORR was 17% (95% CI, 4 to 41) 37. Based on this data, FDA voted against the accelerated approval of rociletinib because of lower efficacy and Clovis stopped the clinical development of this drug.

Nazartinib (EGF819): Nazartinib is a covalent irreversible mutant selective EGFR inhibitor it inhibits both L 858 R, Del19 (EGFR activating mutation) and T790M (resistance mutation) while sparing wild type EGFR 39. Results of preclinical studies give the evidence that it shows similar selectivity and wild type sparing property to other third-generation EGFR inhibitors. In phase, I dose ranging from 75 to 350 mg given to patients once daily. On January 29, 2016, 152 patients are treated with this drug in seven cohorts. In 127 patients confirmed ORR was 44% (56/127) with a 91% control rate of disease. 9.2 months (95% CI 9.0-NE) was the median PFS.  The most common side effect included diarrhea (40%), maculopapular rash (39%), pruritus (32%), dry skin (23%), stomatitis (23%) and fatigue (21%) 3rd and 4th-grade adverse effect includes maculopapular rash (14%), anemia (6%) and diarrhea (6%). Phase II trial is ongoing performed with six cohorts. In phase I/II nazartinib concomitantly being investigated in combination with capmatinib (INC28) specific MET inhibitor 40.

Avitinib: It is a pyrrolopyrimidine based moiety act as an irreversible inhibitor of EGFR TKI’s and distinct from other pyrimidine based irreversible inhibitors like osimertinib. It shows activity against EFGR mutation and T790M while sparing wild type 41. Avitinib in the USA used as a second-line therapy in NSCLC patients who have acquired the gatekeeper T790M after using first-generation inhibitors. In China, clinical trials are initiated. Phase I/II investigated for EGFR mutant patients who had progressed on first-line EGFR TKI. In seven cohorts about 136 patients are treated dose ranging from 50 mg to 350 mg bid. Excepted 50 mg bid dose all dose show their response. ORR and DCR were 44% and 84% correspondingly. With 150-300 mg Bid dose observed ORR and DCR were 51% and 89% correspondingly 42. Phase II recommended dose was 300 mg bid. 1st and 2nd observed side effect includes diarrhea (38%) and rash (24%) and 3rd and 4th-grade adverse effect diarrhea (2%) and rash (2%).

ASP8273: It is an irreversible tyrosine kinase inhibitor inhibits T790M mutation with limited activity against EGFR wild type. Phase I/II investigated for EGFR mutant Japanese patient who had progressed on first-line EGFR TKI, the ORR observed 50% with all patients’ doses with ≥ 100 mg and with patients T790M ORR observed 80%. An observed side effect includes diarrhea (56%), nausea (31%), vomiting (31%) and throm-bocytopenia (31%). Less commonly observed side effects are skin rashes (9%) and interstitial lung disease (2%) like events. In AA phase III trial ASP 8273 evaluate against first-generation EGFR TKI in the first-line treatment of EGFR mutant advanced non-small cell lung cancer was later initiated. Due to a lack of clinical efficacy, this trial was discontinued on the recommendation of the Independent Data Monitoring Committee in May 2017 34. 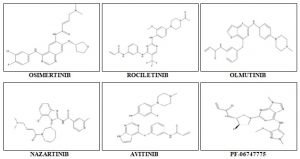 Fourth Generation Epidermal Growth Factor Receptor Tyrosine Kinase Inhibitors: In first and second-generation EGFR T790M mutation mechanism is a prime cause for resistance. Third-generation EGFR Inhibitors are developed to treat resistance mechanisms like osimertinib has been approved for the treatment of metastatic non-small cell lung cancer. But after ten-month of treatment, this drug shows resistance in the lung cancer patient. To overcome this problem fourth-generation EGFR TKI’S inhibitor is developed which acts on EGFR C797S mutation located on tyrosine kinase domain. The first compound which was discovered for this purpose was EAI001 which acts against L858R/T790M mutation but it shows modest potency against individual L858R and T790M mutant. EAI001 after medicinal chemistry optimization it was found that EAI045 show higher effectiveness and selectivity for L858R/T790M mutation. It is developed as an allosteric non-ATP-competitive inhibitor of mutant EGFR 45.

Afatinib, Erlotinib (first generation), Gefitinib (second generation) and Osimertinib (third-generation) EGFR inhibitors are approved by the FDA for the treatment of EGFR mutant/T790M. Recently, the fourth-generation drug under process which acts as aallosteric non-ATP-competitive inhibitor.

ACKNOWLEDGEMENT: I am very thankful to the Department of Pharmaceutical Sciences Bhimtal campus Kumaun University for providing the necessary facilities.

CONFLICTS OF INTEREST: I declared that to the best of my knowledge and belief neither my co-authors nor I have any interests which might conflict.