AN OVERVIEW OF DANDRUFF AND NOVEL FORMULATIONS AS A TREATMENT STRATEGY

AN OVERVIEW OF DANDRUFF AND NOVEL FORMULATIONS AS A TREATMENT STRATEGY

ABSTRACT: This review gives an insight of the scalp condition- dandruff which affects more than 50% of the human population. Malassezia furfur is reported as the main cause of dandruff. This article aims at investigating other causes of dandruff which include microbial and non - microbial factors. These factors have been explained in this article. It also highlights the various treatment options and newer formulations. Various active agents like anti- fungal agents, keratolytic agents and anti - proliferative agents that are used against dandruff, along with their mechanisms of action are covered in this article. Conventional formulations like Shampoos, creams and lotions have their own set of advantages and limitations. To overcome the disadvantages and prolong the release of actives, novel formulations like Liposomes, Niosomes, Solid lipid nanoparticles, Nanolipid carriers and Silver nanoparticles are being developed. Novel delivery systems have been successfully used for pharmaceutical formulations and they can prove to be a promising delivery system for scalp treatment too.

INTRODUCTION: Scalp is unique among skin areas in human. It is characterized by thick skin layer with high follicular density and abundant sebaceous glands. The pH of scalp is 5.5 and that of a hair shaft is 3.67 1. The presence of these glands along with the dark and warm environment of the scalp makes it more prone to mycotic infections like dandruff, seborrhoeic dermatitis and even parasitic infections like Pediculosis capitis. Although scalp disorders are not among those that cause severe physical illness or morbidity, yet are of great social concern. Scalp and hair conditions have more of psychological impact in human societies.

Even minor changes in hair like greying of hair, affects the self-confidence and self- esteem of an individual. Scalp disorders include fungal and bacterial infestations that cause problems like Tinea capitis or Pediculosis capitis. There are various types of Scalp disorders 2 some common and some uncommon. These include- (Ref Fig. 1). 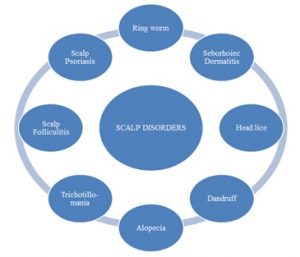 Some disorders have a definite cause while some may be idiopathic. Treatment of these disorders is important for personal hygiene.

Definition: Dandruff is a common scalp disorder, characterized by presence of corneocytes that form clusters due to their high cohesive power, in the form of flaky white to yellowish scales, accompanied by itching 3. It has been observed that dandruff occurs mainly between puberty to middle- age, the phase when sebaceous glands are most active.

Causes: The cause of dandruff varies among individuals, depending on their susceptibility. Causes can be classified into- a) Microbial and b) Non-microbial.

Fungal: Malassezia furfur is considered as the leading cause of dandruff. The fungi - Malassezia can lead to dandruff by either or both of the following mechanisms- 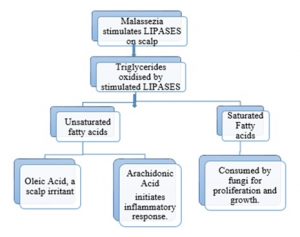 FIG. 2: REPRESENTS THE MECHANISM BY WHICH MALASSEZIA FURFUR CAUSES DANDRUFF

FIG. 3: EXPLAINS ANOTHER MECHANISM BY WHICH DANDRUFF IS CAUSED

Treatment: Treatment of dandruff can be done by adopting any or all of the following strategies: 7 Treatment strategies include: (Refer Fig. 4)

Treatment of the Cause: This primarily includes use of anti-fungal agents like Zinc Pyrithione, Selenium sulphide, Ketoconazole, Climbazole, etc.

Treatment of the Symptoms: This comprises of employing anti- proliferative like coal tar and keratolytic agents like Salicylic acid. 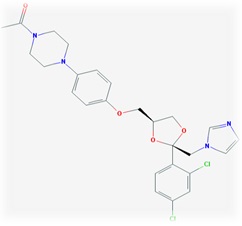 FIG. 5A: MECHANISM OF ACTION OF ZINC PYRITHIONE

FIG. 6: MECHANISM OF ACTION OF KETOCONAZOLE

3. Climbazole: It is one of the newer anti-fungal drugs used usually in combination or as a monotherapy 13. 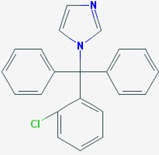 FIG. 7: MECHANISM OF ACTION OF PIROCTONEOLAMINE

* (Hyperplastic = an abnormal increase in the number of cells in an organ or a tissue with consequent enlargement).

Literature reveals comparative studies data which is compiled as follows:

1) Danby FW et al., reported that Ketoconazole (2%) and Selenium sulphide (2.5%) were equally efficacious but ketoconazole proved to be better tolerated 27.

2) Schmidt-Rose T et al., reported in their study that a combination of Piroctone Olamine (0.5%) and Climbazole (0.45%) proved to be equally effective on comparison with Zinc Pyrithione (1%) alone 28.

3) Piérard-Franchimont C et al., conducted a comparative study to evaluate the efficacy of a coal tar shampoo with Salicylic acid (2%) and Piroctone Olamine (0.75%). It was concluded in the study that non - coal tar shampoo containing Salicylic acid (2%) and Piroctone Olamine (0.75%) yielded significantly greater reduction in dandruff 29.

Various combination products are marketed since they prove to be more efficacious. Some are enlisted in Table 2.

TABLE 2: COMBINATION PRODUCTS ALONG WITH THEIR BRAND NAME

Conventional Formulations: The above mentioned drugs can be used in various types of formulations like Shampoos, Lotions / Applications, Creams, Herbal oils and gels.

Shampoos: These formulations are used to clean the dirt of scalp and other environmental pollutants, sebum, sweat, desquamated corneocytes and other greasy residues from previously applied hair care products 30. 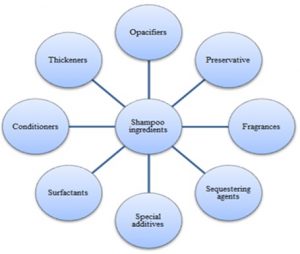 Since shampoos contain surfactants as cleansing agents, they may remove excess of sebum which leaves the scalp skin dry and hair become frizzy and unmanageable.

The main aim should be to develop a shampoo which removes only the right amount of sebum while leaving sufficient amount of conditioning agents. The basic ingredients of a shampoo have been listed in Fig. 9. Synthetic detergents and conditioners play the role of cleansing and manageability, while all other ingredients are used to aid appearance, stability and marketability.

Surfactants: These are amphiphilic in nature, i.e. they have both hydrophilic and lipophilic groups. The lipophilic end is used to bind sebum and oily dirt while the hydrophilic end binds to water, thus allowing removal of sebum with water. There are five types of surfactants depending on their ionic nature. Each type possesses varying properties of cleansing and conditioning 31.

A compilation of the various types of surfactants along with their chemical classes, charge and their specific characteristics has been given in Table 4.

TABLE 4: TYPES OF SURFACTANTS ALONG WITH THEIR CHEMICAL CLASS, CHARGE AND SPECIFIC CHARACTERISTICS

Creams are semi-solid while lotions are thick liquids.Consumers prefer lotions for hair over creams as creams may be greasier. The detailed advantages and disadvantages of the conventional topical dosage forms are discussed in Fig. 10. 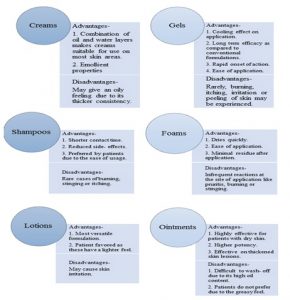 FIG. 10: CLASSIFIES VARIOUS CONVENTIONAL FORMULATIONS ALONG WITH THEIR RESPECTIVE ADVANTAGES AND DISADVANTAGES

4) Herbal oils: Oils as hair care formulations are preferred due to the moisturizing effect they provide on application. Herbal oils are a choice for hair care cosmetics as they have proven efficacy against the fungi Malassezia and they avoid the use of synthetic drugs. Moreover, herbal actives act as hair growth promoters, improve hair smoothness and reduce hair fall 32. Some of the herbal oils are given in Table 5.

5) Miscellaneous Formulations: Sedigel Scalp Moisturizing Gel for dry, itchy, flaky scalp. Sedigel is a clear, colorless gel proven to be safe and effective for application on scalp. The prominent characteristic of this gel is that it contains high concentration (10%) of glycerin while it is free from lanolin, steroids and SLS. Glycerin is a common humectant that hydrates and moisturizes the scalp skin 33, beneficial when present in the formulation. This moisturizing effect helps alleviate dryness and the itchy feeling which is associated with dandruff.

Extina Ketoconazole (2%) Foam Formulation: Extina (ketoconazole foam, 2%) Foam contains 2% ketoconazole in thermolabile hydro-ethanolic foam for topical application 34. Hydro-ethanolic foam is made up of ethanol and water. Ethanol is used to solubilize the drug thus increasing the bioavailability of the drug. This formulation is suitable for oily skin areas as well. This does not require the use of any preservatives.

The advantages of foam formulation over creams and ointments include:

One disadvantage could be small reactions at the site of application, like burning, stinging, etc.

Liposomes: Liposomes are self - assembled vesicular structures that contain one or more lipid bilayers. These have an aqueous core for solubilizing the hydrophilic drugs and a lipidic bilayer for entrapping the lipophilic drugs. These are often composed of phospholipids to form the bilayer and cholesterol to strengthen the bilayer structure 35. They are able to transfer entrapped and non-entrapped drugs into skin 36 and can act as carriers controlling the release of active ingredient. The phospholipids help localize the drugs at the site of action due to their interaction with sebum, improve deposition within skin, and reduce systemic absorption and minimizing drug side effects.

Niosomes: Niosomes are non-ionic surfactant based vesicles with microscopic lamellar structure. These can be synthesized using thin film hydration technique with cholesterol and single alkyl chain non- ionic surfactant. Niosomes increase the penetration of active ingredients and serve as a local reservoir of actives. These solubilize hydrophilic and lipophilic drugs, similar to Liposomes. Niosomes contain lesser amount of Cholesterol as compared to liposomes; also the phospholipid content of liposomes renders them less stable than Niosomes. Liposomes are expensive, require special storage and handling conditions, and have drug entrapment efficiency lower than Niosomes 41, 42.

Solid Lipid Nanoparticles: These are sub- micron range colloidal carriers prepared by using physiologically compatible solid lipid or a blend of lipids. These have relatively higher encapsulation efficiencies and improved stability as compared to Liposomes 45.

Polymeric Micelle Formulations: Polymeric Micelle Formulations have been investigated due to their potential to solubilize the lipophilic drugs. Spherical polymeric micelles are formed when the block co-polymers self-assemble at a concentration above their Critical Micelle Concentration (CMC). The hydrophobic segments aggregate to form their inner core which accommodates the lipophilic drug and the hydrophilic shell stabilizes the micelles in aqueous solution. Various advantages of polymeric micelles include reduced side effects, selective targeting, stable storage and stability towards dilution.

Silver Nanomaterials: Nano-sized metallic particles are unique and depending on their surface to volume ratio, they can change physical, chemical as well as biological properties. Additionally, these particles possess anti-bacterial as well as anti- fungal potency and they also mitigate anti- biotic resistant species. Among the metallic nano-structures, Silver ions have been more extensively explored in the medical sector, including burn and wound dressing for alleviating bacterial infections.

Mechanism of Action of Nanoparticles:

Polymeric Nano Capsules: These are nanostructures formed by a polymer shell that encloses a lipophilic or hydrophilic liquid core. These nanocarriers protect the skin from the irritant effects of the active agent and increase its residence time.

Thermophobic Foam: This is a new delivery system which is temperature activated.

This formulation is a mousse which, when applied to the skin, melts rapidly and evaporates at a rate faster than conventional lotions. Evaporation leads to a non- residue, sustained penetration of the active compound.

The novel delivery systems have been schematically represented in Fig. 12. 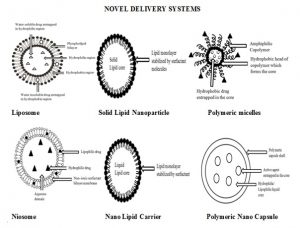 CONCLUSION: Dandruff is a scalp condition that affects more than 50% of the human population and affects the social behaviour of the sufferer along with possessing an unhealthy scalp. The cause of dandruff depends on individual susceptibility and hence treatment strategy also varies. Conventional formulations like shampoos, creams and lotions have been used for ages but have not been successful in avoiding recurrence of this condition. Also, these conventional formulations show limited efficacy and duration of action. Herein lays the role of novel delivery systems like Liposomes, Niosomes, and Solid lipid nanoparticles.

These delivery systems could provide high entrapment efficiency and prolonged duration of action since they form a reservoir of the active agents and remain in the scalp even after the clearance of the formulation and these reservoirs release the active agent on a prolonged basis. Novel delivery systems are being widely studied in pharmaceutical formulations and can be beneficial for treatment of dandruff. Novel formulations containing proven anti- dandruff agents with longer contact time at the site of action are the need of the hour and hence can prove to be advantageous in anti-dandruff treatments.

ACKNOWLEDGEMENT: M. Narshana wishes to express gratitude to the Almighty and parents for their blessings.

CONFLICT OF INTEREST: Authors express no conflict of interest.