AN OVERVIEW ON ARACHIS HYPOGAEA PLANT

AN OVERVIEW ON ARACHIS HYPOGAEA PLANT

INTRODUCTION:Plants have played a significant role in maintaining human health and improving the quality of human life for thousands of years and have served humans well as valuable components of medicines, seasonings, beverages, cosmetics and dyes.

Herbal medicine is based on the premise that plants contain natural substances that can promote health and alleviate illness. Today, we are witnessing a great deal of public interest in the use of herbal remedies. Furthermore, many western drugs had their origin in plant extract.

There are many herbs, which are predominantly used to treat cardiovascular problems, liver disorders, central nervous system, digestive and metabolic disorders. Given their potential to produce significant therapeutic effect, they can be useful as drug or supplement in the treatment / management of various diseases.

The peanut or groundnut (Arachis hypogaea) is a species in the legume or "bean" family (Fabaceae). The peanut was probably first cultivated in the valleys of Peru. It is an annual herbaceous plant growing 30 to 50 cm (1.0 to 1.6 ft) tall. Hypogaea means "under the earth", after pollination, the flower stalk elongates causing it to bend until the ovary touches the ground. Continued stalk growth then pushes the ovary underground where the mature fruit develops into a legume pod, the peanut – a classical example of geocarpy. Pods are 3 to 7 cm (1.2 to 2.8 in) long, containing 1 to 4 seeds 1.

Synonyms: Peanuts are known by many other local names such as earthnuts, ground nuts, goober peas, monkey nuts, pygmy nuts and pig nuts. Despite its name and appearance, the peanut is not a nut, but rather a legume 2.

Geographical source: The center of origin of groundnut is north-eastern Nigeria and northern Cameroon. It is found in the wild from central Nigeria eastwards to southern Sudan and is now cultivated throughout tropical Africa and to a lesser extent in tropical parts of the Americas, Asia and Australia. Its use as a pulse in West Africa was recorded by Arabic travelers in the 14th Century. Its importance declined after the introduction of groundnut from the New World tropics.

Varieties: There are vast varieties of groundnut that are grown in the world but the most popular varieties are mentioned below. All these varieties have different backgrounds, different characteristics and various other features that differentiate them from each other 3.

Nutrition Value: Peanuts are rich in nutrients providing over 30 essential nutrients and phytonutrients. Peanuts are a good source of niacin, foliate, fiber, magnesium, vitamin E, manganese and phosphorus. They also are naturally free of trans-fats and sodium and contain about 25% protein (a higher proportion than in any true nut) as shown in table 1 4.

Peanut hulls: The National Peanut Board website states, "Many people report they enjoy peanuts by including the shell and food scientists indicate that it's okay." The Peanut Board breaks down peanut shell content as follows by 60 percent crude fiber, 25 percent cellulose, 8 percent water, 6 percent crude protein, 2 percent ash and 1 percent fat. The composition differs based on peanut varieties and manufacturing environments. Other than dietary fiber, peanut shells offer virtually no nutritional value.There are 305 calories in 1 cup, in shell, edible yield of Peanuts in Shell (Shell Not Eaten). Calorie breakdown: 73% fat, 9% carbs, 18% protein 5. 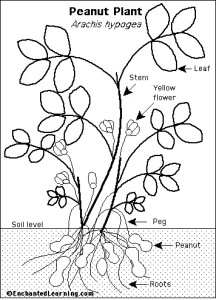 Shoot components: Plant shoots, including leaves and stems, are composed of just three types of tissue: 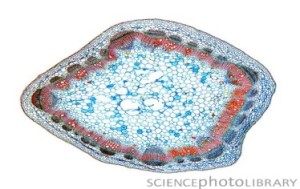 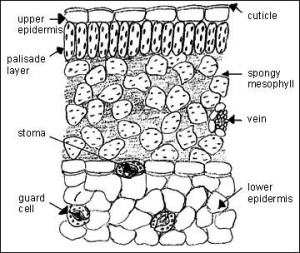 In Hulls: The chemical composition of peanuts shells varies with the peanut variety and shelling conditions but here is their approximate composition: Crude Fiber 60%, Cellulose 25%, Water 8%, Crude Protein 6%, ash 2% and Fat 1%. Groundnut shell hemicellulose A1 has been shown to contain residues of D-xylose and D-glucuronic acid.

FIG. 4: STRUCTURES OF CARBOHYDRATES A) XYLOSE B) GLUCURONIC ACID

Antimicrobial activity: Peanut shells contain large amounts of the flavonoid decomposition compound 5, 7-dihydroxychromone (DHC). DHC was found to inhibit the growth of two pathogenic fungi Rhizoctonia solani and Sclerotium rolfsii with ED50 values of 18 and 26 uM, and radicle elongation of peanut ED50 values of 65 uM. DHC did not promote the growth of symbiotic nitrogen-fixing bacteria; although related compounds did significantly increase their growth rate. DHC had no effect on the growth of Bradyrhizobium sp. at 10 uM/in medium containing low (1.0 g/L) mannitol as the carbon source. When added to high (10.0 g/L) mannitol medium DHC initially inhibited growth, but by 120 h after inoculation the growth of all treatments were similar. These results suggest a role for DHC released from peanut shells in suppressing pathogenic fungal infection and competing plant growth but not for Brady- rhizobium growth promotion 11.

Antifungal activity: Since peanut phytoalexins appear to play a role in plant defense mechanisms, the stilbenoids were evaluated first for their antifungal effects against plant pathogenic fungi. The fungal species tested are economically important worldwide for many crops, including peanut. Botrytis blight of peanuts is caused by Botrytis cinerea. Phomopsis spp. frequently produces fruiting structures in the peanut necrotic tissue of leaf scorch lesions (secondary invasion of leaf tissue) 12.

Antiviral activity: Peanut butter contains a substance called resveratrol. Resveratrol appears to inhibit viral infection/replication by regulating inflammatory responses and cellular stress pathways, rather than interacting directly with virus. To be more specific, resveratrol inhibits activation of the NF-kB pathway in response to TNF, and increases activation of p53. NK-kB is a “key regulator” of the inflammatory response. By inhibiting its activation, resveratrol acts as an anti-inflammatory. Since host NF-kB is necessary for efficient replication of several viruses, including Influenza A, HSV-1, and HIV-1; resveratrol is likely inhibiting viral replication when it inhibits NK-kB. By increasing activation of p53, a cellular protein involved in type I interferon-mediated antiviral responses; resveratrol is also likely increasing antiviral immunity13.

Antioxidant activity: Plant parts were freeze dried and extracted with methanol and aqueous methanol. Antioxidant activity of the extracts was tested using ORAC and DPPH assays. Total phenolics were measured using the Folin-Ciocalteau method. Chlorophyll was tested with the ORAC assay to dispel concern for potential chlorophyll antioxidant activity. TLC and HPLC were used for separation and preliminary identification of compounds. The identified phenolic compounds were assayed individually.

Anticancer properties: Resveratrol is a stilbene-typearomatic phytoalexin found in peanuts reported to exhibit several physiological activities including anti-cancer activities in vitro and in experimental animal models, aswell as in humans. Anticancer activity of this compound is mainly due to induction of apoptosis via several pathways, as well as alteration of gene expressions, all leading to a decrease in tumor initiation, promotion, and progression. A protective role of phytosterols (PS) especially beta-sitosterol, from colon, prostate, and breast cancer. Roasted peanuts contain 61-114 mg PS/100 g depending on the peanut variety, 78-83% of which is in the form of beta-sitosterol. The data suggest that peanuts and its products, such as peanut oil, peanut butter, and peanut flour, are good sources of PS 15.

Anti-inflammatory: Resveratrol exhibits its anti-inflammatory activity via different pathways that are mostly centered on COX-1 and COX-2. In addition to inhibition of COX-1 and COX-2 expression, through upstream suppression of the activity of NF-kB and I-kB kinase, 52 resveratrol reduced the production of prostaglandin E2 (PGE2) and the formation of ROS in Lipopolysaccharide (LPS)-activated microglial cells. Candelario-Jalil et al. 48 reported that this activity of resveratrol is based on the inhibition of the expression ofmicrosomal PGE2 synthase-1 (mPGES-1) and not COX-2 in rat microglia. MPGES-1 is directly involved in the synthesis of proinflammatory PGE2 (fig. 5). 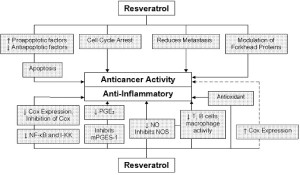 FIG. 5: RESVERATROL AS A CHEMICAL CONSTITUENTS PRESENT IN PEANUTS

Antihypertension: ACE a dipeptydyl carboxypeptide is known to play a vital role in the regulation ofblood pressure. It achieves this by converting Angiotensin I (an inactive decapeptide) into Angiotensin II (a salt retaining octapeptide and vasoconstrictor) by cleaving a dipeptide from the carboxyl terminal of Angiotensin I and inactivates bradykinin (a vasodilator nonpeptide) by the same mechanism. Therefore inhibiting ACE cumulates in positive hypotensive effect 16.

The antimutagenic effects on B(a)P and 4-NQO toward the TA98 and TA100 strains were found to follow a diminishing order: RDPD > RDPDEH >> PPI = PPIEH with dose-dependency. Antiproliferative effects on leukemia cells U937 and HL-60 were also detected. RDPD was found to be the most effective of all the peanut preparations.

At 100 microg/mL concentration, RDPD inhibited the proliferation of U937 and HL-60 cells by 56% and 52%, respectively. We propose to consider RDPD and RDPDEH in the development of natural chemotherapeutic or chemopreventive dietary supplements against leukemia and to upgrade the utilization of these by-products in peanut oil production 17.

Reduce cardiovascular disease risk: Peanut consumption improves indices of cardiovascular disease risk in healthy adults. Diets containing nuts reduce cardiovascular disease (CVD) risk factors. Subjects were provided 500 (+136) kcal as peanuts during an eight-week free feeding (FF) diet. The same amount of peanuts was added during a three-week addition (ADD) diet or replaced an equal amount of other fats in the diet during an eight-week substitution (SUB) diet. Energy intake from fat was increased through greater intake of MUFA and polyunsaturated fatty acids, while saturated fatty acid intake remained relatively stable under all conditions. Triacylglycerol (TAG) was reduced by 24% during ADD by 17% during SUB (p<0.05) and by 14% during four-weeks of FF, but then rebounded to baseline by week 8. Dietary fiber, magnesium, folate, alpha tocopherol, copper and arginine increased during all treatments. Serum magnesium increased in 13 of 15 subjects during FF (p<0.05).Regular peanut consumption lowers serum TAG, augments consumption of nutrients associated with reduced CVD risk and increases serum magnesium concentration 18.

Hypoglycemic and hypolipidemic effects: The hypoglycemichypoglycemic /hy·po·gly·ce·mic/ (-gli-sem´ik)
1. pertaining to, characterized by, or causing hypoglycemia.

AD is characterized by a progressive dementia, and is one of the most common neurodegenerative disorders in the elderly. It has been reported that resveratrol exhibits neuroprotective benefits in animal models of AD. Resveratrol promotes the non-amyloidogenic cleavage of the amyloid precursor protein, enhances clearance of amyloid beta-peptides, and reduces neuronal damage. Despite the effort spent trying to understand the mechanisms by which resveratrol functions, the research work in this field is still incomplete. Many concerns such as bioavailability, biotransformation, synergism with other dietary factors, and risks inherent to its possible pro-oxidant activities still need to be addressed. This review summarizes and discusses the neuroprotective effects of resveratrol on AD, and their potential mechanisms 22.

Peanuts: Peanuts are nutritious foods that contain more than 30 vitamins, minerals and phytonutrients. In fact, one ounce of dry-roasted unsalted peanuts has 2.3 grams of fiber, 7 grams of proteins that satisfies and are a good source of folate (the naturally occurring form of folic acid); niacin, and manganese. And, like all plant-based foods peanuts are naturally trans-fat and cholesterol-free with 12 grams of unsaturated (good) fat which has been shown to have heart protective benefits23.As part of a crop rotation program, peanuts can help to enrich the soil. Peanuts are legumes and are able to fix nitrogen in their roots. When peanut plants are tilled back into the soil, that nitrogen improves the soil for other crops, such as cotton or wheat, which require nitrogen to grown well.

Oil: Peanut oil obtained by cold pressing is used for medical treatments. Peanut oil is the basis for many therapeutic preparations. It has skin softening properties. Peanut oil is also edible and can be used in the kitchen. Peanut oil is used to cure Catarrh of The Bladder or Cystitis (pain and tenderness in the region of the bladder) 24.

Exposure to peanuts can occur in different ways:

Peanut allergy prevalence: Peanut allergy deserves particular attention. It accounts for the majority of severe food-related allergic reactions, it tends to present early in life, it does not usually resolve, and in highly sensitized people, trace quantities can induce an allergic reaction. In this review, we will discuss the prevalence, clinical characteristics, diagnosis, natural history and management of peanut allergy 29.

ACKNOWLEDGMENT: Thanks for the CMR College of Pharmacy management and Principal and Research guide, Nadenla Ramarao who motivated us to write the review on Arachis hypogaea.