INTRODUCTION:Medicinal plants are part and parcel of human society to combat diseases, from the dawn of civilization 1. There exists a plethora of knowledge, information and benefits of herbal drugs in our ancient literature of Ayurvedic (Traditional Indian Medicine), Siddha, Unani and Chinese medicine.

According to the World Health Organization, 2003 about 80 % of the population of developing countries being unable to afford pharmaceutical drugs rely on traditional medicines, mainly plant based, to sustain their primary health care needs 2. Herbal medicines are in great demand in the developed as well as developing countries for primary healthcare because of their wide biological and medicinal activities, higher safety margins and lesser costs 3.

The traditional medicinal methods, especially the use of medicinal plants, still play a vital role to cover the basic health needs in the developing countries. In recent years there has been a phenomenal rise in the interest of scientific community to explore the pharmacological actions of herbs or to confirm the claims made about them in the official books of Ayurveda 4.  Lawsonia inermis Linn (Family: Lythraceae) is a muchbranched glabrous shrub or small tree (2-6m in height), cultivated for its leavesalthough stem bark, roots, flowers andseeds have also been used in traditionalmedicine. This plant is a worldwideknown cosmetic agent used to stain hair,skin and nails 5.

The present attempt is to review and compile updated information on various aspects of L. inermis Linn. a plant used all over the world. This plant is commonly known as Henna and abundantly available in tropical and subtropical areas. Ancient history of India describes its diverse uses and also plays appreciable role in Ayurvedic or natural herbal medicines 6. 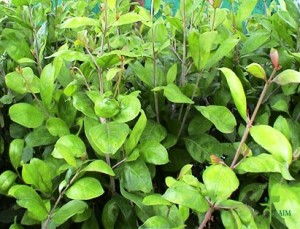 Description:  It is much branched, deciduous, glabrous, sometime spinescent shrub or small tree with grayish brown bark, attaining a height of 2.4-5 m. It is cultivated as a hedge plant throughout India, and as a commercial crop in certain states of India for its dye. Leaves are 1.3-3.2 by 0.6-1.6 cm, elliptic or broadly lanceolate, acute or obtuse, often mucronulate, base tapering; petioles very short. Flowers are numerous, less than 1.3 cm. across fragrant, white or rose-colored, in large terminal pyramidal panicled cymes; pedicels short, slender. Calyx 3-5 mm, long broadly campanulate; lobes 2.5-3 mm, long, suborbicular or subreniform, undulate. Stamens 8, inserted in pairs on the calyx-tube. Capsules 6 mm, diameter; hlobose, slightly veined outside, supported by the persistent calyx and tipped with the style. Seed capsules are red, globose, about the size of a pea, with numerous tiny pyramidal, brown pitted seeds 9.

Habitat: Henna, a traditional product with religious associations, has been widely used over the centuries for medical and cosmetic purposes in Africa, Asia, the Middle East and many other parts of the world. Henna is a finely ground brown or green powder originating from dried leaves of the plant Lawsonia inermis which is grown in dry tropical and subtropical zones, including North Africa, India, Sri Lanka, and the Middle East 10.

Morphological characters: The leaf of Lawsonia inermis L. is short, smooth, compound, ovate-lanceolate, acute, symmetrical, entire, pinnate, opposite, sweet smelling, characteristics or bitter in taste and varies in length, Lawsone is mainly present in the marginal vein or petiole in large quantity 56, 57, 58. Fig. 1 shows a photograph of Lawsonia inermis L. 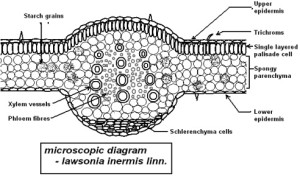 CONCLUSION: The widespread survey of literature exposed that L. inermis L. is highly regarded as a universal solution in the herbal medicine with diverse pharmacological activity range. This versatile medicinal plant is the unique resource of various types of chemical compounds, which are responsible of the various activities of the plant. Hence extensive investigation is needed to develop their therapeutic utility to combat diseases. As the global scenario is now altering towards the use of non-toxic plant products having traditional medicinal use, development of modern drugs from L. inermis should be emphasized for the organize of various diseases. Further evaluation needs to be carried out on L. inermis L. in order to discover the concealed areas and their practical clinical applications, which can be used for the benefit of the mankind.

ACKNOWLEDGEMENT: The authors are thankful to the authorities of Bundelkhand University Jhansi for providing support to the study and other necessary facility like internet surfing, library and other technical support to write a review article.