AN UPDATE ON MORPHOMETRY OF HUMAN PARATHYROID GLAND– A POSTMORTEM STUDY

AN UPDATE ON MORPHOMETRY OF HUMAN PARATHYROID GLAND– A POSTMORTEM STUDY

ABSTRACT: A collective assessment of all the morphometric measurements like size, weight, color and shape of the parathyroid gland is important in the determination of its normalcy. After that the histological examination for stromal and intracellular fatty content helps to determine the normalcy of the gland. There have been several studies on morphology of human parathyroid gland, but the grand total of cases accurately recorded, so far as I have been able to collect them from the literature, is comparatively small. Further till now there is no study done on area and volume of parathyroid gland. It seemed therefore that a careful study of additional cases is needed.  This study was conducted on 60 autopsy specimens in the department of anatomy in collaboration with the department of forensic medicine. A total 203 parathyroid glands were identified in relation to posterior border of thyroid gland in 60 post-mortem specimens. In the present study the average size including length, breadth, and thickness of parathyroid is 5.12 x 3.18 x 1.15mm. Average area and volume of parathyroid gland is 31.23 mm2 and 11.23 cu.mm. The average weight of parathyroid gland in the present study is 38.67mg. The smallest parathyroid weigh 7.8 mg and largest is 133.3 mg. Shape of the gland also varies greatly, it can be oval, spherical or elongated

INTRODUCTION: Parathyroid glands are small pea size yellowish brown, ovoid or lentiform structures, usually lying on the posterior surface of thyroid gland, enclosed in its capsule. They are commonly 5-6mm long, 3 mm across and 1-2 mm from back to front, each weighing about 50 mg 1. There is a considerable variation between the individuals with respect to size of parathyroid gland.

The largest gland is 12x2x1mm and the smallest is 2x2x1mm.When the gland is unusually long it tends to be narrow and thin, conversely when it is short, it inclines to be wide and thick. Any individual gland of weight over 60 mg is considered enlarge 2, 3. Parathyroid glands have a distinct encapsulated smooth surface that differs from thyroid gland, which has lobular surface, and lymph nodes which are more pitted in appearance.

A parathyroid gland is usually found in a well circumscribed fat lobule from which it can easily be shelled out, the capsule and the homogenous consistency of the gland serves to discriminate it from surrounding fat. Thyroid nodules are always harder, more reddish and less homogenous than parathyroid gland 4. Lymph nodes are also harder and less well demarcated from the surrounding fat. The soft consistency of the gland is useful in differentiating a parathyroid from a lymph node or a thyroid nodule, both of which are firm and elastic. The colour of parathyroid gland is typically light brown to tan which relates to their fat content, vascularity and percentage of oxyphill cells within the gland.

According Hojaij et al the average size of parathyroid gland is 6.7x3.9x2.0mm, and average weight is 33.1mg5.

Nanka O et al stated about length only and it is 4-8mm 6.

Alkerstrom et al commented for shape of the gland that it was oval, spherical or bean shaped in 83%, elongated 11%, bilobed in 5%, flat in 1% of cases.

The present study tried to fulfil the knowledge about morphometry of parathyroid glands, so as to help the surgeons in treating parathyroid related diseases.

The present study was conducted in the department of anatomy in collaboration with the department of forensic medicine, Pt B. D  Sharma University of Health Sciences, Rohtak, in between 2011-2014. The research work was appoved by ethical committee. The study was carried out on 60 autopsy specimens. After legal formalities and requisite permission from department of Forensic Medicine, the samples were collected within 24 hours of death without any sign of putrefaction. During collection appropriate age, sex, and cause of death were noted from morgue’s record book.

Procedure of collection of sample: From each cadaver the parathyroid glands were collected by “Block Dissection”, using the following steps: During postmortem examination, neck, thoracic cavity and the abdominal cavity were routinely exposed by midline incision from chin to symphysis pubis. In the neck region, incision was given carefully to avoid any damage to thyroid gland, and the midline neck mass was collected enmass. The extent of neck tissue removed for study followed a consistent routine. The visceral contents of the neck were collected enmass which includes the thyrohyoid membrane superiorly, the strap muscles anteriorly, the esophagus posteriorly, and the bifurcation of the innominate and the common carotid arteries. Soon after collection, each sample was gently washed in tap water. Samples were tagged immediately, which was bearing a code number for subsequent identification and then fixed in 10 percent formaldehyde solution.

Exclusion criteria: The following cases were excluded from the study:

Steps for the dissection of the Specimen: First of all remaining fascia was removed, infrahyoid muscles were pulled upwards, and lobes of thyroid gland were cleaned from its surrounding structures and pulled medially. Both recurrent laryngeal nerve and inferior thyroid artery were traced. The pretracheal fascia was retracted laterally, thus exposing the posterior surface of thyroid gland. Searching for the parathyroids were done all along the posterior surface of thyroid gland by following the arterial twigs of inferior thyroid artery. Small yellowish brown parathyroid glands were embedded either in the posterior surface of the capsule or outside the capsule. Then the glands were dissected out. Excess water was soaked with the help of blotting paper. The length, breath and thickness of gland was measured with the help of vernier calliper. As the parathyroid gland is varies in shape it may be oval, spherical, teardrop, pancake, or elongated like leaf or rod. Shape of the gland was noted. In any shape of the gland the length, the breadth, and thickness of the gland are not same. The parathyroid gland is geometric three dimensional shape like an ellipsoid. An ellipsoid is closed quadric surface that is a three dimensional analogue of an ellipse with distinct semi axes lengths c≠ b≠a, called as triaxial or scalene ellipsoid. The surface area of a general ellipsoid cannot be expressed exactly by an elementary function. However an approximate formula given by Knud Thomson can be used 9.

Volume of an ellipsoid is given by the formula: Volume=4/3πabc

TABLE 1: VARIATION IN LENGTH, BREADTH, THICKNESS OF ALL PARATHYROID GLANDS

TABLE 2: VARIATION IN VOLUME, AREA, WEIGHT OF ALL PARATHYROID GLANDS. 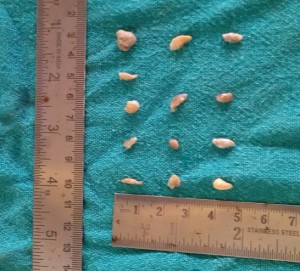 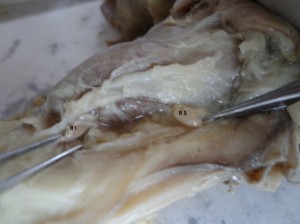 ACKNOWLEDGEMENT: None to be declared.

DECLARATION BY AUTHORS: None of the authors have any conflict of interest.