The study aimed to access the analgesic effect of Feronia limonia (FL, leaves of Feronia limonia (L.) Swingle). The leaves of FL were extracted with 95% ethanol and the dried extract (FLE) was administered intragastically (i.g.) at 100, 200 and 400 mg/kg. Analgesic effect was evaluated in two experimental animal models. Pretreatment with single dose of FLE also produced dose-dependent anti-nociceptive effects in thermally and chemically induced mouse pain models. In addition, single dose of FLE at 2g/kg body weight produce no observable acute toxicity in mice within seven days. These results demonstrate that FLE possess analgesic effects and has no obvious acute toxicity.

INTRODUCTION: Feronia limonia (Fam: Rutaceae) commonly known as wood apple or elephant apple, is moderate size tree which is native of India and occurs up to an elevation of 1500 feet in western Himalayas. The leaves of Feronia are aromatic, carminative, astringent, constipating, cardiotonic, antiemetic and expectorant 1.

They are useful in gastropathy, anorexia, diarrhoea, bronchitis, vomiting, cough, hiccough and vitiated conditions of vata. Charaka and Sushruta include the leaves and fruits in prescriptions for diarrhoea, toxicosis, urinary disorders, ringworm and other chronic skin diseases. Tender leaves of 5 trees- Feronia limonia, Mangifera indica (Aam), Syzygium cuminii (Jamun), Aegle marmelos (Bilva) and Citrus medica (Maatunlunga) are known as the Pancha Pallava group and are used as vaginal disinfectant due to their astringent, antimicrobial and anti-inflammatory properties 2.

However, so far no study has been reported to evaluation analgesic potency of F. limonia leaf extracts. So here we provide scientific data about the effects of an ethanol extract of FL (FLE) in animal models of pain.

Animals: Experiment was carried out on Swiss albino mice weighing 20-25 g. The animals were kept in room maintained at 27±1oC and at relative humidity between 35 to 60 % with a 12hrs light/dark cycle. They were fed with standard rat feed (Gold Mohr Lipton India Ltd.) and water ad libitum was provided. Ethical Clearance for handling the animals was obtained from the Institutional Animals Ethical committee (MMU/IAEC/O8/2007) prior to the beginning of the project work (131/1999/CPCSEA).

Herbal material and its extract: The fresh leaves of F. limonia were collected from Bhagwantpura Botanical Garden in the month of September-Octuber 2008. The herbarium of leaf was taxonomically identified and authenticated by the Regional Research Institute, Jhansi, India. The leaves were dried under shade, powdered and sieved. The coarse powder of shade-dried leaves of Feronia limonia was extracted with ethanol (95%) in a Soxhlet apparatus. The ethanol extract was then concentrated on rotary flash evaporator. Feronia limonia extract (FLE) was subjected to preliminary phytochemical investigation.12 When needed the extract was suspended in a CMC and administered to animals in different doses. In control animals, equivalent amount of the vehicle was administered intragastrically.

Acute oral toxicity: The limit test for acute toxicity was carried out at 2000 mg/kg oral dose of FLE in group of three rats as per OECD 423 guidelines 13. The rats were observed continuously for 2h for behavioural, neurological and autonomic profiles and, after a period of 24, 72 h and 7days, for any lethality, moribund state or death.

Acetic acid-induced writhing response in mice: Each mouse weighing 20-25 g was intragastrically administered with a test drug or vehicle 1 h before an intraperitoneal injection 0.6 % acetic acid at 0.1ml/10g body weight. The number of stretching or writhing was recorded between 5 and 20 min. after acetic acid injection. The percentage analgesic activity was calculated by the formula (1 - n/n´) x 100, where n and n´ are the average number of stretching of the drug and control group 14, 15.

Hot-plate latent pain response test in mice: The test was performed using Eddy’s hot plate maintained at a temperature of 55 ± 1°C. The basal reaction time of all animals towards thermal heat was recorded. The animals which showed fore paw licking or jumping response within 6-8 seconds were selected for the study. 60 min after the administration of test and reference compounds, the animals in all the six groups were individually exposed to the hot plate maintained at 55°C. The time taken in secs for fore paw licking or jumping was taken as reaction time. A cut off period of 15 secs is observed to avoid damage to the paws. The pain inhibition percentage (PIP) 16 was calculated by formula [(T1-T0)/T0) x 100] where T1 is post-drug latency and T0 is predrug latency 17.

Statistical Analysis: Data were expressed as the mean± standard error of means (SEM). The statistical analysis was carried out employing analysis of variance (ANOVA). All the values were compared to the saline control. Differences were considered statistically significant at p<0.05.

Acute oral toxicity: The limit test for acute toxicity was carried out and the relatively high LD50 value (more than 2000 mg/kg p.o.) obtained in this study for Feronia limonia extract (FLE) suggests that within this dose range the extract is relatively safe and non-toxic to rats as no observable acute toxic effect were produced.

All values represented as mean±SEM and values are overall significant. 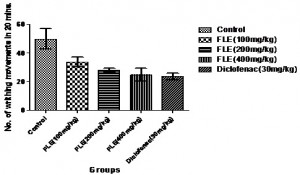 All values represented as mean± SEM and values are overall significant. 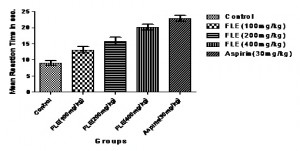 DISCUSSION AND CONCLUSION: In this study, we investigated the analgesic effects of an ethanol extract of Feronia limonia in experimental animal models. The acetic acid induced writhing test is very sensitive and able to detect anti-nociceptive effects of compounds at dose levels that may appear inactive in other methods like tail flick test. However, the test is not specific, as it does not indicate whether the activity was central and/or peripheral. The abdominal constrictions produced after administration of acetic acid are related to sensitization of nociceptive receptors to prostaglandins. It is therefore possible that the extracts exert their analgesic effect probably by inhibiting the synthesis or action of prostaglandins.

Pain induced by thermal stimulus of the hot plate is specific for centrally mediated nociception. The hot-plate test is commonly used to assess narcotic analgesics or other centrally acting drugs and the ability of the extract to prolong the reaction latency, in a dose dependent manner, to pain thermally-induced in mice by the hot plate further suggests centrally mediated analgesic effect. The enhanced analgesic effect of FLE in the hot plate test might again be due to the inhibitory action on prostaglandin synthesis. In thermal method, Feronia exhibited a greater activity and the activity was comparable to that of the standard drug Aspirin. FLE may be exhibiting its analgesic effect by involving both peripheral and central nervous mechanisms.

In conclusion, our results indicate that FLE has analgesic effects, which provide pharmacological evidence for folk uses of leaves of Feronia limonia in the treatment of various pain conditions. Moreover, the active principle responsible for above mentioned pharmacological actions also remain to be identified.

ACKNOWLEDGEMENT: The authors are grateful to Prof. S.K. Prajapati, Head, Institute of pharmacy, Bundelkhand University, Jhansi, India for providing the necessary laboratory facilities and we are thankful with our deepest core of heart to Prof. S. K. Jain for valuable suggestion.