INTRODUCTION: Algesia (pain) is an ill-defined, unpleasant sensation, usually evoked by an external or internal noxious stimulus. An analgesic selectively relieves pain by acting in the CNS or on peripheral pain mechanisms, without significantly altering consciousness. So analgesic activity means capacity of a substance to neutralize the pain sensation 1.

Pain is an important signal and primarily protective in nature which causes discomfort. Analgesics relieve pain as a symptom, without affecting its cause 2. Analgesics are a class of drugs used to relieve pain. The pain relief induced by analgesics occurs either by blocking pain signals going to the brain or by interfering with the brain's interpretation of the signals, without producing anesthesia or loss of consciousness.

However, the excessive use of NSAIDs may cause gastro-intestinal ulcers, bleeding, and renal disorders. Therefore, new analgesic drugs in terms of herbal are being searched as alternatives to NSAIDs and opiates 7. Medicinal plants contain various new potential active constituents with good therapeutic effects. Synthetic drugs development requires various steps for successful introduction of new molecule which has to be screened and tested for activity which involves huge expenses. On the contrary many medicines of plant origin had been used since long without any adverse effects. It is therefore mandatory to introduce new medicinal plants to develop analgesic drugs those will be cheaper, less toxic and more effective.

Analgesic activity of drug or any test sample at different steps of pharmacological investigation can be assessed by various methods like acetic acid induced writhing method and Hot plate method. The acetic acid induced writhing method is an analgesic behavioural observation assessment method that demonstrates a noxious stimulation in mice. In Hot plate method the paws of mice and rats are very sensitive to heat at temperatures which are not damaging the skin. The responses are jumping, withdrawal of the paws and licking of the paws. The time until these responses occur is prolonged after administration of centrally acting analgesics, whereas peripheral analgesics. E. ochreata, commonly known as ‘Amarkand’ or ‘Singadyakand’, is a ground orchid in the family Orchidaceae. It is a perennial tuberous herb and usually appears in the forest during rainy season in shady rainforests 8. It is an herb growing in dry deciduous forest in huge patches and on slope where the soil is deep. It is terrestrial, perennial herbs, pseudobulbs ovoid conical, marking irregular, transverse longitudinal, leaves 2-5, sheathing at base, ablong-lanceolate to ovate- elliptic. Flowers in dense racemes clustered at top of scape, corolla yellow, capsules broadly ovoid, deflexed, strongly ridged, green 9. Ehanobotanical survey of the forest areas of Maharashtra revealed that these tubers are used as a specialty food, general tonic and as rejuvenating herb. It has been used by the tribes for properties like astringent, antifatigue, aphrodisiac, anthelminthic and as a blood purifier. The tubers are also used in cough, cold and heart troubles 10. Tribals have been using tubers as a general tonic and as rejuvenating since long.

Zingiber cassumunar Roxb. (Family Zingiberaceae) known locally as “Phlai” in Thai is a perennial herb, consisting of underground rhizomes. Traditionally, the rhizome of this plant has been used for treatment of inflammation, muscle and joint problems, menstrual disorders, abscesses, and skin diseases and wound healing. The ethnomedical use of Zingiber cassumunar Roxb. (Zingiberaceae) and its frequently reported uses of the rhizome include topical treatment of sprains, abscesses and skin diseases.  The rhizome can be crushed and directly rubbed onto the afflicted area or the sliced rhizome can be fried in a pan together with coconut oil, to obtain composite oil, which is applied to the inflamed area 11.  The findings support the use in Thai traditional medicine of Zingiberaceous plants, especially Zingiber cassumunar, for treatment of allergy and allergic-related diseases 12.

Thus on the basis of these prominent uses of E. ochreata, tubers and Zingiber cassumunar Roxb.  were selected for my further work. Due to lack of well-documented scientific evidence, the present research paper is focused on analgesic activity which will predominantly impede the progress of active molecule and extracts in the future avenue.

Plant Material: According to flora of Kolhapur district, localities for Eulophia ochreata Lindl in Kolhapur region are Mahalunge, Panhala Turrukwadi 9.  Eulophia ochreata Lindl. Plant species along with tubers and rhizomes and Zingiber cassumunar Roxb. 13 plant species along with leaves and flowers were collected from the Bhimashankar region. The plant was identified and authenticated by Dr. G. G. Podar, HOD, Department of Botany, Y. C. College of Science, Karad and Voucher specimen was deposited at the same college as number AAK1and  AAK2 respectively.

Isolation of active fraction was carried out using column chromatography. Fraction 1, 2, 3, 4, 5 was collected, out of which fraction 3 called as Isolate 1 shows single spot and was selected for further analysis. Chloroform extract and isolate 1 were tested for in-vivo models for evaluation of analgesic activity.

Isolation of active fraction was carried out using column chromatography. Fraction 1 and 2 was collected, out of which fraction 1 called as Isolate 2 was selected for further analysis. dichloromethanolic extract and isolate 2 were tested for in-vivo models for evaluation of  analgesic activity.

Experimental Animal: Swiss albino mice of both sexes weighing between 18 to 25 gm obtained from CPCSEA approved animal house of National Institute of Bioscience at Dhangawadi Tal Bhor District Pune. The animals were acclimatized at room temperature (28 ± 5) oC with a relative humidity of 55 ± 5 % in a standard wire meshed plastic cages for 4 to 5 days prior to commencement of the experiment. During the entire period of study the animals were supplied standard pellet diet and water ad libitum. All animal experimentations were carried out with the guidelines of institutional animal ethics committee (IAEC). All experimental protocols were approved by the institutional animal ethics committee having registration no. 1290/PO/Re/S/09/ CPCSEA 19/01/17

Acute Toxicity Studies: Acute toxicity study was conducted and   the LD50 for each of the extract was determined and one tenth of the extract dose (LD50) was selected as maximum dose for the evaluation of analgesic activity.

Acetic Acid Induced Writhing Method: 17, 18 The acetic acid induced writhing method is an analgesic behavioural observation assessment method that demonstrates a noxious stimulation in mice. The test consists of injecting 1% (v/v) acetic acid solution intraperitoneally and then observing the animal for writhing (specific contraction of body) 14.  A comparison of writhing is made between positive control (Aceclofenac). The test sample was given 30 min prior to acetic acid injection orally. The animal that received the sample will give lower number of writhing than the control, i.e. the sample having analgesic activity will inhibit writhing. Aceclofenac as analgesic, antipyretic and anti inflammatory actions was used as reference standard drug.

The dose of extract and isolate was 200 mg/kg.  Each mouse was weighed properly and the dose of the test samples and control materials were adjusted accordingly. Test samples, control and aceclofenac were given orally by means of an oral feeding needle. A thirty min interval was given to ensure proper absorption of the administered substances. Then the writhing inducing chemical, acetic acid solution (1% v/v, 2.3 ml/kg) was administered intraperitoneally to each of the animals of a group 14. After an interval of five minutes, which was given for absorption of acetic acid, number of abdominal constrictions i.e. (writhing), 15, 16 was cumulatively counted over a period of 30 min.

The percentage inhibition of analgesic activity was calculated by using following formula:

Hot Plate Method: 19 The paws of mice and rats was very sensitive to heat at temperature which are not damaging the skin when animal is placed on hot plate,  the observed responses were agitation, rapid withdrawal of paws, licking of the paws and jumping which was first observed  taken it as latency time.

Experimental Protocol: The analgesic activity was assessed by hot plate technique method.  Swiss albino mice (18 - 25 g) were selected, weighed and divided into six groups of six animals each.  All these animals were fasted 18 h prior to commen-cement of experiment and water was provided.  Each group received a particular treatment as group-I (control) group-II (Standard pentazocine), group-III (Extract 1) group-IV (Extract 2) group-V (Isolate 1) and group-VI (Isolate 2).

Animals of group I received the normal distilled water 1 ml/kg by oral route. Group II received standard pentazocine 5 mg/kg by i.p route.  Group-III (Extract 1) group-IV (Extract 2) group-V (Isolate 1) and group-VI (Isolate 2) received a dose of 200 mg/kg by oral route.  Each mice was placed on the hot plate which was maintained at constant temperature 55 °C. The basal reaction time is the time taken for the jump response or paw licking which ever appears first was observed.

The reaction time of animals in all groups was noted at 30, 60, 90 and 120 min after the drug administration. The cut off time of 15 sec was taken as maximum analgesic response to avoid injury to the paws. The percentage analgesia at each time interval was calculated.

Preparation of Sample: To prepare solution of the test samples at the dose 200 mg/kg body weight, 0.2 mg of the sample was measured respectively.  After proper weighing of samples distilled water was slowly added. The final volume of the sample was made 10 ml.

Preparation of Control Solution: Distilled water was used as control and dose given was 1 ml/kg by oral route.

Statistical Analysis: Values for analgesic activity were expressed as "mean ± SEM".  The data were analyzed by using one way ANOVA and the significance of difference between means was determined where the values of p<0.05 were considered significant and those of p<0.01 and P<0.001 were highly significant.

RESULTS AND DISCUSSION: Analgesic activity was determined by comparing the percent writhing inhibition by the extracts and isolates in comparison to the standard. The more the writhing inhibition by the test groups the more the positive activity. The chloroform extract (60.17%) isolate 1(45.59%) and dichloromethanolic extract(55.48%)  and isolate 2(48.07%)  of  Eulophia ochreata Lindl. and Zingiber cassumunar Roxb. respectively  showed significant inhibition as in pain response as compared with standard aceclofenac (51.10%) at the dose of 10 mg/kg. 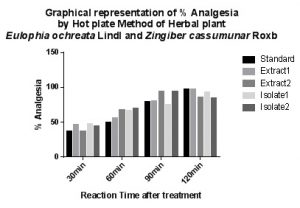 FIG. 2: GRAPHICAL REPRESENTATION OF % ANALGESIA BY HOT PLATE METHOD IN MICE OF EXTRACTS AND ISOLATES OF EULOPHIA OCHREATA LINDL. AND ZINGIBER CASSUMUNAR ROXB.

CONCLUSION: The analgesic effect of Eulophia ochreata Lindl. and Zingiber cassumunar Roxb. was studied by using Acetic acid writhing method and hot plate method. Acetic acid produced nociception by liberating endogenous substances including serotonin, bradykinin, histamine and prostaglandin, which may stimulate sensory nerve ending. Therefore Eulophia ochreata Lindl. and Zingiber cassumunar Roxb. extract might be inhibiting the synthesis and or release of these endogenous substances. In hot plate method, unpleasant sensory and emotional experience associated with acute or potential tissue damage leads to pain. Analgesic effect against thermal noxious stimuli may be elicited through opioid receptors or through modulation of several neurotransmitters involved in relevant phenomena. From the above results we can say that the both the plant having analgesic activity and the better results are obtained. The analgesic activity of the extracts and isolates may be due to the interference of their active principles with the release of pain mediators.

This concluded that, extracts and isolates could be beneficial in the management of pain. The new findings in the present investigation offer a scientific support to the ethno medicinal use of the plant by the traditional people. Thus further study is needed to identify the chemical structure present in the extract that may have analgesic activity.

ACKNOWLEDGEMENT: The authors would like to acknowledge the Principal Dr. C. S. Magdum sir and Vice Principal Dr. S. K. Mohite sir of Rajarambapu College of Pharmacy, Kasegaon for providing facility to conduct the research work.

CONFLICT OF INTEREST: Authors do not have any conflict of interest.