ANALGESIC AND ANTI-INFLAMMATORY POTENTIAL OF THE PLANT ERVATAMIA CORONARIA (STAPF.)

ABSTRACT: The present study was conducted to evaluate the analgesic and anti-inflammatory potential of the flowers of Ervatamia coronaria. The analgesic activity of the extract was assessed by the acetic acid induced writhing test.  Aspirin was used as a standard drug. The anti-inflammatory activity was evaluated by carrageenan induced rat hind paw edema method. The initial paw volume was measured plethysmographically immediately before subplanter injection. The relative increase in the paw volume was measured in control, standard and treated groups, 4h after carrageenan injection. The results of acetic acid writhing test in mice showed a significant decrease in number of wriths in ethanolic extracts of flowers of E. coronaria, suggesting peripheral analgesic effect. In carrageenan induced rat hind paw method; it was found that ethanolic extract of the flowers of E. coronaria, at a dose of 400 mg/kg body weight significantly reduced the oedema volume, which was comparable to standard drug diclofenac sodium. The flowers of the plant exhibited significant analgesic and anti-inflammatory activity, thereby justifying their use in traditional system of medicine.

INTRODUCTION: Ervatamia coronaria is a glabrous, evergreen, dichotomously branched shrub belonging to the family Apocynaceae. It is found distributed in upper Gangetic plain, Garwal, East Bengal, Kharia Hills, Assam and in Karnataka. It is commonly cultivated in the gardens as an ornamental plant and flowers throughout the year.Traditionally the plant is used to treat various ailments. In Ayurveda, the roots are described as acrid, bitter, astringent to the bowels, alexipharmic, useful in Kapha, biliousness and diseases of blood.

It is also used as emmenagogue, aphrodisiac, purgative, tonic to the brain, liver and spleen. The charcoal obtained from the roots is used in opthalmia. Roots when chewed relieve toothache. Aqueous extract of the plant is used to kill the intestinal worms. In western India, the latex has the reputation of being very cooling and is applied to the wounds to prevent the inflammation 1, 2.

The plant is known by various names in different languages.

Plant material: The plant was authenticated by Prof. Gopala Krishna Bhat, Department of Botany, Poornaprajna College, Udupi, Karnataka, India. A voucher specimen (No. 101a) was deposited in N.G.S.M. Institute of Pharmaceutical Sciences, Mangalore.

Preparation of the ethanol extract: The fresh flowers were collected from Mangalore, India during the month February- May and dried by means of a natural sundry. The dried flowers were powdered and soaked in ethanol (95%) and kept aside for four days. After four days the ethanol layer was decanted off. The process was repeated for four times. The filtrate was then concentrated and solvent was evaporated under reduced pressure in a rotary evaporator. The crude extract was referred to as EEC. The crude extract was suspended in 1% Tween-80, to required concentrations.

Animals: Wistar albino male rats weighing between 150-200g and Swiss albino male mice weighing between 20-30g were obtained from KSHEMA, Deralakatte, Mangalore, Karnataka, India, and maintained under standard conditions. Animals were housed in standard cages with controlled temperature (23 ± 3.0°C) and a 12 h light /dark cycle   with   free   access to food (Hindustan Lever Co. Bombay, India) and water ad libitum. The Principles of Laboratory Animals Care (NIH publication no. 85-23) guidelines and procedures were used in this study.The study was permitted by the Institutional Animal Ethical committee with (Reg. no. KSHEMA/ACE/050/2007) and all efforts were made to minimize animal sufferings and to reduce the number of animals.

Acute toxicity was performed for ethanol extract according to the acute toxic classic method (as per OECD guidelines). For the assessment of analgesic activity, 100, 200, 400 mg/kg body weight were taken for the study.

Acetic acid induced Writhing method: Pain is produced by injection of acetic acid into peritoneal cavity of mice. The animals react with characteristic movements such as extension of hind limb, abdominal constriction and trunk twisting movement, which is called writhing.

The test was carried out using the technique of Koster et al 3. In this method male albino mice weighing between 25-30 g body weights were selected for the study. The animals were divided into 5 groups of 6 animals in each group.

After 30 min of drug administration 1ml/100g body weight of 0.6% v/v acetic acid solution injected i.p in all the groups to induce the characteristic writhing. The number of writhing occurring between 0 and 30 min after the acetic acid injection was recorded and the percentage inhibition was calculated by using the formula. The response of extract treated group was compared with the control. Aspirin (50 mg/kg body weight p.o.) was used as standard drug.

Group I Animals serve as control and received vehicle orally.

After 30 min. of above treatment, an inflammatory edema was induced in the left hind paw by injection of 0.1 ml of 1% of carrageenan solution in the planter tissue of the paw of all the animals.

A mark was made on both the hind paws just below the tibio-tarsal junction. The right paw served as a reference to non-inflammed paw for comparison. The initial paw volume was measured plethysmo-graphically immediately before subplanter injection. The relative increase in paw volume was measured in control, standard and treated group at 4h after carrageenan injection. The percentage increase in the paw volume over the initial reading was calculated. This increase in the paw volume in the animals treated with the standard drug and the different doses of EEC were compared with increase in paw volume of untreated control animals. The percentage inhibition of edema volume was calculated using the formula

Where Vt and Vc were edema volume in the drug treated and control groups, respectively.

TABLE1: ANALGESIC ACTIVITY OF ETHANOLIC EXTRACTS OF THE FLOWERS OF E. CORONARIA

TABLE 2: ANTI-INFLAMMATORY ACTIVITY OF THE ETHANOLIC EXTRACTS OF THE FLOWERS OF E. CORONARIA (EEC) 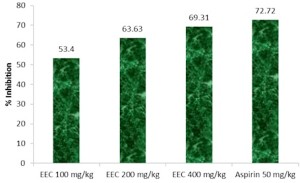 FIGURE1: ANALGESIC ACTIVITY OF ETHANOLIC EXTRACTS OF THE FLOWERS OF E. CORONARIA (EEC). 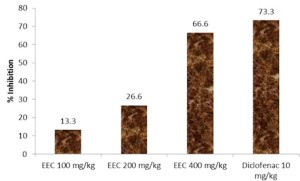 FIGURE2: ANTIINFLAMMATORY ACTIVITY OF THE ETHANOLIC EXTRACTS OF THE FLOWERS OF E. CORONARIA.(EEC)

The anti-inflammatory activity of EEC was investigated by using carrageenan induced acute inflammation model and cotton pellet granuloma model in rats. Carrageenan induced inflammatory process is believed to be biphasis 6. The initial phase seen at the first hour is attributed to the release of histamine and serotonin 7.

The second accelerating phase of swelling is due to the release of prostaglandin, bradykinin and lysozyme.  It has been reported that the second phase of edema is sensitive to both clinically useful steroidal and non-steroidal anti-inflammatory agents 8. The anti-inflammatory activity of extract-suggest that they could have acted by affecting kinin, prostaglandin, bradykinin and lysozyme synthesis. Presences of terpenoids, glycosides, sterols and flavonoides in the plant have been found to exert active anti-inflammatory activity 9, 10.

ACKNOWLEDGEMENT: The authors are grateful to Nitte Education Trust, Mangalore, for providing the necessary facilities to carry out this study.