The leaf of the plant Lawsonia inermis was examined for analgesic and anti-diarrhoeal properties. From the study of analgesic activity it was found that ethanol extract at a dose of 500 mg/kg exhibited no significant (p<0.3) inhibition of writhing reflex (28.45 % inhibition) while the inhibition of standard drug diclofenac sodium showed 82.7 % inhibition at a dose of 25 mg/kg body weight. The findings suggested that the leaf extract of Lawsonia inermis possessed anti-diarrhoeal activity at the dose of 500 mg/kg body weight compared to the control group and offered about 1.398 of the mean latent period for diarrhoeal episode to ensue and the result was significant (P<0.002).

INTRODUCTION: ‘Henna’ or ' Mehendi' is a widely used plant that is used to create temporary tattoos mainly to the hands and feet of women. Not only that, traditionally this plant has been used for its medicinal qualities in this subcontinent from a very ancient period. Some common traditional therapeutic uses of this plant are as astringent, anti-hemorrhagic, cardiotonic, hypotensive, anti-oxidant and sedative. It has also been used as a folk remedy against amoebiasis, headache, jaundice, and leprosy. Lawsonia inermis is the scientific name of this plant which belongs to the family Lythraceae.

The plant is a perennial shrub native to North Africa, Asia and Australia, is naturalized and cultivated in the tropics of America, Egypt, India, and parts of the Middle East 1. The plant has a grayish-brown bark. Leaves of the plant are 2-3 cm long and 1-2 cm wide. Alignment of leaves are opposite, sub-sessile, elliptic or broadly lanceolate, entire, acute or obtuse. Flowers are small white or rose colored and fragrant and numerous in numbers. The main chemical constituents of the plant are mannite, tannic acid, mucilage and gallic acid, but the major bioactive constituent is lawsone. Chemically lawsone is 2-hydroxynaptho quinone 2. Flowers yield an essential oil (0.01-0.02 %) with brown or dark brown color, strong fragrance and consist mainly of α- and β- ionones; a nitrogenous compound and resin. Seeds contain proteins (5.0 %), carbohydrates (33.62 %), fibers (33.5 %), fatty oils (10-11 %) composed of behenic acid, arachidic acid, stearic acid, palmitic acid, oleic acid and linoleic acid 3.The present study was performed investigate the scientific basis of   the traditional use of this plant as an analgesic and anti-diarrhoeal.

Collection and Identification of the Plant Material: The plant Lawsonia inermis( Family-Lythraceae) was collected from Khulna, Bangladesh in December 2007 and was identified by the experts of Bangladesh National Herbarium, Mirpur, Dhaka (Accession number-32098) and a voucher specimen of this collection was also deposited.

Drying and Grinding: The collected plant parts were separated from undesirable materials or plants or plant parts and then were washed with water. They were air dried for seventeen days. The plant parts were ground into a coarse powder with the help of a grinder (Capacitor start motor, Wuhu motor factory, China). The powder was stored in an airtight container and kept in a cool, dark and dry place until analysis commenced.

Cold Extraction (Ethanol Extraction): About 448 g of powered material was taken in a clean, flat-bottomed glass container and soaked in 1700 ml of 95% ethanol. The container with its contents was sealed and kept for a period of 19 days accompanying daily shaking and stirring. The whole mixture then underwent a coarse filtration by a piece of clean, white cotton material. Then it was filtered through Whatmann filter paper number 1 (Bibby RE200, Sterilin Ltd., UK).

Evaporation of the Solvent: The filtrate (ethanol extract) obtained was evaporated by using a rotary evaporator until the solvent evaporated.  It rendered a concentrate (15 g) of greenish black color. The concentrate was designated as crude extract of ethanol. Therefore,

Study Design for Analgesic Activity: The study of analgesic activity was performed by inducing acetic acid induced writhing in mice 4, 5. The acetic acid induced writhing method is an analgesic behavioral observation assessment method that demonstrates a noxious stimulation in mice. 0.7% acetic acid solution was injected intraperitoneally and then the animals were observed for specific contraction of body referred as ‘writhing’.

Experimental Animal: Male and female young Swiss-Albino mice, aged 4-5 weeks, average weight of 20-28 g were used for the experiment. The mice were purchased from the Animal Research Branch of the International Centre for Diarrhoeal Disease and Research, Bangladesh (ICDDR, B).  Animals were housed in colony at room temperature and had free access to water and food for one week for adaptation after their purchase and fed ICDDR, B formulated rodent food and water ad libitum. All the experiments were conducted in an isolated and noiseless condition.

Experimental animals were randomly selected and divided into three groups denoted as group-I, group-II, and group-III, consisting of 5 mice in each group. Each group received a particular treatment i.e. control, positive control, and the extract. Each mouse was weighed properly and the doses of the test samples and control materials were adjusted accordingly.

To prepare suspension of the test samples at the dose of 500 mg/kg body weight, 250 mg sample was measured. The extract was triturated in unidirectional manner by the addition of small amount of tween 80. After proper mixing of extract and tween 80, distilled water was slowly added. The final volume of the suspension was made 5 ml. To stabilize the suspension, it was shaken well by vortex mixture.

For the preparation of 0.7% acetic acid solution, 7 ml glacial acetic acid was mixed with 100 ml of distilled water.

Distilled water (for control), sample (for test) and diclofenac sodium (for positive control)   was given orally to group I, group II & group III respectively by means of a feeding needle. Then after thirty minutes, acetic acid solution (0.7%) was administered intraperitoneally in all groups.

A thirty minutes interval was given to ensure proper absorption of the administered substances. After an interval of 5 minutes, which was given for absorption of acetic acid, number of squirms (writhing) was counted for 15 minutes. Experimental profile of analgesic activity is given in table 1.

TABLE 2: EFFECTS OF THE CRUDE EXTARCT OF THE LEAF OF Lawsonia inermis AT THE DOSE OF 500 mg/kg BODY WEIGHT ON ACETIC ACID INDUCED WRITHING IN MICE

Anti-diarrhoeal Activity: Diarrhoea was defined by the presence of stool or any fluid material that stained the absorbent paper placed beneath the cage.  Time taken before the first defecation was the ‘Latent period’. The total count of stool and latent period of test group were compared with positive control group. Anti-diarrhoeal agent would increase the latent period and decrease total stool count.

Anti-diarrhoeal activity of the ethanol extract of leaf of Lawsonia inermis was tested by using the model of castor oil induced diarrhoea in mice 6, 7. Castor oil, which was used to induce diarrhoea in mice, mixed with bile and pancreatic enzymes and liberated ricinoleic acid from the triglycerides upon oral administration. Most of the ricinoleic acid remained in the intestine and produced its anti absorptive or secretory effect. The ricinoleic acid thus liberated readily formed ricinoleate salts with sodium and potassium in the lumen of the intestine. The salt formed as such behaved like a soap or surfactant within the gut and at the mucosal surface. Most agreed view was that ricinoleate salts stimulated the intestinal epithelial cell’s adenyl cyclase 8 or released prostaglandin 9. The extract caused an increase in latent period i.e., delayed the onset of diarrhoeal episode and decreased the frequency of defecation as well as the number of stool.

Study Design for Anti-diarrhoeal Activity: The mice were all screened initially by giving 0.5 ml of castor oil and only those showing diarrhoea were selected for the final experiment. The test animals were randomly chosen and divided into three groups having five mice in each. Of the experimental groups, group-I or the control received only distilled water containing 1% Tween-80. Group-II or the positive control received Loperamide (anti-diarrhoeal drug) at a dose of 50 mg/kg body weight as oral suspension. The test groups were treated with suspension of leaf extract of Lawsonia inermis at the oral dose of 50 mg/kg body weight.

Anti-diarrhoeal activity was studied on castor oil induced diarrhoea. To prepare suspension of the test samples at the dose of 500 mg/kg per body weight 250 mg of samples were taken and the sample was triturated in unidirectional manner by the addition of small amount of 1% tween 80. After proper mixing of extract and tween 80, distilled water was slowly added. The final volume of the suspension was made 5.0 ml. The mice were fed with the samples 40 minutes prior to the oral administration of castor oil at a dose of 0.5 ml per mouse. Individual animals of each group were placed in separate cages having adsorbent paper beneath and examined for the presence of diarrhoea every hour in four hours study after the castor oil administration.

Number of stools or any fluid material that stained the adsorbent paper were counted at each successive hour during the 4 hour period and were noted for each mouse. The latent period of each mouse was also counted. At the beginning of each hour new papers were placed for the old ones.  A numerical score based on stool consistency was assigned as follows: normal stool=1 and watery stool=2. Experimental profile of anti-diarrhoeal activity is given in table 3.

TABLE 3: EXPERIMENTAL PROFILE OF THE OBSERVATION OF THE EFFECT OF ETHANOL EXTARCT OF LEAF OF Lawsonia inermis ON CASTOR OIL INDUCED DIARRHOEA IN MICE

RESULTS AND DISCUSSION: From the study of analgesic activity, it was found that ethanol extract at a dose of 500 mg/kg body weight exhibited no significant inhibition of writhing reflex (28.45 %) while in case of the standard drug diclofenac sodium; inhibition was found to be 82.7 % at a dose of 25 mg/kg body weight (Figure 1). From statistical analysis of the analgesic activity (Table 4) it was observed that analgesic activity of the ethanol extract of the leaf of Lawsonia inermis was not significant (p<0.3) compared to the standard drug diclofenac sodium (p< 0.001).

TABLE 4:  STATISTICAL EVALUATION OF THE RESULTS OF ANALGESIC ACTIVITY 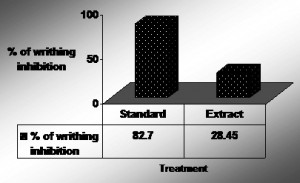 FIG. 1: EFFECT OF ETHANOL EXTRACT OF THE LEAF OF LAWSONIA INERMIS ON THE INHIBITION OF WRITHING COMPARED TO THE STANDARD DRUG DICLOFENAC SODIUM

The findings of anti-diarrhoeal examination of leaf extract suggested that the leaf extract showed a marked anti-diarrhoeal activity in castor oil induced diarrhoea in mice. At the dose of 500 mg/kg body weight, the ethanol extract of leaf of Lawsonia inermis compared to the control group, offered about 1.398 of the mean latent period for diarrhoeal episode to ensue and the result was significant (p<0.002)(Table 5). The decreased frequency of defecation and increase mean latent period of test group than control group and compared region with positive control group indicated that Lawsonia inermis possessed marked antidiarrhoeal activity.  t-test of these responses (Table 6 and Figure 2) showed that the results of anti diarrhoeal examinations were significant throughout the observation period. 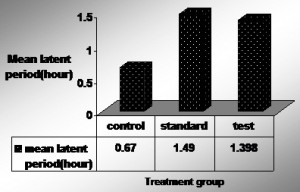 CONCLUSION: The ethanol extract of L. inermis showed moderate analgesic activity and significant anti-diarrhoeal activity. These supported the traditional uses of this plant for healing pain, loose motion, fever, etc. The plant can be further screened against various diseases in order to find out its unexplored biological effects and can be a potential source of biologically effective and therapeutically important drug substance.