ABSTRACT: The aim of present study was to examine the analgesic, neuropharmacological and cytotoxic effects of the methanolic extract of the barks of Dillenia indica Linn. The analgesic activity was evaluated for its central and peripheral pharmacological actions using tail-flick method and acetic acid-induced writhing test in mice respectively. The extract, at the dose of 100, 200 and 400 mg/kg body weight, produced a significant increase in pain threshold in tail-flick method in a dose dependent manner. In acetic acid-induced writhing test, the extract at 400 mg/kg dose showed a maximum of 46.0 % inhibition (p <0.001) of writhing reaction compared to the reference drug Diclofenac-Na (78.50%). The extract was also investigated for its neuropharmacological action using hole-cross and open field test. The extract displayed dose dependent suppression of motor activity and exploratory behavior in mice in the tested models. The results of the study indicate that the plant possesses strong analgesic potential which might be linked to inhibition of central mechanism of pain. However, studies are required on higher animal model and subsequently on human subjects to prove its clinical efficacy as an analgesic, CNS depressant and cytotoxic agent.

Dillenia indica Linn, analgesic activity, neuropharmacological action, cytotoxic activityINTRODUCTION: Dillenia indica Linn. (Family: Dilleniaceae) is an evergreen tree widely grown in tropical forests in the Bangladesh. Originally from Indonesia, this tropical tree is now found from Bangladesh, India and Nepal to China. The common names include Chulta (Bengali, Hindi), Bhavya (Sanskrit) and Elephant apple (English) 1. The leaves, bark, stem and fruits of the plant are used in traditional medicine for a long time

The fruit juice of this plant has cardiotonic effect, used as cooling beverage in fever and also employed in cough mixture 2. It also helps in relieving flatulence. Juice of the leaves, fruits and the bark is given orally for treatment of diarrhoea and Cancer. The review of various literature showed that the leaves, bark, fruits or the various part of the D. indica (Chalta) have extensive medicinal properties 3.

The solvent extracts of fruits of D. indica could be considered a potential source of natural antioxidant 4. CNS depressant activities and anti-inflammatory activity in mice and antimicrobial activity were found from the alcoholic extract of the leaves of D. indica 5, 6. The methanolic leaf extract shows anti-inflammatory activity in carrageenan induced paw edema and acetic acid-induced capillary permeability methods 7. Dillenia indica barks contained large amount of phenolics and possessed potent antioxidant property 8. Considering the traditional uses of D. indica plant parts, barks can be the source of many modern medicines. This paper was intended to investigate the CNS depression, analgesic and cytotoxic activity of methanolic bark extract of Dillenia indica.

The barks of Dillenia indica L. were collected from Bheramara, Kushtia, Bangladesh. The plant sample was identified by taxonomist and a voucher specimen was given from National herbarium, Dhaka, Bangladesh (voucher specimen no: DACB 34548) which was kept for further references.

The fresh barks were collected, cut into small pieces and dried at room temperature for several days. Then the barks were powdered using mixer grinder. The powder was continuously extracted using Soxhlet extractor with 80% methanol at 55°C. The solvent was completely removed and the dried crude extract thus obtained was used for investigation.

For the experiment male Swiss albino mice, 3-4 weeks of age, weighing between 20-25 gm, were collected from the animal research branch of the International Center for Diarrheal Disease and Research, Bangladesh (ICDDR, B). Animals were maintained under standard environmental conditions (temperature: (24.0±1.0◦C), relative humidity: 55-65% and 12hrs light/12 hrs dark cycle) and had free access to feed and water ad libitum. The animals were acclimatized to laboratory condition for one week prior to experimentation 9.

The freshly prepared crude extract was qualitatively tested for the presence of chemical constituents. Phytochemical screening of the extract was performed using the following reagents and chemicals: Alkaloids with Dragendorff’s reagent, flavonoids with the use of Mg and HCl; tannins with ferric chloride and potassium dichromate solutions and saponins with ability to produce stable foam and steroids with Libermann- Burchard reagent. Gum was tested using Molish reagent and concentrated sulfuric acid; reducing sugars with Benedict’s reagent. These were identified by characteristic color changes using standard procedures 10, 11.

The analgesic activity of the samples was studied using acetic acid-induced writhing model in mice 12. Test samples and vehicle were administered orally 30 min before intraperitoneal administration of 0.7% acetic acid but Diclofenac-Na (reference standard drug) was administered intraperitoneally 15 min before injection of acetic acid (Fig.1). After an interval of 5 min, the mice were observed for specific contraction of body referred to as ‘writhing’ for the next 10 min 13 (Fig.2). 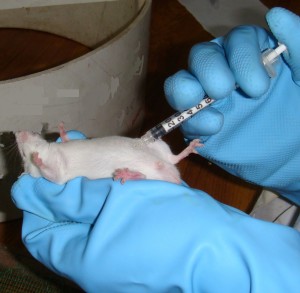 FIG.1: INJECTING MICE THROUGH THE INTRA-PERITONEAL ROUTE WITH ACETIC ACID

The procedure is based on the observation that morphine like drugs selectively prolongs the reaction time of the typical tail withdrawal reflex in mice 14. The animals were treated as discussed above. 1 to 2 cm of the tail of mice was immersed in warm water kept constant at 55°C (Fig. 3). The reaction time was the time taken by the mice to deflect their tails. The first reading was discarded and the reaction time was recorded as a mean of the next three readings. A latency period of 20 s was defined as complete analgesia and the measurement was then stopped to avoid injury to mice. The latent period of the tail-flick response was determined before and 0, 30, 60 and 90 min after the administration of drugs. 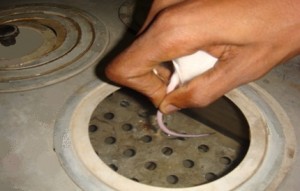 This experiment was carried out as described by Gupta et al., 1971 16. The animals were divided into control, positive control, and test groups containing five mice each. The test group received D. indica L. bark extract at the dose of 100,200 and 400 mg/kg body weight orally whereas the control group received, vehicle (1% Tween 80 in water). The floor of an open field of half square meter was divided into a series of squares each alternatively colored black and white. The apparatus had a wall of 40 cm height. The number of squares visited by the animals was counted for 3 min at 0, 30, 60, 90, and 120min after oral administration of the test drugs.

The brine shrimp lethality bioassay was used to predict the cytotoxic activity 17, 18. For cytotoxicity screening, DMSO solutions of the plant extractives were applied against Artemia salina in a 1-day in vivo assay. For the experiment, 5 mg of each of the extracts was dissolved in DMSO. Solutions of varying concentrations such as 320, 160, 80, 40, 20, 10, 5, 2.5 and 1.25μg/mL were obtained by serial dilution technique. The solutions were then added to the pre-marked test tubes containing 10 live brine shrimp nauplii in 5 ml simulated seawater. After 24 h, the test tubes were inspected using a magnifying glass and the number of survived nauplii in each vial was counted 19. From this data, the percent of lethality of the brine shrimp nauplii for each concentration was calculated. An approximate linear correlation was observed when logarithm of concentration versus percentage of mortality was plotted on the graph paper and the values of LC50 were calculated using Microsoft Excel (Persoone et al., 1979).

FIG. 4: HOLE CROSS (a) AND OPEN FIELD (b) TEST FOR NEUROPHARMACOLOGICAL ACTIVITY ON MICE

As summarized in Table 2 the number of hole crossed from one chamber to another by mice of the control group was similar from 30 minutes to 120 minutes Fig.3(a). Hole cross test of D. indica showed significant decrease of movement from its initial value at 0 to 120 minutes. The result was statistically significant (Fig. 5 and 6).

In the open field test D. indica bark extract showed significant dose dependent decrease of movement from its initial value at zero minute to 120 minutes (Table 3). The result was statistically significant (Fig. 7 and 8). 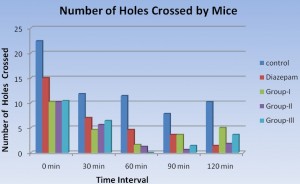 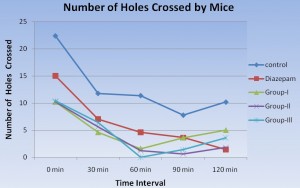 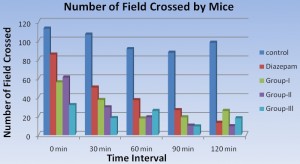 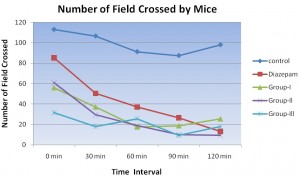 Table 4 and 5 shows the effects of the extract of D. indica on acetic acid-induced writhing in mice. The oral administration of both doses of D. indica extract significantly inhibited writhing response induced by acetic acid in a dose dependent manner (Fig. 9). 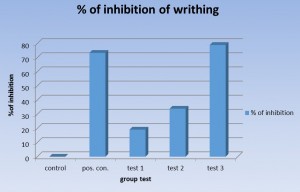 The analgesic effect of the methanolic leaves extract of D.indica demonstrated that oral administration of methanolic extract (100, 200 and 400mg/kg) exerts significant (p < 0.001) prolongation in the response latency time to the heat stimulus. The results were comparable to the standard drug Diclofenac-Sodium at 50mg/kg (Fig. 10). 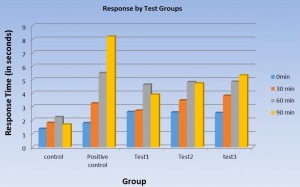 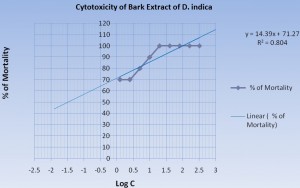 CONCLUSION: The results of phytochemical screening revealed that the methanolic leaves extract of Dillenia indica L. contained carbohydrates, tannins, flavonoids, saponins, steroids, alkaloids and glycosides. The analgesic, CNS depressant and cytotoxic properties of Dillenia indica observed in animal model might, in part, be due to the presence of such compounds. The result also suggests a rationale for the traditional uses of this plant and justifies its use in folklore medicine for the management of painful conditions. However, studies are required on higher animal model and subsequently on human subjects to prove its clinical efficacy as an analgesic, CNS depressant and cytotoxic agent.

ACKNOWLEDGMENTS: The authors would like to acknowledge Department of Pharmacy, Stamford University and BCSIR Laboratories, Dhaka, Bangladesh for providing facility and moral support to conduct the research.