ANALGESIC, PHYTOCHEMICAL AND ACUTE TOXICITY EVALUATION OF THE METHANOL EXTRACT OF THE LEAVES OF PTEROCARPUS SANTALINOIDES- FAMILY FABACEA

ANALGESIC, PHYTOCHEMICAL AND ACUTE TOXICITY EVALUATION OF THE METHANOL EXTRACT OF THE LEAVES OF PTEROCARPUS SANTALINOIDES- FAMILY FABACEA

Pterocarpus is based on the Greek words ‘pteran’ meaning a wing and, ‘karpos’ meaning’ fruit. The specific epithet ‘santalinoides’ refers to its likeness to P. santalinus found in Asia. 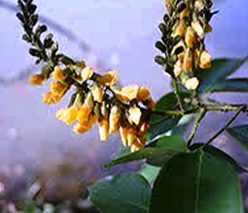 Collection and Identification of Plant Material: Young fresh leaves of Pterocarpus santalinoides were collected in Ogidi, Idemili North local government area of Anambra State in July, 2011, during the rainy season and was identified by Dr. Ezugwu, Department of Pharmacognosy, Faculty of Pharmaceutical Sciences, University of Nigeria, Nsukka.

Methanolic Extraction: Fresh leaves of Pterocarpus santalinoides family Fabaceae were dried at ambient temperature until their weight which was measured at intervals was about the same. The dried leaves were pulverized using laboratory miller, 250g of the powder was macerated in 500ml of methanol and were placed on a mechanical shaker for 48 hours, the extract was filtered using clean white handkerchief, then the filtrate was further filtered using No.1 Wattman filter paper. The filtrate was concentrated using rotary evaporator. The extract was stored in the refrigerator for future use.

Test for Reducing Sugar: 0.1g of the leave extract was shaken vigorously with 5ml of distilled water and filtered. The filtrate was divided and used for the following test.

Test for Alkaloids: 20mls of 5% sulphuric acid in 50% ethanol was added to about 2g of the methanolic extract and heated on a boiling water bath for 10minutes, cooled and filtered. 2ml of the filtrate was tested with a few drops of Mayer’s, Dragendroff’s, Wagner’s reagent and 1% picric acid. The remaining filtrate was placed in 100ml separating funnel and made alkaline with dilute ammonia solution. The aqueous alkaline solution was separated and extracted with two 5ml portion of dilute sulphuric acid. The Mayer’s, Dragendroff’s, Wagner’s and picric acid respectively. The extract gave milky, brick red, reddish brown and yellow precipitate with one drop each of the reagents and therefore showing the presence of alkaloid.

Test For Glycosides: About 5ml of a mixture of equal part of Fehling’s solution of the extract, dissolved in water and then heated or a water bath for few five minutes. A brick red precipitate shows the presence of glycosides.

Test for Saponin: About 20ml of water was added to 0.25g of the methanolic extract of the leave in 100ml beaker and boiled gently on a water bath for two minutes. The mixture was filtered hot and allowed to cool and the filtrates used for the following tests.

Test for Tannins: About 0.5g of the extract was boiled with 25ml of water, filtered and used for the following test.

Test for Flavonoids: 5ml of ethyl acetate were added to 0.1g of the extract and heated on a water bath for 3 minutes. The mixture was cooled, filtered and the filtrate used for the following test.

Test for Resins: The plant extract was dissolved in 3ml acetone and 3ml concentrated hydrochloric acid was added. This mixture was heated in a water bath for 30 minutes.  A pink color which changes to red indicates the presence of resins.

Test for steroids and triterpenoids: About 9 ml of ethanol was added to 1 g of the extract it was refluxed for a few minutes and filtered. The filtrate was concentrated on a boiling water bath. 5 ml of hot distilled water was added to the concentrated solution, the mixture was allowed to stand for 1 hour and the waxy matter was filtered off. The filtrate was extracted with 2.5 ml of chloroform using separating funnel. To 0.5 ml of the chloroform extract in a test tube was carefully added 1 ml of conc.  H2SO4 to form a lower layer. A reddish brown interface shows the presence of steroids.  0.5 ml of the chloroform was evaporated to dryness on a water bath and heated with 3 ml of the concentrated sulphuric acid for 10 minute on a water bath. A grey color indicates the presence of terpenoids.

Test for Carotenoids: A measured weight of each sample was homogenized in methanol using a laboratory blender. A 1:10 (1%) mixture was used. The homogenate was filtered to obtain the initial crude extract.20ml of ether were added to the filtrate to take up the carotenoid mixed well and then treated with 20ml of distilled water in a separating funnel. The other layer was recovered and evaporated to dryness at low temperature (35-500C) in vacuum desiccators. The dry extract was then saponified with 20ml of ethanolic potassium hydroxide and left over night in a dark cupboard.

The next day, the carotenoid were taken up in 20ml of ether and then washed with two portions of 20ml distilled water. The carotenoid extract (ether layer) was dried in a dessicator and then treated with a light petroleum (petroleum spurt) and allowed to stand overnight in a freezer (-100C). The next day, the precipitated steroid was removed by centrifugation and the carotenoid extract was evaporated to dryness in a weighed evaporation dish, cooled in a desiccator and weighed. The weight of carotenoid was determined and expressed as a percentage of the sample weight.

Test for Anthocyanins: This was done gravimetrically by the method of Harborne 4.

TABLE 1: RESULT OF THE PHYTOCHEMICAL CONSTITUENTS

Pterocapus santatinoides extract is non-toxic and caused no death or signs of acute-intoxication in mice at a dose up to 5000 mg/kg administered orally.

The extract of Pterocarpus santalinoides significantly increased the time the albino rats can stay comfortably on the hot plate in a dose dependent manner 7.

At a dose of 300mg/kg, the effect of extract was comparable to that of the standard drug, Aspirin (100mg/kg). [8] Analgesic activity of extract may be associated with the presence of steroids; a phytochemical constituent which it contains in abundant. Steroids are significant in the treatment of inflammation and pain is a sign associated with inflammation 9- 11.