INTRODUCTION:Nanotechnology has explored the medical applications of nanoparticles in several ways like imaging 1, sensing 2, targeted drug delivery 3, gene delivery systems 4, artificial implants 5 and cancer 6.  In the past, silver was used for a variety of clinical conditions including epilepsy, venereal infections, acnes and leg ulcers.

Although some centers still use these solutions, they have been shown to be very impractical to use on large wounds or for extended time periods due to instability. With nanotechnology, the availability of silver nanoparticles has enabled the use of pure silver to achieve a rapid growth in medical practice. Since the size, shape and composition of silver nanoparticles can have a significant effect on their efficacy; extensive research has gone into synthesizing and characterizing silver nanoparticles. The application of nanosilver can be broadly divided into diagnostic and therapeutic uses. Some evidence proved the safety of the application of nano structured materials 7.

In the recent years nanoparticles synthesis using plant sources are gaining more interest, speciﬁcally the use of various parts of the plants such as leaf 9-15, corn 16, tuber 17, bark 18 and buds 19. Reported studies related to biological syntheses of SNPs especially using medicinal plants have been promising 10, 12, 18, 20-22. The methods using plant extracts involve phytochemicals such as terpenoids 22, ﬂavonoids 19, phenol derivatives 23 plant enzymes (hydrogenases, reductases, quinones) and their derivatives, di-hydric phenols 21 and so on act as reductants in the presence of metal salt.

Silver has come up but silver nanoparticles have been proved to be most effective as they have good antimicrobial efficacy against bacteria, viruses, and other eukaryotic microorganisms 24. The broad antibacterial activity of nano silver reduces patient infection, dependence on antibiotic use, and associated costs. There is room for improvement in stabilizing and prolonging the antibacterial effects of nano silver coatings for medical applications to prevent infection and inflammation.

Finally, with the widespread adoption of nano silver, several concerns about toxicity remain and need to be addressed 25. The use of silver has been severely limited by the toxicity of silver ions to humans. However, nanotechnology has facilitated the production of smaller silver particles with increasing large surface area to volume ratios, greater efficacy against bacteria 26 and, most importantly, lower toxicity to humans 27. The mechanisms underlying the impressive biological properties of nano silver are still not understood and this is a priority for future research in vivo 25. Moreover, nano silver exhibits remarkable biological properties, such as antiviral activities 27, 29 and anthelmintic activity 30. Nanoparticles can be used effectively in other materials including hydrogels 31. Generally, antimicrobial properties of (bio) materials may be accomplished by introducing agents such as silver 32 or one or more antibiotics into the materials. Microbes are subsequently killed following contact with the materials or through leaching of the antimicrobial agents into the body environment.

Sara indica plant has been greatly used as traditional medicine for several problems, such as fever, leucorrhoea, menorrhagia, dysfunctional uterine bleeding, bleeding haemorrhoids etc. It is known to be sacred and is used in religious ceremonies. The present study shows that hydrogels of silver nanoparticles using Saraca indica bark have analgesic potential.

Animals: Albino rats (Wistar) weighing 150-200g of either sex were used for the study. They were procured from the animal house of NIET, Greater Noida. The animals were acclimatized for one week under laboratory conditions. They were housed in polypropylene cages and maintained at 27oC±2°C and 12 hrs dark/light cycles. They were fed with standard rat feed and water ad libitum was provided.  The litter in the cages was renewed thrice a week to ensure hygenicity and maximum comfort for animals. Ethical clearance for handling the animals was obtained from the Institutional Animals Ethical Committee prior to the beginning of the project work bearing the protocol number 1121/ac/CPCSEA/07/NIET.

The experimental animals were grouped into four containing 6 animals each and treated as follows:

Synthesis of silver nanoparticles using aqueous extract of Saraca indica bark: Saraca indica bark was purchased from local market and washed with deionized water and dried in dark. 100 ml double distilled water was added to the flask containing 5 g finely grinded dried bark and was exposed to microwave for 3 min to make the aqueous extract of bark rapidly and suppress the enzymes present in the solution. Then the raw extract obtained was filtered in hot condition to remove fibrous impurities. The resultant clear extract was used for the synthesis of silver nanoparticles.

For reduction of Ag+ ions, 10 ml aqueous Saraca indica bark extract was added to 50 ml of 10-3 M aqueous AgNO3 solution and the solution mixture was exposed to microwave radiation for 300 sec at a fixed frequency of 2450MHz and power of 450 watts. Periodically, aliquots of the reaction solution were removed and subjected to UV-vis spectroscopy measurements. The synthesized nanoparticles were centrifuged at 8000 rpm for 10 min and subsequently re-dispersed in deionized water twice to get rid of any unbound biological molecules.

The transmission electron microscopy (TEM) image of the sample was obtained using FEI Philips Morgagni 268D instrument operated at 100 kV. TEM samples of the aqueous suspension of silver nanoparticles were prepared by placing a drop of the suspension on carbon-coated copper grids and the films on the TEM grids were allowed to stand for 2 min, after which the extra solution was removed using a blotting paper and the grid was allowed to dry prior to measurement.

For XRD measurements, the synthesized nanoparticles were centrifuged at 8000 rpm for 10 min and subsequently re-dispersed in deionized water twice to get rid of any unbound biological molecules. The solid residue layer containing silver nanoparticle was redispersed in sterile deionised water for three times to remove unattached biological components to the surface of nanoparticles that are not responsible for bio-functionalization or capping. The pure residue is dried perfectly in an oven overnight at 60oC.

Preparation of HPMC hydrogel: The hydrogels were prepared by cold suspension method.  HPMC (Methocel K4) 3%w/v was slowly dispersed in water/aqueous bark extract/aqueous silver nanoparticles prepared using Saraca indica bark with continuous stirring till gel was formed. It was kept overnight to swell, then filled in tubes and stored at 4 degree C until further use, 0.2%w/v Methyl paraben was used as preservative.

RESULTS AND DISCUSSION: As soon as Saraca indica bark extract was mixed in aqueous solution of silver nitrate, the reduction of pure Ag+ ions to Ag0 was monitored by measuring UV-vis spectrumof the reaction media at regular intervals. The colour of silver nanoparticles was seen as dark brownish black, which is due to the excitation of the surface plasmon vibration in metal nanoparticles. UV-vis spectra were recorded as function of reaction time. The metal ions reduction occurs very rapidly. The reaction medium behaves with time kinetics and the intensity of the colour of reaction mixture increased evenly with time of microwave exposure. Absorbance intensity increases steadily as a function of reaction time and it is observed that the surface plasmon peak occurs at 440 nm (Fig. 1). 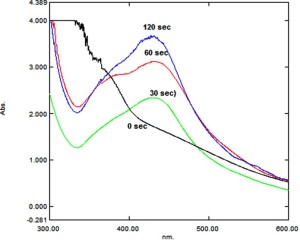 The particle size and shape was confirmed with drop coated TEM grids. The particles were almost in spherical shape with diameters in the range of 5 to 50 nm and are well dispersed (Fig. 3).

The Fourier transform infra-red spectroscopy (FTIR) measurements of synthesized silver nanoparticles were carried out to identify the possible interaction between protein and silver nanoparticles. Results of FTIR study showed sharp absorption peaks located at about 1635 cm-1 and 3430 cm-1 (Fig. 4). 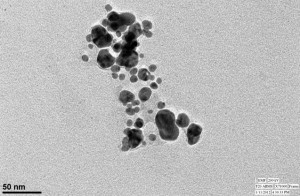 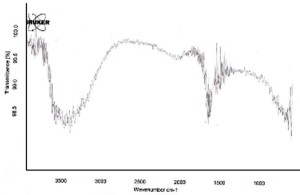 Radiant heat tail-flick test: Testing was performed on the portion of the tail treated with hydrogel, since the analgesic actions of agents administered in this manner are restricted to the exposed part of the tail (proximal regions are not affected) (33). Analgesic activity was checked by digital analgesiometer, INCO Model town, Ambala. This assay is especially useful in examining topical analgesics, since thermal stimulus usually applies to the superficial surface of the skin, and the thermal energy absorbed in the skin is concentrated in the dermal/epidermal junction where nerve terminals are located.

CONCLUSION: Green synthesis of silver nanoparticles from Saraca indica bark extract using a simple, fast and efficient microwave-assisted route of spherical shaped, fcc structure with diameter range of 5 to 50 nm has been envisaged. The formation of silver nanoparticles with the microwave-assistance is the fastest methodology available till today. No chemical reagent or surfactant was required in this synthesis. Colour change occurs due to surface plasmon resonance during the reaction with the ingredients present in the plant bark extract results in the formation of silver nanoparticles which is confirmed by UV-vis, XRD, FTIR and TEM.

Silver nanoparticles, so obtained, were stable for more than 4 months. This current study finds nanoparticles using Saraca indica bark extract in the radiant heat tail-flick assay (a non-inflammatory model of moderate to severe pain), suggesting that it would be an appropriate model to assess the utility of drug in various types of the clinical pain.

ACKNOWLEDGMENTS: I heartly acknowledge Dr. Sangeeta Tiwari, Dr. Sunita Rattan, Dr. B. Shukla and Dr. A. K.Chauhan of Amity University, Noida, UP, India for their support and providing facilities for the fulfilment of this study. I also acknowledge Dr. G.S.Chakraborthy, NIET, Greater Noida for his support.