ABSTRACT: Phymatosorus scolopendria (Burm. F.) Pic. Serm. belongs to the family Polypodiaceae which is commonly known as musk-fern or wart-fern. Medicinally, the experimental plant possesses insect repellent, anti-inflammatory and bronchodilator activity and hence used ethnomedicinally by tribal people, but was not explored for its bioactive compounds. Hence, the objective of this study was to determine the bioactive compounds present in the methanolic extract of Phymatosorus scolopendria by Gas Chromatography-Mass Spectrum. The methanolic extract of the experimental plant revealed the presence of four phytoconstituents, namely dodecanoic acid, 1,2,3-propanetriyl ester, myristic acid vinyl ester, 4-nitrophenyl laurate and hexadecanoic acid, 4-nitrophenyl ester with peak values 8.98, 53.29, 26.91 & 10.82. The predicted biological activities for the present compounds identified when referred in the literature shows antioxidant, antibacterial, antiviral, candidicidal, hypocholestrolemic, antiarthritic, hepatoprotective, mosquito repellent, antimicrobial, anticancer and cosmetics. The compounds were identified by comparing their retention time and peak area with that of literature and interpretation of mass spectra. The research could be continued to find out the therapeutic importance of all the compounds in future.

INTRODUCTION: Pteridophyta (pteron = feather, phyton = plants) are the most primitive vascular plants and are also known as ‘vascular cryptogams’. They appeared on the earth, in the mid-Paleozoic Era during the Silurian Period, which began 438 million years ago. Pteridophytic plants have been used as medicinal plants in many countries. Phymatosorus scolopendria (Burm. F.) Pic. Serm. belongs to the family which is medicinally an important fern.

In Indo-China, Phymatosorus scolopendria fronds are pounded for use as a treatment for boils and filariasis. Whole fronds are placed on beds so as to ward off bed bugs; the young fronds are used for curing chronic diarrhea 1.

In Polynesia, the leaves are pounded and mixed with scrapings from Atuna racemose to make perfume, and also, the mashed fronds are wrapped with Lei (Morinda citradolia), cooked and used as medical bandage 2. In Fiji, leaf juice is used for stomach ache, swollen breasts, and boils 3. The plants are used for the treatment of asthma, cough, and inflammatory diseases 4. Owing to the above mentioned ethnobotanical folklore importance and medicinal values, local usage of this plant finds important in curing diseases. Hence, our main objective of the present study is to identify the Bioactive compounds present in this plant using GC-MS analysis and also its activity of the compounds.

Preparation of Plant Extract: The plant materials were washed, shade dried, and then powdered with the help of a blender. The powder was kept in airtight bottles. 5 g of the powder was extracted through a cold percolation method with 50 ml of methanol. The extracts were filtered by using Whatman no. 1 filter paper, and the solvents were evaporated to make the crude extract.

GC-MS Analysis: The crude methanol extract of P. scolopendria (Burm. F.) Pic. Serm. was subjected to investigation by Perk Elmer GC-MS- (Model Perkin Elmer Clarus 600, USA) equipped with a VF-5 MS fused silica capillary column (30 m × 0.25 mm i.d, film thickness 0.25 µm). Pure helium gas was used as a carrier gas at a constant flow rate of 1 mL/min. Mass transfer line and injector temperatures were set at 250 °C. The oven temperature was programmed at 60 °C for 2 min, then increased to 300 °C for 6.0 min at the rate of 10 °C/min. The samples were injected in split mode as 10:1 ratio.  Structural determination was done by comparison of mass spectral patterns from NIST Library. The GC studies were carried out at IITM SAIF and sophisticated instrumentation facility (SIF), VIT University, Vellore. 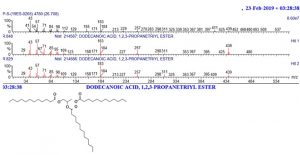 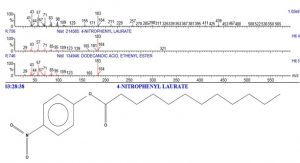 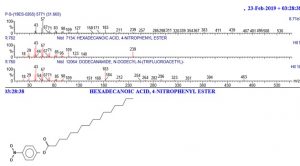 Dodecanoic Acid, 1,2,3-Propanetriyl Ester has a molecular weight of C39H74O6, is also known as Trilaurin which is used as a skin-conditioning agent in cosmetics 5. Dodecanoic acid, 1,2,3-propanetriyl ester compound which was found in the bark extract of Ougeinia oojeinensis showed anti-oxidant, antibacterial, antiviral, hypocholestrolemic activities 6, 7. Docking studies on dodecanoic acid, 1,2,3-propanetriyl ester, protein-ligand complex was identified as a suitable lead molecule for distracting host-seeking behavior of mosquitoes8. Thus, the same compound found in our plant extract might have mosquito repellent activity.

The GC-MS pattern of Ajaswagandhadi lehyam showed very important biomolecules with medicinal activities and one of the compounds was Myristic acid vinyl ester, which is used in cosmetics such as skincare ointments 12. GC-MS works of Sirangala on Rhus succedanea, Rheum emodi and Gardenia gummifera shows the presence of Myristic acid vinyl ester, viny decanoate, tridecanoic acid which acts as powerful antioxidant and chemopreventive agents against prostrate cancer 13.

4-Nitrophenyl laurate has molecular formula C18H24O4N, nitro compounds are rarely found in nature. However, Moses et al., (2013) identified a nitro compound, 1-nitro-2-phenylethane as the major component (63.2%) of the essential oil of Uvaria chamae leaf. This may explain the presence of 4-nitrophenyl laurate in the stem, which was discovered in this study 14.

The methanolic extract of Ipomoea pescaprae was identified by GC-MS analysis. 19 bioactive compounds were found out, among these compound 4-nitrophenyl laurate was found to be the highest peak area of 35.33% and possess potential antibacterial effect. The phytochemicals have several activities as antioxidant, analgesic and anti-inflammatory, antispasmodic, anticancer, antinoci-ceptive, antihistaminic, insulogenic and hypo-glycaemic 15. 14 components were recorded in ethanol extract of Parthenium hysterophorus stem through GC-MS/MS and its antimicrobial activity 16. Among those 4-nitrophenyl laurate showed high peak area of 9.35%, similar compound was found in our experimental plant P. scolopendria methanolic extract. Hexadecanoic acid, 4-nitrophenyl ester has a molecular formula of C22H35O4N, activity has not been identified. There is a list of compounds of acetone extract, humic acids of peat, among them hexadecanoic acid, 4-nitrophenyl ester was also found, which is similar to our compound 17.

In order to better utilize and recover the production waste leaves from the Cinnamomum camphora, pyrolysis- GC/MS technology was used to analyze the possible top value-added components of benzene/ethanol extractives of Cinnamomum camphora leaves.

The main constituents were hexadecanoic acid, 4-nitrophenyl ester (17.336%). The results of function analyses showed that the 350°C pyrolyzate from benzene/ethanol extractives of waste leaves of Cinnamomum camphora is abundant in materials of noble natural medicines and cosmetic 18.

Fatty acid esters are known for their wide Industrial and Pharmaceutical applications such as flavoring agents, additives, intermediates, binders, lubricants in food, cosmetic and plastic industries. Notwithstanding their wide applications, they have raised safety concerns and have been subjected to many toxicity tests15. The present experimental plants were found to possess fatty acid esters in its compounds, and hence this plant could be explored for the cosmetic preparations and its impact using herbal cosmetics.

CONCLUSION: The presence of various phyto-compounds present in the methanolic extract of Phymatosorus scolopendria is responsible for various biological properties. This study will help the upcoming researchers to undertake in-silico and cell-line studies for the potential pharmacological lead compound for drug discovery.