Mallotus tetracoccus (Roxb.) Kurz. is found in Western Ghats of India. Mallotus tetracoccus is one of the medicinally important plants belonging to the family Euphorbiaceae, commonly known as “vatta kanni” in Tamil. In the present study the ethanolic extract of Mallotus tetracoccus has been subjected to GC-MS analysis. The major chemical constituents are Bis (2-ethyl hexyl) phthalate (46.78%), 3-methyl-2-(2-oxypropyl) furan (13.31%), E-8-methyl-9-tetradecen-1-ol acetate (6.63%), Octadecanoic acid, 2-oxo (4.46%) and Longiborneol (2.39%). Thus the extract of Mallotus tetracoccus was characterized by substantial levels of diesters (50%), alcohols (15%), alkanes (3%), sesquiterpenes (5%), terpenoids (13%), fattyacid (5%) and sugars (2.6%). The presence of some of these constituents in the plant extract provides the scientific evidences for the antipyretic, anti-inflammatory and hepatoprotective properties of the plant.

INTRODUCTION: Natural products have played an important role in the development of drugs and drug leads for various diseases including cancer 1. The secondary metabolites from natural sources are good candidates for drug development because being elaborated within the living systems, they are perceived to exhibit more similarities to drugs and show more biological friendliness than totally synthetic drugs 2. Thus a search for anticancer compounds from medicinal plants is on a rise.

Several species of the genus Mallotus are a rich source of biologically active compounds such as phloroglucinols, tannins, terpenoids, coumarins, benzopyrans and chalcones 3-9. Mallotus tetracoccus (Roxb.) Kurz, are found in evergreen forests up to 1600m. The common names include Mullu polavu, Vatta (tamil), Thavatta, Vatta, Vatta kumbil, Vetta kumbil (malayalam) and Uppale mara (kannada). The trees grow up to 5-15 m tall, leaf blades are triangular-ovate or ovate, sometimes 1- or 2-lobate, 10-25 × 9-20 cm, leathery, abaxially brownish tomentose, adaxially glabrous, base obtuse or truncate. The reported bioactivities of the extracts or the individual chemical constituents isolated from this genus include antipyretic 10, anti-inflammatory, hepatoprotective 11, antioxidant and radical scavenging activities 12. Though there are many works reported on various species of Mallotus, a literature search revealed no references to previous work on Mallotus tetracoccus plant extract composition.

Thus the objective of the study was to identify the active compounds from Mallotus tetracoccus leaf extract by GC-MS analysis.

Collection of plant material: The leaves of Mallotus tetracoccus were collected from the Agasthiar Malai Reserved Forest, Western Ghats, South India, authenticated by the Director, Centre for Biodiversity and Forest Studies, Madurai Kamaraj University, and voucher specimens were deposited in the herbarium of Centre for Biodiversity and Forest Studies of our university (No. AM-03).

Preparation of powder and extract: Leaves (1 kg) were shade dried, powdered and extracted with ethanol for 6-8 hours using soxhlet apparatus. The extract was then filtered through muslin, evaporated under reduced pressure and vacuum dried to get the viscous residue. The ethanolic extracts of the plant was used for GC-MS analysis.

Preparation of extract: 2 μl of the ethanolic extract of Mallotus tetracoccus was employed for GC/MS analysis.

Instruments and chromatographic conditions: GC-MS analysis was carried out on a GC Clarus 500 Perkin Elmer system comprising a AOC-20i auto sampler and gas chromatograph interfaced to a mass spectrometer (GC-MS) instrument employing the following conditions: column Elite-1 fused silica capillary column (30 × 0.25 mm ID ×1EM df, composed of 100% Dimethyl poly siloxane), operating in electron impact mode at 70 eV; helium (99.999%) was used as carrier gas at a constant flow of 1ml/min and an injection volume of 0.5 EI was employed (split ratio of 10:1) injector temperature 250°C; ion-source temperature 280°C. The oven temperature was programmed from 110°C (isothermal for 2 min), with an increase of 10°C/min, to 200°C/min, then 5°C/min to 280°C/min, ending with a 9 min isothermal at 280°C. Mass spectra were taken at 70 eV; a scan interval of 0.5 s and fragments from 40 to 550 Da.

GC-MS chromatogram of the ethanolic extract of Mallotus tetracoccus is given in Figure 1.

FIG. 1: GC-MS CHROMATOGRAM OF ETHANOLIC EXTRACT OF THE WHOLE PLANT OF MALLOTUS TETRACOCCUS

On comparison of the mass spectra of the constituents with the NIST library, fifteen peaks were obtained out of which thirteen phytoconstituents were characterized and identified (Table 1). The retention time (RT) is in minutes.

The various phytochemicals which contribute to the medicinal activity of the plant are listed in Table 2.

TABLE 1: PHYTOCOMPONENTS IDENTIFIED IN THE ETHANOLIC EXTRACTS OF THE WHOLE PLANT OF MALLOTUS TETRACOCCUS BY GC-MS

TABLE 2: ACTIVITY OF PHYTO-COMPONENTS IDENTIFIED IN THE ETHANOLIC EXTRACTS OF THE WHOLE PLANT OF MALLOTUS TETRACOCCUS BY GC-MS ANALYSIS

The major phytochemical constituent’s present in ethanolic extract of Mallotus tetracoccus are presented as mass spectra and compound structures are in (Figure 2 to Figure 5). They were identified as Bis (2-ethyl hexyl) phthalate (46.78%), E-8-methyl-9-tetradecen-1-ol acetate (6.63 %), Octadecanoic acid, 2-oxo (4.46%) and longiborneol (2.39%) respectively. 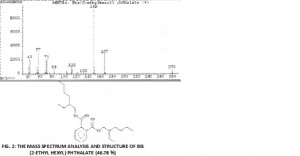 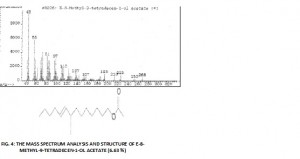 FIG. 5: THE MASS SPECTRUM ANALYSIS AND STRUCTURE OF LONGIBORNEOL (2.39%)

DISCUSSION: Fatty acid esters, derived from vegetable oils, are important plasticizers. Plasticizers are important plastics additives and when added to thermoplastics they increase their flexibility, transparency, and durability. The most common types of synthetic plasticizers are the dialkyl or alkyl aryl esters of phthalic acid (phthalates) and the most widely-used phthalates are the dioctyl phthalate, the diisodecyl phthalate, and the diisononyl phthalate. The level of phthalates in the environment is low as they are subjected to relatively rapid photochemical and biological degradation.

However, the natural occurrence of phthalates in a wide variety of plants is already in the literature 13-15 and in fact fatty foods such as milk, butter, and meats are found to be the main sources of natural bis(2-ethylhexyl) phthalate and other phthalates 16. 1, 2-Benzenedicarboxylic acid bis(2-ethylhexyl) phthalate has been isolated from a marine alga, Sargassum weightii, and apart from its plasticizing ability it was also found to have antibacterial effect on a number of bacteria 17.  There is a first report on isolation of 1, 2-benzenedicarboxylic acid bis(2-ethylhexyl) ester (a dioctyl phthalate ester) from the seeds of Ricinus communis 18. Di-isooctyl phthalate has been reported from Limonium bicolour Kuntze 19 and Dracaena cochinensis (Lour.)SC 20. Butyl and isobutyl phthalates were also reported from D. cochinensis. Di-(2-ethyl hexyl phtahalate has been isolated from the leaves of Cassia auriculata Linn 21.

Triterpenes are reported recently for their antitumor, anticancer, antiviral, antimicrobial and anti-inflammatory activity. The GC-MS analysis of leaf extract of Finlaysonia obovata, a mangrove plant has showed the presence of triterpenoids, octadecanoic acid and several other constituent to be responsible for antibacterial activity 31.

Longiborneol was the main compound of the sesquiterpene group, with only 1.3% of the total of all the compounds. The GC-MS analysis of essential oil of Liverwort Scapania undulata,showed the presence of sesqiterpene hydrocarbons such as isolongibornene also helminthogermacrene 32. Longiborneol present in many plants has shown various properties such as antimicrobial 33, antitumor and antifungal 34. Dodecanoic acid is also found in human milk (5.8% of total fat), cow's milk (2.2%), and goat's milk (3.5%).

CONCLUSION: The present study has been found useful in the identification of several constituents present in the ethanolic extract of the leaves of Mallotus tetracoccus. The presence of various bioactive compounds (identified as phthalate esters, phthalate, alkanes, esters, alcohols, sugar, sesquiterpenoids) justifies the use of the whole plant for various ailments by traditional practitioners.

Vegetable oil-derived plasticizers such as phthalates are benign and not only make plastic material flexible but they also offer benefits such as its resistance to migration, evaporation and leaching, and the stability to light and heat, thus offer environmental friendly plastic for future use. It could be concluded that Mallotus tetracoccus plant is of phytopharmaceutical importance. However isolation of individual phytochemical constituents and subjecting it to biological testing will definitely give fruitful results.

ACKNOWLEDGEMENTS: The authors thank the University Grants Commission of India for the grant of UPE (University with Potential for Excellence) project.