ABSTRACT: Jimson weed (Datura stramonium) members of the Solanaceae plant family; serve as major folklore medicinal herbs. The biologically active compounds spectrum in leaves of Datura stramonium L. was investigated by GC-MS with NMR & FTIR analysis. Steroids, terpenoids, anticholinergic alkaloids, atropine, and scopolamine, are detected. Twenty of them are new constitutions for the species, and eight phytosterol compounds are described for the first time. This is the first report on some other antibacterial heterocyclic compounds, antioxidant flavonoids, antimicrobial phytol, amino acids, and sulfone & fluoro compounds in Datura stramonium leave identified by GC-MS analysis.

INTRODUCTION: Datura stramonium L. is a plant species distributed throughout the temperate region of the world 1. This herbaceous annual is an erect plant, is used traditionally in medicine. The leaves of D. stramonium are indicating the treatment of cell damage and antioxidant activity 2. A variety of phytochemicals have been found to occur in D. stramonium. These phytoconstituents comprise alkaloids, flavonoids, phenol, tannins, saponins, sterol carbohydrate, and protein 3. It has been scientifically proven to contain alkaloids, tannins, carbohydrates, and protein 3. Phytosterol are a large group of compounds that are found exclusively in plants. They are structurally related to cholesterol but differ from cholesterol in the structure of the side chain.

Steroids have been used as blood cholesterol-lowering agents 4, prostatic hyperplasia, rheu-matoid arthritis 5, cell damage, allergies, stress related illness, and inhibit the development of colon cancer 6. Flavonoids are a group of plant metabolites thought to provide health benefits through cell signalling pathways and antioxidant effects 7. D. stramonium is a rich source of tropane alkaloids 8. The applications of alkaloids are not limited to biological control of herbivores but also have pharmacological, veterinary, and medical importance.

Terpenes are hydrocarbon compounds found in D. stramonium, most commonly associated with essential oils and represent many pharmaceutical uses. These chemicals form terpenoids, the basis of some antiseptic, expectorants, gastrointestinal drugs, and pain relievers. Terpenes also show promise as an antioxidant 9. Heterocyclic, amino acids, phytol, and sulphur compounds are present in many natural habitat, including antitumor, antibiotic, anti-inflammatory, antidepressant, anti-malarial, antimicrobial, antidiabetic, herbicidal, fungicidal, and insecticidal agents 10. The present investigation aimed to identify the biologically active compounds in a leaf of Jimson weed using GC-MS with NMR and FTIR technique.

Plant Materials: Mature leaves of Datura stramonium were collected from the near ponds, River Bridge, Ladapuram village, Perambalur district, Tamil Nadu, India. The leaves of were washed thoroughly three times with water and once with distilled water. The leaves of the plant were air-dried in the shade for several days and powdered.

Extraction of Powdered Plant Material: The powders obtained were extracted separately with ethanol and water at room temperature (25 ± 2 °C). The resulting crude extracts were filtered and evaporated in a shaker water bath maintained at 55-65 °C. The obtained semi-dried crude extracts were contained in plastic containers and labelled

GC-MS Conditions: GCMS-QP 2010 plus was used for identification and quantification of biologically active compounds using MS libraries previously compiled from purchased standards for the acquisition of an electron ionization mass spectrum, an ion source temperature of 250 °C was used. The GC was equipped with a SE-30 capillary column a split injection piece (270 °C), and direct GC-MS coupling (280 °C). Helium (1.2 ml min-1) was used as the carrier gas with a split ration 0f 1:10. The oven temperature program for analyzing the extracts utilized an initial oven temperature of 100 °C, maintained for 2 min, finally ramped to 300 °C at a rate of 7 °C min-1 for 10 min. Injection temperature and volume were 250 °C and 1µl, respectively. The total GC running time was about 43.28 min.

NMR Spectrum Analysis: The 1H NMR and 13C NMR spectra were recorded on the PROBHD PABBO BB-PULPROG spectrometer. 2D 1H decoupled 15N NMR spectra were recorded at 297.4K, operating at 30 MHz using a 5 mm broadband probe head. Spectra were accumulated using a 90° pulse angle, a recycle time of 10 s, and an acquisition time of 1.14 s, for a spectral width of 15 kHz for 32K data points. Before the Fourier transform, a zero filling to 64K was applied, and a line broadening of 0.30 Hz was used to improve the spectral signal-to-noise ratio.

FTIR Spectrum Analysis: Dried powder of methanol extract of plant materials was considered for instrumental analysis. The powdered sample of the plant specimen was treated for FTIR spectroscopy. Scan range from 400 to 4000 cm-1 with a resolution of 5 cm-1.

RESULTS AND DISCUSSION: GC/MS is a useful and reliable method for rapid separation and identification of complex mixtures Fig. 1 of Steroids. In the present study, a GC-MS procedure was applied for the identification of Steroids in the plant leaves of D. stramonium L. (Moroccan origin). More than 8 compounds in the Steroids fractions showed the characteristic mass spectral fragmentation of the Steroids and their metabolites.

D. stramonium L. is a plant with both poisonous and medicinal properties. The neurotoxicity is attributed to the presence of tropane alkaloids which contain a methylated nitrogen atom (N-CH3) and include the anticholinergic drugs atropine and scopolamine as well as the narcotic cocaine 20. It contains a variety of toxic tropane alkaloids such as atropine, Hyoscyamine, and scopolamine 21.

The two Terpenoids were detected in the intact plant of this species for the first time, like R-Limonene Fig. 12 and Isopinocarveol with the molecular weight 184 & 152 and RT of the base 11 & 10 minutes, respectively. Amino acids were detected like Phenylserine, 2-fluoro-4, 5-dimethoxy-.bet. beta-didehydro and Sulfones compounds was detected like Sulfone, (3-amino-3-oxopropyl) (4-chlorophenyl)-with the MW 271 & 247 and RT of the base 13 min. Fluoro compounds like Ben-zamide, 3 - chloro - 4 - ethoxy - N - (6-fluorobenzothiazol-2-yl)- with MW 350 at 13 minutes. Sulphur compounds like 5, 9, 13-tri-methyltetradecanoic acid 2, 2, 2- trifluoroethyl ester with MW 352 at 22 min. The detected the 2 Phytol compounds with MW 296 at 15 & 17 min. Finally, many heterocyclic compounds was detected like Lupan-3-one, cyclic 1, 2-ethanediyl acetal-, Cyclohexanone, 2-(1-methyl-2-nitroethyl)-, 2-Oxazolamine, 4, 5-dihydro-5-(phenoxymethyl)-N-[(phenyl mino) ca- and 4, 5, 6, 7-Tetrahydro-3H-cyclopenta [b] pyran-2-one. Heterocycles are present in a wide variety of drugs, most vitamins, many natural products, biomolecules, and bio-logically active compounds, including anti-tumor, antibiotic, anti-inflammatory, anti-depressant, anti-malarial, anti-HIV, antimicrobial, antibacterial, antifungal, antiviral, antidiabetic, herbicidal, fungi-cidal and insecticidal agents.

The phytochemical analysis of the plant revealed that D. stramonium contained saponins, tannins and alkaloids, and glycosides. The secondary meta-bolites identified in the plant materials showed antimicrobial activity 22. The compound is mostly Secondary metabolites such as alkaloids, steroids, tannins, and phenol compounds which are synthesized and deposited in the leaf of the D. Stramonium 23.

The rest of the biologically active compounds had been identified according to their fragmentation pattern reported in the literature, as indicated in Table 1. 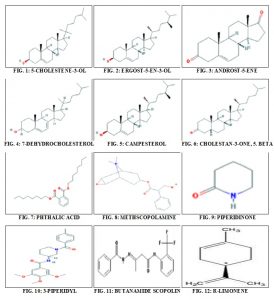 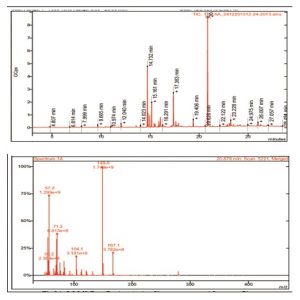 CONCLUSION: The leaf extracts of Datura stramonium showed the presence of eight Phytosterol like Campesterol, Sitosterol, etc., two Terpenes like R-Limonene, Isopinocarveol, Amino-acids like Phenylserine and some breakdown compounds of Alkaloids, Flavonoids were newly isolated compared with other biologically active compounds.

The ability of these compounds to inhibit the growth of microbes and also treatment of various human inflammations caused due to these pathogenic strains.

ACKNOWLEDGEMENT: The authors are grateful to Dr. Saravanan, Dept. of Chemistry, National College, Trichy, for providing us all Laboratory facilities. The authors would like to thank Dr. Radha, Government of Chemistry, SR College, Trichy, Mr. Mohanraj, and Mr. Vegatesh, Government of Chemistry, SCAS, Perambalur, for providing the necessary idea to carry out this research. My heartful thanks to My Parents for their financial support and continuous encouragement during the work.

CONFLICTS OF INTEREST: The author declares no conflicts of interest.