ANALYSIS OF MOLECULAR INTERACTION IN TRAMADOL DRUG WITH ALCOHOLS UNDER ULTRASONIC TECHNIQUE AT TEMPERATURE T= 278.15 K

ANALYSIS OF MOLECULAR INTERACTION IN TRAMADOL DRUG WITH ALCOHOLS UNDER ULTRASONIC TECHNIQUE AT TEMPERATURE T= 278.15 K

ABSTRACT:  The prime aim of this research paper is to find out the various kinds of intermolecular interactions in the alcoholic tramadol below the room temperature. Study of molecular interaction in the mixture of alcohols namely ethanol,1-propanol,1-butanol with tramadol drug at T = 278.15 K have been examined under the ultrasonic technique at 2MHz. Ultrasonic data of drug solutions has been evaluated at various desired acoustical parameters e.g. Free length, adiabatic compressibility, relative association, molar sound velocity, adiabatic compressibility, internal pressure etc. In this research, investigation is carrying out the various types of possible molecular interaction in the solution. These parameters have been thoroughly analyzed and eventually interpreted at the possible molecular interactions such as structure making and structure breaking effect and also solute-solvent, ionic interaction, H-bonding effect in the alcoholic tramadol drug solution. It can be concluded that there is associative behavior in the alcoholic tramadol solution at desired concentration.

INTRODUCTION: The effect of the drugs in pharmacodynamics and pharmacokinetics is physiological and bio-chemical and their action of mechanism on organ system level or subcellular level or macromolecular level. It also refers to movement of drug in and altercation by the body includes absorption and distribution by binding or localization or storage or biotransformation or excretion of the drug. 1, 3 Ultimately it provides physicochemical properties of the drugs and functional group of molecule in the living organism.

Most of the drugs are organic molecules with both hydrophilic and hydrophobic group and these drugs intend towards the specific as well as electrostatic interactions. The information of physicochemical properties of the drugs deals with the physiological action which direct depends on the behavior of solution.4, 5 Ultrasonic wave are propagated in the liquid and it is directed to evaluate the properties of liquid which is highly focus on the physical and chemical properties or behavior of the solution and their molecular interactions examine by ultrasonic parameters. Such a particular data is very helpful to carrying out the various acoustical parameters which are more supportive to interpret the molecular interactions at micro level in the drug solutions.6, 10

In the present trend, ultrasonic studies are exclusively carried out and examined the thermodynamics properties and also predict various types of interaction occurred in the solution.11,12  Alcohols are highly self-associated through H-bonding and aprotic than other.13, 15 Tramadol is extensively metabolized after oral administration. The inhibition of one or both types of the enzymes involved in the biotransformation of tramadol may affect the plasma concentration of tramadol or its active metabolite.16 Tramadol and its metabolites are excreted mainly by the kidneys, with a cumulative renal excretion (tramadol and metabolites) of approximately 95%. You should avoid or limit the use of alcohol while being treated with tramadol. Using tramadol together with ethanol can increase nervous system side effects such as dizziness, drowsiness, and difficulty concentrating.

In the present paper ultrasonic velocity, density, viscosity, relative association and other related parameters of the mixture of tramadol and ethanol, propanol, butanol are reported at low temperature range i.e. 278.15K over a range of 0.01- 0.1 molar concentration.  In order to investigate various kinds of interactions and their subsequent effect on transport properties. The interpretation of physicochemical behavior of drug can be the great interest from academic as well as physiological sense.17, 22

The solvents alcohols like ethanol, 1-propanol, 1-butanol and analgesic drug tramadol were used AR grade (E-Merck chemicals, Germany) without further purification. The purity of chemicals has been checked out by comparing the ultrasonic velocity, densities data with standard literature value.23,25 All the measurement of ultrasonic velocity of the solution by using ultrasonic interferometer supplied by Vi-Micro system, Chennai (Model VCT: 71) having frequency 2 MHz with on overall accuracy of 0.0001 m/s. The densities of solutions are measured using 10 ml specific gravity bottle. Specific gravity bottle having accuracy of ± 2 X10-2 kg/m3.

Automatic temperature controller water bath supplied by Lab-Hosp Company Mumbai having accuracy ±1K temperature. Viscosities were measured at desired temperature using Oswald’s viscometer; the viscometer has been calibrated using doubled distilled water with literature value.  The time flow of doubled distilled water and experimental solutions are measured with digital stop clock having accuracy of 0.01 sec (Model: RACER- 10W).Weights were measured with an electronic digital balance (Contech CA-34) having accuracy 0.0001gm. By the above experimental set up utilized to determine the ultrasonic and thermo-acoustic parameters in mixtures of alcohols and tramadol at T=278.15K at various molar concentrations.

The formulation of ultrasonic and thermo-acoustic parameters as follows: 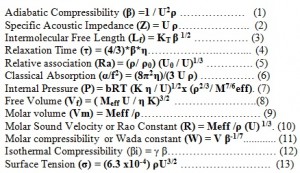 RESULTS AND DISCUSSION: The Experimental evaluation in terms of Ultrasonic Velocity (U), Density (ρ), Viscosity (ƞ) and allied parameters with increase in concentration of Tramadol with ethanol, propanol, butanol at  temperature T=278.15K are presented in Table 1 to 3 and it has been shown graphically. Ultrasonic velocity increases nonlinearly with increase in mole fraction of Tramadol (Fig.1). Dipole-dipole interaction or hydrogen bonded complex formation between unlike molecules which leads to increase in sound velocity and decreases compressibility (Fig.4). At low concentration, the number of hydrogen bonds formed may be less and at higher concentration it may be more due to solute-solute interactions.

The behavior of increase in velocity and decrease in compressibility forms a tightly bounded system.26 Adiabatic compressibility is a measure of intermolecular association or dissociation or repulsion. Free length of solution decreases as the concentration increases; this indicates significant interactions between solute and solvent molecules 27, 30 (Fig.6). Ultrasonic velocity increases on decrease in free length and vice-versa. A sudden decrease in molecular free length shows a tightly packing molecules or strong interaction. Increase

Internal pressure provides an excellent basis for examining the solution phenomenon and studying various properties of the liquid state (Fig.10). Observing the changes in the internal energy of liquid or liquid mixtures, it has seen that it undergoes a very small isothermal change. It is a measure of cohesive or binding forces between the solute and solvent molecules. The internal pressure may provide information regarding the nature and strength of forces existing between the molecules. Free volume decreases with increase in molar concentration implies molecular binding between solute and solvent molecules that implies structure making in nature (Fig.11). Molar sound velocity and molar compressibility increases with increasing concentration that shows there is strong interaction between solute and solvent molecules and vice-versa (Fig.13, 14). The variation of surface tension also supports the significant associative interaction in the solution (Fig.16). 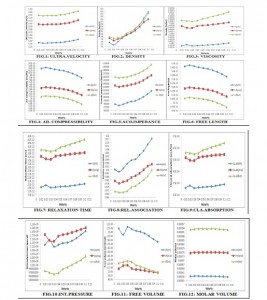 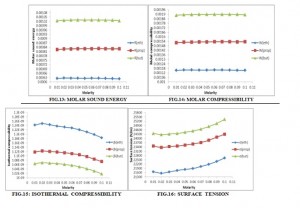 CONCLUSION: The estimation of alcoholic tramadol solution, mentioned in research paper, accomplish towards the strong intermolecular interaction that revealed the structure making property in the solution. The solute-solvent interaction interpreted in terms of structural re-arrangement due to hydrogen bond interaction between solute and solvent system.

ACKNOWLEDGMENT: I express my sincere thanks to my guide Dr. O. P. Chimankar and the HOD of Physics, S.P College, Chandrapur to support me for the compilation of this research.