ABSTRACT: Proteomic study of Macrotyloma uniflorum is quite useful for exploration of its Calcium binding proteins (CBPs) and their antilithiasis character. CBPs play an important role in prevention of kidney stone formation. Considering this fact the study was design to identify CBPs in M. uniflorum. Total six samples were collected from different elevations of Uttarakhand. Total buffer soluble proteins of seeds were extracted according to the standard protocols. After quantification of protein with Bradford method 20 µg protein was loaded in 12% sodium dodecyl sulphate polyacrylamide gel electrophoresis (SDS-PAGE) gel according to Laemmli discontinuous system. CBPs were identified with the help of stains-all gel staining methods. In the proteomic study a protein (~44KDa) showed its distinct appearance when screened, the seeds from high elevation to low elevation. Three blue bands (CBPs) appear in all samples after stains-all staining. One high molecular weight protein (~43KDa) and two low molecular weight proteins (~25.1 and ~17KDa) respectively were observed. SDS-PAGE technique of seed proteins can be economically used to broad genetic variation and relatedness in cultivars and also to make distinction mutants from their parent genotype, seed protein based marker can be used for identification of genotype in future. This is a novel attempt for identification of CBPs on horse gram. CBPs have many therapeutic uses and may be used for development of antilithiatic drug formulations.

INTRODUCTION: Stray legumes are better adapted than the most important legume crops to extreme soil and clinical conditions, with high tolerance to abiotic environmental stresses such as drought. As a stress response they can also create compounds with pharmaceutical significance.

Large-scale genomics techniques are being applied to many of these beforehand understudied crops, with the first successes reported in the genomics area. However, greater investment of resources and manpower are necessary if the latent of orphan legumes is to be unlocked and applied in the prospect 1.

M. uniflorum (Lam.) frequently known as horse gram (HG) is a kind of legume of tropics and subtropics. It is drought tolerant and makes good growth in area with low rain fall too 2. In India, Macrotyloma uniflorum is also known as gahat, muthira, kulath or kulthi, hurali. The seeds contain carbohydrates, proteins, alkaloids, tannins, steroids and β-sitosterol and are rich source of urease and polyphenols and even an excellent source of iron and molybdenum. The grain with husk contains albuminoids, starch, oil, fiber, ash, phosphoric acid and enzyme urease 3, 4. Proteomics is the branch of science dealing with the isolation, identification and characterization of proteins 5. The protein profiling of cultivars and use of genetic markers have been widely and effectively used to conclude the taxonomic and evolutionary aspects of several crops 6.

The seeds have been reported to possess antiurolithiatic activity on ethylene glycol induced urolithiasis in albino rats 7 and also having antihelmentic 3, antidiabetic activity 8. Sodium dodecyl sulphate polyacrylamide gel electro-phoresis (SDS-PAGE) is most economical simple and extensively used biochemical technique for analysis of genetic structure of cultivars. The horse gram is a high dietary legume and turn into a staple food for people living in dry and rural regions in Uttarakhand. It is one of the most nutritious, high in proteins and easily digestible. Even though, these seeds were used for centuries, less information is available regarding the biochemical and proteomic distinctiveness. On the basis of existing gaps in the domain of knowledge the study was designed to assist the researchers and farmers. The study was designed to bridge the information gaps in the proteomic diversity to portray the usefulness of M. uniflorum as a nutraceutical.

Sample Collection: Cultivars of M. uniflorum were collected from local farmers from different elevations of Kumaun and Garhwal regions of location of Uttarkhand Table 1 and Fig. 1 during the harvesting seasons as per the protocol of Mehra A et al., 2013 9. 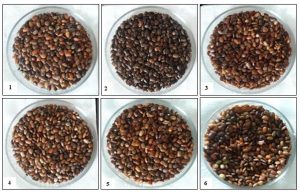 Isolation of Total Seed Proteins: 1g seeds of selected cultivars crushed in a pestle-mortar to a fine powder. The defatted powder was transferred in Oakridge tubes. 0.1M PMSF (100 µl) and  2 ml of chilled extraction buffer (5mM-EDTA, 50 mM - NaCl, 25 mM-Sodium phosphate, pH 7.2) were added. It was vortexed by hand tabbing followed by centrifuging all samples at 10,000g for 15min at 4 °C. The supernatant was collected in fresh tubes and stored at -20 °C. The Total Protein was run in 12% SDS-PAGE gel to find good resolution, the banding pattern observed with the gel documentation system (Alpha Innotech).

Protein Quantification and SDS PAGE: Total protein was quantified according to Bradford assay 25 and 20 µg/well protein in 12 % SDS-PAGE gel run according to Laemmli, 1970 10.

Stains-all Based Identification of CBPs: Stains-all is a metachromatic cationic carbocyanine the dye and used for the identification of CBPs in various organisms 11. The protocol for Stains-all was adapted from Goldberg and Warner (1997) 12. After electrophoresis, the gels were rinsed three times with 25% (v/v) isopropanol followed by washing in 30 - 50 ml of the same solution on a shaker for 10 min.

The cycle of rinsing (three times) and washing was repeated three times (30 min. incubation time). minor modification was made in time of 25% isopropanol washing in 30 - 50 ml on a shaker for 30 min instead of 10 min (90 min. incubation time). This procedure ensures the removal of all SDS, which, if present, would cause the precipitation of the Stains-all dye. Isopropanol was then replaced by 30 ml of Stains-all solution (30 mM Tris, 7.5% (v/v) formamide, 25% (v/v) isopropanol, adjusted to pH 8.8 with HCl, followed by addition of 0.025% (w/v) Stains- all). Due to the photosensitivity of Stains-all, gels were incubated in light-tight containers on an orbital shaker at room temperature for 2h.

SDS-PAGE Total Protein for Proteomic Diversity: The SDS-PAGE profile can very lucidly measure the genetic diversity in M. uniflorum cultivars. It has been shown in Fig. 2, there is high variation in protein pattern in the gel. It was observed in the SDS-PAGE gel that one band (~44KDa) is present (low elevation: 1556 m) in lane six and one of the gel But absent in other lanes (high elevation: more than 2000 m). The result reveal that when we move from lower to high elevation this protein starts degenerating and This could be inferred as a heat tolerant protein but needs more explorations. The present investigation would lead to protein sequencing to decipher the various proteins.

The total buffer soluble protein (TBSP) of M. uniflorum cultivars is negatively correlated to the total seed weight as projected in Table 2. 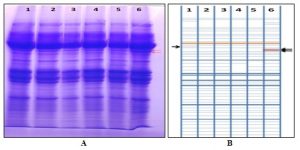 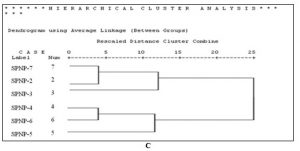 The total seed protein banding patterns were observed to be identical for all the cultivars tested. However, in two cultivars, an additional band of 44 KDa was also detected as shown in Fig. 2a which shows differentiation between some high altitude cultivars. A dendrogram constructed based on the UPGMA clustering method revealed two major clusters. Cluster-I comprises of 3 cultivars, while cluster-II includes the remaining three cultivars. The cultivar SPNP-7, SPNP-2 and SPNP-3 were quite unique from the remaining cultivars as evident from the dendrogram Fig. 2c. 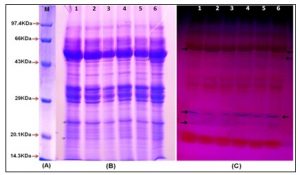 After stains-all staining the blue bands are calcium binding protein and pink bands other proteins. The gel represents three to four bands indicating that they are calcium binding proteins. One is a high molecular weight protein (~43KDa) and remaining three ranged between (~25.1 to ~17 KDa). Fig. 3 All depicted proteins need more exploration subjecting them to 2D gel analysis and MALDI-TOP sequencing of specific spots.

According to the Fig. 4 most kidney stones are calcium stones, combined with oxalate, phosphate, or occasionally uric acid. Oxalate is a naturally occurring substance found in food. CBPs may bind on calcium and free the calcium from binding with oxalate. Simultaneously CBPs facilitate free calcium for other body metabolic uses for the body like obesity, diarrhea, asthma etc. 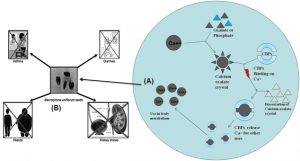 FIG. 4: DIAGRAMMATIC REPRESENTATION OF THE CBPs ACTING ON CRYSTAL FORMATION IN KIDNEY IN THE FORM OF KIDNEY STONES. (A): Diagrammatic representation of the hypothesis of the present research investigators, (B): Court assay 15

DISCUSSION: Calcium-binding proteins are proteins those participate in calcium cell signaling pathways by binding to Ca2+, the calcium ion that plays an important role in many cellular processes. Calcium ion has unique specific domains that bind to CBPs and is known to be heterogenous. One of the functions of Calcium binding proteins is to regulate the amount of free (unbound) Ca2+ in the cytosol of the cell 16.

All urinary stones are in part composed of proteinaceous organic matrix; however, there has been much debate as to the importance of this material in urinary stone formation. It has been suggested that matrix has an active role in stone formation and may act as a binding or cementing material that is necessary for crystal aggregation and growth 23. Phytopharmaceuticals have shown a great promise in the recent past with some plant made pharmaceuticals in clinical trials and many others are under investigation. Secondary metabolites which are stress biochemicals produced by the plant systems to protect the plants from the biotic or abiotic stresses have been a great source of pharmaceuticals and typically provide a lower cost of production relative to the cell culture system currently used to produce biological therapeutics 24.

CONCLUSION: SDS-PAGE of seed proteins can be cost-effectively used to broad genetic variation and relatedness in cultivars. Moreover seed protein based marker can be used for identification of cultivars in future. Calcium binding proteins (CBPs) may bind on free or complex calcium. This is a novel attempt for the detection of CBPs in horse gram. Identified CBPs of present study may lead this research to the sequencing of protein and the correlation of the antilithiatic potential of these proteins. CBPs may be used as a curative agent in the kidney stones and may lead to development of antilithiatic formulation. This study may prove to be a point of in the field of proteomic investigation of M. uniflorum.

ACKNOWLEDGEMENT: The authors wish to acknowledge the Science Engineering and Research Board, Department of Science and Technology, New Delhi, Government of India. The authors are thankful to farmers of Uttarakhand for providing the seed samples of the Cultivars analyzed in present study.

CONFLICT OF INTEREST: Authors of this manuscript have no conflict of interest