In 2004, the new pricing regulation was enforced in Bulgaria. It liberates the OTC medicines pricing procedure from reference pricing to registration according to marketing authorization holder proposal. The goal is to analyse the changes in the pricing regulations concerning OTC and its impact on prices and utilization of analgesic medicines. Two main hypotheses are tested in the study. H1: The changes in the price regulation liberate the market in terms of increase in the analgesics utilization; H2: The changes in the regulation lead to the decrease in prices. Regulatory and market analysis were performed focusing on procedures for price settlement and their changes for 4 international non-proprietary names (INNs) of analgesics on the local market – methamizole sodium, paracetamol, ibuprofen, acetylsalicylic acid for the period before and after the changes in the regulation. The descriptive statistic, z-test for proportions, and one way ANOVA analysis were performed to evaluate the statistical significance of the changes in utilization and prices. An increase in the analgesics utilization has been observed in 2006 compared to 2003. Increase in utilization was found to be statistically significant for all INN and thus confirms our first hypothesis. After the changes in the regulatory control we observe the increase in the mean official and market prices of methamizol and paracetamol in 2006 and decrease in 2009. The prices of ibuprofen decrease in 2006, but in 2009 the officially registered price increased while the market one remains lowest. For acetylsalicylic acid the mean prices decreased slowly in 2003 and then increased in 2009. All changes in the prices were not statistically significant even when we compare the prices in 2009 with the ones in 2003. Thus our second hypothesis is not confirmed. The liberalization of the price control led to increase in utilization but also to increase in prices.

INTRODUCTION: Over-the-counter (OTC) medicines are dispensed without prescription directly to consumers. They are intended to treat self-limiting conditions easily recognized and manageable by the general public. The non-prescription status of OTC medicines is determined by medicines regulatory agencies. OTC medicines usually contain active ingredients, which are well known, long term established on the market, and safe in recommended dosages 1. The therapeutic group of non-prescription analgesics comprises of 4 active ingredients and some of them have been known for more than 150 years.

In most of the countries, the prices of OTC medicines are not regulated by the governmental authorities because they are not reimbursed by the health insurance systems and the cost of treatment of minor ailments is lower than that for chronic and debilitating conditions 6, 7. In contrast there are many other countries where the OTC prices are or were under regulatory control for ensuring peoples affordability 8. In Europe the opinion that the price control of OTC medicines is not necessary because it is an obstacle in front the competition prevails 9. Some countries like Bulgaria liberate the OTC price control but evidences for the effect of this measure are still controversial.

The goal of this study is to analyse the major changes in the pricing regulations concerning OTC medicines and its impact on prices and utilization of leading analgesic medicines.

Two main hypotheses are tested in the study.

H1: The changes in the price regulation liberate the market in terms of increase in the OTC analgesics utilization;

H2: The changes in the regulation lead to a decrease in prices.

Information on all authorized for sale trade names, dosage forms, and their prices was collected, as well as on their utilization in number of tablets and value on the local market in 2003, before the new regulation come in force, and in years 2006 and 2009. The market share of every INN was calculated as part of the utilization of all INN under consideration. For every dosage form found on the market two price variables were collected – the officially registered ceiling retail price and the one on the market. The prices were recalculated per dosage form (tablet) and per defined daily dose (DDD) that is the average recommended dose, established by the World health organization (WHO) 12.

The descriptive statistic, z-test for proportions, and one way ANOVA analysis were performed to evaluate the statistical significance of the changes in utilization and prices.

Regulatory Analysis: In 2000, the Ministry council accepted an Ordinance for medicines price regulation 10. According to the ordinance all medicines prices, including OTC medicinal products, were regulated by the pricing committee established at the Ministry of health. The price control focused on producers’ prices and mark ups within the distribution channel.

Producers’ price was regulated through the external reference price comparison with European countries and the lowest price was approved as a reference price per product. Using the regressive marginal scale, the maximum possible mark ups were endorsed and depending on the producer price, the ceiling retail prices including VAT of 20% were calculated and officially published (Table 1).

Near the end of 2004 the new ordinance was endorsed 11. The changes affect mainly the OTC medicines prices. With the new ordinance the medicines were divided by prescription status and the previous system for price regulation remained only for prescription only medicines. The price registration regiment of the OTC medicines was established. Producers have to declare only the ceiling retail price in local currency. This ceiling retail public price was announced by the Ministry of Health in a dedicated public register, and on every 3 months in the private section of the State Gazette. In light of the new ordinance, the pharmacy (retailer) is obliged to sell the OTC product at a price not higher than the approved maximal retail price. Thus the OTC medicines could be found within the pharmacies with different prices – the officially registered, and “market” price (Table 1).

After the endorsement of the new ordinance in 2004 producers started to register their ceiling retail prices and this process took near 1 year. Thus, the market changes started to be observed in 2006.

Due to the longer period of introduction enforced by the new regulation, in the current study we observe 2003 as a year before the changes, 2006 as the first year, when the registered prices appear on the market for all products and 2009 as the year when we can reveal some long term consequences. The regulatory changes shorten the process of access to the market and decrease the necessary evidences for price regulation of the OTC medicines.

Methamizol is the market leader with 43.4% (2006 year) to 45.7% (2009 year) relative share of utilization in tables among the 4 INNs observed, followed by acetylsalicylic acid with 31.3% (2009 year) to 36.4% (2003 and 2006), then paracetamol and ibuprofen (Table 3). Similar are the proportions in value terms. No statistically significant changes in the market share of the INNs have been observed, which means that the leader during the whole period ramains methamizol.

OTC Analgesics Prices: In terms of new product entrance, the market of analgesics is stable. Only for ibuprofen 5 new dosage forms were introduced, which led to 10 dosage forms available on the market in 2009. Methamizol, acetylsalicylic acid, and paracetamol were presented with 6 dosage forms each in 2009 (Table 4).

TABLE 3: Z-TEST ANALYSIS OF THE CHANGES IN PROPORTIONS OF UTILIZATION

The officially registered mean prices were higher than the “market” ones for both price variables (tablets and DDD) and performed a steady increase – Figure 1. It is logical because the official prices are ceiling ones but medicines could be sold at lower prices on the market. All manufacturers benefit from this regulatory provision and register higher prices but sold at lower ones. The difference among the official prices per DDD and the market ones was not found to be statistically significant (Table 5).

After the changes in the regulatory control we observe the increase in the mean official and market  prices of methamizol and paracetamol in 2006 and slow decrease in 2009, but prices remain higher in comparison to 2003 (Figure 1, Table 4).  The mean price of ibuprofen decreased in 2006, but in 2009 the officially registered price increased, while the market ones remain lower. For acetylsalicylic acid the mean price decreased slowly in 2003 and then increased in 2009. All changes in the prices were not statistically significant, even when we compare the prices in 2009 with those in 2003. 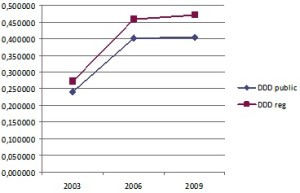 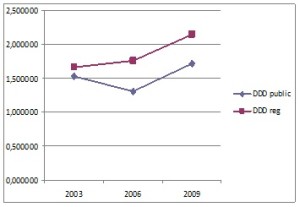 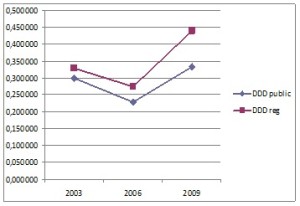 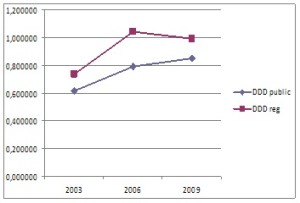 Thus, our second hypothesis is not confirmed.

The result that the prices of the observed products increase after the liberalization of the regulatory procedure is not a surprising one. Similar results have been observed in Norway after the changes in the OTC prices regulation 13.

It is a well-known theoretical postulate that the pharmaceutical market is not a common market and competitive rules don't seem to work even when patients could recognize their symptoms and choose alone the necessary product 14. We can suppose that the competition plays more important role - that is the case of ibuprofen, but other factors like market campaigns may also play an important role. The number of ibuprofen dosage forms increased twice on the market and the mean prices became lower. Similar results have been reported in other studies for cardiovascular medicines 15. Lluch and Kanavos consider that the liberalization of the distribution of OTCs could stimulate competition and hence improve access to medicines 16.

It is evident that the mean prices rose insignificantly for all other product. It could be supposed that the market is sensitive to sharp price changes and manufacturers are careful. Thus the liberalization of the price regulation did not benefit people. On the other side the tremendous increase in the utilization probably influenced from advertising campaigns led to the sharp increase in market values, which benefits manufacturers.

The leading place of methamizol in comparison to other European markets could be explained with well-established habits of usage during the longer period of national production. The leading Bulgarian manufacturers have produced methamizol for more than 50 years.

CONCLUSION: The regulatory changes shorten the process of access to the market and decrease the necessary evidences for price regulation of the OTC medicines.

Manufacturers register higher prices but medicines are available in lower ones on the market. The liberalization of the price control led to the increase in utilization but also to an increase in prices.