Symphonia globulifera L.f. (Anani) is an arboreal species, which occurs in the Amazon with antimalarial and antimicrobial properties, especially in the treatment of skin inflammations. It is also used as a general tonic and laxative for pregnant women and its sap/latex is used against rheumatism and tumors. The utilization of natural products from plant origin implies in pharmacobotanical quality control, which consist of the technical specifications of the species. Anatomical description of the leaves and petioles of Symphonia globulifera L. f. were performed. Epidermal cells on both sides of the leaves were observed; they are heterodimensional and polygonal. The stomata are anomocytic and were found only on the abaxial surface. The petiole is plan-convex coated with quadrangular cells and thick cutinization. The results are relevant to the anatomical characterization of the species since data on leaf anatomy of S. globulifera are scarce.

INTRODUCTION: In recent years, there has been a growing interest in alternative therapies and in the therapeutic use of natural products, especially those derived from plants. Therefore, medicinal plants are important for pharmacological research and drug development, not only when its constituents are used directly as therapeutic agents, but also as raw material for synthesis or models of pharmacologically active compounds 1.

There is a need to combine the empirical knowledge concerning the popular use of medicinal plants with scientific research based on detailed studies of plant species, as well as botanical, phytochemical, pharmacological, and toxicological aspects and develop scientific and technological methodologies 2.

The outcome of this breakthrough brings to the development of different herbal medicinal products since scientific and technological information provided and provides the means for developing herbal medicines, unlike traditional preparations obtained from plants in folk medicine 3, 4. Macro and microscopic parameters allow the botanical quality control of pharmaceutical helping the authenticity of drugs and their adulterants by identifying and separating a particular plant species to another.

Di Stasi, 5 notes the importance of morpho-anatomical analysis for quality control of vegetable raw material in pharmaceutical industry, saying that the analysis provides subsidies that contribute to the standardization of inputs, including allowing the differentiation between species botanically close.

The Clusiaceae family includes 50 genera and 1200 species distributed mainly in tropical regions of the globe. However, some genres are developed with ease in the northern temperate zones. This family includes trees, shrubs, climbers and herbs of economic interest for the production of edible fruits, timber, chemical derivatives of pharmaceutical interest and paints 6. Within this family is the genus Symphonia, which belongs to the species Symphonia globulifera L.

This species is a tree occurring mainly in the lowland Amazon rainforest. When it occurs in the environment of land, its stem is straight without the presence of buttresses. It is a large tree. The species produces a yellow resin contained in stems, leaves and fruits 7. Their flowers are red and bloom during the months from July to September 8.

There are also reports of its popular use in different countries such as Cameroon, and in different regions in Brazil, particularly in the Amazon, especially in the treatment of skin inflammations, and as a general tonic and laxative for pregnant women 9, 10. Its sap/latex is used against rheumatism and tumors 11, 12. Its leaves have antiplasmodial and antioxidant activities 13, and its roots have antimicrobial properties 14.

Due to the scarcity of studies dealing with the characterization pharmacobotany this species, this study sought to contribute to the identification of their macroscopic and microscopic leaf and petiole pharmacognostic purposes, aiming at the quality control of S. globulifera as a pharmaceutical drug.

Plant material: The leaves of  Symphonia globulifera L. f., Clusiaceae, were obtained from the Herb Vendors Associations from the Ver-O-Peso Market (Ver-as-Ervas)  in the Metropolitan Area of Belém, Icoaraci District (latitude 1°17’46”S and longitude 48 °27 '58.02 "W), collected at the end of March 2009. The botanist Professor Dr. Mário Augusto G. Jardim performed species identification and a voucher specimen was deposited at the Goeldi Museum herbarium, under the MG registration number: 156324. Part of the plant material was prepared for the anatomical analysis and another part was dried at 40 °C, crushed, and the powder obtained was used in other assays.

Anatomical studies: To perform the anatomical structural analysis by light microscopy, the specimens was fixed in FAA70 for 48 hours and preserved in 70% ethanol. For sections, hydration was processed with gradual reduction of alcohol concentration at intervals of 30 minutes, at the total of two hours. Sections were stained with basic fuchsin and astra blue 15 for the manufacture of semi-permanent slides. Epidermis was dissociated to separate adaxial and abaxial faces, applying commercial sodium hypochlorite 16. The observation was made in optical microscope and photomicrographed in light microscopy Medlux, model XSZ-150Ai.

For the ultrastructural anatomical analysis through scanning electron microscopy (SEM), leaves and fragmented petioles were submitted to the process of getting a critical point, coated with gold dust and mounted on stubs to obtain SEM pictures. The material was previously subjected to dehydration in an ethanol series (30, 50, 70, 80, 90, 95 and 100%), in a total period of 2 hours and 20 minutes.

Analysis of the structural and ultrastructural anatomy: The anatomical characteristics of S. globulifera (Figure 1) leaves were fundamental in identifying the species, as studies on leaf anatomy of this plant species are scarce, and those related to the roots are the most studied along with flowers (Figure 2), concerning the pollination process.

In frontal view, the epidermal cells of both surfaces are heterodimensional and have polygonal shape, without distinction between costal and intercostal cells. On the adaxial surface, the cell walls are smooth whereas on the abaxial surface the cell walls are slightly sinuous. In transversal view, cells are tabular with smooth walls and there is thin presence of cuticle on both sides, but on the adaxial face, they are slightly striated. The stomata are anomocytic, surrounded by four to six cells, found only on the abaxial surface. 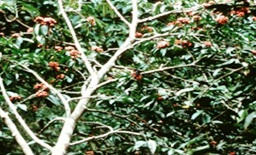 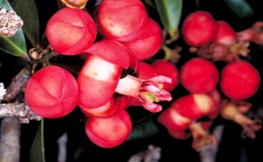 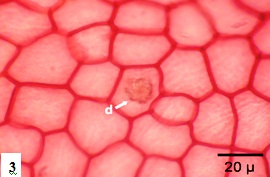 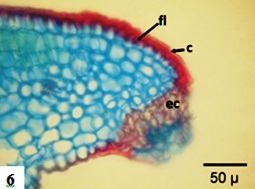 In cross section, the cells of the upper face are bigger than the ones on the opposite side. The mesophyll consists of two to three layers of palisade parenchyma cells in the upper region. On the opposite position, there are several layers of heterodimensional cells with polygonal shape and large intercellular spaces composing the spongy parenchyma. The mesophyll is dorsiventral and there are oxalate calcium druses in the interior of the mesophyll cells (Figure 5).

The margin is bent towards the abaxial face with papillose epidermal cells with flanges and thick cuticle in relation to leaf. The fundamental parenchyma is composed of round parenchyma cells limited by a number of sclerenchyma cells (Figura 6). According to Camelo 19, this result is in agreement to those obtained for the Vismia guianensis (Aubl)Choisy species, which belongs to the same family of the species studied in this work. 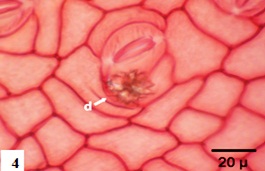 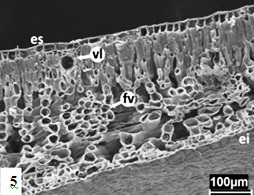 FIGURE 6: DETAIL OF THE LEAF MARGIN, SHOWING THE FLANGE (fl), THE THICK CUTICLE (c) AND THE SCLERENCHYMA (ec)

Externally to the vascular bundles, usually in the poles, there are latex vessels. A layer of parenchyma cells surrounds the vascular bundles, which are limited at the upper and lower region by a set of sclerenchyma cells. The xylem occurs in the upper region and there are some isolated phloem cells groups in the lower region. There are collateral bundles and the latex vessels are associated to primary and secondary vein and the midrib (Figure 7).

According Cronquist 18 marked one of the anatomical characteristics of the family Clusiaceae is the presence of secretory canals and cavities schizogenous in all tissues, where they are produced and secreted several secondary metabolites. Its leaves have resinifera secretory cavities, some of them producing aromatic resins, which, added to the secretory ducts promote the accumulation of various types of secondary metabolites, such as xanthones, which may be either isolated or grouped with crystals of calcium oxalate 20, 21.

The mibrid is printed on the superior face and prominent on the inferior one. In cross-section, the epidermal cells on the adaxial face diminish their size as they approach the middle region. Under the epidermis, there are several layers of heterodimensional round parenchyma cells with calcium oxalate druses and intercellular spaces. There are several latex vessels on the periphery of the vascular tissue, which is surrounded by sclerenchyma tissue. The later one is in arc shape partially closed around itself towards the adaxial side and composed by collateral bundles (Figures 8 and 9). 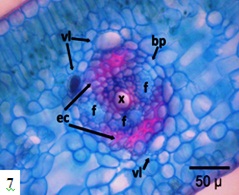 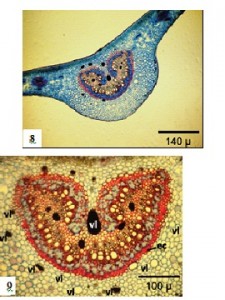 FIGURE 8-9: MIBRID SHOWING THE SCLERENCHYMA TISSUE IN THE FORM OF ARCH PARTIALLY CLOSED AROUND ITSELF (8) AND THE DETAIL OF THE MIBRID VASCULAR TISSUE SURROUNDED BY LÁTEX VESSELS (vl) AND SCLERENCHYMA (ec) (9)

In transversal section, the petiole is plan-convex coated with quadrangular cells and thick cutinization. The cortex consists of parenchyma cells with limited intercellular spaces and the presence of isolated calcium oxalate druses on the convex portion, and in clusters on the flat part.

Latex vessels are found distributed around the central vascular bundle which has a shape similar to the midrib, but is limited by a set of compact parenchyma cells (Figures 10, 11 and 12). 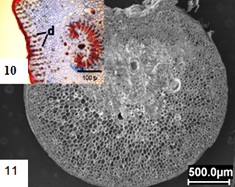 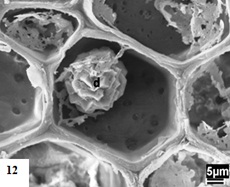 FIGURE 12. DETAIL OF THE DRUSE (d) IN THE PETIOLE CORTEX IN SCANNING ELECTRON MICROSCOPY

ACKNOWLEDGEMENTS: CAPES for providing scholarships and financial support by FAPESPA.CONCLUSION: We can conclude that the anatomical study of leaves and petioles was of great relevance and contributed largely to obtain anatomical information about this plant. It was also possible to get parameters for quality control, aiming at contributing to the quality assurance of raw materials obtained from such species as the starting point for further studies.