ABSTRACT:A simple, sensitive, linear, precise and accurate RP-HPLC method for simultaneous estimation of Zaltoprofen and Paracetamol in bulk and tablet formulation was developed and validated. The proposed RP-HPLC method utilizes Phenomenex C18 column (150 ×4.6 mm i.d., 5 µm), optimum mobile phase consisted of isocratic run of Phosphate buffer (pH-4.2): acetonitrile (40:60V/V) with the effluent flow rate of 1.0ml/min, and UV detection wavelength 260 nm. The developed method was statistically validated for linearity, precision, robustness, ruggedness and specificity. The method was linear over the range of 2-10 µg/ml for Zaltoprofen and 8-40 µg/ml for Paracetamol. The mean recovery was 99.27% and 99.76% for Zaltoprofen and Paracetamol respectively. The intermediate precision data obtained under different experimental setup was quite concurrent with less critical %RSD. The proposed method can be useful in the quality control of Zaltoprofen and Paracetamol in their combined dosage form.

Comparative effect of Paracetamol and NSAID or their combination in post operative pain management, rheumatoid arthritis and short term treatment of cancer pain has been reported.2-4 Combined Paracetamol treatment may increase the effect and decrease the dose dependent side effects of NSAID5 Paracetamol is official in Indian pharmacopoeia and describes UV-visible spectrophotometric titration method for its estimation6 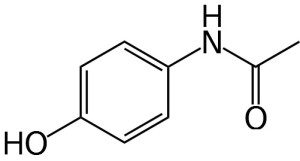 Addition of Paracetamol to NSAID is well tolerated and effective in the treatment of osteoarthritis. Therefore a novel combination of Zaltoprofen with Paracetamol will be a potent analgesic and anti inflammatory drug for future in the pain management.8

The aim of the present work is to develop easy, economic, accurate, specific and precise RP-HPLC methods for simultaneous determination of Zaltoprofen and Paracetamol in combined solid dosage form and validate the newly developed method.

MATERIALS AND METHODS:             Reagents and equipments: A gratuitous sample of

A High Performance Liquid Chromatography system, with LC solutions data handling system (Shimadzu-LC2010) with an auto sampler was used for the analysis. The data was recorded using LC 2010 solutions software. The purity determination performed on a stainless steel column 150 mm long, 4.6 mm internal diameter filled with Octadecylsilane chemically bonded to porous silica particles of 5mm diameter (Phenomenex C18, 5m, 150mm x 4.6 mm, ) with the mobile phase containing acetonitrile and phosphate buffer (pH  4.2) in the ratio of 60:40 v/v at ambient temperature. Flow rate was kept at 1.0 ml/min and the elution was monitored at 260 nm.

Stock solutions of standard drugs ZALTO and PCM were prepared by weighing accurately 25 mg of ZALTO and 100 mg of PCM into a 100 ml volumetric flask. About 70 ml of the mobile phase was added and sonicated to dissolve the drugs completely. The volume was made upto 100 ml with the mobile phase and filtered through 0.45 μm membrane filter. From the above prepared standard stock solution, 5 ml was taken to 50 ml volumetric flask and the volume was made up with the mobile phase to obtain a concentration of 25μg/ml and 100μg/ml for ZALTO and PCM respectively.

Estimation of Zaltoprofen and Paracetamol in tablet formulation:

Twenty tablets were weighed and average weight was calculated. The tablets were crushed to fine powder. An accurately weighed quantity of tablet powder equivalent to 100mg PCM and 25mg ZALTO was sonicated with 60ml diluent for 15minutes and the volume was made to 100ml with diluent. The solution was filtered and 5ml of clear filtrate was diluted to 50ml with diluent. The resultant solution (0.4ml) was further diluted to 10.0ml with diluent, so that final concentration of 10µg/ml for Zaltoprofen and 40µg/ml for Paracetamol on the basis of labeled claim was obtained.  Five replicate sample solutions were prepared in similar manner.

Specificity No interference was detected at the retention time of ZALTO and PCMin sample solution.

Linearity of developed HPLC method was studied by obtaining calibration curves of ZALTO and PCM at five different concentration levels ranging from 2-10µg/ml for Zaltoprofen and 8-40µg/ml Paracetamol. Table 2 shows the linearity data of ZALTO and PCM. The equation for regression line was y = 13071X+62147 (R2= 09996) for Zaltoprofen and y = 49963X+84052 (R2= 0.9999) for Paracetamol. The results show that  an excellent correlation exists  between  response  factor  and  concentration  of drugs  within  the  concentration  range indicated above. 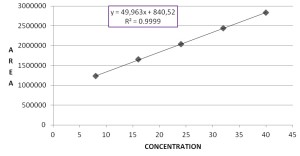 The accuracy of the method was determined by recovery experiments. The recovery studies were

carried out at three levels of 80, 100 and 120%  in triplicate and the percentage of recovery was calculated shown in Table 3. The mean recovery of the drugs was found to be in the range of 98- 102% and % of RSD is less than 2, indicating a high degree of accuracy for the developed method.

Calibration curve was repeated for 5 times and the standard deviation (SD) of the intercepts was calculated. Then LOD and LOQ were measured as follows.

TABLE 5:  LOD AND LOQ DATA OF ZALTO AND PCM

Robustness: To evaluate the robustness of the developed RP-HPLC method, small deliberate variations in the optimized parameters were made in chromatographic conditions like of mobile phase composition, flow rate and pH which bare shown in Table 6.

The system suitability parameters and precision are evaluated and found within the limits. A plot is drawn between concentration of component and instrument response. It is found to be linear in the concentration range 2-10μg/ml and 8-40μg/ml for ZALTO and PCM respectively with good correlation coefficient (R2 = 0.999). Precision and accuracy from the developed method are expressed in % RSD and % of recovery of active pharmaceutical ingredient respectively. All system suitability parameters were found within the limit as shown in table 7.

CONCLUSIONS: The proposed HPLC method was found to be economical, simple, sensitive, accurate, precise, specific and robust and can be used for the routine quality control analysis of ZALTO and PCM in bulk as well as in tablet formulation.

ACKNOWLEDGEMENTS: The author thankful to my college, N.R. Vekaria institute of Pharmacy, Junagadh and Swapnaroop pharmaceutical Ltd. Aurangabad and Yarrow chem, Mumbai for gift sample of pure Zaltoprofen and Paracetamol.