ABSTRACT: Rapid, simple, sensitive and accurate spectrophotometric methods have been developed for the determination of Trimetazidine in pure and pharmaceutical formulations. Various methods were developed for estimation of trimetazidine .but a simple extractive photometric method using has not been developed .This method is based on the formation of chloroform soluble ion pair complex of Trimetazidine with bromothymol blue (BTB) in buffer of pH 5.0 with absorption maximum at 409nm. Reaction conditions were optimised to obtain the maximum colour intensity. The absorbance was found to increase linearly with increase in concentration of Trimetazidine. Calibration graph was plotted and the correlation coefficient was found to be 0.998.Beer's law was obeyed in the concentration range of 1- 7 µg/ml with molar absorptivity of 30*10^3 l /mol /cm .Various analytical parameters have been evaluated and the results have been validated by statistical data. This method has been successfully applied for the assay of drug in pharmaceutical formulations. No interference was observed from common pharmaceutical adjuvants.The proposed method is simple, accurate and suitable for quality control applications.

From literature review it is known that several spectrophotometric, HPLC methods have been developed for the determination of trimetazidine.

Though modern methods of analysis for purity, assay of any drug afford simplicity, speed, good specificity and excellent precision and accuracy, they involve sophisticated instruments which are not in the reach of most laboratories and small scale industries.

So an attempt was made to develop simple, sensitive accurate spectrophotometric methods for determination of Trimetazidine  by formation of an ion pair complex with bromothymol blue at pH 5.

Instruments: Spectral and absorbance measurements were made on an ELICO SL 210 UV –Vis spectrometer by using 1cm quartz cells. Shimadzu BL 2208 electronic   balance was used for weighing the sample.

Trimetazidine pure drug was obtained as a gift sample from Orchid health care. Formulation used for studies was developed by Cipla with brand name trivedon -20.

All chemicals and reagents used were of analytical grade.

Optimisation of the reaction conditions: The optimum conditions for quantitative estimation of the drug were established via a number of preliminary experiments.

Choice of organic solvent: A number of organic solvents such as chloroform, carbon tetrachloride, dichloromethane, benzene and toluene were examined for the extraction of ion pair complex in order to provide an applicable extraction procedure. Chloroform was preferred for its selective extraction of ion pair complex from the aqueous solution. Shaking time of 0.5-4min provided a constant absorbance and hence 2 min was used as an optimum shaking time throughout the experiment.

Selection of pH of buffer: The drug reagent complex extracted into the organic solvent should be stable. In order to determine the pH in which the complex formed is stable, various trials were carried out using phosphate buffers of pH 2,4,5,7. It was observed that maximum stability was observed with pH 5 buffer as evidenced by its maximum absorbance. Hence pH 5 buffer was selected to develop the method and a volume of 1ml was used for the ion pair formation.

Extraction procedure: In to a series of 50 ml separating funnel appropriate volume of  Trimetazidine solution was placed followed by 1.0 ml of buffer and 1.0 ml of BTB reagent  and shake well . Then 10 ml of chloroform was added to each funnel. The contents were shaken for 2 min and the two layers were allowed to separate.Extract was scanned between 400 to 800 nm. The λ max of Trimetazidine was found to be 409 nm.  The spectrum was shown in figure 2. 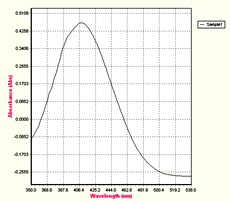 Ruggedness: Analyst variation and instrument variation were observed by taking 5µg/ml and their %RSD was calculated. results are tabulated in table 5 and 6.

Robustness: Nm variation was checked by taking 6µg/ml solution at 3 different wavelengths such as 408,409 and 410nm and their %RSD was calculated. Results are tabulated in table 7 .

Procedure for assay of drugs in dosage forms: Ten tablets of commercial samples of Trimetazidine were accurately weighed and powdered. An amount of powder equivalent to 50mg was weighed separately and made upto 50ml with distilled water. The solution was filtered and subjected to recommended procedure for the determination. The results were displayed in table 8.

Analytical data: Calibration graph was constructed by measuring the absorbance at seven concentration levels, which showed linear response of absorbance in relation to concentration of trimetazidine over the range of 1-7µg/ml. Regression analysis of calibration graphs indicated linear relationship. Table summarises the analytical parameters, molar absorptivity and the results of statistical analysis of the experimental data. The detection limits were found to be 0.216 µg/ml respectively. The repeatability of the proposed procedure was checked by performing six replicate determinations of trimetazidine. The percent relative standard deviation (%RSD) and recoveries were found to vary over the range of 0.523%and 98.035-99.99% respectively.

The accuracy of the proposed method was demonstrated by recovery experiments, which were carried out by taking  a fixed amount of pure drug to the sample matrix .the analytical results are summarised in table 9.

CONCLUSION: The results indicate that the proposed methods are precise, accurate and linear. They comply the method validation in line with ICH guidelines.

So they can be transferred from research environment to Quality Control environment to carry out the routine quality control testing of TRIMETAZIDINE as alternative methods in pure drug and in pharmaceutical formulations.