ABSTRACT: A simple headspace gas chromatographic (HS-GC) method has been developed and validated for the simultaneous determination of residual solvents like methanol, methyl isobutyl ketone, cyclohexane and toluene in luliconazole by Flame ionization detector (FID). The separation was achieved on 30 m long DB-624 column, 0.53 mm in inner diameter, and 3.0 µm in film thickness. The headspace and chromatographic parameters like flow rate and oven temperature are optimized to enhance sensitivity and chromatographic resolution. Dimethyl sulfoxide is used as diluents, equilibration temperature of 80 °C for 5 min, programmed temperature in the range of 35 °C to 210 °C and nitrogen as the carrier gas was used. The developed headspace gas chromatographic method offers good symmetry and resolution for all the residual solvents. The proposed was found to be suitable for the determination of 4 different residual solvents. Validation results indicated that the method is specific, linear, precise, accurate, rugged, and robust, where recoveries ranged between 90-110%.

Depending on risk assessment, the residual solvents are classified into 3 types:

Class-1: Solvents to be avoided

Class-2: Solvents to be limited

Hence, the detection of residual solvents is possible in gas chromatography 1. Nowadays, headspace analysis is essential in the detection of trace amounts in the sample. It is very hard to imagine an organic analytical laboratory without gas chromatography. It is the most popular technique for the analysis and separation of volatile compounds worldwide. Generally, the word “chromatography” was coined by Tswett. The development of the GC instrument was focused by Tswett, Martin, Synge and James.

Today gas chromatography has become a very important one, and its income was estimated up to $ 1 billion, and 30,000 instruments of GC are working annually 2. Headspace is a separation technique in which volatile material that is estimated from the sample and injected into a gas chromatography for the analysis and separation. The sample compound in headspace does not depend on their volatility but also on their affinity of the sample phase. This process is generally described as the partition coefficient, and it is defined as the ratio of the concentration of molecules between 2 phases. The headspace technique is mainly affected by temperature, pressure, sample matrix, and equilibration time 3. The chemical name of Luliconazole is 2-[(2E,4R)-4-(2,4-dichloro-phenyl)-1,3-dithiolan-2 ylidene]-2-(1,H-imidazole-1-yl). The chemical structure of Luliconazole is mentioned in Fig. 1.

It is an imidazole antifungal drug that is used as a topical cream medication used for the treatment of athlete’s feet, jock itch and ringworm that is caused by trichophyton rubrum, Microsporum gypsum and Epidermophyton floccosum 4. The exact mechanism of action of Luliconazole is to inhibit the enzyme lanosterol 14-demethylase synthesis, which results in decreasing the amount of ergosterol 5-6.

A literature survey has reported that several analytical techniques were found for the estimation of luliconazole by LC 7, RP-HPLC 8, 9, HPTLC 10, 11, TLC 11, and UV 12, 13 methods. The aim of the present study was to determine residual solvents, mainly methanol, methyl isobutyl ketone, cyclohexane, and toluene in the pure drug of Luliconazole. 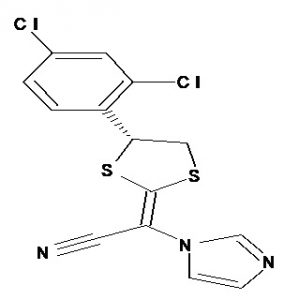 Instrument: The analysis was performed on Agilent gas chromatography model number 7697A headspace sampler using the DB-624 column and FID detector with nitrogen as a carrier gas. The chromatographic and Headspace conditions are mentioned in Tables 1 and 2.

Standard Stock-II Preparation: Pipette out 1 ml of the above solution in 100 ml volumetric flask make up to the volume with diluent. Pipette 5 ml of above-prepared solution in headspace vial and seal the vial.

Test Sample Preparation: Weigh accurately about 50 mg of the test sample (Luliconazole API) and transfer into 50 mL volumetric flask add some amount of diluent, vortex it for 5 min. Then make up the volume with diluent and mix well. Pipette 5 ml of above-prepared solution in headspace vial and seal the vial.

Procedure: Prepared solutions are taken into 5 ml headspace vial, seal the vials with the help of crimper. The prepared standard and sample solutions are subjected to headspace analysis.

Analytical Method Development: Several trails are carried for the development and the simul-taneous estimation of residual solvents in luliconazole. Finally, a better separation was achieved by better resolution and good peak shape mentioned in Fig. 2.

Linearity: The linearity study of all residual solvents ranges from 25-150 ppm for methanol, cyclohexane, methyl isobutyl ketone and toluene (r2>0.999) for the amount of solvent estimated in by the proposed methods was in good agreement.

The results are summarized in Table 3. The calibration graphs for all residual solvents are mentioned in Fig. 3, 4, 5, and 6. 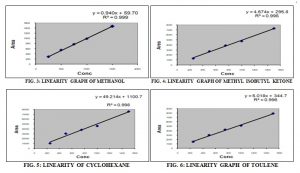 System Suitability: System suitability was carried out by injecting 6 injections. %RSD responses of each solvent were found to be less than 15%. Hence the system is suitable to carry out the analysis for the estimation of residual solvents in Luliconazole.

Accuracy: The average recoveries of the Methanol, Methyl isobutyl ketone, cyclohexane, and toluene were 107.3%, 110.9%, 102.5%, and 107%, percentage RSD was less than 15%, which indicate that the method was accurate and the results are mentioned in Table 8. The chromato-gram of accuracy is mentioned in Fig. 13.

Robustness: The robustness of the method was checked by changing flow rate and was found that the parameters were within limits; the %RSD was found to be less than 2%; hence the method is robust. The chromatogram of robustness is mentioned in Fig. 14.

Ruggedness: The ruggedness of the method was checked by observing by the different analysts, and the result was found to be in the specified limits; the % RSD was found to be less than 2%. The chromatogram of ruggedness is mentioned in Fig. 15.

FIG. 16: CHROMATOGRAM OF LOD AND LOQ

CONCLUSION: From the above experimental results and parameters it was concluded that this newly developed method for the estimation of residual solvents of methanol, cyclohexane, methyl isobutyl ketone and toluene in Lulucinazole API was found to be simple, precise, accurate, specific, robust, rugged and high resolution and shorter retention time makes this method more acceptable and cost-effective, and it can be effectively applied for routine analysis in research institutions, quality control department in industries, approved testing laboratories, bio-pharmaceutical and bio-equivalence studies and in clinical pharmacokinetic studies in the near future.

ACKNOWLEDGEMENT: The authors are thankful to the faculty of the Institute of Pharmaceutical Technology, Sri Padmavati Mahila Visvavidyalayam, for technical support and discussions.

CONFLICTS OF INTEREST: The authors have declared no conflicts of interest.