INTRODUCTION:Maraviroc is one of a new class of antiretroviral drug known as CCR5 antagonists and only oral entry inhibitor approved for the treatment of HIV-1infection. These acts as a human immune deficiency virus type 1 (HIV-1) co receptor. Maraviroc binds to the human chemokine receptor CCR5 preventing the interaction of HIV-1 gp 120 and CCR5 necessary for CCR5 tropic HIV 1 to enter cells 1, 2. 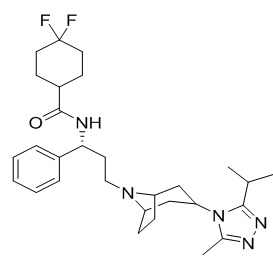 Maraviroc belongs to BCS class III drug. Along with its poor water solubility it also have only slight solubility in most of organic solvents, but it have good solubility in Phosphate buffer pH 7.4 5.

MATERIALS AND METHODS: Literature survey reveals that several analytical methods have been reported for the estimation of Maraviroc by HPLC method 6, 7. Apart from above no other work in the literature reported about the UV Spectrophotometric method for the analysis of Maraviroc in pharmaceutical formulations. Thus there is need to develop simple and economical method for routine analysis of Maraviroc. The objective of present study was to develop and validate simple, accurate, precise, robust and economical method for estimation of Maraviroc in bulk and pharmaceutical formulations as per ICH Guidelines 8.

Precision: Precision of the method was studied as intraday and Interday variations. Intraday precision was determined by analysing the 15 μg/ml of Maraviroc solution for 3 times in the same day. The interday precision of the method was also evaluated using two different analysts, day and different systems in the same laboratory. Precision was expressed as percentage relative standard deviation (Table 2).

Accuracy: To the preanalyzed sample solution, a known amount of standard stock solution was added at different levels, i.e. 50%, 100% and 150%.The solution was reanalyzed by proposed method.

Ruggedness: Ruggedness of the proposed method is determined for 15 μg /ml concentration of Maraviroc by analysis of aliquots from a homogeneous slot by two different analysts using same operational and environmental conditions.

LOQ and LOD: The limit of detection (LOD) and limit of quantification (LOQ) of proposed method were determined by using calibration curve. Maraviroc LOD and LOQ were calculated as 3.3σ/S and 10σ/S, respectively, where σ is the standard deviation of Y intercept (ICH guidelines) and S is the slope of the Maraviroc calibration curve.

Analysis of Marketed Formulations: Twenty tablets of marketed brand of Maraviroc were weighed; average weight was determined and triturate to fine powder. An accurately weighed quantity of tablet powder equivalent to 150mg of Maraviroc was taken and extracted with 50 ml of Phosphate buffer (pH 7.4) solution under sonication for 30 min .The Volume was made up to 100 ml with Phosphate buffer and mixed; above solution was filtered through Whatman filter paper No. 41. A 1 ml portion of the filtrate was further diluted with phosphate buffer pH 7.4 in a 10 ml volumetric flask up to mark (10μg/ml) on label claim basis. The absorbance of the resulting solution was measured at 210 nm against solvent blank. The results of analysis are shown in (Table 7).

The correlation coefficient was 0.999 indicating excellent linearity (r2 > 0.999). The representative linear equation was y = 0.020x + 0.118, calculated by the least squares method.The stock solutions and working standards were made in Phosphate buffer (pH 7.4). Linearity range and calibration curve is presented in Figure 3.

Precision: The precision of the method was expressed in terms of % relative standard deviation (%RSD).

The % RSD values found to be less than 1 for intraday and interday precision, the precision data showed a good reproducibility. The result is expressed in Table 1. 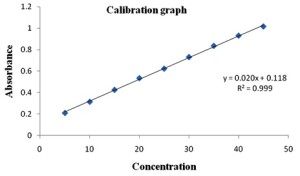 Repeatability: Repeatability was determined by analyzing 15μg/ml concentration of Maraviroc solution for six times and %RSD was found to be 0.00148, which is less than 2. The result is expressed in Table 2.

Limit of Detection (LOD) and Limit of Quantification (LOQ): The LOD and LOQ of Maraviroc were determined by using standard deviation of the response and slope approach as defined in International Conference on Harmonization (ICH) guidelines. The LOD and LOQ were found0.10428 μg/ml and 0.315 μg/ml respectively.

Accuracy (Recovery Test): As an additional check on the accuracy of the method was studied by recovery experiments. The recovery assay values for Maraviroc ranged from 100.7 to 103.9 with SD value not more than 1.5 which indicates good recovery at 50 % to 150% estimation of Maraviroc (Table 3). No organic solvent is required for the extraction of Maraviroc from formulation which reduces the cost of estimation.

Ruggedness: Ruggedness of this method was determined by analyzing the Maraviroc by two different analysts and the respective absorbance was noted and the results were indicated as percentage RSD (Table 4).

Robustness: Robustness of this method was determined by analyzing the Maraviroc in two different temperatures, room temperature and at 29oC. From the below mentioned data (Table 5), it was observed that the method is robust enough to analyze Maraviroc Tablet.

TABLE 6: RESULTS OF ANALYSIS OF FORMULATIONS

CONCLUSIONS: A spectrophotometric method for quantifying Maraviroc in formulation samples has been developed and validated. The proposed method is simple, accurate, precise, economical, robust and can be used for routine analysis of Maraviroc in bulk and Pharmaceutical formulation.

ACKNOWLEDGMENT: The authors are thankful to Hetro Lab, Hyderabad for providing gift samples. Authors are also thankful to The Principal K.L.R Pharmacy College, Paloncha, Andhra Pradesh, for permitting to carry out research work.