ABSTRACT: Two spectrophotometric methods are presented for the simultaneous estimation of Zaltoprofen (ZLT) and Paracetamol (PAR) in laboratory prepared mixture and pharmaceutical dosage form without prior separation. Method (1) is simultaneous equation method (Vierodt’s method); which depends on the fact that absorbance of a mixture is the sum of the individual absorbance of the components. Method (2) is Q-Absorbance ratio method, which depends upon the fact that, the ratio of absorbance at any two wavelengths is a constant value independent of concentration or path length. Absorbances are measured at two wavelengths one being the λ max of ZLT (227.5 nm) and other being a wavelength of equal absorptivity of the two components (236 nm). Calibration curve of the two methods are linear over the concentration ranges of 4- 9μg/ml and 8-13μg/ml for PAR (247.5nm) and ZLT respectively. The two methods proved to be simple specific, accurate and precise. Solvent used is HPLC grade methanol. The two methods are validated as per ICH guidelines were accuracy, precision, repeatability and robustness are found to be within the acceptable limit.

INTRODUCTION: Zaltoprofen (ZLT) is a non-steroidal anti-inflammatory drug1. The chemical name of ZLT is (±)-2-(10, 11-dihydro-10-oxodibenzo [b, f] thiepin-2-yl) propionic acid .CAS No is 747411-43-6. Zaltoprofen selectively inhibits cyclooxygenase-2 activity and prostaglandin E2 production. It is used in the treatment of Rheumatoid arthritis, Osteoarthritis, and other chronic inflammatory Pain conditions ZLT is a unique compound that also has anti-bradykinin activity 1, 2, 3. Paracetamol (PAR) Paracetamol or acetaminophen, chemically named as N-acetyl-p aminophenol, is a widely used analgesic and antipyretic (fever reducer). 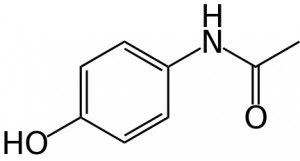 Zaltoprofen is marketed in combination with Paracetamol under the Trade Name REDUCIN A by JB Chemicals &Pharmaceuticals Ltd, Mumbai. Literature reveals that there are many   methods for the individual determination of Zaltoprofen and Paracetamol; but to the best of my knowledge no methods are cited for the determination of Zaltoprofen and Paracetamol in combined dosage. So, it was proposed to develop an economical, rapid and simple Ultraviolet spectrophotometric method for the simultaneous estimation of these drugs in combined dosage forms 4, 5,

Microsoft Excel was used for handling data and calculation

Zaltoprofen RS was kind gift from Intas Pharmaceuticals, Assam. Paracetamol RS was purchased from Indian Pharmacopoeia Commission, Ghaziabad. Purity of the compounds was checked according to the pharmacopoeia specification.

REDUCIN A (Paracetamol 325mg and Zaltoprofen 80 mg) Manufactured by JB Chemicals and Pharmaceuticals (P) Ltd, Mumbai was obtained from the local market

ZLT and PAR  stock standard solution (1 mg/ml) prepared by dissolving 100mg of ZLT and PAR respectively in few millilitres of methanol into a 100 ml volumetric flask by sonicating, then completing the volume with methanol.

Linearity and construction of calibration curves

Accurately measured aliquots equivalent to 1-30 μg PAR and 1-15μgZLT are transferred from their working standard solution in to two series of 10 ml volumetric flasks and complete to volume with methanol. The spectra of prepared standard solution are canned from 210-300nm

Calibration curves are constructed relating the absorbance of zero order spectra of ZLT at 227.5(λmax of ZLT) nm and 247.5 nm(λmax of PAR) and PAR at 247 nm and 227.5 nm versus the corresponding concentrations and regression equations are computed

Overlay spectra of 8μg/ml ZLT and PAR 8μg/ml were used to determine isoabsorptive point. Calibration curves are constructed relating the absorbance of zero order spectra of ZLT at 227.5nm (λmax of ZLT) and 235.5(isoabsorptive point) and PAR at 227.5 and 235.5nm versus the corresponding concentrations and regression equations are computed.

Application of simultaneous equation method and Q absorbance ratio method for the determination of ZLT and PAR in laboratory prepared mixture.

Solutions containing different ratio of ZLT and PAR were prepared by transferring accurately measured aliquots from their standard working solution in to a series of 10 ml volumetric flasks and the volume was made with methanol. The final concentration range were 8-13μg/ml ZLT and 4-9μg/ml PAR. Zero order absorption spectra of these different laboratory prepared mixture were recorded from 210-300nmusing methanol as blank and procedure under linearity for each method was then followed. Concentrations of ZLT and PAR in the prepared sample were calculated from the corresponding computed regression equations.

To determine the content of ZLT and PAR in commercial tablets, twenty tablets of REDUCIN A (B.NO:XRX2001, MFG AUG 2012, EXPJUL2014) marketed by JB Chemicals and Pharmaceuticals (P) Ltd, Mumbai were taken. Each tablet labelled to contain 325 mg PAR and 80 mg ZLT. Tablets were weighed and finely powdered and coating was removed. A portion of powder equivalent to 50mg PAR was weighed accurately and transferred in to a 50 ml volumetric flask.10 ml methanol was added and sonicated for 10 mints, filtered through Whitman filter paper in to a 50 ml volumetric flask. The residue was washed three times each with 10 ml methanol and the solution was completed to the mark with the same solvent. The general procedure described above under each method was followed to determine the concentration of both drugs in prepared dosage form solution. The analysis was carried out 6 times. Concentrations of ZLT and PAR in the prepared sample were calculated from the corresponding computed regression equations.

The main task of this work was to establish simple, sensitive and accurate analytical methods for the simultaneous estimation of ZLT and PAR in their pharmaceutical dosage form with satisfactory precision for good analytical practice (GAP). The overlapped absorption spectra of ZLT and PAR (Fig 3) hinder their determination by direct spectrophotometry especially in the high concentration of PAR as in the dosage form

The simultaneous equation method was applied to solve the mixture of PAR (X) and ZLT (Y) of overlapping spectra by constructing two equations based upon the fact that at λ1(λmax of PAR) and λ2 (λmax of ZLT) the absorbance of the mixture is the sum of the individual absorbance of  PAR and ZLT.ie,

FIG6: CALIBRATION CURVE OF PAR AT 227.5NM IN METHANOL. 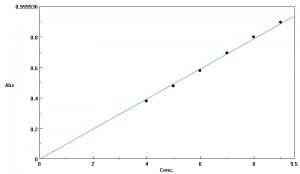 FIG7: CALIBRATION CURVE OF PAR AT 475.5NM IN METHANOL. 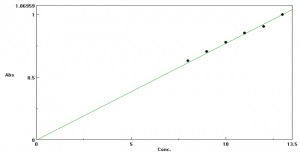 FIG8: CALIBRATION CURVE OF ZLT AT 227.5NM IN METHANOL.

FIG9: CALIBRATION CURVE OF ZLT AT 247.5NM IN METHANOL.

The absorption spectra of PAR(X) and ZLT (Y) show severe overlapping that prevents the use of direct spectrophotometry for the analysis of either PAR or ZLT without preliminary separation. According to literature, the absorbance ratio method depends on the property that for a substance which obeys Beers Law at all wavelengths, the ratio of absorbance at any two wavelengths is a constant value independent of concentration or path length (Q value).

Absorbance are measured at two wavelengths one (λ2) being the λmax of ZLT (227.5nm) and the other (λ1) being the wavelength of the equal absorptivity of the two components, i.e., isoabsorptive point(236nm).

FIG11: CALIBRATION CURVE OF PAR AT 236NM IN METHANOL.

FIG12: CALIBRATION CURVE OF ZLT AT 236 NM IN METHANOL.

Validation of the methods has been performed according to ICH recommendations

Linearity. The calibration range for PAR and ZLT was established through consideration of the practical range necessary according to Beers –Lamberts law. The linearity response was determined by analysing 6 independent levels of concentrations in the range of 4-9μg/ml at 247.5 nm for PAR and 8-13μg/ml at 227.5 nm for ZLT for Simultaneous equation method and at 236 nm for Q Absorbance Ratio method. Fig 6-9 shows the linearity .The values of correlation coefficients of

PAR and ZLT were close to unity indicating good linearity.The characteristic parameters for the constructed equations are summarized in Table 1 and Validation data are mentioned in Table 2.

Precision. The intraday precision was carried out through 3 replicate analyses of 4μg/ml, 6μg/m, 9μg/ml of PAR and 8μg/ml, 10μg/ml and 12μg/ml of ZLT respectively. The interday precision was also carried by using above mentioned concentrations of pure samples for 3 consecutive days. The developed method is found to be precise as the %RSD value for intraday and interday precision were less than the ICH limit.

TABLE 2: SUMMARY OF VALIDATION PARAMETERS FOR THE PROPOSED METHODS

a :The intraday (n = 3), average of concentrations;10,2.4615μg/ml PAR and ZLT respectively, repeated three times within the day.

Accuracy: Accuracy was assured by applying standard addition technique where good percentage recoveries were obtained establishing the accuracy of the proposed method. The recovery studies were carried out by adding known amount of reference standard to samples at 80%, 100% and 120 %level and analysed.

Sensitivity: The limit of detection (LOD) and limit of quantitation (LOQ) were determined from y-intercept and slope of calibration curve according to ICH guidelines.

Robustness: Solutions of both the drugs in

methanol were studied for their stability at ambient temperature for 24 h. Absorbance variation was found to be less than 1%.

CONCLUSIONS: Simple, rapid and sensitive method is proposed for the simultaneous analysis of ZLT and PAR with overlapping spectra. The proposed method does not require any sophisticated mathematical treatment for the absorption data. The ZLT and PAR were well resolved and quantified without prior separation by simple mathematical treatment. The application of the proposed method was validated by the determination of both the drugs by in several laboratory prepared mixture and in pharmaceutical tablets with good accuracy and precision, therefore the developed method is adequate for routine quality control analysis of the formulation.