ANALYTICAL STUDY OF CHINCHA KSHARA THROUGH MODERN PARAMETERS LIKE XRD, SEM AND EDS

ANALYTICAL STUDY OF CHINCHA KSHARA THROUGH MODERN PARAMETERS LIKE XRD, SEM AND EDS

ABSTRACT: Analytical study of Ayurvedic preparations is the need of present scientific era. Though the Ayurvedic drugs are time tested and have been used successfully in the management of various ailments, it is now necessary to prove their quality, efficacy and safety to the scientific world through various modern analytical parameters. Chincha kshara is an important preparation mentioned in ayurvedic classics for the management of various diseases. An attempt has been made in the present study to prepare Chincha kshara and analyse the physical nature, surface morphology and chemical constituents present in the Chincha kshara through analytical parameters like organoleptic properties, pH value, X-ray diffraction technique (XRD), scanning electron microscopy (SEM) and energy dispersive X-ray spectroscopy (EDS). XRD study of Chincha kshara showed the presence of potassium carbonate hydrate as major and minor peaks and sodium chloride, potassium calcium hydrogen carbonate phosphate hydrate, silver phosphate and magnesium phosphate oxide as minor peaks. SEM revealed its amorphous nature and EDS reported the significant presence of Potassium (50.44%) and Oxygen (46.07%) in Chincha kshara.

INTRODUCTION: Analytical study plays an important role in the standardization of the drugs. Ayurveda, the ancient system of medicine is gaining recognition throughout the World and many herbal, metallic and mineral drugs are now clinically tested and accepted. However, one of the impediments in the acceptance of these medicines is the lack of standard quality control profiles. The quality of the drug that is the profile of the constituents in the final product has implication on its efficacy and safety.

Due to the complex nature and inherent variability of the chemical constituents of these drugs (herbal, metallic and mineral), it is difficult to establish their quality control parameters. Therefore modern analytical techniques are expected to help in circumventing this problem. Hence highly sensitive modern parameters are employed for gaining information about identity, form, surface morphology and structure of contents of the formulation.

Kshara are alkaline substances obtained by processing the ash of drugs. Chincha kshara is considered one among the Kshara ashtaka1. Acharya Charaka 2, Susrutha 3 and Vagbhata 4 described the properties of Kshara in detail. Detailed description regarding the preparation of various types of Kshara and their properties has been mentioned under Kshara kalpana. Kshara are considered as Anushastras because they do chedana, bhedhana, lekhana etc. actions which are possible by using sharp instruments (Shastras) 5. Chincha kshara is prepared from Chincha Phala twak or Kanda twak. Chincha kshara possesses rich medicinal values and is used as an important ingredient in various formulations which are used in the management of Shula, Agnimandya, Gulma, Mutrakricchra, Ashmari etc 6.

In the present study, Chincha kshara was prepared according to the reference mentioned in Sarangadhara Samhitha11/102-104 and it was subjected to different analytical tests like organoleptic properties, pH value, XRD, SEM and EDS for the identification of crystalline materials, surface morphology and chemical composition.

Procurement of Raw Materials: Dried Chincha phala twak was collected from Adilabad district of Telangana. Authentication was done on the basis of pharmacognostical characters.

pH Value: pH test was carried out to know the nature of Chincha kshara.

X-ray Diffraction Technique: X-ray Diffraction was Performed to identify the crystalline materials present in Chincha kshara. 1 g of Chincha kshara was taken and powdered in agate mortar to very fine powder. It was mounted in a sample tray of machine. X-ray beam bearing a wavelength of 1.5418740 Ȧ from copper source is passed on the sample. Detector was set to identify diffracted beams between 10 - 70 degrees of 2 range. Obtained values were plotted on graph with the help of inbuilt “Reyflex Software” for further analysis.

Scanning Electron Microscopy: Scanning electron microscopy (SEM) was conducted to know the surface morphology of Chincha kshara. Sample of Chincha kshara was analyzed directly by keeping it on the specimen holder and observed under the scanning electron microscope at 1,000 KX - 10,000 KX magnifications. Micrographs were taken with the inbuilt camera.

Energy Dispersive X-ray Spectroscopy: EDS was performed to know the chemical composition of Chincha kshara. Sample of Chincha kshara was placed on the specimen holder and subjected to Energy-Dispersive X-ray spectroscopy (EDS). When the sample is bombarded by the SEM's electron beam, electrons are ejected from the atoms comprising the sample's surface. The resulting electron vacancies are filled by electrons from a higher state and an X-ray is emitted to balance the energy difference between the two electrons' states. The X-ray energy is characteristic of the element from which it was emitted.

pH value of Chincha kshara is 13.

TABLE 3: SHOWING THE DETAILS OF MATCHING PEAKS OF XRD DATA FOR CHINCHA KSHARA 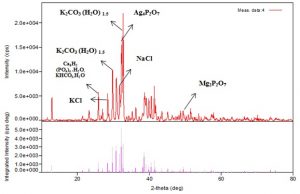 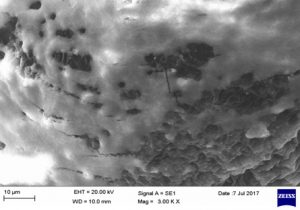 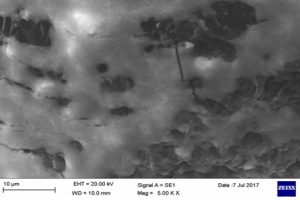 TABLE 4: SHOWING THE QUANTITY OF THE ELEMENTS IN CHINCHA KSHARA 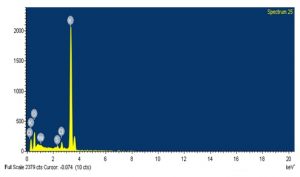 DISCUSSION: Kshara kalpana is an important dosage form described in various authoritative texts of Ayurveda. Kshara are obtained from the drugs of animal, mineral and plant origin. It is mentioned in the classics, that the diseases which are difficult to treat can be cured by Kshara therapy 7. Due to the inherent properties present in Kshara they are extensively used in the management of various diseases. Kshara play a very important role in surgical

procedures in the form of Kshara sutra for the management of ano-rectal diseases like piles, fistula etc 8. In the recent era application of Kshara sutra in ano-rectal disease has become a common practice in ayurvedic surgical parlance. Various Kshara were used in number of Ayurvedic preparations but the elemental composition of Kshara still remained less studied. So, to throw adequate light on the analytical aspects of Chincha kshara this study has been conducted. Organoleptic properties of Chincha kshara are white colour fine powder with salty taste having characteristic odour and soft to touch. (Table 2)

XRD is a rapid analytical technique used for the phase identification of crystalline materials and provides information on unit cell dimensions. It gives the fingerprint characterization of crystalline materials and determination of their structure. Each crystalline solid has its unique characteristic X-ray powder pattern, which may be used as a "fingerprint" for its identification. Size and the shape of the unit cell for any compound can be detected most easily using the diffraction of X-rays. XRD of Chincha kshara showed its crystalline nature. The predominant peaks in the sample corresponded to major phase comprising K2CO3 (H2O)1.5 (Potassium carbonate hydrate). Single minor peak of Sodium chloride, Potassium calcium hydrogen carbonate phosphate hydrate, Silver phosphate, potassium chloride and Magnesium phosphate oxide were observed. (Table 3) (Fig.1)

SEM is an analytical technique that uses electron beam rather than light to form a figure. It is capable of producing high resolution figures of a sample surface, which means that closely spaced features can be examined at a high magnification. Due to the manner in which the fig is created. SEM Fig. have a characteristic three dimensional appearance and are useful for determining the surface structure of the sample. It can magnify objects to extreme levels where even structure of nano particles could be clearly visible. SEM micrographs of Chincha kshara depicted its amorphous nature and porous morphology. Particles were adhered together as agglomerates.

There was no definite pattern in their structure. This may be due to hygroscopic nature of Kshara. (Fig. 2 and 3) EDS is an analytical technique used for elemental analysis or chemical characterization of a sample. It relies on the investigation of an interaction of some source of X-ray excitation and a sample.

This analysis confirmed the significant presence of elements like potassium and oxygen. Chlorine was present in trace amounts. Presence of oxygen in higher amounts in Chincha kshara may be due to the absorption or adsorption of environmental oxygen by its hygroscopic nature. (Table 4) (Fig. 4)

CONCLUSION: From the present study, it can be concluded that Chincha kshara has high alkaline nature due to the presence of elements like potassium and oxygen in significant amounts. The result obtained from these analytical tests, only re-establishes the fact explained by our Acharyas regarding the properties of kshara. This echoes the vast knowledge and deep insight of our Acharyas in designing Kshara kalpana as a separate dosage form. The current observations can be considered as a lead for further studies on other Kshara.