ABSTRACT: Matricaria pubscens (Asteraceae), with wide distribution area in southern Algeria, is a drug traditionally used in the treatment of certain diseases such as dehydration, cough and sore.  The aim of this study was to determine the anatomical features of the root stem and leaves of medicinal species of M. pubscens sections. As a result of the study, it was discovered that in the root the vessels arranged in short multiple radial; the fibers are thin-walled thick, Vascular bundles are separated by large unlignifid rays.Most vessels in the central part are plugged with dark-staining substances. The anatomical structure of the leaves is isobilateral mesophyll and palisade parenchyma nearly two epidermises and spongy parenchyma in the middle, the leaf was bifaceous. The surface of the epidermis is covered with glandular hairs, the stomata were diastatic. The extract of aerial part of M. pubscens has significant amounts of Phenols, Flavonoids and Steroids, however tannins are present an average amount; the Alcaloids are present in lowest amount.

INTRODUCTION: Algeria has a rich culture of herbs and spices, which includes about 2,000 species and has a large geographic area with high potential abilities. More than 80% of the world's inhabitants relies on traditional medicine for their primary health care needs and has found a place in the life daily 1. Macroscopic and microscopic clarification of medicinal plants is the leading step towards crafting the identity and cleanliness of these resources and must be done before testing. The acquaintance of the histological structure of the different organs of the plant that contains the active substance is also very important 2.

The anatomical feature are an aid in the recognitionof morphological characteristics many plants.  Wherefore, it is essential that the anatomical details of the authentic material of the drug should be prepared in the form of diagnostic characters in the identification and the differentiation between closely related species to avoid any vagueness 2.

Asteraceae is a vast plant family that comprises roughly 1500 genera and 25,000 species in different habitats 3. This family consists of vegetation quite distinct, which ranges from herbs, subshrubs, and shrubs to trees 4.  This vegetation is found into diverse habitats once it has a greatenvironmental adaptation 5.

Matricaria with about seven taxa, Are dominant in Europe, Central Asia, North America and North Africa 6 - 8. Matricaria pubescens (Deaf.)  Is an endemic species well known “called guertoufa” and particularly found in the northern and central Sahara 9, 10. Is a small annual plant, 7-15 cm in height up to 40 cm in plant cultivates, with many prostrate stems, which erect.   Flowering takes place in springtime in the northern Algerian Sahara, at any time after the rain in the central Algerian Sahara. Matricaria pubescens is a popular herb used in traditional medicine in Algeria against several diseases, it has antiseptic properties and has been used for instance rheumatism, digestive diseases, diarrhoea and aching joint; it was prepared as an infusion or powder and used internally 11. Stems and pounded leaves are used as a filter for butter goats, providing a delicious smell of butter and aid in maintaining has also been added to the traditional soup and donate the foodstuffs a very agreeable aroma.

The objective of this work was to establish a relation enter anatomical organizations comprising natural produce in various tissues of the plant; In addition to the phytochemical screening methods have been applied to detect the main groups of these classes of chemical compounds.

Plant Materials Collection: Plant material was collected from region of south East Algeria, Eloued city [34.017571, 6.454652]. The whole plants was collected after that the species was identified using Ozonda's Flore (1983) and the taxonomic was done. All parts of plants collected were  dried  at  25°C  in the dark  to avoid  the photooxidation  of  phenolic  compounds,  and  in  a  well ventilated  and  stored  for  the extraction part .

Anatomical study: Fresh plants were collected softly since normal Sahara areas; for the anatomical explanation of the fragment has been segmented by hand, in transverse section. The sections were prolonged in (sodium hypochlorite at 12 °C.) for 20 minutes to bleach the cells, then rinsed with distilled water and then with 1% acetic acid for 1 min. The sections were stained by double staining with methyl green and Congo red accordance with the usual techniques of plant anatomy 14.

Screening of crude extract: The phytochemical screening tests for the extracts were affected for the diverse constituents of the plant. The crude extracts were detected for the presence or absence of metabolic compounds such as alkaloids, steroidal compounds, phenolic compounds, flavonoids and tannins using standard procedures 15-16. Color intensity or precipitate formation was used as analytical responses to these tests.

Phytochemical screening: The extract of aerial part of M.pubscens has significant amounts of Phenols, Flavonoids and Steroids, however tannins are present an average amount. The alkaloids are present in lowest amount Table 1.

Macroscopic features: Matricaria pubescens (Deaf.) is an endemic species well known and particularly found in the northern and central Sahara Fig. 1. Annual plant with dark green tuft lying then straightened rods. Is a small annual plant, 7-15 cm in heightup to 40 cm in plant cultivates, with many prostrate stems, which erect, rower. Leaves Hairy dissected and green darkens, The leaves alternate, sessile, thick, fleshy, are divided into strips;  Involucres of bracts straw yellow with a broad membranous margin, the deeply dissected leaves, with each of the lobes ending with a white tip are slightly fleshy and are between 1 and 3 cm long.  Flowers in all tubes, surmounted string in a peeling longer membranous, rejected on one side, the flowers are yellow tubular, their heads are about 5 to 8 mm in diameter and are set at the ends of the stems and  grouped in hemispherical discoid heads, Flowering generally occurs in spring season and at all times after it rains in the Algerian central Sahara.The fruits are achenes very small, yellowish-white with a short pappus membranous to aid the dispersion (Ozenda., 1983). 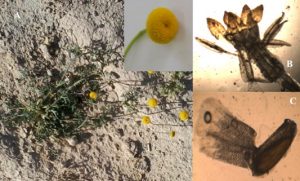 FIG. 1: MATRICARIA PUBCENS (DESF.), ASTERACEAE. (A) ENTIRE PLANT GROWN IN THE SAHARA IN SOIL SAND. (B) A FLOWER. (C) AACHEN

The leaf: Cross-section showed that, the leaf has an axial and adaxial epidermis isobilateral covered with cuticle Fig. 2, whereas the cuticle is omitted in stomatal area. Stomata’s are present on both sides of the leaf, which is in view of kidney-shaped surface.The glandular and no glandular trichomes of M. pubscens are capitates on the Surface of epidermis Fig 3. The internal cells of palisadic parenchyma layers are dense with chloroplasts, and the spongy parenchyma in the middle. Palisadic parenchyma is more regularly arranged in tow layer than the central cells of the mesophyll Fig. 2. Three vascular bounds a central and two laterals are distributed; each collateral bundle consists of xylem and phloem. The midvein has large bundle consists of nearly more than twelve rows of tracheary elements. Each row has two or three xylem elements. The phloem occupies the lower side of leaf. It consists of sieve elements with companion cell, phloem parenchyma and phloem fibers. 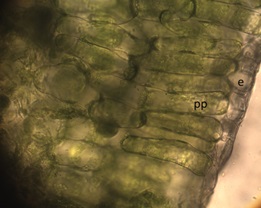 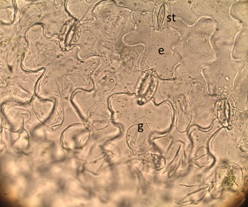 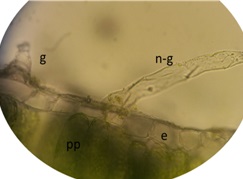 The root: A cross-section of the root appears as a complete circle Fig. (4A). The old root of M. pubscencs is composed of three common zones: the periderm, the pricyclic derivatives and the vascular tissues. The phelloderm layers comprised of more than fifteen thick layers of elongated and compacted cells; the outer zone is the covered bark of Suberine. The cortex parenchyma occupied large area and is composed of large elongated cells. The major part of the roots is reserved by xylem

elements Fig. (4 and b). There are thin walled ray parenchyma cells between these xylem elements. The xylem consists protoxylem vessels outwardly metaxylem vessels inside connected by connective tissue with the phloem. From the cross section one notices vessels arranged in multiple radial short, the fibers are thin to thick walled; the vessels are thick-walled and are separated by large unquoted rays Fig. (4B). Most vessels in the central part are plugged with dark-staining substances Fig.(4B). 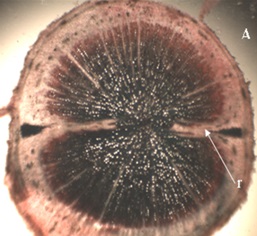 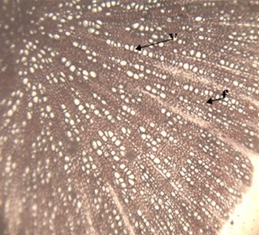 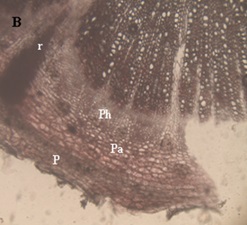 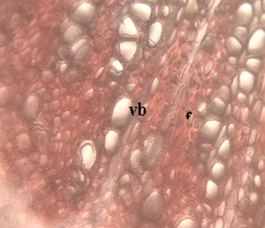 The stem: A transverse section of the stem reveals, the epidermis made up of a single layer of compactly radially arranged cells, protected with a thick cuticle Fig 5. The epidermis contains glandular trichomes. The cortical region is formed by one to two layers of angular collenchyma and for about four layers of parenchymatic cells. Cortex is distinguished to collenchymatous cells 5 – 8 layers thick. The vascular system is collateral, consisting of several continuous bundles, distributed in a single ring. Isolated sclerenchyma fibers are located externally to the phloem, forming caps. Vascular cylinder is eustele, and composed of 10–12 bundles each with will defined patches of phloem and well defined xylem vessels. The sclerenchymatous interfascicular region is located between the vascular bundles. Pith is broad and homogeneous, consists of round, thin-walled polygonal parenchymal cells Fig. 5. 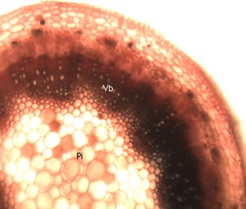 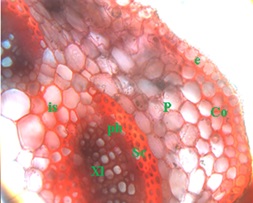 DISCUSSION: The anatomical study of plant organs based on morphological and anatomical variations, such as venation models, types of stomata, the type of trichomes, secretion system and mesophyll with differentiated structures 17. A few anatomical studies on the M. pubescens species have been found in the literature. This study provides suitable information on the morphology and structure composition of M. pubscens. From the cross section one notices vessels arranged in multiple radial short, the fibers are thin to thick walled; the vessels are thick-walled and are separated by large unquoted rays. Most vessels in the central part are plugged with dark-staining substances. The anatomical characteristics of the medicinal taxon M. pubscens, the anatomical information of the root, stem and leaf of the Asteraceae family, were reported 18.

Some morphological properties are used as taxonomic characters such as leaf feature, shape and length of stem and capititule properties 19. Although, results that some differences are represented, can generally be consistent with the description of the flora of Algeria 13.  The stem anatomy of M. pubscens is composed of epidermis, cortex, corticular vascular bundles with distinguishable cambium formation and parenchymatic pith. The results are constant with the other research 20. The anatomical structure includes the Asteraceae family studied by Metcalfe and Chalk (1979) as characteristics of this species. The structural organization of the leaves is similar to most species of the Asteraceae family, is composed of two epidermis, the lower and the upper, including the stomata, the parenchymatous mesophyll and the vascular bundle 20, 21.

The upper epidermis cells are covered with cuticle 22, the glandular and noglandular trichomes of M. pubscens are capitates. Similar glandular trichomes were found in   most specie’s of Asteraceae family 23. The essential oil present in M.pubscens can be found in glandular trichomes and secretory ducts 24-25. The mesophyll tissue of leaves of any species varies according to the number of cell layers that make up the palisade parenchyma and the spongy parenchyma 26. In the case of M. pubscens, the mesophyll is isobilateral; two layers of palisade parenchyma close to the epidermis and the spongy parenchyma in the middle, also other result reported in other spaces such as Vernonia psilophylla 17 - 26.

CONCLUSION: This work has contributed to expand the information about Martucaria pubscens, utilizing usual techniques of microscopic analysis of plants. It was shown that the root, stem and  leaf blade of M. pubscens present the  characters of, morphology and anatomy for the M. pubscens, Which are valuable in the identification the other species which are also important factors for the control of the quality of plant resources. In South Algeria adverse environments, plant species grown in sand area, have many anatomical traits in different plant organs to withstand drought. The anatomical characteristics of the stems such as the presence of thick cuticles, the epidermis with thick walls and the presence of subepidermal under layments, as well as stains of sclerenchymatic fibers as supporting and protective source, parenchyma cortex shrunk as response to drought resistance. Anatomical traits in Z. album leaf are the presence of highly organized palisade mesophyll lead to isobilateral anatomical structure and the occurrence of water storage tissues.