Vismia guianensis (Aubl.) Choisy is a tree that belongs to the secondary vegetation in rainforests. This study aimed to perform anatomy analysis by light microscopy; scanning and microchemistry of the leaves of V. guianensis. Tri stratified upper epidermis with intense cutinization and unistratified inferior epidermis was observed. The stomata found are paracytic and the trichomes arranged in rosettes are glandular, multicellular, stellate shape covered with cuticle, which were present on the abaxial surface. Parenchyma cells with idioblasts containing druses of calcium oxalate crystals were also found. The mesophyll is dorsiventral and the midrib is concave on the adaxial surface and convex on the opposite surface. The microchemical tests detected the presence of starch grains in the chlorophyll cells and phenolic compounds dispersed in the palisade tissue and abaxial surface. Alkaloids in the epidermis and in the sclerenchyma cells surrounding the vascular bundles and the midrib xylem, dispersed flavonoid in the palisade parenchyma and trichomes, fatty substances as content of the secretory ducts and reducing sugars in the palisade and epidermal cells were found. These anatomical features were fundamental in the identification and characterization of the species.

INTRODUCTION:Vismia guianensis (Aubl.) Choisy belonging to the Clusiaceae family is a native South American species, which can be found in Colombia, Venezuela, Guyana, and Brazil, more precisely in the secondary vegetation forests in the states of Amazonas, Pará, Maranhão, Bahia, and Minas Gerais 1. Commonly known as “seal”, “fever-tree”, “seal-gum”, “seal stick” or “white seal”, it is a small tree measuring 3-7 meters height, open and irregular crown with new rust-puberulous branches whose leaves are green in the upper region and yellow in the lower one 2.

This species provides beautiful red-colored wood with thin and light veins, fibrous tissue, regular durability; it is suitable for construction, deluxe joinery and carpentry. The bark is very thick and therefore, used to cover houses 3. Surveys made in different Brazilian regions especially in the state of Pará, report its use in folk medicine. Kerharo 4 highlights its use primarily in the treatment of dermatosis, presenting itself as a potent laxative 2, and its leaves are used as tonic 5 and have antipyretic and anti-rheumatic properties 2.

According to the current law, to obtain any kind of product derived from medicinal plant, quality control is required from the cultivation, management and harvesting of plant species, to the manufacture of intermediate product up to obtaining the formulation 6. As a result, the starting point when working with a plant specimen is to analyze its morpho-anatomical characteristics and chart its composition profile, which may vary according to the climatic characteristics of the place and time of harvesting. This study examined the morphological and anatomical characteristics of V. guianensis leaves through light and scanning electron microscopy, and microchemical tests, outlining its identity profile and surface composition.

Collection and botanical identification of plant material: The plant material was obtained from the Associations of Herb Vendors Ver-O-Peso Market in Belém Metropolitan Area, District Icoaracy (1°17’46” S; 48°27'58.02" W), collected in the end of March 2008. Species identification was performed by Dr. Mário Augusto G. Jardim, a botanist from the Goeldi Museum, where a voucher specimen is deposited in the museum herbarium, under the MG registration number: 2500133.

Optical microscopy: Plant material was fixed in FAA70 7 for 48 hours and preserved in alcohol 70 ⁰ GL. For sections, hydration was processed with gradual reduction of alcohol concentration (70%, 50%, 30%, and distilled water) at intervals of 30 minutes, at the total of two hours. Sections were stained with basic fuchsin and astra blue 8. Sections of 8 µm thick were made with a rotating microtome to make the permanent slides. To obtain images of structures of in vivo and fixed material, a stereomicroscope coupled to photographic equipment, model XSZ-150Ai (Medlux) was used.

Microchemical tests : Freehand cross-sections were made, and then, subjected to clarification with 50% sodium hypochlorite. The sections were washed in distilled water and transferred to slides.   To test the occurrence of phenolic compounds, 10% ferric chloride substance was used 9; alkaloids with Dragendorff substance 10, reducing sugars with Fehling  substance 11; flavonoids and anthraquinones with 5% potassium hydroxide substance 10, starch with Lugol  substance 12 and fatty substances with Sudan IV substance 9. 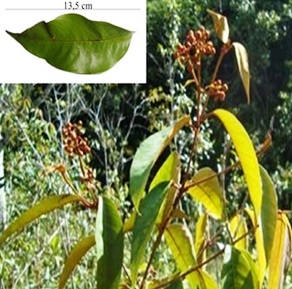 Trichomes are glandular, multicellular and uniseriate with thick walls covered with cuticle. They are present on the leaf abaxial surface, as seen in Figure 4 (arrow). Underlying the epidermis adaxial surface, there is a subepidermal layer of periclinally elongated parenchyma cells, where there are idioblasts containing druses and calcium oxalate crystals as viewed in Figure 5 (arrow).The idioblast is an isolated plant cell that noticeably differs from the adjacent cells in form, content, and parietal structure. 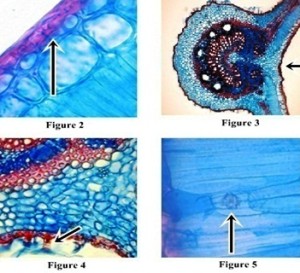 Figure 6 shows the dorsiventral mesophyll, usually consisting of a palisade parenchyma layer and a multi-stratified spongy parenchyma layer, where there are small vascular bundles involved by sheath cells.

The midrib in cross section is concave on the adaxial surface and convex plan on the opposite surface as seen in Figure 3. Next to the abaxial side, there are several layers of angular collenchyma, and in the fundamental parenchyma, the cells show regularly thickened walls.

Both in the collenchyma and in the fundamental parenchyma there are idioblasts containing druses (Figure 7). On the opposite surface, there are about four layers of this supporting tissue. The parenchymatic cells tend to distribute in a way as to penetrate among the elements of the vascular system as shown in Figures 8 and 9. In Figure 8 the collateral vascular bundle is seen in the form of an arch surrounded by a sclerenchymatic sheath (arrow-a), formed by several layers of cells. In the external phloem, there are five glands regularly distributed (arrow-b); there are sclerenchyma cells in small bundles in the fundamental parenchyma (Figures 3 and 9). 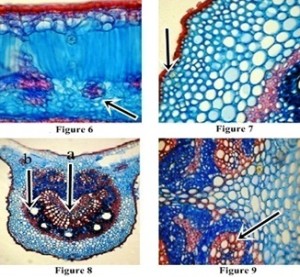 FIGURES 6-9. VISMIA GUIANENSIS (AUBL.) CHOISY LEAF BLADE SECTIONS. 6. SPONGY PARENCHYMA WITH PARENCHYMA CELLS INVOLVING VASCULAR BUNDLES INDICATED BY THE ARROW (10X). 7. MIDRIB, WITH IDIOBLASTS IN THE COLLENCHYMA (40X). 8. LEAF CROSS-SECTION (10X), SHOWING THE MIDRIB, THE FUNDAMENTAL PARENCHYMA PENETRATING BETWEEN THE ELEMENTS OF THE VASCULAR BUNDLE (IN THE FORM OF AN ARCH) AND THE EXTERN PHLOEM GLAND. 9. SCLERENCHYMA BUNDLES IN THE INTERIOR OF THE PHLOEM ELEMENTS AND THE FUNDAMENTAL PARENCHYMA (40X).

Figure 10 shows the apex of the leaf blade covered with countless trichomes (Figura10A and D) arranged in rosettes (Figure 10B). The stomata of the paracytic type are numerous, and present on the abaxial surface of the epidermis (Figure 10C). 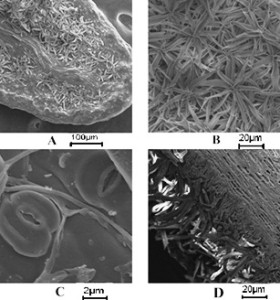 The microchemical tests performed on the leaf blade, detailed in Table 1, detected the presence of starch grains in chlorophyllous cells, in greater quantity in the palisade parenchyma than in the spongy one (Figure 11). 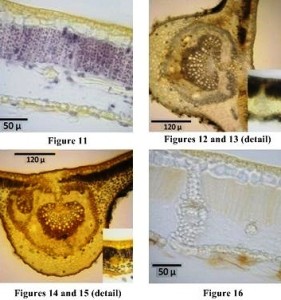 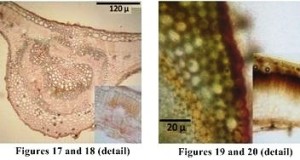 DISCUSSION:  After the acquisition of plant raw material, the botanical identification of the species was made, and the voucher specimen deposited in the herbarium of Emílio Goeldi Museum, assuring its taxonomic confirmation and avoiding any kind of misunderstanding on the misuse of other species.

The anatomical characteristics of V. guianensis leaves were also fundamental in identifying the species, since work on leaf microanatomy of this species are scarce, and those related to leaf mining are the most studied, dealing with insect-plant relationship.

Glandular trichomes, which are generally simple structures with wide variation in shape, size, content, and especially function, are seen on the abaxial surface of the leaf lamina 13. Glandular trichomes are involved with chemical protection, through release of lipophilic substances 14. Although the occurrence of trichomes is not common in the Clusiaceae family 15 studies of Almeida-Cortez and de-Melo-Pinna 16 reported the presence of trichomes on the abaxial surface of V. guianensis.

Idioblasts containing druses of calcium oxalate crystals scattered throughout the epidermis and mesophyll were other structures quite evident. These structures were found both in the collenchyma and in the fundamental parenchyma, supporting studies of Almeida-Cortez and Melo-de-Pinna 16 who demonstrated the presence of idioblasts containing druses in the mesophyll and secretory cells present only in the spongy parenchyma of Vismia.

Metcalfe and Chalk 17 and Cronquist 15 described the presence of calcium oxalate crystals for the Clusiaceae family, as well as phenolic idioblasts, which are associated to protection of the plant against attack by herbivore microorganisms 18.

Therefore, the leaf anatomy of the studied species, seen through optical or electronic microscopy has similar characteristics to those observed by Metcalfe and Chalk 17. These characteristics are perfectly situated in the general context of the family: dorsiventral mesophyll, thick cuticle, paracytic stomata restricted to the abaxial side, hypodermis only in adaxial surface in one or several layers, calcium oxalate crystals of the druse type usually present and wide occurrence of secretory ducts.

Anthraquinones are organic compounds that can be considered as oxidation products of phenols; the same way, the reduction of quinones can lead to the corresponding phenols 20. In living plants, the relationship between the reduced and oxidized forms depends on several factors: temperature, light, moisture, especially in the harvest season. Generally, the reduced forms appear in early growing season of plants and in the fruits; then, sharply decrease their content and at the end of the annual period of development, the oxidized forms prevail 21.

As evidenced, the studied specimen is in its early stage of maturation, so, the solution of 10% KOH identified only the presence of flavonoids (in their reduced forms) dispersed in the mesophyll, especially in the palisade parenchyma, trichomes and in lower concentration in the walls of sclerenchyma cells, and xylem. There was no presence of anthraquinones, which is the oxidized form of a phenol component.

The presence of fatty substances as content of secretory ducts is in agreement with Monacelle et al. 19, who showed that secretory cavities in the mesophyll consisting of uniseriate epithelium were full of lipidic substances.

CONCLUSION:            The morphological and anatomical characteristics of V. guianensis leaves helped to identify the species, as well as outlined aspects of their surfaces. The adaptation of the plants to their environment depends partly on these aspects, as the chemical and/or morphological characteristics of the leaf surface determine, for example, the amount of light absorbed or reflected, the degree of hydrophobicity of the organ, the vapor pressure of air in contact with the leaves and the efficiency of the organ to defend itself from parasites and pathogens.

ACKNOWLEDGEMENTS: To the financial support of the Coordination of Improvement of Higher Education Personnel CAPES and the Research Foundation of the State of Pará -FAPESPA.