INTRODUCTION: Ageing is a continuous, progressive and deleterious process 1, 2. Learning impairment and memory loss are the consequences of aging 3. Ageing also enhances the possibility of death 4. Nootropic agents like piracetam and anti-cholinesterases such as donepezil are being used for improving memory, mood and behaviour 5. But, the resulting adverse effects linked with these medicaments have made their use limited. Indian flora has already provided various lead molecules in drug discovery.

Experimental Animals: A total of 72 Swiss Albino mice of either sex weighing around 35 g (older ones, 15 months old) were obtained from the Disease Free Small Animal House, Lala Lajpat Rai University of Veterinary Sciences, (LUVAS) Hisar (Haryana).  Experimental protocol was approved by The Institutional Animals Ethical Committee (IAEC). The care of animals was taken as per CPCSEA guidelines, Ministry of Forests and Environment, Government of India (Registration number 0436). All the animals were acclimatized for seven days before starting the experimental studies. Animals were housed under standard conditions of temperature (24 ± 2 °C) and relative humidity (30 - 70%) with a 12:12 light: dark cycle. Experiments were carried out between 09:00 am-5:00 pm.

Group I: Control group for young mice received vehicle only.

Above grouping was repeated for Passive Avoidance Paradigm leading to a total of 12 groups.

Passive Avoidance Paradigm (PAP):  Passive avoidance behaviour is based on negative reinforcement. It is an exteroceptive behavioural model that measures the long term memory in mice. PAP is a box (27 x 27 x 27 cm3) having three wooden walls and one wall of Plexiglas. The base is made up of grid floor having stainless steel rods (3 mm) set 8 mm apart. There is a wooden platform (10 x 7 x 1.7 cm3) in the center of the grid floor. Electric shock of 20V (AC) was delivered to the grid floor. A 15 W bulb was illuminated in the box during the experiment. Every mouse was placed gently on the central wooden platform. Shocks were delivered for 5 sec as soon as mouse stepped down and placed all its paws on the grid floor and the step-down latency (SDL) was recorded. SDL is the time taken by the mouse to step down from wooden platform to grid floor with its entire paw on the grid floor. Retention was tested after 24 h in a similar manner, except that the electric shocks were not applied to the grid floor, with an upper cut-off time of 300 sec 11.

Elevated Plus Maze (EPM): Elevated plus maze consists of two open arms (16 x 5 cm2) and two closed arms (16 x 5 x 12 cm3). These arms are extended from a central platform (5 x 5 cm2), which is raised to a height of 25 cm from the floor. On the first day (14th day of administration of PS and MBS), every mouse was kept at the end of one of the open arms, facing away from the central platform. Transfer latency (TL) is that, when animal move with its entire four legs into one of the covered arm. TL was assigned as 90 sec in case mice do not enter into any of the covered arms within 90 sec. It is then gently pushed anyone of the covered arms and then allowed to explore the maze for 10 sec. After this each mouse was returned to its home cage.  Retention was examined 24 hours after the first day's trial 12.

Whole Brain Acetycholinesterase Activity: The mice were decapitated and their whole brain was dissected out on 16th day and placed instantaneously in ice-cold saline. It is then weighed and homogenized in 0.1 M Phosphate buffer (10% w/v, pH 8). Centrifugation of the sample was done for 10 min (10,000 rpm). 0.4 mL of the supernatant is then added to 2.6 mL phosphate buffer (0.1 M, pH 8) and 0.1 mL of 5, 5’-dithiobis 2-nitro benzoic acid (DTNB) mixture. These contents are then mixed. Formation of the yellow colour is the end point, which is due to formation of thiocholine from acetylcholine iodide in the presence of tissue cholinesterase. The rate was measured at 412 nm in using spectrophotometer. When absorbance reaches a stable figure value, it is recorded as the basal reading. 0.02 mL acetylthiocholine is added and change in absorbance is recorded after period of 15 min. R = δ O.D X Volume of Assay (3 ml)/ E X mg of Protein, where R is Rate of enzyme activity in ‘n’ mole of acetylcholine iodide hydrolyze/min/mg of protein, δ O.D is Change in absorbance/min and E is the Extinction coefficient-13,600/M/cm 13.

Whole Brain Malondialdehyde (MDA) Levels: Whole brain of mice, after decapitation, was homogenized in phosphate buffer (0.1 M, pH 7.4, 10% w/v) in ice cool environment. The homogenate was mixed in ratio of 1:1, with tris - HCl (pH 7.4). The reaction mixture was incubated for two hours (37 °C). Mixture is centrifuged at 1000 rpm (10 minutes) after adding of Trichloro acetic acid (1 ml TCA 10% ice cold). 1mL of clear supernatant solution obtained was then mixed with of freshly prepared TBA (Thiobarbituric Acid 1 mL, 0.67%). It is heated for 10 min and then cooled instantaneously. 1ml of Double Distilled Water was added. The color developed was read at 532 nm against blank. MDA was quantified using an extinction coefficient of 1.56 ×105 M-1 cm-1.14

Whole Brain Reduced Glutathione (GSH) Levels: Whole brain of mice, after decapitation, was homogenized in phosphate buffer (0.1 M, pH 7.4, 10% w/v) in ice cool environment.  The brain homogenate was precipitated with the 4 % TCA (trichloroacetic acid). The sample was then centrifuged for 10 minutes at 5000 rpm (4 °C). 0.5 ml of supernatant is then mixed with 2 ml disodium hydrogen phosphate buffer (0.3 M, pH 8.4) and 0.4 ml of double distilled water. Then 0.25 ml of freshly prepared DTNB (0.001 M) dissolved in sodium citrate (1% w/v) was added to the above reaction mixture. The reaction mixture was incubated at room temperature for 10 min. The yellow colour developed was measured at 412 nm using UV-Visible Spectrophotometer 15. The reduced glutathione concentration was calculated as μmoles GSH/mg protein using a molar extinction coefficient of GSH is 1.36×104 M-1 cm-1.

Effect on Step Down Latency: Step down Latency (SDL) of control aged mice was found to be less than SDL of mice administered with standard drugs such piracetam (200 mg/ kg, i.p.) and donepezil (1mg/kg, i.p). Moong Bean Sprouts attenuated ageing- induced amnesia significantly, which is indicated by increase in SDL in mice, pretreated with 2% and 4% w/w MBS (Fig. 1). 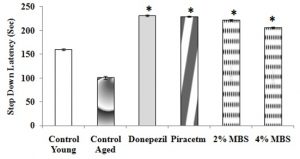 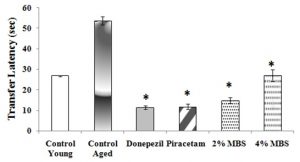 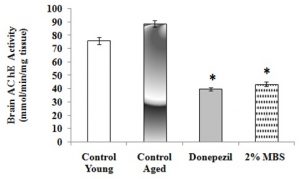 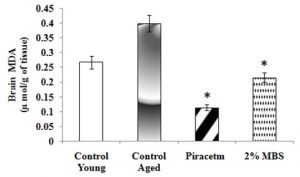 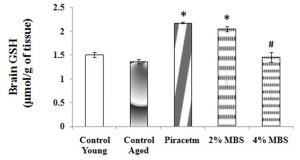 #denotes p < 0.05 as compared to control group of aged mice

DISCUSSION: Ageing process affects almost all mammalian species 1. Both the genders are equally susceptible to deleterious effects of ageing 1. With the advancement in ageing our immune, endocrine and nervous system get weakens 1, 2. Moreover, human body gets flooded with unwanted and fatal elements 2. Cardiovascular disease, diabetes, neurodegenerative diseases like Alzheimer’s disease etc, are consequences of ageing 16. People in their late 70s have greater chances of everyday forgetfulness 3. Elderly people have age associated memory impairment, which might result in Alzheimer’s disease leading to dementia 17, 18. With the advancement in age of human beings risk of developing age related neurodegenerative diseases has also enhanced 19. For living a disease free long life, features associated with ageing could be managed by changes in lifestyle 20 and consumption of healthy and nutritious diet 21.

In this study we have employed Passive Avoidance Paradigm for measuring long term memory and Elevated Plus Maze model for measuring short term memory in mice. In both the models we found that memory was enhanced surprisingly in mice administered with 2% and 4% w/w green moong bean sprouts (MBS). Acetylcholine (ACh) is the major neurotransmitter involved in cognition 22. Its activity is terminated by Acetylcholinesterase (AChE). In patients suffering from AD there is loss of acetylcholine in hippocampus area 23. The gradual death of brain cells chiefly cholinergic neurons and subsequent decline in the acetylcholine levels is the key characteristic of neurodegenerative diseases 23.

The central cholinergic system undergoes numerous changes during the physiological process of aging resulting in impairment of cholinergic pathways 24. Facilitation of central cholinergic activity by the use of anticholinesterases is presently the mainstay of the pharmacotherapy of dementia 25. By administration of green moong bean sprouts for 15 successive days AChE activity was significantly inhibited. This could have lead to synaptic accumulation of acetylcholine and facilitation of cholinergic transmission, thus reducing cognitive dysfunctions in aged mice. Polyphenols have been reported to reduce the risk of dementia and have also improved cognitive performance in elderly individuals 7. Polyphenols like vitexin, isovitexin and gallic acid exert their beneficial actions through their ability to suppress neuro-inflammation and protection of neurons against neurotoxins induced injury 26. These polyphenolic compounds are abundant in moong bean sprouts, which might manage the age related cognitive deficits.

Oxidative damage was considered a likely cause of age - associated brain dysfunction 27, 28. During aerobic respiration excessive amount of free radicals are generated that cause cumulative oxidative damage and is responsible for ageing and death 29. Various pathological progressions like age-related diseases and neurodegenerative disorders are due to the presence of excessive oxygen free radicals inside and out­side cells 30, 31. They react rapidly with nucleic acids, lipids as well as proteins. Consequently, there are cell mutations, apoptosis 32, protein injury, damage of nucleic acids and lipid peroxidation 33. Membrane phospholipids consist of polyunsaturated fatty acids (PUFA), whose oxidative decom­position is called lipid peroxidation. Aldehydic end product of lipid peroxidation is Malondialdehyde (MDA) 23.

Brain lipid bi-layer is rich in PUFA and oxygen, due to which it is highly susceptible to lipid peroxidation 23. Free radicals attack brain PUFA resulting in oxidative stress. Age related neurodegenerative diseases are consequence of oxidative stress 34, 35 or Reactive Oxygen species (ROS) 36. Glutathione (GSH) is a master detoxifier 37 that prevents oxidative stress. It is a combination of three amino acids-cysteine, glycine and glutamine 38. GSH is produced as well as recycled naturally in the body. It also regenerates other antioxidants like Vitamins C and E. Oxygen free radicals stick to the sulphur group of glutathione and excreted out of the body. Healthy body could recycle glutathione itself. But in disease state body gets overburdened with oxygen free radicals 39. Maintenance of brain glutathione levels is vital. Impairment of learning is linked to low glutathione levels due to ageing 40. Therefore, increased MDA and decreased GSH levels indicate increase in oxidative stress 41. This increased oxidative stress was remarkably decreased by administration of Moong bean sprouts by boosting the levels of GSH and declining the levels of MDA.

Estrogen replacement therapy has been suggested to promote cognitive functions 42. Moong bean sprouts possess phytoestrogens like isoflavones and coumestrol 9. As reported earlier consumption of higher levels of phystoestrogens improve congnition among elderly individuals 43. They exhibit neuro-protective role in age related disorders, through neurogenesis, reduction in amyloid plaques and enhancement of memory 44. Moreover, moong bean sprouts are rich source of fibre, which decrease formation as well as accumulation of cholesterol. Thus, sprouts of green moong bean could aid the management of age related memory loss (Fig. 5). In consideration of the above research work, it would be beneficial to clinically explore the potential of moong bean sprouts in managing age related cognitive dysfunctions. 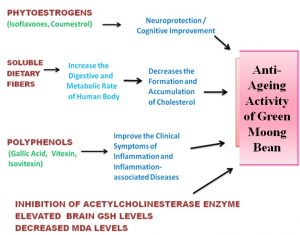 CONCLUSION: Cognitive dysfunctions are consequence of aging. Increase in lifespan has resulted in a progressive rise of deleterious diseases linked to aging. Diet rich in antioxidants and nutrients like phytoestrogens could be utilized for improving age related memory deficits. In the present study, pre-treatment of animals with moong bean sprouts (MBS) for 15 consecutive days, reduced transfer latency and enhanced step down latency in aged mice thus indicating improvement in learning and memory of aged animals. Presence of healthy nutrients like polyphenols further contributes to the anti-ageing activity of moong bean.

The findings of the current research work finally reveals anti-cholinesterase and antioxidant characteristic of green moong bean, which is indicated by decline in acetylcholinesterase activity, increase in GSH level and decrease in the MDA levels respectively. Therefore, it would be valuable to clinically discover the potential of moong bean sprouts in age related cognitive deficits.