ABSTRACT: Herbal fungicides are gaining great interest because of their cost-effective and eco-friendly attributes. If this antifungal potency resides in weeds, it will be a great advantage because of their large population and to effectively develop a novel drug from weeds being considered as waste material. The present study aims to assess the anti-aspergillus activity of a common weed Lantana camara. The crude extract of leaves was obtained using polar and non- polar solvents and tested against Aspergillus niger ATCC 16888.  Results reveal, the aqueous extract showed maximum growth inhibition of 14 ± 0.142 mm zone at 30 mg/ml, and it was 37 ± 0.124 mm for the standard antifungal agent voriconazole at 30 mg/disc. Further, the minimum inhibitory concentration of the extract was calculated as 18 mg/ml. Experiments on the mode of action suggested that the extract lyse the cells and alter the membrane integrity by depleting the ergosterol content, which avoids the reoccurrence.

INTRODUCTION: For many centuries, it is a known fact that humankind depends on plants as an indirect source of energy and shelter. It has been found that near about 80% of all established natural products originate from plants 1. Natural products continue to play an important role in the discovery and development of new pharmaceuticals as clinically useful drugs as starting materials to produce synthetic drugs. If this antifungal potential resides in weeds, it will be a great advantage because of their large population and to effectively develop novel drugs against Aspergillus sp., which is responsible for Aspergillosis in human and different plant diseases especially in vegetable plants such as onion, tomato, maize, grapes, etc.

Although, the synthetic fungicides are effective in control diseases, indiscriminate application caused severe health hazards in animal and humans due to their residual toxicity 2, 3. Furthermore, the danger alarm on resistance development in pathogenic microorganisms restricts the use of synthetic fungicides, which seriously hinders the management of diseases of crops and agricultural products 3. These undesirable attributes of synthetic fungicides demand alternative treatments that are less hazardous to humans and animals and less impact on the environment. Extracts isolated from several plants have been reported to have a biological activity such as antimicrobial, antifungal, anti-inflammatory and anti-oxidant activities 4.

Lantana camara also is known as Spanish flag, or West Indian Lantana is a species of flowering plant in the Verbenaceae family. It has been introduced into other parts of the world as an ornamental plant and is considered as an invasive species in many tropical and subtropical areas.

Its various parts are used in the conventional and traditional system of medicine for the cure of several problems, which include itching, inflammation, and tumors 5. Table 1 depicts brief details on the constituents and application Lantana camara and suggested the immense application of the extracts of Lantana camara.

TABLE 1: ACTIVE CONSTITUENTS AND APPLICATIONS OF THE EXTRACTS OF LANTANA CAMARA

Collection of Plant:   Leaves of Lantana camara Fig. 1 collected from different parts of Tamil Nadu, India, and authenticated by Siddha Hospital and Research Institute, Chennai. The leaves were washed with tap water once, subsequently with distilled water (X2) and shade dried under room temperature. The dried leaves were powdered well and stored in a plastic airtight container and used for the experimental studies. 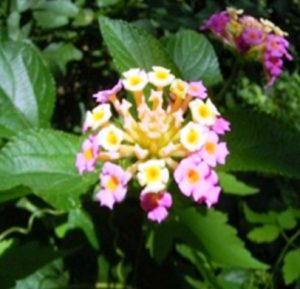 FIG. 1: THE IMAGE OF THE LANTANA CAMARA PLANT USED IN THE PRESENT STUDY

Preparation of the Extract: The air-dried and coarsely powdered leaves extracted using Soxhlet apparatus. About 10g of the dried powder extracted with water and methanol individually. The resulting extract was concentrated using roto evaporator and stored in a sterile container at -4 °C until use.

The anti-aspergillus activity of leaf crude extract of Lantana camara: The anti-aspergillus activity of crude extract of Lantana camara leaves assessed using the protocol of CLSI (M 44-A and M 38-A) by microdilution method 6 and disc diffusion method (Andrews). In brief, for the disc diffusion method, a lawn of inoculum containing 1 × 107 CFU/ml of conidial spores of A. niger was made in the Petri dish containing pre-sterilized Czapek dox medium. The plain sterile disc with (a) sterile water; (b) methanol and (c) with aqueous extract at different concentration was placed in the center of the lawn and incubated at 25 °C for 4 days. Voriconazole was used as a standard antifungal agent at 30 mg/disc (Hi-Media, India) concentration. Antifungal activity was determined by measuring the zone of inhibition in mm.

About broth microdilution method, step 1 is the preparation of the stock inoculum suspension, and it was prepared from a 7-day old culture grown in potato dextrose agar slants using 1% Tween 80.  In step 2, RPMI 1640 with L-glutamine, buffered at pH 7.0 with 0.165M Morpholine propane sulphonic acid was used as the dilution medium. The crude extract was diluted with the medium for 100 times, and 100 μl of the diluted sample was dispensed into 96 Well plates. The conidia obtained from step 1 was also diluted in RPMI stock solution and dispensed and incubated at 35 °C for 24, 48, and 76 hours. Triplicate experiments were conducted and the mean value was recorded. Minimum fungicidal concentration (MFC) was also determined by subculturing method, and the least concentration showing no visible growth was considered as MFC.

Mode of Action: To determine the exact target of extracts of L. camara concerning A. niger, followed by exposure to the extract, determinations on the lesion of the plasma membrane and variation in ergosterol content was determined according to the procedure summarized below;

In brief, for the determination of lesion of the plasma membrane, the spore suspension of A. niger containing 4 × 106 spores/ml was taken in a glass test tube and to that extract was added in the increasing concentrations. The mixtures were then incubated for 12 h at 28 ± 2 °C in an incubator shaker. After 12 h of incubation, the mixture was suspended with 15ml of Czapek dox Agar medium and allowed to solidify. The plates were incubated at 28 °C for 4 days and observed the growth of the organism. Water and methanol were used as controls.

Concerning ergosterol content determination, an amount of 100µl containing 107 spores/ml of A. niger inoculated in a Czapek dox broth medium. The extract was added at increasing concentrations. Samples without any plant extracts were considered as controls. The flasks were incubated at 28 °C for 4 days for the generation of mycelia in the medium. After incubation, the mycelia were harvested and washed twice with distilled water. The net weight of the cell pellet was determined. Five milliliters of 25% alcoholic Potassium hydroxide solution was added to each sample and vortex for 2 min, followed by incubation at 85 °C for 4 h. Sterols were extracted from each sample by adding a mixture of 2 m l sterile distilled water and 5 ml n-heptane. The mixture was then sufficiently mixed by vortex for 2 minutes allowing the layers to separate for 1 hour at room temperature. The n-heptane layer was analyzed using Jasco J715 spectropolarimeter at room temperature, using a circular quartz cell with a path-length of 0.1 cm.

RESULTS AND DISCUSSION: Combating fungal contamination in materials of food, leather, cotton, books, etc., is a challenging task. The existing antifungal agents though restrict the growth of the fungus at the time of exposure, the reoccurrence is a major drawback realized.  In most of the antifungal agents of azole family exhibit reoccurrence considerably. Moreover, the side effects shown by these synthetic antifungal agents restrict its application at a greater level. Hence, a suitable non-toxic antifungal agent from natural sources is badly required. In traditional medicines, most of the plant extracts showed potential antifungal activity. However, antifungal activity concerning A. niger is meager. However, some of the weeds and ornamental plants showed anti-aspergillus activity at an appreciable level. Hence, the present study has been taken up to assess the anti-aspergillus activity of a plant, namely Lantana camara.

Thin layer chromatographic analysis was done for L. camara but with differences in the solvent system due to the solubility of different constituents in different solvents having antifungal activity. The spot found at the Rf value of 0.511 in L. camara might be the presence of Flavonoids as depicted by Qaisar et al. 7 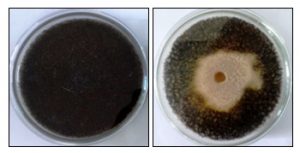 FIG. 2: ANTI-ASPERGILLUS ACTIVITY OF AQUEOUS EXTRACT OF L. CAMARA (a) Control plate of A. niger (b) The zone of inhibition of A. niger towards L. camara extract.

The bioautography analysis was performed as described by Qaisar et al. 7 and zone of clearance near the spot was observed, which indicates the presence of active antifungal components Fig. 3. The flavonoid component in L. camara contains pharmacological activities and is commonly present in medicinal herbal weeds. Concerning the minimum inhibitory concentration determination by microbroth dilution method, we observed MIC50 as 18 ± 0.2 mg/ml and MIC 90 as 25 ± 0.6 mg/ml. 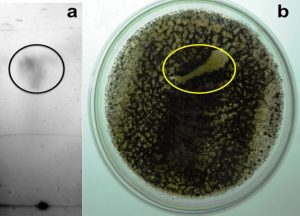 Further, the absence of growth of A. niger at the concentration of 18 mg/ml and 25 mg/ml observed from the lesion of plasma membrane studies suggested that lysis of plasma membrane after exposure to the water extract of L. camara. According to Rodriguez et al., 8 ergosterol, the major sterol component of the cell membrane is responsible for cell function and integrity.

Kelly et al., 9 suggested that growth inhibition by antifungal agents reduces the ergosterol biosynthesis. In the present study, an about more than 75% reduction in ergosterol content was observed with the aquoues extract of L. camara Fig. 4. 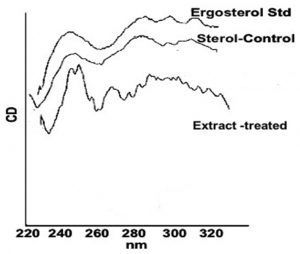 FIG. 4: CD SPECTRUM OF ERGOSTEROL CONTENT OF A. NIGER AFTER TREATMENT WITH THE WATER EXTRACT OF LANTANA CAMARA

Kalita et al., 10 reported that L. camara has a wide spectrum of medicinal properties. Srivastava and Singh 11 reported the antifungal activity of L. camara against Alternaria sps. The reason for the anti-aspergillus activity of water extract of L. camara could be due to the presence of flavonoids, triterpenes, and terpenoids. Further research exploration is required for these active constituents.

CONCLUSION: Use of traditional medicinal plants for human health is well known.  However, to combat fungal growth, special attention is needed, because of high nuisance and health impact.

A number of synthetic agents shown to reduce fungal growth but fails in controlling the reoccurrence and thus necessitates the need for potential and safe antifungal agents. In the present, a weed plant has been chosen to study the anti-aspergillus activity of its extract. L. camara was the plant chosen, and its water extract was studied for anti-aspergillus activity by measuring the zone of inhibition, minimum inhibitory concentration, lesion of the plasma membrane, and quantification of ergosterol content.

The results revealed that the aqueous extract of L. camara shown appreciable zone of growth inhibition, and MIC 90 was calculated as 25 mg/ml. At this MIC concentration, a lesion in the plasma membrane was encountered, and more than 75% reduction in ergosterol content was observed. It has been understood from the literature that the presence of triterpenes and terpenoids could be the reason for the anti-aspergillus activity. Thus, these results suggested that aqueous extract could be a suitable anti-aspergillus agent. However, much more scientific explorations are required before going for clinical applications.