ABSTRACT: This study reports the potential of a marine mollusk, Chicoreus sp., as a producer of peroxisome proliferator activated receptor-gamma (PPAR-γ) ligand that activate the scavenger receptor class B type 1 (SR-B1) for anti-atherosclerotic activity. The objective of this study is to determine the cytotoxicity of the obtained compound C35, with a molecular weight of 270.1 and the level of SR-B1 expression of a hepatocellular carcinoma cell line (HepG2) after treatment with the compound. Various concentrations of compound C35 were treated against HepG2 to determine its cytotoxicity level (MTS assay) and against transfected HepG2 with SR-B1 promoter (luciferase assay). A non-toxic result obtained in MTS assay where the IC50 is exceeding 100 µg/mL. For luciferase activities, the compound increases the transcriptional regulations of SR-B1 promoter at specific effective concentrations of 12.5 µg/ml with 1.8-fold higher as compared to the positive control. The compound increased the transcriptional regulations of SR-B1 promoter activity and subsequently increased the luciferase activity of the assay system which also reflects the ability of it as a ligand for PPAR-γ. The efficiency of these compounds was comparable to the liver receptor homolog-1 (LRH-1) suggesting that Chicoreus sp. have the potential as a source for an anti-atherosclerotic agent.

INTRODUCTION: Atherosclerosis is a condition in which an artery wall thickens as a result of a build-up of fatty materials such as cholesterols, that later lead to coronary heart disease which is responsible for the greatest number of deaths in the world 1. To fight atherosclerosis, many new drugs have been designed which targeted at a specific pathway that plays a major role in the formation of the disease.

One of the important pathways in reducing the risk of atherosclerosis is reverse cholesterol transport which is a pathway that facilitates the transportation of cholesterol from extrahepatic cells and tissues to the liver for excretion processes 2. The release of high-density lipoprotein (HDL) can reduce the formation of atherosclerosis by transporting the low-density lipoprotein (LDL) from the bloodstream to be deposited in the liver.

However, lack of cell-mediated receptor disturbs the release of HDL into the bloodstream which will lead to atherosclerosis formation in the blood vessel. SR-B1 is one of the receptors in reverse cholesterol transport that acts as mediator or receptor for HDL metabolism before it is transported to peripheral tissue.

Recently, the marine organism has been identified as a better source of novel molecules of bioactive material compared to its terrestrial counterparts and plants 3. Therefore, marine diversity is indeed ‘the gold mine’ in bioprospecting for natural products as drug candidates. In this report, the potential of Chicoreus sp., a marine mollusk as a producer of PPAR-γ ligand that activates the SR-B1 for the anti-atherosclerotic study were determined.

Compound Extraction and Isolation: Extracts from Chicoreus sp. were obtained by using methanol and repeated for three times to maximize the extraction. Methanol was removed by using a rotary evaporator to give methanol crude extract. The extract then was fractionated through solvent partitioning technique with the ratio of solvent to water is 1:2. The solvent used was diethyl ether and butanol.

Butanol extract was selected and subjected to C18 reverse phase column chromatography with the solvent 9:1 of water to methanol. 38 fractions were collected, and fraction 35, 36 and 37 were combined because, on the Thin Layer Chromatography, it had the same pattern of a single spot. The combined fractions then were labeled as C35 and further identified with Gas Chromatography-Mass Spectrometer. A single spot on TLC can be an indicator for a single compound present in the sample.

Cytotoxicity Test: Compound C35 first was prepared to 10 mg/mL of a stock solution by diluting 10 mg of the compound to 1 ml of DMSO. Then the serial dilution of the compound was obtained by diluting the stock sample into nine various concentrations from 0.39 to 100.00 µg/mL in the growing culture of modified eagle media (MEM) containing 1% amino acid, 1% sodium pyruvate, 1% antibiotic (Penicillin and Streptomycin) and supplemented with 10% fetal bovine serum (FBS) at 37 °C with 5% of carbon dioxide.

After 72 h, IC50 value of the sample were determined by using 3- (4,5-dimethylthiazol-2-yl)-5-(3-carboxymethoxy phenyl) -2-(4-sulfophenyl) -2H-tetrazolium (MTS) reagent. IC50 value is referring to the concentration of the drugs or samples which inhibit 50% of the cell growth. Lower IC50 value indicates higher toxicity of the crude extract on the tested cells. IC50 was determined by using a formula:

Luciferase Assay: Compound C35 then was treated on stable transfected HepG2 with SR-B1 gene. It was used as a model to determine the anti-atherosclerotic activity of isolated compounds on the ability as PPAR-γ ligand. The cells were seeded into 96-well plate and incubated for 24 h to obtain a uniform and monolayer cell distribution with approximately 30000 cells per well. Before the treatment process, 95 µl of new complete media with 0.5% FBS were added into each well of the respective 96 well micro plates. Compound C35 was diluted in a two-fold dilution ranging from 0.78 µg/mL to 25 µg/mL and was treated onto the cells. The treatment was incubated for 24 h at 37 °C with 5% of carbon dioxide supplement.

The positive control for the SR-B1 promoter activity was liver receptor homolog-1 with a concentration of 0.02 µg/mL was used throughout the experiment. After 24 h of incubation, 50 µl of ONE-Glo™ Luciferase assay reagent (Promega, USA) was added into the wells to ensure that the reagent and the sample were homogenized evenly. After 10 min of incubation, the luciferase activities were measured using the Glomax®-Multi Detection System (Promega, USA). The luciferase activity of the HepG2-SRB1 was determined by normalizing each well reading with the value of negative control (cells treated with DMSO only) as shown below:

RESULTS AND DISCUSSION: Compound C35 was identified to have a molecular weight 270.1 by using Gas Chromatography-Mass Spectrometry chromatographic library with the name hexadecanoic acid, a fatty acid that can be found in plant and animal sample Fig. 1. From the Lipinski’s rule of five, one of the criteria of an orally active drug, it should have a molecular weight of less than 5004. However, Quinn et al., (2008) stated that one of the characteristics to become a lead-like molecule is the compound should have a molecular weight of less than 4505. This compound fulfils both the Lipinski’s and Quinn’s rule with a molecular weight of only 270.1 which is within the range suggested. Therefore, it might be acknowledged as a potential lead-like active drug. The IC50 exceeding 100 µg/mL Fig. 2 shown in the treatment on HepG2 lead to a further test of the compound in a luciferase assay.

The HepG2 transfected with SR-B1 gene was used as an in-vitro model system to study the induction level of transcriptional activities of the SR-B1 promoter when treated with the compound. The SR-B1 gene plays a pivotal role in reverse cholesterol transport which it would selectively uptake the cholesteryl ester from HDL into the liver for secretion in the bile acid. A sample is said to have a potential towards the anti-atherosclerotic activity when it can act as a ligand to regulate the transcription of the mentioned promoter. Whereas higher expression of the luciferase activities indicates that there is high promoter activation induced by the sample. Based on the luciferase assay performed, generally, compound C35 was able to induce the expression of transcriptional regulation of SR-B1 promoter in a dose-dependent manner at its respective effective concentrations Fig. 3. The highest expression was at concentration 12.5 µg/mL with 2.08-fold higher from the non-treated cell. After it reached the most effective concentration, the transcriptional regulation of SR-B1 promoter was subsequently reduced. 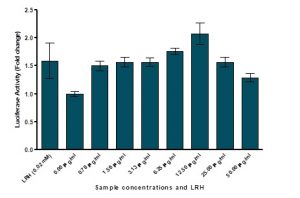 All luciferase activities of the SR-B1 promoter at the effective concentration for compound C35 were comparable with the positive control used in this assay which is LRH-1. LRH-1 has been identified as orphan nuclear receptors that control the SR-B1 expression, and it was used as the positive control since that it has previously found to induce the SR-B1 promoter activity by binding to the LRH-1 response element in the promoter regions 6. The luciferase activity for LRH-1 was lower than effective concentration where it only reached 1.5-fold higher as compared to control. SR-B1 is a promoter that only PPAR-γ can exclusively bindin.

Glass and Witztum (2001) found that PPAR-γ was a strong inducer using SR-B1 transcription compared to other PPARs 7. This compound was an efficient candidate as PPAR-γ ligand since it can bind efficiently to the ligand-binding domain of the activated receptors. Indeed, Itoh et al., (2008) proposed that activation of PPAR-γ by ligands depends on the ability of the ligand to establish a covalent bond and additional weak interactions in the ligand binding domain of PPAR-γ which rationalize the binding mode in PPAR-γ 8.

Fig. 3 showed a rather bell-shaped curve which is similar to the previous study on luciferase activities using a different partition of Momordica charantia extracts (hexane, ethyl acetate, butanol, and water) by Haley et al., (2003) 9. Their results showed a dose-dependent transcriptional activity with a bell-shaped curve pattern. The pattern in both past and present study might strongly suggest that there were cell stress mechanisms that form an obligate part of receptors which induce the action which was using the γ-globin gene as the receptor.

Hexadecanoic acid, on the other hand, is one of the ligands that can bind to PPAR as most of the PPAR ligand is a fatty acid. PPAR ligand can be either natural (exogenous) or synthetic (endogenous). Example of synthetic PPAR ligand is clofibrate, gemfibrozil, fenofibrate and fenoprofen 10.

CONCLUSION: The present study reveals hexadecanoic acid has the potential for the anti-atherosclerotic drug candidate based on the results where it is non-toxic towards HepG2 and the ability to increase the expression of transcriptional regulation of SR-B1 promoter. Further investigation on the gene expression as well as in-vivo study should be considered to verify the ability of this compound.

ACKNOWLEDGEMENT: This study was supported by the grant from the Ministry of Science, Technology and Innovation Malaysia.