This study involves synthesis of 3- [4- aryl substituted- 3 - yl] - thiazolidin- 4 – one - 5- acetic acid by microwave oven induced synthesis method. Synthesized compounds were screened for anti-microbial activity by MIC and zone inhibition tests against various gram positive organism and gram negative organisms respectively. The microbiological assay is based upon a comparison of the inhibition of growth of micro-organism by measured concentration of the antibiotics to be examined with that produced by known concentration of a standard preparation of the antibiotic having a known activity.

INTRODUCTION 1, 2, 4, 8: In    the   last   few   years,   microwave-induced     organic   reaction enhancement   (MORE) chemistry    has    gained   popularity as a  non-conventional   technique  for rapid  synthesis  and  many researchers  have described accelerated  organic   reactions,  with  a  large  number of papers proving the synthetic utility of MORE chemistry in routine organic synthesis .The present study is related to the area of chemical synthesis. Thiazolidines are a perspective class of heterocycles for pharmacological research. Interest in these substances is caused by a variety of its biological activity. In the present study an attempt has been made to synthesize thiazolidinediones derivatives and to evaluate their antimicrobial activity.

MATERIAL AND METHODS 5, 6, 7: All the microorganisms were obtained from the laboratory stocks, of the Department of Pharmaceutical Biotechnology, KMCH College of Pharmacy, and Coimbatore. (Table-1)

Preparation of Nutrient Broth for Bacteria: The accurately weighed quantity of above ingredients were transferred to a conical flask, and dissolved in distilled water with the aid of heat with stirring and the pH was adjusted to 7.2 – 7.4 and plugged with non-absorbent cotton, covered by Aluminium foil and sterilized by autoclaving (121˚C at 15 lbs pressure for 15 min).

Preparation and standardization of inoculum

Each bacterial pure culture from the slant culture is picked up aseptically and was transferred into 100ml of nutrient broth. The inoculated broths were incubated at 37˚C for 24 hrs and growth was arrested by stored in the refrigerator (below 4˚C).After incubation inoculum were standardized to 106-108 CFU/ml. for bacteria.

Sample Preparation: 25 mg of each sample were dissolved in 2.5ml DMSO (Dimethyl Sulfoxide) to a final concentration of 1000μg/ml. The solvent control shows no antibacterial activity with all the test organisms used. The sterile disc (6 mm in diameter) were impregnated with 10μl of the sample and tested against microbial cultures.

Antibacterial activity 2, 4: Muller Hinton agar medium was prepared and transferred into sterile petri plates aseptically (thickness of 5-6mm).  The plates were allowed to dry at room temp.  The plates were inverted to prevent condensate falling on the agar surface. The layers of the medium are uniform in thickness, is done by placing the plates on a leveled surface. Standardized bacterial inoculum was applied to the plates and spreaded uniformly over the surface of medium by using a sterile Non-absorbent cotton swab and finally the swab was passed around the edge of the medium. The inoculated plates were closed with the lid and allowed to dry at room temperature. The sample impregnated discs were placed on the inoculated agar medium. All petriplates were incubated at 37˚C for 24 hrs.  After the incubation diameter of zone of inhibition produced by the sample were measured and the details are tabulated in Table 2 and Fig. 1- 6. 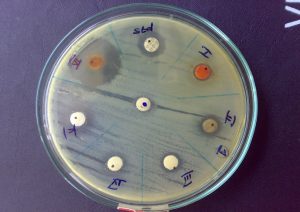 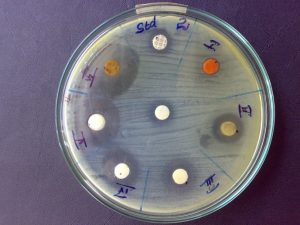 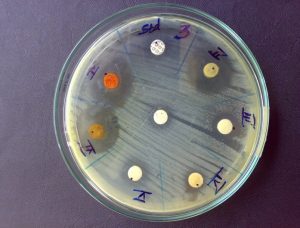 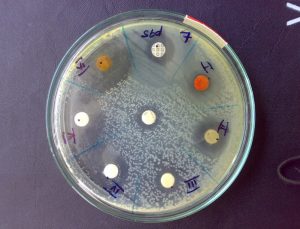 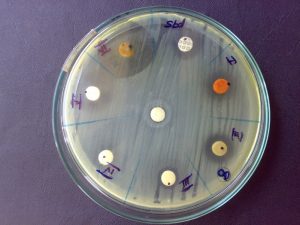 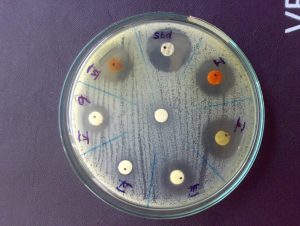 Determination of Minimum Inhibitory Concentration for Synthesized Compounds (MIC) by Tube Assay Method: The serial dilution of known concentration of compound solution are made from the stock (250 mg/ml) by using Muller Hinton broth using the method described below The tubes were labeled 1 to 8 and 1 ml of Muller Hinton broth were added to the first 5 tubes and 8th tube, then added 0.5 ml Muller Hinton broth to 6th and 7th tubes. One ml of different synthesized compounds was added to the 1st tube, mixed and transfer 1ml serially up to tube 5.From the 5th tube transfer 1ml to 6th tube. Mixed and transfer 0.5 ml to the 7th tube. Each tube, 1 to 7 contains 1ml diluted extract. The 8th tube is the control. With a standardized micro pipette, add a drop of the diluted broth culture approximately 0.01ml of the test organism to all tubes, including the control, gently mixed and incubated at 37 0 c for 16 to 18hrs.The highest dilution of particular compounds showing no turbidity was observed and recorded. This was taken as the end point, and this dilution was considered to contain the concentration of drug equivalent to MIC (Table 3-9).

RESULTS AND DISCUSSION: Based on the literature review an attempt was made to synthesize some thiazolidin-4-one compounds by microwave oven. The antibacterial screening of the synthesized compounds were performed in the concentration of 1000µg/ml in dimethyl formamide against against gram positive organisms such as Bacillus lintus, Bacillus cerus, Micrococcus luteus and Staphylococcus albus and gram negative organisms such as Escherichia coli, Klebsiella aerogenosa, Proteus vulgaris and Salmonella paratyphi respectively by using disc plate method in Muller Hinton agar medium and the anti bacterial activity was evaluated.

CONCLUSION: In this study new thiazolidinone derivatives have been synthesized and purified. The synthesized compounds have been subjected to anti-microbial activity. Result shows that compound I, V, and VI shows greater activity against respective organism and other compounds II, III, and IV shows moderate action. Hence the continuation of this work can be done by same parameters using microwave oven. Furthermore biological activities such as anti-inflammatory, antidiabetic, analgesic, antiepileptic activities etc. can be done for the synthesized compounds in future.