ANTI-BACTERIAL EFFICACY OF OCTENIDINE AS A MOUTH WASH

ANTI-BACTERIAL EFFICACY OF OCTENIDINE AS A MOUTH WASH

INTRODUCTION: During the past few years, there has been a dramatic increase in the use of mouthwashes. These are perceived by users to maintain oral health and have a fresh “dental” taste.1 Some health care professionals recommend their use as an adjunct to conventional mechanical removal of plaque and this advice has been supported by studies which have shown that tooth brushing is only poorly carried out. 2, 3

The mouth and oropharynx are colonized with microorganisms, which include gram-negative anaerobic bacteria, Staphylococcus aureus, and Enterococcus species.

The most common oral infections associated with bacteria are diseases of the tooth-supporting structures. Facultative microorganisms such as Enterococcus faecalis and Staphylococcus aureus are considered by many to be the most resistant species in the oral cavity. In addition, these microorganisms have the ability to invade the bloodstream, resulting in transient bacteremia, especially during tooth brushing and flossing (20%–68% of cases) and even during the chewing of food (7%–51% of cases). 4

Enterococcus faecalis, have been found to be associated with chronic periodontitis5 and failed root canal treatments involving chronic apical periodontitis. 6 An irrigant should ideally exhibit powerful antimicrobial activity, disinfect the oral cavity, flush out debris from oral cavity, provide lubrication, and have no cytotoxic effects on the periradicular tissues, among other properties. The prevalence rate of Staphylococcus species was found to be 73% in dental plaque and 84% in saliva.7 In accordance with the existence of oral staphylococci, Etienne et al. (1986) reported cases of staphylococcal IE resulting from dental extraction.8

Octenidine hydrochloride (OCT) Octenidine (Schulke & Mayr GmbH, Norderstedt, Germany), is a bispyridine derivative, i.e., N,N-[1,10-decanediyldi-1(4H)-pyridinyl – 4 pylidene] bis (1-octanamine) dihydrochloride a new bipyridine antimicrobial compound, has been developed as a potential antimicrobial/antiplaque agent for use in mouthwash formulations.9 The existing data suggest that a mouthrinse containing 0.1% OCT may be capable of exerting beneficial clinical effects upon plaque accumulation and gingivitis. OCT used in the form of mouthrinse was reported to inhibit dental plaque and caries both in rats and humans. It has been demonstrated that OCT appears to be more effective than chlorhexidine as a means for prolonged bacterial anti-adhesive activity.10

The aim of the study was to compare and evaluate the as antibacterial action of octenidine hydrochloride and chlorhexidine gluconate as a mouthwash.

Reference bacterial strains of Enterococcus faecalis (ATCC: 29212) and Staphylococcus aureus (ATCC: 25923) was obtained from IMTECH, Chandigarh. E. faecalis was plated on BHI (Brain Heart Infusion) broth supplemented with 1.5% (wt/vol) agar (Himedia laboratories, Mumbai, India) and incubated anaerobically at 37°C for 24 hours. A single colony of E. faecalis from a BHI agar plate was collected and suspended in sterile BHI broth at 37°C. Microbial cells were diluted with distilled water to reach the concentration of 1.6 × 108 CFU/ml (adjusted to Mc Farland 0.5).

1 ml of each organism suspension was contacted with 1 ml of mouthwash and subsequently, one hundred microliters of each mixture was removed in 3min (t3), 5min (t5) & 10min (t10) time interval. Each contact period sample is taken and plated on Brain Heart lnfusion agar to determine the number of colony forming unit (CFU) per plate. After 72 hrs of incubation at 37°C colony counts were measured using a microscope. The mean number of CFUs in the 3 areas of bacterial growth on each plate was determined and the number of CFU/mL was calculated for each contact period and analysed stastically.

RESULTS: The medians of CFU ml-1 of E.faecalis and Staphylococcus aureus after the application of the tested mouth rinse solutions at different contact times i.e. t3, t5 and t10 are given in Fig. 1 and 2. 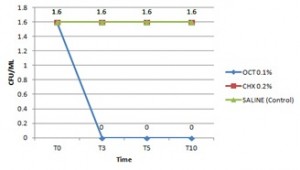 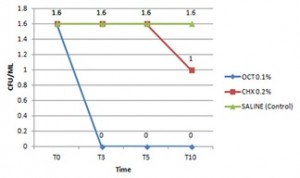 The number of CFUs dropped to zero after 3 minutes and remained zero after 5 minutes and 10 minutes contact time with OCT 0.1% mouthwash. The CFUs showed significant growth of bacteria with CHX 0.2% mouthwash after 3minutes and 5 minutes of contact period, reduced slightly after 10 minutes with Staphylococcus aureus as tested organism whereas 0.2% CHX showed bacterial growth at all time intervals (Fig.1 and 2). Control i.e. physiologic saline showed bacterial growth in 3 minutes, 5 minutes and 10 minutes. A Kruskal Wallis test was conducted to evaluate differences among the mouthwashes on mean number of CFU. The test was highly significant (P = 0.000). Post hoc tests were conducted to evaluate pair wise differences among groups using Mann Whitney U test. The results of these tests indicated a significant difference between CHX 0.2% and OCT 0.1% group.

DISCUSSION: In this study, antibacterial effect of OCT on E. faecalis was evaluated and compared with that of CHX. In the present study, all the tested solutions significantly reduced the microorganisms in oral cavity in a period of 3 minutes whereas 0.2% CHX didn’t showed any reduction. CHX is a broad spec­trum antimicrobial agent 11, that can be used effectively as mouthwash, an irrigant 12-17, disinfect the dentinal tubules 18-20, and be absorbed into the dentin. Several researchers have pointed out the potential advantages of CHX as an antimicrobial medicament in endodontic therapy.12-20

Only a few in-vivo studies have investigated the antimicrobial efficacy of CHX as an irrigant. Leonardo et al.21 reported that 9 of 22 canals (40.9%) showed negative cultures after chemomechanical preparation using 2% CHX. Ercan et al.22 concluded that both 2% CHX and 5.25% NaOCl were significantly effective in reducing the bacterial population in infected root canals.

Gjermo et al. 23 reported that rinsing twice a day with 10 ml of a 0.2% CHX inhibited the dental plaque formation. Furthermore, its antigingivitis efficacy was also well documented. 24-26 Unfortunately, these positive effects are accompanied by side effects, the most disturbing being extrinsic tooth staining.27, 28 In few cases, the occurrence of gingival desquamation and painful mucosa were reported.26, 28 Flotra et al.28 have implicated chlorhexidine in altered taste sensation, superficial desquamation of the oral mucosa, brownish discoloration of the tongue and teeth, and increased calculus formation. 29 Chlorhexidine has also been associated with potential anaphylactic reactions. 30-32 Studies with radiolabeled chlorhexidine mouthrinse have shown its ability to penetrate the intact mucosal barrier of the oral cavity or intestinal tract.33, 34 Ohtoshi et al. 35 reported more than 30 cases of anaphylactic shock after the topical application of chlorhexidine.

OCT is a mouth rinse capable of exerting beneficial clinical effects upon plaque accumulation and gingivitis development. Octenidine is an excellent antimicrobial mouth-rinse having properties to support this inference. Although OCT has significant antibacterial activity, additional studies will be needed to investigate OCT’s relative safety, biocompability and absence of unfavourable cosmetic and organoleptic properties. Octenidine dihydrochloride is a cationic antimicrobial substance, which as a result of the two positive charges in relation to the molecular weight of 437 daltons is strongly adsorbed onto negative cell surfaces. It reacts with polysaccharides in the cell wall of microorganisms, attacks the enzymatic systems there, destroys cell function and leads to leakage of the cytoplasmic membrane.

As a result, the mitochondrial function is also disturbed. Furthermore, interaction with salts of the fatty acid glycerol phosphate in bacterial cell membranes serving as main binding partners is discussed. Some findings indicate strong adherence to lipid components in cell membranes (e.g. cardiolipin), which might explain the high antimicrobial activity together with good tolerability for human epithelium and wound tissue. Octenidine dihydrochloride shows a broad antimicrobial activity against Gram-positive and Gram-negative bacteria, chlamydiae and fungi. Microbiostatic and microbicidal efficacy ranges about 10 times higher than that of chlorhexidine.36 Beiswanger et al. 37 (1990) conducted a three-month clinical trial of 0.1 % Octenidine mouthrinse in which 450 adults participated, using their normal oral hygiene practices. Octenidine reduced plaque by one-third and gingivitis by one-half compared with the placebo. One of the recent studies showed that a 0.1% octenidine mouth rinse provided statistically significant reductions of 39% less plaque, 50% less gingivitis, and 60% fewer gingival bleeding sites.

Dogan et al 38 compared the short-term relative antibacterial effects of OCT and CHX. Their results were similar with our study, OCT was found favorably more effective than CHX in its antibacterial activity, both in vitro and in vivo.

CONCLUSIONS: Two different mouth rinse solutions i.e. OCT 0.1% and CHX 0.2% were compared with PS and with each other for their antibacterial effects. From the tested rinsing solutions, OCT 0.1% was found to be the most effective in substantially reducing total bacterial counts after 3, 5 and 10 min time interval.