ABSTRACT: To study the anti-oxidant and anti-diabetic activities of isolated compound beta-sitosterol from the ethanolic extract of stem of Andrographis echioides under the in-vitro model. The isolation was done using column chromatography using gradient elution with different mobile phases. Structural elucidation was carried out on the basis of spectral analysis. Anti-oxidant activity was determined by 2,2-diphenyl-1-picrylhydrazyl scavenging assay. The anti-diabetic activity was evaluated by the inhibitory potential of isolated compound beta-sitosterol against alpha-amylase and alpha-glucosidase assays. The study revealed that the beta-sitosterol exhibited significant α-amylase (58.57±0.29) and α-glucosidase (43.85±0.032) inhibitory activities respectively and well compared with standard acarbose drug. The beta-sitosterol showed the best scavenging activity (74.46±0.036) against the tested radicals like 1,1-diphenyl-2-picrylhydrazyl, The infra-red spectrum specific absorption bands for beta-sitosterol viz:  3427.78 cm‐1 (O‐H stretching.); 2937.40 cm‐1 (aliphatic C‐Hstretching); 1640.58 cm‐1 (C=C absorption peak); other absorption peaks includes 1464.31cm‐1 (CH2); 1381.56 cm‐1 (OH def), 1054.11 cm‐1 (cycloalkane) and 800.97 cm‐1. Structural elucidation of beta-sitosterol was done by spectrum analysis such as 13C and 1H depth nuclear magnetic resources. Therefore, it is concluded that beta-sitosterol is a potential source for natural anti-oxidant and anti-diabetic compounds and could have potential use in the management of diabetes mellitus.

The enzymes alpha-glucosidase are responsible for the breakdown of oligo- and disaccharides to monosaccharides. α -amylase and α- glucosidase inhibitors is useful for lowering the process of glucose absorption and decreases glucose level in blood 5, 6. Diabetes mellitus patients suffer from a high blood sugar level, unusual thirst, frequent urination, extreme hunger, loss of weight, blurred vision, nausea and vomiting, extreme weakness and irritability, tiredness and mood change 7. Inhibitors of amylase and α glucosidase are responsible for the high amount of glucose in the blood 8. Now day’s herbal medicines are more effective than synthetic medicines. There is no side effect while using herbal medicine 9, 10.

Andrographis echioides belong to the Acanthaceae family, and its Tamil name is Gopuramthangi 11, 12. It is an ayurvedic herb plant used in the treatment of many ailments such as anti-inflammatory, anti-arthritic, antimicrobial, anti-ulcer, anti-oxidant activity, hair problems, etc., 13-14.

Therefore, in the present study, the anti-oxidant and anti-diabetic activities of beta-sitosterol isolated from the ethanolic extract of stem of Andrographis echioides were evaluated employing in-vitro assay methods.

Collection of Plant Material: The stem of Andrographis echioides was collected from Manarkkudi, Mayiladurai, Nagapattinam district, Tamil Nadu, India, in December 2019. It was authenticated by Dr. N. Ravichandran, Research associate, Centre for advanced research in Indian system of Medicine, (CARISM) and SRC; SASTRA Deemed to be University, Tirumalaisamuthiram, Thanjavur (Voucher no. SRC SASTRA 0005).

Preparation of Ethanol extracts: The stems of Andrographis echioides were washed in running water, cut into small pieces and then shade dried for a week at 35-40 ºC, after which it was grinded to a uniform powder of 40 mesh size. The ethanol extracts were prepared by soaking 1.5 kg of the dried powder plant materials in 1 L of ethanol by continuously using a soxhlet extractor for 10 hr. The extracts were filtered through Whatman filter paper No. 42 (125mm). The filtered extract was concentrated and dried by using a rotary evaporator under reduced pressure. The final dried samples (998 g) were stored in labeled sterile bottles and kept at -20 ºC. The filtrate obtained was used as a sample solution for further isolation 20.

Isolation of Beta-sterol by Column Chromatography: The condensed methanol extract of the stem (500 g) of the sample was subjected to column chromatography over TLC grade silica gel. Elution of the column first with n-hexane, an increasing amount of ethyl acetate in n-hexane and finally with methanol yielded a number of fractions. The preparation of solvent systems used to obtain beta-sitosterol (234 mg/500 g) was ethyl acetate-methanol (60:40) from fraction 7. The compounds were detected on TLC plates by spraying with Libermann Burchard reagent and heated at 100 °C for 10 min 21.

Structural Elucidation Study of Isolated Compound: Different spectroscopic methods including U.V., FTIR, 1H NMR, 13C NMR were used to elucidate the structure of isolated compounds. The U.V.–visible spectrum of the isolated compounds in methanol was recorded using a Shimadzu 160A U.V.–visible spectro-photometer. The Fourier Transform Infrared (FTIR) spectra were recorded with a nominal resolution of 4 cm-1 and a wavenumber range from 400 to 4000 cm-1 using the KBr pellet technique.

Anti-oxidant Activity (DPPH Free Radical Scavenging Activity) Determination: The anti-oxidant activity of the isolated compound beta-sitosterol was examined on the basis of the scavenging effect 26. Ethanolic solution of DPPH (0.05 mM) (300 μl) was added to 40 μl of isolated compound with different concentrations (20 – 100 μg/ml). The freshly prepared DPPH solution was kept in the dark at 4 °C. 96% (2.7 ml) of ethanol was added and shaken vigorously. The mixture was kept constant for 5 min, and absorbance was measured at 517 nm spectrophotometrically. Ethanol was used to set the absorbance at zero. A blank sample was also prepared, which contains the same amount of ethanol and DPPH. All the determinations were performed in triplicate. The radical scavenging activities of the tested samples expressed are calculated as a percentage of inhibition according to the equation,

Where A and B are the absorbance value for the test and blank sample, respectively.

In-vitro Antidiabetic Activity of Beta-sitosterol from the Stem of Andrographis echnoides:

Alpha-Amylase Inhibitory Assay: The alpha-amylase inhibitory assay was carried out by using the isolated compounds beta-sitosterol from the stem of Andrographis echioides. A total of 250 μL of beta-sitosterol compound (20-100 μg/ml) was placed in a tube and 250 μL of 0.02M sodium phosphate buffer (pH 6.9) containing α-amylase solution (0.5 mg/mL) was added. This solution was pre-incubated at 25 ºC for 10 min, after which 250 μL of 1% starch solution in 0.02M sodium phosphate buffer (pH 6.9) was added at regular time intervals and then further incubated at for 25 ºC for 10 min. The reaction gets terminated by the addition of 500 μL of dinitrosalicylic acid (DNS) reagent. The tubes were then incubated in boiling water for 5 min and cooled at room temperature. The reaction mixture was diluted by adding 5 mL distilled water, and the absorbance was measured at 540 nm using a spectrophotometer. A control was prepared during the same procedure by the replacement of the extract with distilled water. The α-amylase inhibitory activity was calculated in terms of percentage inhibition 27.

Alpha-glucosidase Inhibitory Assay: The activity of isolated compound beta-sitosterol on α-glucosidase was determined by using α-glucosidase from Saccharomyces cerevisiae. P-nitro phenyl glucopyranoside (p-NPG) was prepared in 20mM phosphate buffer as a substrate solution and pH 6.9. 100 μL of α- glucosidase (1.0 U/mL) was pre-incubated with 50 μL of the different concentrations (20-100 μg/ml) of the isolated compound for 10 min. Then 50 μL of 3.0 mM (pNPG) substrate was dissolved in 20 mM phosphate buffer (pH 6.9) were added to start the reaction. The reaction mixture was incubated at 37 ºC for 20min and stopped by adding 2 mL of 0.1 M sodium carbonate. The α-glucosidase activity was determined by measuring the yellow-colored p-nitrophenol released from pNPG at 405 nm. The results were expressed in the percentage of the blank control. The α-glucosidase inhibitory activity was calculated by percentage inhibition 28.

Statistical Analysis: All assays were conducted in triplicate. Statistical analyses were performed with SPSS 16.0 for an analysis of variance (ANOVA) followed by Duncan's test. Differences at P < 0.05 were considered to be significant. 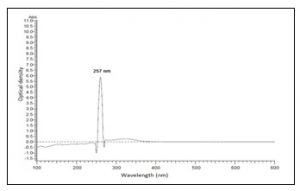 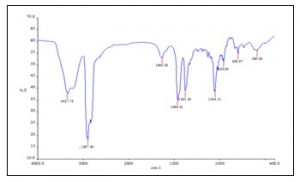 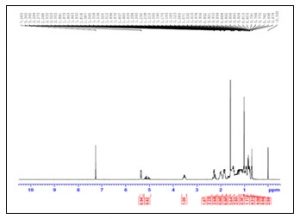 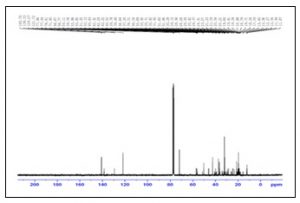 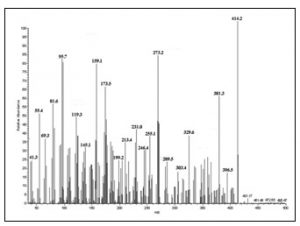 The molecular weight and fragmentation pattern indicate that the compounds were presenting beta-sitosterol, respectively Fig. 5.

Purification of Isolated Compound by HPTLC and HPLC: HPTLC fingerprint patterns have been therefore evolved to check the purity of isolated compound from methanolic extract of the sample. 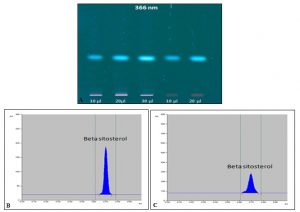 The Retention time of beta-sitosterol isolated from the ethanolic extracts of stem of Andro-graphisechioides. was about 8.274 was shown by HPLC peak Fig. 7. 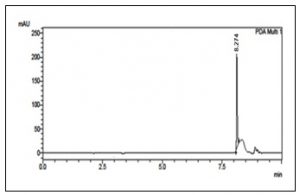 FIG. 7: HPLC SPECTRA OF PURITY OF THE ISOLATED COMPOUND BETA-SITOSTEROL

Previous studies suggested that the beta-sitosterol, are the main bioactive compound, has been reported to possess anti-inflammatory, anti-oxidant, anticancer, hepatoprotective, and hypoglycaemic activities 29. On subjection to I.R. spectroscopic analysis, absorptions bands appeared at 3426 cm-1 that is characteristic of O‐H stretching, 2868 cm-1 is due to aliphatics or C‐H stretching or (CH3), 1540 cm-1 due to double (C=C) stretching, 1054 cm-1 due to (C-O).

The 1H NMR spectrum (300MHz, CDCl3) of compound Fig. 7 has revealed a one proton multiplet at δ 2.26, the position and multiplicity of which was indicative of 3H of the steroid nucleus.

The typical 6H of the steroidal skeleton was evident as a multiplet at δ 5.36 that integrated for one proton. The spectrum further revealed signals at δ 1.49 and δ 1.19 (3H each) assignable to two tertiary methyl groups at C- 18 and C-19, respectively.

The 1 HNMR spectrum showed two doublets centered at δ 0.90 (J = 6.7Hz) and δ 0.91 (J = 6.7Hz), which could be attributed to two methyl groups at C-26 and C -27 respectively. The doublet at δ 1.65 (J = 6.5Hz) was demonstrative of a methyl group at C-21. On the other hand, the triplet of three proton intensities at δ 0.86 could be assigned to the primary methyl group at C- 29. This compound is having six methyl, eleven methylene, and three quaternary carbons with a hydroxyl group.

The value at 24.31 ppm corresponds to the angular carbon atom (C19). Spectra show twenty-nine carbon signals, including six methyls, nine methylenes, eleven methane, and three quaternary carbons. The alkene carbons appeared at 140.76 and 129.27 ppm. In comparison, the standard data matched with the simulated data, which supports the proposed structure of this compound as β – Sitosterol 32-35.

The previous studies concluded that the free radical scavenging activity was showed by β-sitosterol, which implies its concentration-dependent antioxidant activity.

Each value was obtained by calculating the average of four experiments, and data are presented as mean ± SEM 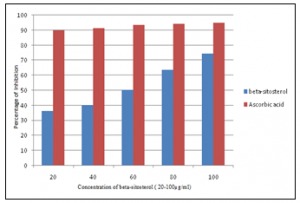 In-vitro Alpha-Amylase Inhibitory Assay:  In this study, in-vitro alpha-amylase inhibitory activities of the beta-sitosterol isolated from ethanolic extract of Andrographis echioides stem was examined. The isolated compound 48.57 0.365 to 58.57 0.29 showed inhibitory activity at a concentration of 100 μg/ml Table 2. 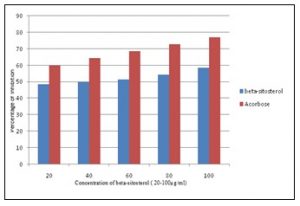 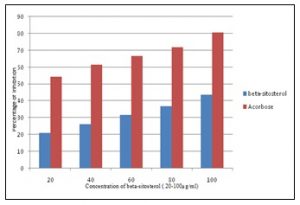 The percentage inhibition various from 21.05 0.0455 to 43.85 0.032 for the high concentration to the lowest concentration. A comparison of 𝛂 glucosidase activity between the standard and isolated compound beta-sitosterol showed in Fig. 10. A previous study suggested that anti-oxidant activity of the plant extract occurs due to the presence of phenolic compounds and their redox properties, hydrogen donor capacity, and singlet oxygen quenching 38-41.

ACKNOWLEDGEMENT: The author extends their thanks to the management, Principal of J.J. College of arts and science, (Autonomous) Pudukkottai, Tamil Nadu, India, for providing the facilities to do the preliminary research work in the Department of Biotechnology. Dr. G. Manigandan acknowledges Dr. K. Manjula, Managing Director, Bio Techno Solutions Training and Research Institute, Tiruchirapalli, for providing me the infrastructure to carry out the proposed research work. Dr. G. Manigandan acknowledges Dr. N. Ravichandran, Research associate, Centre for advanced research in Indian system of Medicine (CARISM), for identifying and authenticating the plants.

AUTHOR CONTRIBUTION: All authors contributed equally to this manuscript.

CONFLICTS OF INTEREST: The authors declare that they have no conflict of interest. It has not been published elsewhere. That it has not been simultaneously submitted for publication elsewhere. All authors agree to the submission to the Journal.