The different extracts of the roots of Bruguiera gymnorhiza (Family- Rhizophoraceae) were tested for anti-diabetic activity, by glucose tolerance test in normal rats and alloxan induced diabetic rats. Aqueous ethanol and butanol extracts had shown significant protection and lowered the blood glucose levels to normal in glucose tolerance test. In alloxan induced diabetic rats the maximum reduction in blood glucose was observed after 3h at a dose level of 250 mg/kg of body weight. The percentage protections by aqueous ethanol and butanol extracts were 30 and 48% respectively. In long term treatment of alloxan induced diabetic rats, the degree of protection was determined by measuring blood glucose, triglycerides, cholesterol and urea levels on 0,3,5,7 and 10th day. Both the extracts showed a significant anti- diabetic activity comparable with that of glibenclamide. The histopathological studies during the long-term treatment have shown to ameliorate the biochemical damages caused by alloxan. These results indicate that the B. gymnorhiza root possess significant anti -diabetic activity.

INTRODUCTION: Diabetes mellitus is a major disease characterized by derangement in carbohydrate, fat and protein metabolism, affecting nearly 10% of the population. Diabetes mellitus is characterized by a progressive decline in insulin action.1 cells normally compensates insulin resistance by secreting more amount of insulin to maintain the glucose homeostasis. In non insulin dependent diabetes mellitus (NIDDM) this ß cell function gets impaired leading to deterioration in glucose homeostasis and subsequent development of impaired glucose tolerance and frank diabetes.2-3 Hyperglycemia in the diabetics is associated with alteration of glucose and lipid metabolism and modification in liver enzymes level.4 Liver is an important insulin dependent tissue which plays a pivotal role in glucose and lipid metabolism and is severely affected during diabeties.5 In diabetes the levels of hepatic enzymes increases. The level of ALT increases due to hepatocellular damage and is always accompanied by an increase in AST activity. Moreover the ALT and AST activity has been used as an indicator of liver function. 6

Approximately 10% of patients have type 1 diabetes mellitus (DM) and the remainder have type 2 Diabetes Mellitus.7 Insulin and oral hypoglycemics are the most widely used drugs for diabetes but they also have various side effects like hypoglycemia, weight gain (sulfonylurea), lactic acidosis with biguinides and all of these drugs may cause liver and renal damage.8 From the beginning of last century, evidence of lipid lowering properties of medicinal plants has accumulated.9

In recent years many traditionally used medicinal plants have been tested for their antidiabetic potential in experimental animals.10 Ethnobotanical information indicates that more than 800 plants are used as traditional remedies for the treatment of diabetes.11 Many Indian medicinal plants are reported to be useful in diabetes. However, search for new anti-diabetic drugs continue. The roots of B.gymnorhiza Linn. (Family- Rhizophoraceae) were used traditionally for the treatment of diabetes. The present study is aimed at evaluating the antidiabetic activity of aqueous ethanol and butanol extract of B. gymnorhiza roots in alloxan induced diabetic rats.

Preparation of extracts: The dried root powder (5 kg) was extracted with 80% aqueous ethyl alcohol by maceration process for 3 days. The concentrated aqueous ethanol extract (113 g) was suspended in water and fractionated with butyl alcohol (4x500 ml) and yielded of butanol extract, (16.57 g).

Test Animals: Male wistar albino rats (160- 200 g) were used in the experiment. Animals maintained under standard environmental conditions, were fed with a standard diet (Hindustan Lever, India) and water ad libitum. The animals were fasted for 16h before experimentation but allowed free access to water.

Effect of B.gymnorhiza root extracts on glucose tolerance in rats. Fasted rats were divided into 3 groups of six rats each. Group l served as a control, received distilled water. Group II – III received aqueous ethanol and butanol extracts respectively at a dose of 250 mg/kg body weight as a fine aqueous suspension orally. The rats of all groups were given glucose (2 g/kg body weight, p. o) 30min after administration of the drug. Blood samples were collected from the tail vein just prior to glucose administration and at 30 and 90 min after the glucose loading. Serum was separated and blood glucose levels were measured immediately by glucose-oxidase method.12

Effect of B.gymnorhiza root extracts on alloxan-induced diabetic rats: Male wistar rats (180-200g) were made diabetic by a single i.p injection of 120mg/kg body weight of alloxan monohydrate in sterile normal saline. The rats were maintained on 5 % glucose solution for next 24h to prevent hypoglycemia. Five days later blood samples were drawn from tail vein and glucose levels were determined to confirm the development of diabetes (350mg/dl). The diabetic rats were divided into four groups, each containing six animals. Controls rats (Group I) were given distilled water orally, while B. gymnorhiza aqueous ethanol, and butanol extracts were given to groups II-III respectively, at a dose of 250 mg/kg, orally. Group IV received glibenclamide at dose of 10 mg/kg. Blood samples were collected from the tail vein just prior to and 1h, 3h and 5h after drug administration. The effect of B.gymnorhiza extracts was also tested for a prolonged treatment. The diabetic male wistar rats (160-180g) were divided into four groups of eight rats each. Group I served as diabetic control received distilled water instead of extracts. The rats of group II-III received aqueous ethanol and butanol extracts respectively at dose of 250 mg/kg body weight, as fine aqueous suspension, orally. Group IV received glibenclamide at dose of 10 mg/kg. The administration of extracts was continued for 10 days, once daily. Blood samples were collected through the tail vein just prior to and on days 1,3,5,7 and 10 after drug administration. The blood glucose, urea, total cholesterol, triglyceride levels were determined for all the samples.13

Histopathological Studies: Animals were sacrificed on 5th and 10th day during prolonged treatment. Pancreas, liver and kidney were removed, washed with cold saline and preserved in 10% formalin in buffered form. Blocks from tissues were routinely processed and embedded in paraffin. Thin sections were cut using rotary microtome and stained with hematoxilin and eosin for histomorphology evaluation.

STATISTICAL ANALYSIS: The results are expressed as mean S.E.M. the significant of various treatments was calculated using students t-test and were considered statistically significant when P< 0.05.

RESULTS AND DISCUSSION: The extracts of B.gymnorhiza have shown significant (P<0.001) increase in glucose tolerance. The results are given in Table 1. The blood glucose levels were reduced considerably within 60 minutes of the drug administration. The butanol and aqueous ethanol extracts reduced the glucose levels to normal. Maximum effect was observed for butanol extract.

In alloxan-induced diabetic rats also, both extracts have shown considerable reduction in blood glucose levels. The results are shown in graph 1. 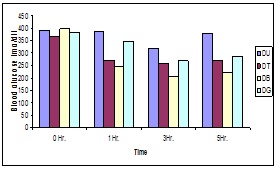 Treatment of the diabetic rats with glibenclamide (10 mg/kg) produced (29.77%) fall of blood glucose after 3h treatment. The prolonged treatment of B.gymnorhiza extracts on alloxan-induced diabetic rats produced consistent reduction in the blood glucose levels. Both the extracts have shown significant (p<0.001) reduction of blood glucose, urea, total cholesterol and triglycerides during the 10 days treatment period. However the butanol extract has shown maximum reduction (144.71 mg/dl on 10th day) and at a faster rate compared to aqueous ethanol extract (223.51 mg/dl).

CONCLUSION: Bruguiera gymnorhiza root juice is claimed to be useful in diabetes. Results of anti-diabetic activity of B.gymnorhiza root extracts established the scientific basis for the utility of this plant in the treatment of diabetes. The aqueous ethanol and butanol extracts have shown significant reduction in blood glucose levels in both glucose loaded and alloxan induced diabetic rats. Thus the claim made by the traditional Indian systems of medicine regarding the use of root juice of this plant in the treatment of diabetes stands confirms.