INTRODUCTION: Diabetes mellitus (DM) currently is a major health problem for the people of the world and is a chronic metabolic disorder/syndrome resulting from a variable interaction of hereditary and environmental factors and is characterized by abnormal insulin secretion or insulin receptor or post receptor events affecting metabolism involving carbohydrates, proteins and fats in addition to damaging liver, kidney and β cells of pancreas 1. The number of people suffering from the disease worldwide is increasing at an alarming rate with a projected 366 million peoples likely to be diabetic by the year 2030 as against 191 million estimated in 2000 2. From literature review it has been revealed that 15 - 20% of diabetic patients are suffering from insulin-dependent diabetes mellitus (IDDM) or type-I 3.

The IDDM is noted both in adult and child hood. It is characterized by elevation of both fasting and post-prandial blood sugar levels. Chronic hyperglycemia during diabetes causes glycation of body proteins that in turn leads to secondary complications affecting eyes, kidneys, nerves and arteries [4]. These may be delayed, lessened or prevented by maintaining blood glucose values close to normal in modern medicine; no satisfactory effective therapy is still available to cure the diabetes mellitus. Though insulin therapy is also used for the management of diabetes mellitus, but there are several drawbacks like insulin resistance 5, anorexia nervosa, brain atrophy and fatty liver after chronic treatment. Besides the use of insulin for the treatment of insulin dependent diabetes mellitus (IDDM), other approaches for the control of hyperglycemia include the use of amylin analogues which regulate gastric emptying and inhibitors of intestinal alpha glucosidases like acarbose, miglitol and voglibose which delay postprandial hyperglycemia. Sulphonylureas, the most widely used class of drugs act by closure of ATP dependent channel. Metformin, a biguanide oral antidiabetic limits intestinal glucose absorption. These drugs have certain effects like causing hypoglycemia at higher doses, liver problems, lactic acidosis and diarrhoea. It is apparent that due to the side effects of the currently used drugs, there is a need for a safe agent with minimal adverse effects, which can be taken for long durations. Though biguanides and sulfonylureas are valuable in treatment of diabetes mellitus, their use is restricted by their limited action, pharmacokinetic properties, secondary failure rates and accompanying side effects 6. Moreover, these therapies only partially compensate for metabolic derangements seen in diabetics and do not necessarily correct the fundamental biochemical lesion 7.

Recently, there has been increasing interest in the use of medicinal plants. The use of medicinal plants in modern medicine suffers from the fact that though hundreds of plants are used in the world to prevent or to cure diseases, scientific evidence in terms of modern medicine is lacking in most cases. However today it is necessary to provide scientific proof as whether to justify the use of plant or its active principles 8. The herb Psoralia corylifolia belongs to the Leguminoseae family and is commonly known as Babchi, Bavachi in Hindi. It has a long history of use in Ayurvedic medicine (the traditional medicine system of India). The species is distributed in Arabian countries, Pakistan, Bangladesh, India, Sri Lanka, Burma China, Somalia and Scootra. It is widely distributed in the plains of India from Uttar Pradesh to Tamil Nadu 9. Evidence suggests that Psoralia corylifolia have anti-tumour, immunomoudulatory, anti-filarial, anti-leucodermal, anti-microbial, analgesic, anti-pyretic and anti-inflammatory activity. Psoralia corylifolia has also shown some promising speed in treatment of psoriasis, scabies & is prescribed as local & oral application to skin 10-15. Psoralia corylifolia is widely used as an antidiabetic agent in India and prescribed for the patient having high blood glucose level without any scientific investivgation 16. So, in the present study, we investigated the hypoglycemic and antidiabetic effect of Psoralia corylifolia seeds extract on healthy and alloxan- induced diabetic rats.

Plant material: The seeds of Psoralia corylifolia were collected from a well reputed shop of local market of Lucknow and were authenticated by division of Taxonomy, National Botanical Research Institute (NBRI), Lucknow and a voucher specimen no. NBRI/CIF/Re./08/2008/32 was deposited in national herbarium of NBRI for future reference.

Chemicals used: All chemicals and drugs were obtained from central store of Faculty of Pharmacy, BBBNITM, Lucknow and were of analytical grade.

Extraction preparation: The seeds of Psoralia corylifolia were dried under shade and then pulverized into moderate fine powder in a mechanical grinder and then passed through a sieve no. 44. This powdered drug was extracted with methnol in a soxhlet apparatus. The extract was filtered and concentrated under vacuum using rota evaporator (buchi type) and stored in a dessicator for further use.

Animals: Healthy male albino Wister rats each weighing 150-200 g were used for study. The rats were housed in polypropylene cages in animal house of BBDNITM, Lucknow and maintained under standard conditions (12 h light and dark cycles, 25 ± 30C and 55-60 % relative humidity). The animals were fed with a standard diet and water ad libitum. The study was performed as per the guidelines of IAEC and CPCSEA and was approved by approval no. - BBDNITM/IAEC/01/2010.

Acute toxicity study: Increasing doses of various extract were given to different animals to determine change in parameters for acute toxicity and lethal dose LD50. Correspondingly dose used for pharmacological activity was decided for methanolic extract 20.

Induction of Diabetes Mellitus: Twenty four male Albino Wistar rats weighing 150-200 grams were used for the study of the effects of Psoralia corylifolia extracts on the blood glucose levels of the animals. The animals were fed on commercial feeds and were given water ad libitum. The animals were fasted from feeds for 12 hours before the commencement of each experiment, but were allowed water ad libitum. The rats were injected with alloxan tetra hydrate suspended in water at a dose of 120 mg/kg body weight intraperitonealy. They were kept for the next 24 hours on 5% glucose solution bottles in their cages to prevent hypoglycemia. After a period of three days the rats with a blood glucose levels greater than 150 mg/dl were considered diabetic and used for this research work 21.

Experimental Procedure for Oral Glucose Tolerance Test (OGTT) and antidiabetic activity: The animals for oral glucose tolerance test were randomly assigned into four groups of six rats in each group (n=6) each as follows, namely;

Oral glucose tolerance tests were performed on 16 hr fasted Wister rats using 1.75 gm glucose per kg body weight fed orally (dissolved in water for injection) through a canula fitted needle attached to syringe. Just after glucose fed single dose of plant sample (methanolic extract of seeds of Psoralia corylifolia) were also fed to study the effect of the same on GTT. The control group was fed equal amount of vehicle solution orally 21. In all the groups, blood was collected from the animal’s tail vein at 0, 30, 60, 90 minutes after glucose feeding. Simultaneously, blood glucose was measured by trinder’s glucose oxidase method using spectrophotometer. The animals for Alloxan-induced diabetic study were randomly assigned into four groups (I-IV) of six rats (n=6) each as follows, namely;

Statistical analysis: Blood glucose levels were expressed in mg/dl as mean ± SEM. The data were statistically analyzed using ANOVA with multiple comparisons versus disease control group. The values of P<0.05 and P<0.01 were considered as significant.

It was also observed that Psoralia corylifolia seeds methanolic extract when administered to alloxan induced diabetic rats, the weight loss was reversed and the animal returned to near normal when compared to disease control group. The ability of the methanolic extract of seeds to protect body weight loss seems to be due to its ability to reduce hyperglycemia. The possible mechanism by which seeds bring about a decrease in blood sugar level may be by potentiation of the insulin effect of plasma by increasing either the pancreatic secretion of insulin from β cells of the islets of Langerhans or its release from the bound form. A number of other plants have been reported to exert hypoglycemic activity through insulin release-stimulatory effect. 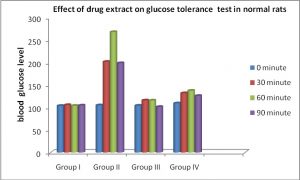 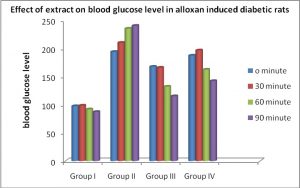 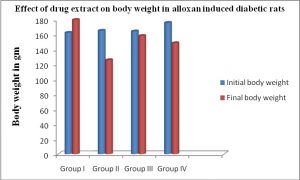 TABLE 3: EFFECT OF EXTRACT ON BODYWEIGHT OF ALLOXAN INDUCED DIABETES IN RATS

To our knowledge, this is the first study in which methanolic extract of seeds of Psoralia corylifolia was proved in vivo a potent hypoglycemic/anti-hyperglycemic agent and this information can be useful for the management of Type-I as well as Type-II diabetes mellitus. On the basis of this study further research works are needed to understand the exact mechanism of action of hypoglycemia produced by drug and to isolate the moieties responsible for the activity.