ABSTRACT: The bioactive peptides derived from food have increased consideration for their function in averting numerous chronic diseases, comprising, diabetes and obesity. Edible insects are the feasible composition of bioactive peptides owing to their high protein content and viable production. The present study was aimed to evaluate the antidiabetic and anti-obesity effects of seven edible insects’ protein hydrolysates after simulated gastrointestinal enzymatic digestion. Antidiabetic and anti-obesity efficiency was determined by the inhibition of digestive enzymes viz., dipeptidyl peptidase-IV, α-glucosidase, and α-lipase activity. Three active protein hydrolysate extracts (1.25, 2.5, and 5mg/dl) were selected and analyzed in terms of their IC50 values, and all tested extracts inhibited those enzyme activities in a dose-dependent manner. Based on the present study, we conclude the seven edible insects’ hydrolysate have potential enzyme inhibitory activities and thereby proved as an antidiabetic and anti-obesity activity.

INTRODUCTION: Diabetes Mellitus is well-known metabolic syndromes measured by high blood glucose and failings of insulin synthesis or insulin action, or both, which may cause serious complications, including retinopathy, nephropathy, neuropathy, obesity, and cardiovascular diseases 1-3. Diabetes and its hitches have established significant attention due to augmented health menaces, and its treatment costs 4, 5. The number of individuals suffering from diabetes and obesity has been tripled since 1990 and becomes the main challenge for our society globally 6, 7. Diabetes with overweight and obesity are the foremost risk factors for numerous chronic diseases, including cardiovascular diseases and various cancers 8-10.

About 10% of the total health care costs in numerous developed nations are attributed to using anti-hyperglycemic and lipid-lowering drugs 11, 12. The finding of safer anti-hyperglycemic and anti-obesity drugs is one of the essential parts of investigation globally 13, 14. A key target for the treatment of diabetes and obesity and related diseases usually performs the development of inhibitors of nutrient digestion and absorption 15-17.

Dietary bioactive peptides and proteins have augmented consideration for their function in averting chronic diseases such as diabetes and obesity. It has been recognized that the digestion of dietary polysaccharides occurs in the digestive tract by α-amylase and α-glucosidase that yields monosaccharides 3. These monosaccharides can be absorbed by the gut and transported into the blood circulation 18. At this juncture, the primary treatment tactics for the falling blood sugar is to deferral the glucose absorption by the inhibition of α-glucosidase. Inhibition of this enzyme plays a significant task in diabetic therapy.

Accordingly, the inhibitors of α-glucosidase namely, miglitol, acarbose, and voglibose and orlistat, have been extensively used to regulate blood glucose, and some of them cause unpleasant gastrointestinal adverse reactions 19, 20.

Dipeptidyl peptidase-IV (DPP-IV) is another enzyme that regulates and prevent diabetes mellitus. It is a serine protease (EC 3.4.14.5), highly expressed in epithelial and endothelial cells of various tissues including, liver, intestine, lung, kidney, and placenta 21. DPP-IV is breaking down X-proline or X-alanine at the N-terminal of polypeptides, transforming them into inactive form 21. Incretin is an intestinal hormone, stimulates insulin secretion in the pancreas, which aids carbohydrate digestion 22. These incretin hormones are two active types. Glucagon-like peptide-1 is a primary type usually synthesized by intestinal L-cells, which aids the following physiological functions: insulin secretion, reduces the release of glucagon, delays stomach emptying, diminishes appetite, and promotes diversity and regeneration of islet β-cells in the pancreas.

A glucose-dependent insulinotropic polypeptide is a second type, produced by the K-cells of the superiorgut region and is normally participated in glucose metabolism by enhancing insulin secretion. Both peptides have a short half-life, due to the deactivation by DPP-IV 23. Hence, the DPP-IV inhibitor is unique that prevents the inactivation of incretin hormones, and are realized as active strategies for the regulation and prevention of type 2 diabetes.

Human pancreatic lipase (EC: 3.1.1.3) is a primary enzyme that breakdown dietary fats into glycerol and free fatty acid in the digestive tract 28. Lipase is normally hydrolyzed above 70% of the ingested triglycerides 29. In this framework, inhibition of pancreatic lipase and the associated reduction of lipid absorption is an attractive approach for the discovery of potent agents to the treatment of obesity 30, 31. Various scientific evidence has been proven that dietary bioactive proteins normally trigger the physiological activities in the body that greatly influence protective actions against most of the diseases and their complications 5, 14, 32.

Despite their impact, traditional agents are less preferable due to their unwanted side-effects and cost-effectiveness 32. Presently, there is rising attention in the consumption of food proteins and peptides in the form of nutraceuticals or functional foods as choices to conventional therapies. These dietary proteins undergo many enzymatic hydrolyzes that yield functional peptides and possess various bioactivities including, antioxidant, antidiabetic, anti-obesity, antihypertensive, immunomodulatory, antimicrobial, anticancer and growth-regulating properties 32, 33.

Edible insects are feasible sources of bioactive peptides owing to their high protein content and sustainable development that has been showed various bioactivities 34, 35 including antioxidant and anti-inflammatory 33, antihypertensive 36, and antidiabetic 37. Zhang and his colleagues 37 identified two potent peptides Ser-Gln-Ser-Pro-Ala (IC50 20 μm) and Gln-Pro-Gly-Arg (IC50 65.8 μm). However, the findings are still in its primitive stage; and data have been achieved so far indicated that the edible insects can be a sustainable source of bioactive peptides for human well-being. Given the priority of insects as functional and nutritional food, the study was aimed to evaluate the antidiabetic and anti-obesity effects of seven edible insects’ protein hydrolysates after simulated gastrointestinal enzymatic digestion. 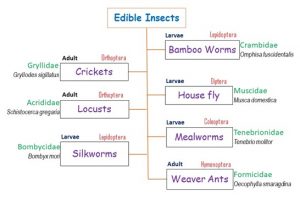 Preparation of Edible Insects and their Proteins: Seven species of insects were prepared fasted for about 24 h prior to removing residual food materials in their stomach. The individual insects’ species were divided into 3 groups according to the treatment viz. raw, boiling, and baking. The preparation of insects and their proteins have been intricately described in our previous publication 33.

DPP-IV Inhibition Assay: The DPP-IV-inhibitory activity was determined using a colorimetric method with Gly-Pro-p-nitroanilide (Gly-Pro-pNA) as a substrate. The DPP-IV inhibitory assay was performed as previously described 38 with some modifications. Briefly, the reaction system was composed of enzyme, substrate, and test samples in Tris-HCl buffer (0.1 M, pH 8.0). Test samples (125 µL) and substrate solution (0.8 mM, 125 µL) were mixed and incubated at 37 °C for 10 min. The reaction was initiated by adding the DPP-IV solution (5.00 mU/mL, 250 µL), and the solution was incubated at 37 °C for 60 min. The reaction was terminated by adding 3% acetic acid (0.5 mL), and the absorbance was measured using a UV-spectrophotometer at 380 nm. Samples were dissolved in buffer with final concentrations of 1.25, 2.50, and 5.00 mg/mL. BSA and IPP were used as negative and positive controls, respectively. DPP-IV inhibition (%) was calculated as follows:

α-glucosidase Inhibition Assay: For the determination of α-glucosidase inhibition, each insects’ protein hydrolysate (25μl) was added with an equal volume of α-glucosidase (0.5 U/ml) in the well of a 96-well microtiter plate and kept at room temperature for 10 min. Then added the substrate, p-nitrophenyl α-D-glucopyranoside (25μl, 0.5 mM) and kept for incubation at room temperature for 30 min. The reaction was then stopped by adding Na2CO3 (100μl, 0.2 M) and OD was determined at a wavelength of 405 nm using a spectrophotometer. The following formula was used to calculate α-glucosidase inhibition:

α-lipase Inhibition Assay: For the determination of pancreatic lipase inhibition, insects’ protein hydrolysate (25μl) was dissolved in dimethyl-sulfoxide (DMSO) and followed by adding with an equal volume of pancreatic lipase in the well of a 96-well microtiter plate and kept at room temperature for 10 min. The enzyme was prepared from porcine pancreas powder, which was suspended in Tris-HCl buffer (Tris–HCl (13 mM), NaCl (150 mM), CaCl2 (1.3 mM), pH 8.0) to give a concentration of 0.5 mg/mL. After a pre-incubation of pancreatic lipase with each insect hydrolysate for 10 min to initiate the enzyme reaction. The reaction rate was measured as optical density read at 360nm and 465 nm. Orlistat was used as positive control, and DMSO was used as a negative control.

DISCUSSION: The world populace is expected to be greater than 9 billion in 2050, ensuing greater need for food, which is half of the existing requirements. Traditional, protein sources would be inadequate and alternative sources are compulsorily required 39-41, in which edible insects may be superior in place 42. A large group of animal foods along with edible insects are very much popular as far as in the nationals of Africa, Asia, and Latin America. For instance, in Mexico, grasshoppers are a common countrywide dish composed of beef and beans43.

Rearing insects are more natural friendly when compared with livestock, because of the emission of lower greenhouse gases, lower water pollution and land use 44. Insects normally show maximum feed conversion efficiency (i.e. the amount of animal's efficiency in transforming the quantity of feed into body mass) in evaluation with livestock. Van Huis et al., 44 demonstrated that the feed conversion of house cricket (A. domestica) is to be 4 times superior to in pigs; 12 folds greater than in livestock and two folds greater than that of chickens. A motivating, optimistic feature of entomophagy is to aid in reducing pesticide usage. The gathering of edible insects is deliberated as pests, that can denote to decrease the usage of insecticides. Additionally, the economic welfares of accumulating studies on insects should also be taken into justification. In China and Mexico, the gathering of insects for human consumption resulted in a decrease in the quantities of pesticides used in crop production as well as reduced farmer’s economic burden 43, 45.

Globally, some insects are consumed as such in the raw form, directly after being trapped. However, the best technique for consuming insects is boiling by hot water or baking after starvation for 1–3 days 46. In addition, the succeeding culinary preparation may also include, cooking, frying or drying 44. Enzymatic hydrolysis is a recognized technique for improving the functional features of proteins by adapting their solubility, viscosity, and emulsifying and foaming properties, thereby enhancing their industrial utility. During enzymatic hydrolysis, proteins are breakdown into minor peptides and free amino acids, which possess various pharmacological activities. Generally, the most eatable insects include beetle, mealworms, caterpillar, bamboo worms, bee, wasp, ant, grasshopper, housefly, locust and cricket 33, 44.

These eatable insects may theoretically be consumed at various stages of their growth, namely, egg, larva, pupa, and adults 47. These insects generally contain functional proteins, which are known as bioactive peptides. These bioactive peptides have potentially proved as antioxidant, antidiabetic, antihypertensive, immunomodulatory and mineral binding properties 33, 48, 49.

Inhibition of α-Glucosidase is one of the most widely studied mechanisms for the treatment of diabetes. α-Glucosidase is a metabolic key enzyme in the gut during the post-prandial phase, which cleaves oligosaccharides into glucose. The inhibition of α-glucosidase may presently be used to decrease glucose uptake in the small intestine and successively reduce post-prandial hyper-glycemia in the condition of type 2 diabetes 54-56. In the present study, the protein hydrolysate of raw, boiled and backed of seven edible insects have significant α-glucosidase inhibitory activity. This study was correlated with a previous investigation, which was determined by the α-glucosidase inhibitory activity of protein hydrolysates from B. mori proteins 37, 57-60.

CONCLUSION: Based on the present study, we conclude the seven edible insects and their protein hydrolysates, which have potential enzyme inhibitory activities on α-glucosidase, dipeptidyl peptidase IV, and α-lipase and thereby proved as an antidiabetic and anti-obesity activity. For further consideration, more detailed research is required to characterize the protein hydrolysate, which has exact molecular mechanisms involved in the antidiabetic and anti-obesity properties.

ACKNOWLEDGEMENT: The authors sincerely acknowledge the faculty members and technical staff in the Research Department of Zoology, NKR Government Arts College for Women, Namakkal, Tamil Nadu who provided a great deal of support and cooperation in the study.

CONFLICTS OF INTEREST: The authors declare that there is no conflict of interest