ABSTRACT: Diabetes mellitus (DM) is a metabolic disorder in the endocrine system resulting from a defect in insulin secretion, insulin action or both of them. Adverse side effects of chemical drugs for the treatment of diabetes persuaded the use of medical plants. Macrotyloma uniflorum is a traditionally used plant for the treatment of diabetes is packed with powerful plant constituents with polyphenols, flavonoids, and proteins. They are one of the richest antioxidant sources, which lower blood sugar and bear other beneficial health effects. The purpose of this study is to evaluate the effect of ethanolic extract of Macrotyloma uniflorum leaves and stem (EMULS) on Alloxan-induced diabetic rats. In this study 36 Male Sprague Dawley rats, the body weight of 150-200 g was divided into 5 groups. Diabetes was induced by intraperitoneal injection of 150 mg/kg Alloxan. The Macrotyloma uniflorum treatment duration was 30 days in which two doses of extract (200 mg/kg & 400 mg/kg) were orally administered to diabetic rats. Blood glucose levels were estimated with glucometer before treatment, 2 h and 1-4 weeks after administration of extracts. Treatment with extracts of the Macrotyloma uniflorum resulted in a significant reduction in blood glucose. Extract of this plant is useful in controlling the blood glucose level. Macrotyloma uniflorum appears to aid in diabetes control and diminution of the complications of the disease.

INTRODUCTION: Diabetes mellitus (DM) is a metabolic disorder resulting from a defect in insulin secretion, insulin action, or both 1, 3. Insulin deficiency in turn, leads to chronic hyperglycemia with disturbances of carbohydrate, fat, and protein metabolism 1, 2.

Hyperglycemia is an important factor in the development and progression of the complications of diabetes mellitus. In diabetic rats, the utilization of impaired carbohydrates leads to accelerated lipolysis resulted in hyperlipidemia. Despite the presence of known Anti-diabetic medicines in the pharmaceutical market, diabetes and the related complications continued to be a major medical problem 4, 5. Recently, some medicinal plants have been reported in diabetes treatment worldwide and have been used empirically as Anti-diabetic remedies. Anti-hyperglycemic effects of these plants are attributed to their ability to restore the function of pancreatic tissues by causing an increase in insulin output or inhibit the intestinal absorption of glucose or to the facilitation of metabolites in insulin-dependent processes 4.

There is much evidence to indicate that reactive oxygen species are involved in the pathogenesis of diabetes mellitus, whether induced by diabetogenic drugs (e.g., Alloxan Streptozotocin) or produced by autoimmune mechanisms. Alloxan is widely used to induce diabetes mellitus in experimental animals, owing to its ability to destroy the ß-cells of the pancreas possibly by generating excess reactive oxygen species 6, 11.

Oxidative stress is the main cause of pancreatic β-cell necrosis that develops within a few minutes after injection of the drug and in turn, leads to Alloxan-induced diabetes. Antioxidants and metal chelators prevent alloxan-induced diabetes when injected together with or prior to Alloxan treatment. Treatment with antioxidants and scavengers of reactive oxygen species inhibits the development of complications and tissue damage in diabetic patients and experimental animals 12. Horse gram is an incredibly dry season-safe yield. Warm and dry climatic conditions are appropriate for its ideal development. It can be developed up to a height of 1000 m over sea level. The temperature range of 25-300 °C and relative humidity in the range of 50-80% are the required conditions for its growth.

The main constituents that were identified are reported as mome inositol, ethyld-glucopyranoside, n-hexadecanoic acid, linoleic acid, its esters and ethyl derivates, Vitamin E, stigmasterol and 3-stimast-5-en-3-ol. Hence the plant can be medicinally useful as an antioxidant and also in diabetes and other disorders 13. Macrotyloma uniflorum (Fabaceae) is packed with powerful plant pigments called anthocyanins which are believed to be lowering blood sugar levels. Macrotyloma uniflorum is one of the richest sources of antioxidants-substances seeking out and destroying free radicals, harmful molecules that circulate in the body. The chemicals are also found in red grapes, strawberries Sour cherry may acquire new interest mainly due to the fact that it can be considered as a “functional food” because of its high content of antioxidant compounds 14.

However, the biggest insulin effects seem to come from the type of alkaloids, tannins, phenols, flavonoids, and glycosides in the plant. The consumption of these may play a significant role in preventing lifestyle-related diseases such as cancer, diabetes, and cardiovascular and neurological diseases 15. Macrotyloma uniflorum contains various phytochemicals such as anthocyanins and phenols. Anthocyanins are flavonoid pigments in many plants as well as in Macrotyloma uniflorum. Cyanidin is the major aglycone in Macrotyloma uniflorum, and its glycosylated form provides the anthocyanins. All anthocyanins are derivatives of the basic flavylium cation structure. These anthocyanins have been found to be antioxidants of lipids, particularly in foods that inhibit cyclooxygenase enzymes. Cyanidin was intermediate in the efficacy between aspirin and the non-steroidal anti-inflammatory drug, Flurbiprofen. The anthocyanins on heating destroy their effectiveness 16, 18. Therefore, we determined the effect of ethanolic extracts from Macrotyloma uniflorum on the blood glucose Serum parameters, Lipid profile, and antioxidant levels.

Preparation of Plants Extract: The leaves and stems of Macrotyloma uniflorum were collected and washed thoroughly with distilled water to make sure the leaves and stem are free of dust and are shade-dried. The dried leaves and stems are then powdered finely using a mechanical grinder. And then, the required quantity of the powder is subjected to solvent extraction with ethanol. The obtained extract is dried completely using desiccators 15.

Animals: Healthy male Sprague Dawley rats weighing between 250 and 300 g were procured and maintained in polypropylene cages at an ambient temperature of 22 ± 1 °C and relative humidity of 50-60% with a 12 h light/dark cycle in a registered animal house.

The animal experiments were carried out as per the guidelines of the Committee for the Purpose of Control and Supervision of Experiments on Animals approved under the number (1048/a/07/ CPCSEA), India, and approved by the Institutional Animal Ethics Committee (IAEC). Throughout the experimental period, the animals were fed with a standard pellet diet and water ad libitum. One week after treatment, rats with moderate diabetes having glycosuria (indicated by Benedict’s qualitative test) and hyperglycemia (i.e. with a blood glucose level above of 150 mg /dl), were used for the experiment. Prior to the experiment, rats were fasted for about 12 h and were divided into 5 groups (n = 6).

The blood glucose level was estimated by enzymatic glucose oxidase method using a commercial one touch glucometer (Accu check) before treatment (T0), 2h (T2 h), and 1, 2, 3, 4 weeks (T1w, T2w, T3w, and T4w) after administration of extracts. Blood was withdrawn from the tail vein each time. All groups received the above treatments for 30 days.

In-vivo Antioxidant Parameters: 5-5-dithiobis (2-nitrobenzoic acid) (DTNB) reagent was used to estimate reduced glutathione (GSH) levels in tissue homogenates, and the absorbance was read at 412 nm. The amount of GSH in the sample was calculated in microgram per ml from a standard curve obtained and represented in GSH per total tissue protein. Evaluation of kidney homogenate for lipid peroxidation levels and catalase (CAT) activities were carried out.

Histopathology of Liver Tissue and Kidney: At the end of treatment, animals were sacrificed by the spinal cord dislocation technique, and the liver was isolated immediately. The isolated liver and kidney is stored in a 10% formalin solution for the histopathology studies. For the study of the effect of EMULS on liver tissue and kidney, tissue slides are prepared and stained using the Simple stain technique and observed under a light microscope. The organs are homogenized at 40 °C for 1min and centrifuged at 14000* g at 40 °C for 15 min; the supernatant is collected and used for the in-vivo antioxidant studies.

Preliminary Phytochemical Screening: The percentage yield of the ethanolic extract of Macrotyloma uniflorumleaves and stems (EMULS) was about 96.04%. The phytoconstituents present in the plant are tannins, glycosides, flavonoid phenolic compounds, amino acids, and alkaloids. The results are summarized in Table 1.

Estimation of Body Weights: The estimated values of change in body weight of experimental animals are summarized in Table 2 and Fig. 1.

Effect of EMULS on Serum Parameters and Lipid Profile: The estimated values of biochemical parameters in all the experimental rats during the treatment period are summarized in Table 3 and Fig. 2.

TABLE 2: EFFECT OF EMULS ON BODY WEIGHT OF EXPERIMENTAL ANIMALS 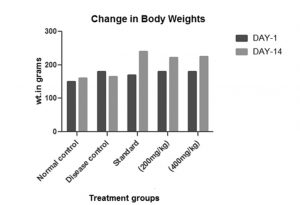 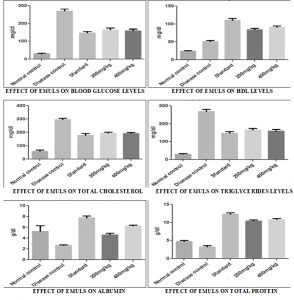 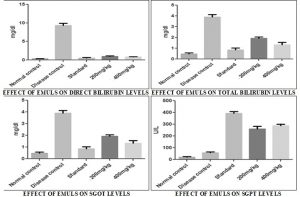 Estimation of In-vivo Antioxidant Studies: The in-vivo parameters like lipid peroxidation, Reduced Glutathione, Catalase were estimated in experimental rats and summarized in Table 4. 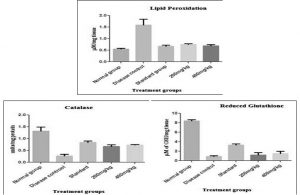 The levels of Catalase have been significantly decreased in the Disease control group, and significantly increased values are seen in Standard and EMULS treated groups. 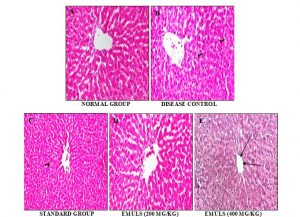 Histopathology of Liver Tissue: Non-diabetic rats have shown the normal structure of the liver tissue. In diabetic control rats, the organ is seen with inflammation and tissue damage.

In standard and extract-treated groups, the liver is seen with mild lobular inflammation, and the tissue recovery is seen which is shown in the figures. Below, Fig. 4 shows the photographs of the liver tissue, which represents the effect of the plant extract.

Histopathology of Kidney: Kidney of the control rats shows normal renal histological structure of renal parenchyma and glomeruli as shown in Fig. 5A and 5B shows kidney of rat from the disease control group with thickened glomerular basement membrane, vacuolated endothelial lining glomerular tuft and vacuolated epithelial lining renal tubules. Treating diabetic rats with standard drug nearly restored the renal tissues to their normal histology with no his to pathological changes, as shown in Fig 5C. In Fig. 5D & E, kidney tissue of diabetic rats treated with EMULS restored the kidneys of diabetic rats to their normal case with no his to pathological changes. Dose-dependent improvement can be observed. 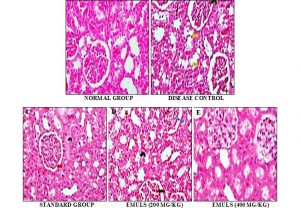 Diabetic nephropathy is mainly associated with excess urinary albumin excretion, abnormal renal function as represented by an abnormality in serum creatinine. Micro albuminuria's common progression to overt nephropathy has led many to consider micro albuminuria to define early or incipient nephropathy. Renal disease is suspected to be secondary to diabetes in the clinical setting of long-standing diabetes. The extracts of Macrotyloma uniflorum, due to its significant hypoglycemic activity, may have inhibited the formation of advanced glycosylation end products and exert a renoprotective effect.

CONCLUSION: In our study, we have found that EMULS decreases blood glucose in Alloxan diabetic rats. The mechanism of action of extracts in reducing diabetes is not known. In fact, it was found that traditional medicines used in human diabetes also have significant antioxidant activity. It may be possible that these extracts may reduce the effect of free radicals released during diabetes which may be one of the causative agents for tissue distraction and insulin resistance. Treatment with antioxidants and scavengers of reactive oxygen species inhibits the development of complications and tissue damage in diabetic patients and experimental animals.

In conclusion, the results of the present study show that the extract brings back the blood glucose levels to normal in diabetes-induced rats, i.e. shows hypoglycemic activity. Although the exact chemical compounds responsible for the hypo-glycemic effects of the extract still remain speculative, experimental evidence obtained in the present study indicates that the extract possesses Anti-diabetic property. In near future, anthocyanins might be the building block for new diabetes treatments. Meanwhile, don't rely on Macrotyloma uniflorum to control insulin problems. But since anthocyanins aren't toxic to humans, there's no harm in eating Macrotyloma uniflorum as part of a healthy diet. The present studies indicated a significant anti-diabetic and renoprotective effects with the ethanolic extract of Macrotyloma uniflorum   and supported its traditional usage in the control of diabetes and its complications.

CURRENT & FUTURE DEVELOPMENTS: Currently, many medicinal plants used to treat diabetes mellitus do not have side effects. Treatment development for diabetes mellitus needs to be investigated in the human subject for confirmation of these results. Future research should focus on human subject treatment with medicinal plants to eliminate complications of the chemical medicine drugs.

ACKNOWLEDGEMENT: Special thanks to the management and principals of SVS Group of institutions, School of Pharmacy, Bheemaram, Warangal and Vignan Institute of Pharmaceutical Technology, Visakhapatnam.