ABSTRACT:  Ethnopharmacological relevance: A preliminary ethnobotanical survey of diabetic patients in Health Community Centre Sering, Medan, North Sumatera, Indonesia from 2010-2011 revealed Syzygium polyanthum (Wight) as the most commonly used herb in the traditional management of diabetes mellitus. Yet, no substantial pharmacological evidences are available to validate this claim. Material and methods: A survey on the traditional herbs used among 264 diabetic outpatients attending the Health Community Centre Sering, Medan, North Sumatera, Indonesia was carried out from January 2010-April 2011.  The most commonly used herb was then extracted serially with petroleum ether (PEE), chloroform (CE), methanol (ME) and water (WE); and the extracts were used for detailed anti-diabetic evaluation in both non-diabetic rats (NDR) and streptozotocin-induced diabetic rats (SDR).  Results: The most commonly used herb was Syzygium polyanthum (Wight) leaf. In NDR, the increasing on blood glucose levels (BGLs) of intraperitoneal glucose-loaded rats (1g/kg) were not significantly altered by PEE, CE, and ME (1 g/kg) within 120 minutes after glucose loading. However, the BGL in WE group was significantly altered at 30 minutes after glucose loading (P < 0.05), meanwhile metformin significantly altered the BGL in 90 minutes (P<0.01), and 120 minutes (P<0.05) compared with control group. In SDR, anti-hyperglycaemic test with single dose administration of the extracts demonstrated that metformin- and ME-treated group significantly reduced the BGL.  Conclusion: The methanol extract of S. polyanthum (Wight) leaf proved to be the most effective anti-hyperglycaemic preparation.

INTRODUCTION: Diabetes mellitus is a major health concern worldwide; it presents major challenges to patients and health-care givers and burdens most national economies.

WHO estimate data show that the world’s diabetic population would rise by 37%  between the year 2000 and 2030  and Asia is indicated  as the major site of this rapidly emerging diabetes epidemic 1. In the same study, it was shown that, among the top ten countries to witness the epidemic, four are Asian—Indonesia, Pakistan, Bangladesh, and the Philippines. In these countries, despite the advancements  in conventional antidiabetic medicine 2, a great number of people still rely, completely or partially, on traditional methods of using natural products to control their blood glucose levels, especially medicinal plants that are believed to have anti-diabetic properties. These combined situations have stimulated and sustained research interest in anti-diabetic medicinal plants with the aim to standardize and/or source natural products with relative therapeutic advantages.

The use of plant-based anti-diabetic medicinal products has been known since ancient times  3, 4. Well over 1000 plants and their products (active natural principles and crude extracts) have been reportedly used in the control of diabetes in the traditional medicinal systems of many cultures worldwide 3, 5, 6. Although, this knowledge of traditional use of herbs as primary components of holistic approaches to diabetes management is becoming more and more common 4 there is however,  no scientific reports to date, on the frequency of the use of herbal medicines in the management of diabetes mellitus in Medan, North Sumatera, Indonesia.

Thus, the first objective of this study was to perform an ethnobotanical study among diabetic patients in the Health Community Centre Sering, Medan, Indonesia.  It was found from the survey that Syzygium polyanthum (Wight) is the most commonly used herb by the patients in traditional management of diabetes (data are shown below). This finding ignited our interest to study the anti-diabetic properties of S. polyanthum with the aim of pharmacologically validating the traditional claim.

Syzygium polyanthum (Wight), a plant belonging to the botanical family Myrtaceae, grows wild and is also usually planted in yards and around most houses in Asia. The herb is commonly known as Ubar serai and meselengan or Indonesia laurel in Indonesia; samak, kelat samak, and serah in Malaysia; and manting in Jawa. It is commonly grown for its leaves, which are used in a local cuisine (curry) and with other complementary herbs in the management of such ailments as gouty arthritis, hypertension, gastritis, diarrhea, urticaria and diabetes mellitus.  The tree bark is used as a component of a local dye in Indonesia 7.  The activity-guided approach, when employed in the initial screening for biological activity lays a foundation for easy identification of the active principle(s), hence  a fundamental requirement in the natural product development and sourcing of therapeutic agents from medicinal plants.

The Health Community Centre Sering (HCCS), Medan, is located in Sidorejo village, Sub district Medan Tembung, North Sumatera, Indonesia. To its northern side lies Sidorejo Hilir, its southern side oversees Willem Iskandar Street, to the east of it exists Bubu and Panglima Street, and Sei Kera is situated at its western side. HCCS serves 3 villages in Medan Tembung, North Sumatera, Indonesia. The sub-district has a population of 62.668, comprised of 13.019 families, and spans 184 hectares.  Medan is in the northeastern Sumatera island in north Sumatera province. 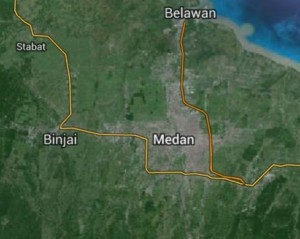 The study was carried out between the years of 2010-2011. The population suitable for the study consisted of diabetic outpatients, who amounted to 264 subjects (January 2010-April 2011). Samples (n = 56) were chosen by an accidental sampling technique; and the selected subjects were provided with comprehensive briefing and were asked for their informed consent. The sample size was determined using the Lameshow Formula based on a population of 264. Data collection was done using interviews and questionnaires. The respondents mentioned the Indonesian (local) names of the herbs used; hence, their scientific and family names were determined by the research team. The survey showed the most commonly used herb was Syzygium polyanthum (57.1%) (Tables 1 and 2). Hence, a study was designed to investigate its anti-diabetic activity.

The leaves of Syzygium polyanthum (Wight) Walp. were collected from Titi Kuning, Medan, Indonesia. The plant was identified at the School of Biological Sciences, Herbarium Medanense MEDA, University of Sumatera Utara, Medan, Indonesia and given a herbarium identification number - No.13/MEDA/2012. The fresh leaves were dried under shade and ground into powder.  About 1.5 kg of the powdered leaf was extracted serially by maceration  in petroleum ether (40-60°C), chloroform, methanol  and water  according to a previously described procedure in our laboratory 8 to obtain four extracts namely petroleum extract (PEE), chloroform extract (CE), methanol extract (ME) and water extract (WE).  The freeze-dried extracts were kept in the freezer (-20 °C) until used for animal experimentation.  Prior to treatment, the extracts were reconstituted using 5% tween 80 in normal saline 0.9%.

Non-diabetic male Sprague-Dawley rats (180-250 g) divided into six groups (n=6), after an overnight fast treated as follows: Group 1, the normal control received  normal saline (10 ml/kg.); group 2, the positive control was treated with metformin (500 mg/kg) and groups 3 - 6 were treated with 1 g/kg each of PEE, CE, ME and WE  respectively. All treatments were prepared in 5% v/v Tween 80 in normal saline. Exactly one hour after saline/drug/extract treatment, the rats were administered 1g/kg of glucose by intraperitoneal injection.  Afterwards, blood glucose of the rats were measured time 0, 15, 30, 45, 60, 90 and 120 minutes.

Streptozotocin (55mg/kg) was injected intraperitoneally to 16 hrs fasted rats, provide with 10 % dextrose and observed for 3 x 24 hrs.  Streptozotocin solution (50mM sodium citrate buffer, pH 5.4) was freshly prepared for each use.  Animals with fasting blood glucose ≥ 11 mmol/L were considered diabetic and used in the study.

Thirty six diabetic rats were divided into six groups (n=6) and treated as follows: Group 1, the diabetic control received normal saline (10 ml/kg); Group 2, the positive control received a single dose of metformin (500 mg/kg). Groups 3 – 6 were treated with 1g/kg each of PEE, CE, ME and WE, respectively.  Blood glucose levels were measured from the tail vein prior to treatment and at 1, 2, 3, 5, and 7 hours after treatment.

RESULTS: The use of medicinal herbs among diabetic patients in Health Community Centre Sering, Medan, North Sumatera, Indonesia was investigated. A total of 56 diabetic patients responded to the questionnaires during the study (Table 1). It was found that 35 respondents (62.5%) used herbs to treat their diabetic condition, of which 27 patients (77.1%) take them as a decoction. Only 5 respondents (14.3%) used herbs which were already packaged, such as in capsule or pills. The time of consumption was either after meals (54.3%) or  1hour (interval time) after taking a conventional medicine (85.7%)/ From the survey, the most commonly used herbs were found to be Syzygium polyanthum (Wight) leaves (57.1%), Piper betie l.(31.4%), and Nigella sativa (25.7%) (Table 2).

TABLE 2: FREQUENCY OF DISTRIBUTION OF MEDICINAL HERBS USED BY RESPONDENTS

Yields of the extracts:

Acute anti-hyperglycaemic test in STZ-induced diabetic rats (SDRs): As shown in Fig.2, of the four extracts administered only ME-treated group showed  significant decrease in blood glucose 7 hours after administration, compared  with the diabetic control (P < 0.01). Metformin on the other hand exerted significant effect in reducing blood glucose from the first hour (P < 0.01) to the seventh hour (P < 0.001) of the study. 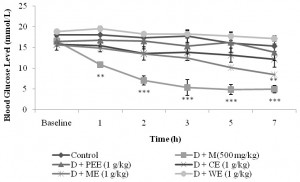 DISCUSSION: In the present study, the use of  20 medicinal plants as alternative therapies to control blood glucose levels by 62.5% of the 56 diabetic patients in the Health Community Centre, Medan,

Indonesia was reported. Syzygium polyanthum (Wight) was found to be most commonly used herb. Intraperitoneal glucose tolerance test (IPGTT) was performed to obtain hyperglycaemic condition.  The inhibition of the rise of the BGL is used to determine whether the extracts or drug have anti-hyperglycaemic activity 9. The IPGTT showed clearly that extracts from S. polyanthrum did not alter glucose tolerance in normal rats.   Metformin inhibited the rise of the BGLs significantly at 90 and 120minutes. Contrarily, WE shown the significant effect at 30minutes after glucose loading which showed the increasing of BGL.  The water extracts usually content glucose in the form of glycoside. Therefore, the administration of exogenous glucose on top of glucose loading would increase the BGL further. Metformin is a biguanide class that acts as anti-hyperglycemic, not hypoglycemic 10, 11. Its blood glucose-lowering action does not depend on the prescence of the functioning pancreatic b-cells 10, 12.

It does not stimulate insulin release from the pancreas and generally does not cause hypoglycemia, even at a large dose.  Metformin reduces glucose levels primarily by decreasing hepatic glucose production and by increasing insulin action in muscle and fat.  These actions are mediated at least partly by the activation of AMP-activated protein kinase (AMP kinase) 10, 12, 13.

Consequently, metformin could attenuate the rise of the BGL in the IPGTT but could not bring it below the normal level. These agents are therefore more  appropriately termed “euglycemic” agents 12.

Animals representing a syndrome of insulin resistance and type 2 diabetes, with characteristics identic to human 14. Streptozotocin (STZ) diabetogenic property causing insulin deficiency, hyperglycaemia, polydipsia, and polyuria, which mimic human type 1 diabetes mellitus 15.  The most frequently administration dose of STZ to rats is between 40 to 70 mg/kg. In adult rats, 60 mg/kg is the most common dose of STZ in order to induce insulin dependent diabetes but single dose below 40mg/kg may be ineffective 16-18. The present study used 55 mg/kg to induce hyperglycaemia and not yet high enough to cause mortality. Diabetic rats showed polyuria, polydipsia, polyphagia by observations and also weight loss and hyperglycaemia. The results confirmed diabetic rats as subjects for the experiment if the BGL was above 11mmol/L.

In STZ-induced diabetic rats, anti-hyperglycaemic test with single dose administration of the extracts demonstrated that metformin- and ME-treated group significantly reduced the BGL. This finding suggests that the effective anti-diabetic compounds in S. polyanthum were most soluble in methanol,  a tendency towards polar compounds.

CONCLUSIONS: In conclusion, this study successfully validated the anti-hyperglycaemic activity of S. polyanthum (Wight) leaf, the most commonly used herb by the diabetic patients in Medan, North Sumatera, Indonesia. Further investigations are needed to identify and characterize with certainty the bioactive compounds responsible for the observed anti-diabetic activity.

CONFLICT OF INTERESTS STATEMENT: The authors declare that they have no conflicting interests.

ACKNOWLEDGEMENTS: The authors are especially grateful to Universiti of Sains Malaysia (USM), Directorate of General Higher Education (DIKTI), and University of Sumatera Utara (USU) for providing the grant for this study.