ABSTRACT: The objective of the research was to investigate and evaluate anti diarrheal, antioxidant activity Mimusops elengi Linn. unripen fruit extracts. Mimusops elengi Linn. unripen fruits is considered as one of the best medicinal plants due to its several pharmacological uses mentioned in Unani as well as ethnomedicine. The various extracts of the plant (bark, fruit, leaves, seed, and flowers) have been disclosed to be cardiotonic, alexipharmic and stomachic, hypotensive, antibacterial, anthelmintic, anti gastric ulcers, teeth cleaner and renewable sources of energy. This review is an attempt to compile and document information on conventional uses and phytochemical properties of Mimusops elengi Linn. unripen fruits. The antidiarrhoeal activity of pet ether, chloroform and methanol extracts of Mimusops elengi unripen fruits were assessed using castor oil-induced diarrhea model in rats. Further, the effects of pet ether, chloroform, and methanol extract on gastrointestinal tract motility after charcoal meal dispensed were evaluated. Loperamide was taken as positive control. The plant extracts showed decisive and significant (P<0.05) thwarting action against castor oil-induced diarrhea in rats when tested at 200 mg/kg. The methanol extract showed decisive and significant (P<0.001) curtailed in gastrointestinal motility in charcoal meal test in rats. The results specify the possible anti-diarrheal effect of the plant extracts and confirmed the use of this herbal therapeutics as a non-specific treatment for diarrhea in folk medicine.

INTRODUCTION: Mimusops genus belongs to a family Sapotaceae that comes under sub kingdom Vascular plants. M. elengi is evergreen medium to large-sized tree. The tree is native to India, Sri Lanka, the Andaman Islands, Myanmar, and Indo-China, but is commonly planted as an ornamental tree throughout the tropics, also in Africa. Different parts of this plant are utilized in the traditional system of medicine for treatment of different ailments 1. In Ayurveda, the bark, flowers, fruit and seeds are of great value for treating various diseases.

The diseases or illnesses such as cardiotonic, alexipharmic, stomachic, astringent cooling, anthelmintic, tonic, and febrifuge properties and is also helpful in alleviating kapha and pitta doshas are treated by using different parts of M. elengi 2.The bark and fruits of this plant are used in the medication and treatment of diarrhea and dysentery and decoction of the bark is used as a gargling agent 3. The leaves are familiar with analgesic and antipyretic 4. M. elengi also utilized in sanitation dermal wounds, anti-ulcer effects and boosted the fertility in women.

Plant Material: Fresh raw fruits of Mimusops elengi unripen were collected from Salipur, Cuttack, Odisha, India which was identified and authenticated by Associate professor Dr. Gita Dash. The voucher specimen was given the no. 001/18.

Preparation of Extract: The air-dried powdered unripe fruits were loaded into Soxhlet apparatus and were subjected to extraction for about 72 h with petroleum ether (60-80 ºC), chloroform and methanol successively. The solvents were distilled and evaporated off after extraction, and the extracts were concentrated and reduced under reduced pressure. The extracts were kept in refrigerator until tested 6. The four extracts were then dissolved subjected to phytochemical analysis.

For the pharmacological tests, the extracts were dissolved in 1% Tween-80 in normal saline solution to prepare 200 mg/kg concentrations 5. The chemical constituents of the extracts were identified by qualitative chemical tests and further confirmed by GCMS study for the presence of alkaloids, carbohydrates, sterols, and flavonoids.

Superoxide Scavenging Activity: Superoxide scavenging action of the plant extract was dictated by McCord and Fridovich's method, 1969, which relies on light-evoked superoxide generation by riboflavin and the relating reduction of nitroblue tetrazolium. The plant extracts of 0.1 ml of different concentrations and 0.1 ml of 6 μM ethylenediamine tetraacetic acid comprises of NaCN, 0.1 ml of 50 μM nitroblue tetrazolium, 0.05 ml of 2 μM riboflavin were transferred to a test tube, and last volume was made up to 3 ml using phosphate buffer.

Then the assay tubes were uniformly illuminated with incandescent light (40 Watts) for 15 min and thereafter the optical densities were estimated at 560 nm. A control was prepared using 0.1 ml of individual vehicle in the place of plant extract/ ascorbic acid. The percentage inhibition of superoxide generation was evaluated by comparing the absorbance values of control and experimental tubes 6, 7.

Percentage inhibition was determined by using the following equation:

Then, 1 ml of this Fenton reaction mix was employed with 0.2 ml of 8.1% sodium dodecyl sulphate, 1.5 ml of 0.8% thiobarbituric acid and 1.5 ml of 20% acetic acid. The total volume was then made to 5 ml by adding distilled water and kept in an oil bath at 100 ºC for 1 hour. After the blend had been cooled, 5 ml of 15:1 v/v butanol-pyridine mix was added and included. Following energetic shaking, the tubes were centrifuged at 4000 rpm for 10 min and the absorbance of the organic layer containing the thiobarbituric acid reactive substances was estimated at 532 nm. A control was assembled using 0.1 ml of vehicle in the place of plant extract/ascorbic acid. The rate of restraint or percentage inhibition of hydroxyl radicals by the extract/compound was determined by comparing the absorbance values of the control and the experimental tubes as calculated for hydroxyl radical assay 8, 9.

DPPH Radical Scavenging Activity: Free radical scavenging or rummaging action was predispose or inclined by using 2, 2-diphenyl-1-picrylhydrazyl (DPPH) radical with a slight alteration. An aliquot of 3 ml of 0.004% DPPH solution in methanol and 0.1 ml of plant extracts at various concentrations were mixed and blended. The mixture of the blend was shaken energetically, vigorously and allowed to reach a constant state at room temperature for 30 min. Decolorization of DPPH was resolute by measuring the absorbance at 517 nm. A control was arranged by using 0.1 ml of respective vehicles in the place of plant extract/ascorbic acid 10, 11.

Animals: Inbreed Albino Wistar rats of either sex weighing somewhere between 200 and 260 g were utilized for the study. They were housed in polyacrylic cages and fed with standard rodent pellet diet and given water ad libitum. The animals were housed under standard research facility ecological condition for an acclimatization time of 14 days preceding play out the analyses. Every test convention was endorsed by the institutional creature morals council before the direct of investigations (27/IAEC/IPT/17).

Castor Oil Induced Diarrhea: Rats were divided into five groups (n = 6) and, fasted for 18 h and water was provided ad libitum. The methanol (200 mg/kg, p.o.), chloroform extract (200 mg/kg, p.o.) and pet ether extracts of Mimusops elengi unripen fruits were administered orally to the first three groups of rats. One group received 10 ml/kg 0.5% v/v aqueous Tween 80 and served as a negative control. Another group received the standard drug loperamide (3 mg/kg, p.o.) as a positive control. After 1 h of treatment, all the animals were challenged with 1 ml of castor oil orally, by gavages and watched for consistency of fecal material 12, 13.

Small Intestinal Transit: Rats were divided into five groups (n = 6) and fasted for 18 h before the experiment. Each animal was given or administered with 1 ml of charcoal meal orally (5% activated charcoal in 5% acacia) followed by oral administration of methanol (200 mg/kg, p.o.), chloroform extract (200 mg/kg, p.o.) and pet ether extracts to the first three groups or sets of animals. The fourth group was treated with 0.5% v/v aqueous Tween 80 (10 ml/kg, p.o.) and served as a negative control. The fifth group received atropine (0.1 mg/kg, i.p.), as the positive control. Thirty minutes later, each animal was killed and the intestinal distance moved by the charcoal meal from the pylorus to caecum was measured and expressed as the percentage of distance moved 14, 15.

Statistical Analysis: The experimental results were analysed using the Statistical Package for the Graphpad Prism results are expressed as a mean ± standard error of the mean (SEM), and statistical analyses were carried out by employing one-way analysis of variance (ANOVA), followed by Tukey T-test to compare results with controls. In all cases, statistical significance was set at p<0.05.

RESULTS: The results of the preliminary phytochemical screening of methanol and aqueous extracts of Mimusops elengi unripened fruits flower have been presented in Table 1. 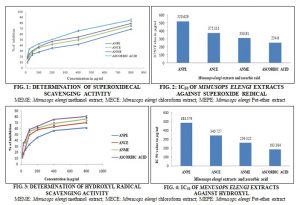 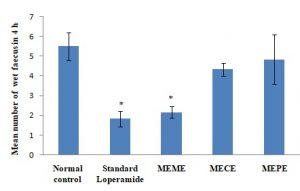 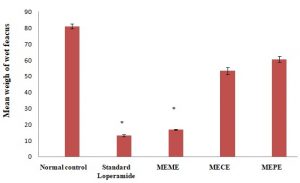 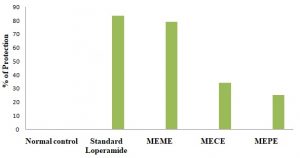 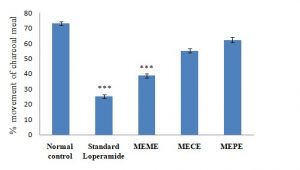 A similar reduction in the gastrointestinal transit of charcoal meal in the rat was achieved with the intra-peritoneal injection of atropine sulphate (0.1 mg/kg) shown in Fig. 11. GI motility depicts the contraction of the muscles that blend and propel contents in the gastrointestinal tract. Charcoal meal test in rodents is a technique used to study the impact of medication on the motility of intestine. In present study Mimusops elengi methanol extract was observed to be the inhibitor of intestinal motility 18.

CONCLUSION: The phytochemical analysis of the extracts demonstrated the presence of alkaloids, saponins, flavonoids, tannin, sterols and/or terpenes and sugars. These constituents may in charge or responsible for the antidiarrhoeal activity of Mimusops elengi unripe fruits.

The antioxidant activity may also be ascribed to the presence of a polyphenolic compound present in the methanol fruit extract. The results indicate that the methanol extract of Mimusops elengi unripe fruits possess significant anti-diarrhoeal activity due to its inhibitory effect both on gastrointestinal propulsion and fluid secretion.