Ailanthus altissima Swingle (Simaroubaceae) is commonly known as “Tree of heaven”. The methanolic extract of root bark of A. altissima (MEA) was taken for anti-diarrhoeal activity. Investigations were carried out on castor oil induced diarrhoea and small intestine transit method on mice. In former method, MEA 200 (mg/Kg) were reducing the total weight of the faeces of group (0.163±0.028) in comparison to control group faeces (0.652±0.041), were statistically significant (P<0.001). In latter method, the MEA 200 (mg/Kg) inhibited 72.414% of the distance travelled by the charcoal and were significant statistically (P<0.001).

INTRODUCTION: Diarrhoea is the condition of having three or more loose or liquid bowel movements per day. It is a common cause of death in developing countries and the second most common cause of infant deaths worldwide. The loss of fluids through diarrhoea can cause dehydration and electrolyte imbalances 1. It is often caused by a virus or bacteria and can be acute (short term) or chronic (long term) - lasting more than two to three weeks 2. Most people are affected by diarrhoea at some time in their lives. It is often accompanied by stomach pains, feeling sick and vomiting. It is usually due to consumption of drinking water contaminated with bacteria, undercooked meat and eggs or inadequate kitchen hygiene - in other words, an infection 3.

Globally, seven children die of diarrhoea every minute, mainly due to poor quality drinking water and malnutrition, which still affects the majority of the world population. It is more hazardous in children and showed in Fig. 1.

FIG. 1: LOSS OF ONE LITRE OF FLUID IN DIARRHOEAL STOOLS IN ADULTS (70 KG) CONSTITUTES ABOUT 7 % OF TOTAL ECF (EXTRACELLULAR FLUID) COMPARTMENT. LOSS OF 0.8 LITRES OF FLUID IN AN INFANT (7 KG) WITH APPROXIMATELY 1.4 TO 1.6 LITRES OF ECF VOLUME IS EQUVALENT TO ALMOST HALF OF THE LATTER AND THEREFORE IT IS MUCH MORE HAZARDOUS

Diarrhoeal diseases are a leading cause of childhood morbidity and mortality in developing countries, and an important cause of malnutrition. In 2003 an estimated 1.87 million children below 5 years died from diarrhoea. Eight out of 10 of these deaths occur in the first two years of life. On average, children below 3 years of age in developing countries experience three episodes of diarrhoea each year. In many countries diarrhoea, including cholera is also an important cause of morbidity among older children and adults 4. WHO African and South-East Asia Regions combined contain 78% (1.46 million) of all diarrhoea deaths occurring among children in the developing world; 73% of these deaths are concentrated in just 15 developing countries 5. Ailanthus is a genus of tall, lofty trees, distributed in Indo-Malaya, China, Japan and Australia 6. The genus is noted for its antidiarrhoeal, antidysenteric, antifertility properties. Ailanthus altissima Swingle (Simaroubaceae) is commonly known as “Tree of heaven”. It is a common tree in hilly areas, where it sprouts up just above anywhere, including alleys, sidewalks, parking lots, and streets. It is a 12.5 to 25 m tall deciduous tree with blunt, clumsy branches. It produces abundant root suckers. Bark has nauseating odour, bitter in taste and it is deep-green colour which change gradually to yellowish brown. Root is white, hard and woody. It is covered with white fibrous bark. The outer part of which is brittle, over which is a gray epidermis with little eruption. The bark is rough, bark next to wood is white, it produce disagreeable odour when broken and taste is astringent. Leaves of the plant are odd pinnate and  0.9m long, pubescent or nearly glabrous, leaflets are very numerous which about 2 inches long, ovate, smooth, acute and have a few blunt, glandular teeth at the base (1-3 pairs). Flowers are small, green and collected in large terminal panicles, polygamous or generally dioecious. The calyx with 5 united sepals, 5 petals,  (small, green and longer than sepals), stamens are 10 in male flowers, fewer in female, pistil surrounded at base by a disk, 3 to 5 carpels, one-ovuled, with united styles. While fruits are flat, membraneous samara, 2.5-5 cm diameter, purplish yellow, twisted at the top 6.

Animals: Swiss wister mice (25-30 g) of both sexes were obtained from the animal house of the College of Pharmacy, Institute of Foreign Trade &Management, Moradabad; were maintained in a temperature and humidity controlled environment on a 12-h dark/light cycle. The food was withdrawn 24 h before the experiment, but water was allowed add libitum. All studies were performed in accordance with the guide for the care and use of laboratory animals, as adopted by the Institutional Animal Ethical Committee, approved by CPCEA, India (837/ac/2004).

Preparation of the plant extract: Shade dried root bark of A. altissima 100 g was powdered coarsely and passes through sieve number 40. The root bark powder was successively extracted in soxhlet apparatus.

Castor oil induced diarrhoea: 24 mice were allowed to fast for 18 h and divided into five groups of 6 animals each. All groups received castor oil at a dose of 0.4 ml/animal orally. 30 min after castor oil administration, the first group (control group) received vehicle (0.5% Tween 80 in distilled water), the second group received reference drug loperamide (3mg/Kg body weight) and third, fourth and fifth group received methanolic extract 100, 150 and 200 mg/Kg body weight, respectively. After the administration, the animals were placed separately. The severity of diarrhoea was assessed each hour for 6 h. The total number of faeces and diarrhoea faeces excreted and the total weight of faeces were recorded within a period of 24 h and compared with the control group. The total number of diarrhoea faeces of the control group was considered 100%. The results were expressed as a percentage of inhibition of diarrhoea 23, 24.

Small intestinal transit: Animals were divided into five groups of six mice each, and were given orally 1 ml of charcoal meal (5% activated charcoal suspended in physiological saline) 60 min after an oral dose of drugs or vehicle. Group I was administered with physiological saline (10 ml/Kg) and animals in groups II, III and IV were administered MEA (100, 150 and 200 mg/Kg). Group V received atropine sulphate (0.1 mg/Kg) as standard drug. After 30 min animals were killed by cervical dislocation, and the intestine was removed without stretching and placed lengthwise on moist filter paper. The length of the intestine (pyloric sphincter to caecum) and the distance travelled by the charcoal as a percentage of that length were evaluated for each animal, and group means were compared and expressed as percentage inhibition 25.

Statistical analysis: All the in vivo experimental results were expressed as mean ± S.E.M. Data were analyzed by analysis of variance (ANOVA) followed by Dunnett’s test, with the level of significance set at P<0.05.

RESULT AND DISCUSSION: Castor oil causes diarrhoea due to its active metabolite ricinolic acid which stimulates peristaltic activity in the small intestine, leading to changes in the electrolyte permeability of the intestinal mucosa. The results were similar to that of standard drug loperamide (3 mg/Kg) with regard to the severity of diarrhoea. MEA significantly reduced intestinal motility and also led to a marked reduction in the weight and the volume of the intestinal contents which was highest at the dose 200 mg/Kg of the body weight and is significant (P<0.001) when compared with the control group and expressed in table 1. In control group of experiment, the mice that did not receive the plant extract, showed typical diarrhoea signs such as watery and frequent defecation. The MEA produced a marked anti-diarrhoeal effect in the mice. Loperamide apart from regulating the gastrointestinal tract is also reported to slow down transit in the small intestine, reduce colon flow rate, and consequently any effect on colonic motility. Mean distance travelled by charcoal, as % total length of small intestine (cm) is less at 200 mg/kg of the dose of MEA and is comparable with standard drug atropine sulphate which is used as positive control and shown the fig. 2 and table 2 and statistically significant (P<0.001).

Data are expressed as mean ± S.E.M.; n = 6 in each group. When compared to control group for castor oil induced diarrhoea. (One-way ANOVA followed by Dunnett’s test) 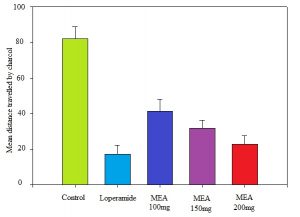