ABSTRACT: Statins exhibit their pharmalogical effects by competitive inhibition trough binding with active sites of enzymes. Rosuvastatin, of all statines, has the most binding interactions with the enzyme, and being the most potent statin, it is presumed that the strength of enzyme binding directly influences its potency. Reduction of derivatives of mevalonic acids results with decreased risk of cardiovascular diseases and very significant pleotropic effect of statins. Rosuvastatin comes in the form of calcium salt. During the clinical trial it has been marked as superstatin with its proven activity in lowering cholesterol levels. Aim of this paper was to examine the pleotropic properties of rosuvastatin trough investigate if rosuvastatin shows antihyperalgesic / antiedemic effects by inflammatory pain model in rats trough effects of systemically applied rosuvastatin in inflammatory pain model in rats and effects of locally, peripherally applied rosuvastatin in inflammatory pain model in rats.

Inflammation is a protective response to a body that aims to eliminate the initial cause of cell injury as well as necrotic tissue resulting from its action. It is related to the reparation process involving regeneration of parenchyma cells / formation of fibrous scarring. It can also be defined as localized tissue response to irritation, injury or infection. It is a process by which an organism tries to dilute, destroy or isolate a detrimental agent and to repay the resulting damage. It can be said that inflammation is a natural process of defense of organisms. Etiological factors of inflammation may be endogenous (immune reactions, tissue ischemia) and exogenous (physically, chemically, biologically) 4, 5, 6.

Rosuvastatin: Rosuvastatin is a chemical 7- [4- (4-fluorophenyl) -6- (1- methylethyl) -2- (methyl-methylsulfonylamino)- pyrimidin- 5- yl]- 3, 5-dihydroxy- enol acid and the new drug market in the statin group. It is available in the form of calcium salts. During clinical trials, it is labelled as superstatin with its proven activity in lowering cholesterol levels. It is intended for the treatment of primary hypercholesterolemia, type IIa, including heterozygous hypercholesterolemia, or mixed dyslipidemia, type IIb in adults, adolescents and children over 10 years. Also is used as an additional medicine with correction of other risk factors in the prevention of several cardiovascular events in patients. The aim of this study is to investigate the possible anti - edematous and antihyperalgesic activities of Rosuvastatin, systemically and local peripheral applied in inflammatory pain model in rats 7, 8.

MATERIALS AND METHODS: Study was held on male Wistar rats, weighting 220 - 280 g and was randomly used in the experiments. The animals were kept in vivarium under standard laboratory conditions: 20 - 25 °C temperature with natural day and night cycle (12 / 12 h) and relative humidity of 60%. All of the animals were housed in cages with free access to food and water. On the day of the experiment, the animals were transferred from the vivarium to the laboratory at least 1 h before the experiment commenced. All experiments were always performed at the same time of day (8 - 17 h). The experimental group consisted of 6 - 12 animals. The control group of animals obtained carrageenan and an appropriate volume of vehicle and was subjected to the same experimental procedure. Each animal was used in experiment only once 9.

Inflammation induced by carrageenan, is acute, nonimmune, well - researched, and highly reproducible. Cardinal signs of inflammation -edema, hyperalgesia, and erythema - develop immediately following subcutaneous injection, resulting from action of inflammatory agents - bradykinin, histamine, tachykinins, complement and reactive oxygen, and nitrogen species. Neutrophils readily migrate to sites of inflammation and can generate inflammatory reactive oxygen and other species. The inflammatory response is usually quantified by increase in paw size (edema) which is maximal around 5 h post carrageenan injection and is modulated by inhibitors of specific molecules within the inflammatory cascade.

Systematic Application: Rosuvastatin was suspended in distilled water with the addition of Tween 80 drops and homogenized on a vortex mixer for 15 min. This suspension was administered by oral route in the final volume of 2 ml/kg body weight of the rats. Carrageenan (1%w/v) was dispersed in saline 24 h pre-planned experiment and intraplantar was administered in a volume of 0.1 ml (see Fig. 1) 10, 11.

FIG. 1: SHEMATIC DIAGRAM FOR MONITORING OF HYPERALGESIA / EDEMA INDUCED BY THE INJECTION OF CARRAGEENAN (CAR) INTO THE RIGHT PAW OF RATS (A) AND THE ANTI-HYPERALGIC/ANTI - EDEMA EFFECTS OF SYSTEMIC APPLIED ROSUVASTATIN (ROSUVASTATIN) (B)

Local Peripheral Application: Rosuvastatin was dissolved in solvent (95% physiological solution and 5% dimethylsulfoxide - DMSO) and applied intraplantar in the left pair of rats with carrageenan, at a final volume of 0.1 ml (see Fig. 2) 10, 11. 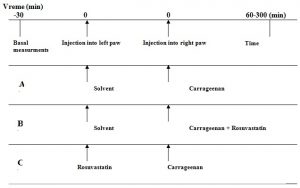 Antihyperalgesic Activities: The development of hyperalgesia and the effect of systemic and locally peripherally applied rosuvastatin on hyperalgesia were monitored by the electric Von Frey apparatus (IITC Life Science, Woodland Hills, CA), which measures the threshold of digestion of the paws on a gentle mechanical stimulus (expressed in grams). Basal measurements were performed prior to treatment (carrageenan and / or rosuvastatin) and the test for 60, 120, 180, 240 and 300 min after carrageenan injection. The basal and test measurements were performed on the same (right) last rush of the rats. The measurements were repeated 4 times consecutively at each time point, and the mean value d (g) calculated from 4 measurements per animal was individually used in further calculations. For substances that reduce the difference in the pressure of hammering before and after treatment compared to the control group, it can be said to exhibit anti-hyperalgesic activity 10, 11.

Statistical Analysis: The ED50 value, with 95% confidence intervals was determined by regression analysis of the linear portion of the corresponding dose - effect ratio at the time of maximum effect. The results are presented as the mean ± SEM (standard error) in a group of 6 - 12 animals. In the statistical processing of the results, the following computer programs were used: Pharm PCS (Micro-Computer Specialists, Philadelphia, PA, USA), SPSS 18 for Windows and Microsoft Excel.

Following the local peripheral administration of rosuvastatin (0.25 - 1 mg/caps) together with carrageenan, a statistically significant and dose-dependent reduction in the difference in pacemaker pressure elimination pre and post treatment compared with the control group was observed, d (g), in the Von Frey test (p <0.01, single-phase ANOVA) (Fig. 4B - large chart). Maximum antihyperalgesic effect (% AH), rosuvastatin reaches 60 - 180 min and corresponding % AH are 47.49%, 56.82% and 73.35% for rosuvastatin doses of 0.25; 0.5 and 1 mg/paw, respectively (Fig. 4B - small chart). The curve of the log dose ratio and the effect of rosuvastatin constructed for values of maximal % AH has a high coefficient of correlation (r = 0,991). The corresponding ED50 value ± SEM (95% confidence interval) determined at the time of the maximum effect of the test doses is 0.31 ± 0.04 (0.07 - 1.41) mg / paw. The effects of rosuvastatin are local nature, since the effect of the highest dosed dose of rosuvastatin (1 mg/paw) administered contralaterally, in the healthy rat rats (p>0.05).

Anti-edematous Effect of Rosuvastatin in the Rat Inflammatory Pain Model: In the model of inflammatory pain in rats, rosuvastatin exhibited statistically significant and dose-dependent anti-edematous effects after systemic and local peripheral administration, with the effect more pronounced after local peripheral administration.

Following systemic administration, rosuvastatin (10 - 50 mg/kg/day) reduced dose-dependent decrease in the volume difference between the treated (inflammatory) and basal volume compared with the control group (p<0.05; single-factor ANOVA) (Fig. 5A - large graph). The investigated doses of rosuvastatin 10, 30 and 50 mg/kg give the maximum antiedematous effect of 20.50%, 33.33% and 33.78%, respectively (Fig. 5A - small graph). 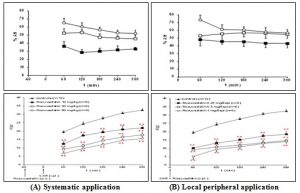 FIG. 4: SHEMATIC DIAGRAM ANTI-HYPERALGESIC EFFECT OF ROSUVASTATIN, EXPRESSED AS A DIFFERENCE IN THE PRESSURE BEFORE AND AFTER TREATMENT COMPARED TO THE CONTROL GROUP D (G) AFTER SYSTEMIC (A) AND LOCAL PERIPHERAL ADMINISTRATION (B) 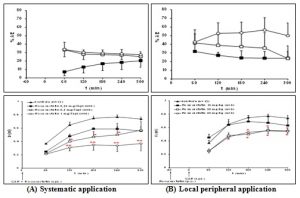 FIG. 5: SHEMATIC DIAGRAM ANTI-EDEMATOUS EFFECT OF ROSUVASTATIN, EXPRESSED AS A DIFFERENCE IN THE PRESSURE BEFORE AND AFTER TREATMENT COMPARED TO THE CONTROL GROUP D (ml) AFTER SYSTEMIC (A) AND LOCAL PERIPHERAL ADMINISTRATION (B)

The curve of the log dose ratio and the effect of rosuvastatin constructed for values of maximal % AE has a high coefficient of correlation (r = 0.996).

Although existing studies point to the anti-inflammatory effect of statin, there is still not enough data pertaining to their function as analgesics. Anti-inflammatory examination of rosuvastatin in the rat model after systemic and local administration showed a statistically significant antihyperalgic effect.

In systemic applications, the difference in pressure in the paw pressure was decreased on a dose-dependent basis, with the maximum antihyperalgic effect being rosuvastually achieved after 60 - 120 min. When it comes to local peripheral administration, in combination with the caregiver, there is also a significant reduction in the difference in pressure of the paw, where rosuvastatin achieves the maximum antihyperalgic activity after 60 - 180 min.

After local peripheral administration of rosuvastatin together with carrageenan, statistically significant and dose - dependent reductions were observed in relation to the control group. For both models, rosuvastatin effects are of a local nature, as the effect of the highest doses of rosuvastatin administered contralaterally in the healthy rat suture has been absent.

ACKNOWLEDGEMENT: I want to thank my family and colleagues who were with me.

CONFLICT OF INTEREST: Certify that we have no conflict of interest in the subject matter.