Non enzymatic glycation takes place when elevated levels of reduced sugars react with amino groups of proteins and is called as advanced glycation end products (AGEs) are responsible for Diabetes Mellitus. Hydroalcoholic extract of Whitton root (Eulophia nuda) was tested for in-vitro inhibition of non-enzymatic glycation of Immunoglobin G.  Plant extracts have their own importance and now being studied extensively due to having little or no side effects in all aspects of life sciences  from botany to medicine in biochemical research. In present study Whitton root was selected and used to check the glycation inhibitory activity in-vitro condition. Various combinations of glucose, protein and Whitton root extracts were made under in vitro conditions and their activity was monitored with Trichloro acetic acid treatment method at 350 nm. Glycated products/ AGEs were more with high glucose and high protein concentration and these were decreased by highest concentration of Whitton root extract i.e. 30 mg/mL or 300 μL. Lower concentrations of plant extract produced either no or least response against advanced glycation end products (AGEs).

INTRODUCTION: Nonenzymatic glycation of protein by reducing sugars is a complicated pathway of various modifications that lead to formation of advanced glycation end products (AGEs).  Stable Amadori products are formed by organic reactions with the Schiff base which will further undergo a series of reactions through dicarbonyl intermediates to form AGEs.  It is also assumed to be formed by sequential glycation and oxidation reactions called glycoxidation. The accumulation of the reaction products of protein glycation in living organisms leads to structural and functional modifications of tissue proteins 1.

The role of Advanced glycated end-product proved to be significantly responsible in diabetic microvascular complications of retinopathy, neuropathy and nephropathy as well as their role in the accelerated hyperlipidemia 2. There is evidence that glycosylation leads to biochemical modification of Immunoglobulin, and other macromolecules and is cause for pathogenesis of diabetic complications 3.

Even in the absence of Diabetes Mellitus the formation of AGEs progressively increases with normal aging. However, they are formed at more paced levels in diabetes. AGEs are not only markers but also important causative factors for the pathogenesis of diabetes, Hyperlipidemia, ketoacidosis, cataract, diabetic nephropathy, and neuropathy.

Thus, the design and discovery of inhibitors of AGEs formation is proved to be a boon for the prevention of diabetic or other pathogenic complications. (4) Aminoguanidine, a hydrazine-like small molecule, is the first AGEs inhibitor explored in clinical trials. However, the drug was not used commercially due to its side effects in phase III clinical trials in patients associated with diabetes, although related to some extent to the confiscation of pyridoxal, resulting in vitamin B6 deficiency 5.

Process of treatment of purified human IgG with glucose induced its glycation is time and pH dependent. Kenedy et al. 1994 6 proved that the level of glycated IgG, IgM, and IgA increased in diabetic patients.

In 1912, Louis Camille Maillard explained the browning of proteins in food and called it as Maillard reaction. This is also known as non-enzymatic glycation of proteins, or a process which links chronic hyperglycemia to a series of physiopathological alterations considered important in the development of chronic complications of different diseases like diabetes and hyperlipidemia 7.

The further rearrangement of these glycated proteins give rise to a stable Amadori product that degrades into a variety of compounds which, more reactive than the sugars from which they are derived 8. These propagators again form yellow-brown, often fluorescent (some are non fluorescent), irreversible compounds, usually called Advanced Glycation End- Products (AGEs) or Maillard products. Candidate active AGE compounds include N-(carboxymethyl)-Llysine (CML) pyrraline, pentosidine and their crosslink’s 9.

Medicinal plants have been used for decades to treat disease in subcontinent. The vast use of herbal remedies and healthcare preparations, described in ancient Holy texts gave evidence for the occurrence of natural products with medicinal properties. In fact, wild plants produce a multi range of bioactive molecules, making them enriched source of various types of medicines 10. Higher plants, as sources of medicinal compounds, have continued to play a significant role in the maintenance of human health since ancient times 11.

Over 50% of all modern clinical drugs are of natural product origin 12 and natural products play an important role in drug designing programs in the pharmaceutical industry 13.

It is known that medicinal plants have little or no side effects.  Metformin is the only ethical drug approved for the treatment of non insulin dependent diabetes mellitus (NIDDM) patients, 14 which is derived from a medicinal plant Galega officialis and historically used for treatment of diabetes 15. There are many anti-diabetic plants, which might provide useful sources for the development of drugs, in the treatment of diabetes mellitus. The literature on medicinal plants with hypoglycemic activity is vast, as many of these plants were used for many centuries and sometimes as regular constituents of the diet.

Synthetic inhibitors and inhibitors from plant extracts have their own importance and now are studied extensively. There are reports of some natural substances isolated from plants with AGE-inhibitory effects. One such compound is curcumin isolated from Curcuma longa (Turmeric), commonly known as Haldi. Ginger (Zingiber officinale Rosc.) is another spice useful for diabetic therapy 16. When type 2 diabetic rats are fed ginger, they show hypoglycemic activity, thus improving their diabetic condition. (17.

Now it is the need of time to develop some new compounds either from plants or synthetically to control diabetes and other age accelerating diseases. As plants have fewer side effects so these should be preferred to study.

Preparation of Whitton root (Eulophia  nuda) extract: Dried and ground Whitton root rhizomes and fruit (10g) was extracted by hydroalcoholic method with 60 mL of 50% ethanol at 37°C for 10 days and then filtered and stored at 4°C for further experiment.

Sample Recovery: Rotary Evaporator was used for recovery of sample by ethanol evaporation.  Obtained dried and ground sample was dissolved in 25 mL of phosphate buffer saline and stored at 4°C for further use.

In vitro glycation of BSA with Whitton root (Eulophia  nuda) extract: Glucose, BSA with or without inhibitor (plant extracts in PBS pH 7.4) were prepared and their mixture was incubated at 37°C and 50°C for 5 weeks. During this, samples were drawn for glycation inhibition activity after 1st, 3rd and 5th week of incubation. The samples kept at 4oC until analysis.

Trichloracetic acid (TCA) method for Maillard reaction inhibitory activity of Whitton root (Eulophia  nuda) extract: Matsuura et al, 2002, 18 described this method and known to be as TCA treatment which was followed with some modification.

RESULTS AND DISCUSSIONS: Whitton root rhizomes and fruit were dried in hot air oven at 37OC. After drying, ground to powder form and kept in 50% ethanol for extraction. As it was cheaper and less time consuming, Rotary Evaporator was used to recover the sample.  After 1st, 3rd and 5th week of incubation samples were drawn for glycation inhibition activity.

Glucose concentration 25.0 mM and 5.5 mM were selected as it was cleared that 25.0 mM is a hyperglycaemic condition and 5.5 mM is a normal glucose level 19. Bovine serum albumin (BSA) was used as protein for glycation and its concentration was 15 mg/mL and 7.5 mg/mL. Whitton root extracts (300 μL, 150 μL and 75 μL) in phosphate buffer were prepared. Each extract along with glucose and BSA were incubated at 37°C and 50°C for five weeks to monitored glycation and Millard reaction inhibitory activity. 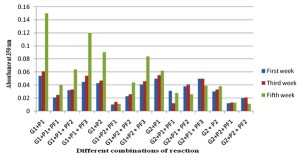 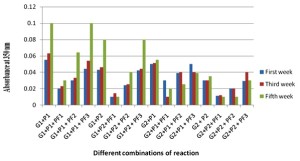 It was also observed from both figures that high temperature facilitate the production of Maillard  products. Moreover, high temperature did not affect the activity of whitton root extract i.e. their trend towards inhibition is same. Onion and garlic have significant blood sugar lowering action. Our results are supported by Demerdash et al.2005 20.

ACKNOWLEDGEMENT: Authors are thankful to the management of SGV University, Jaipur for providing necessary facilities.