INTRODUCTION: Rheumatoid arthritis (RA) is long lasting, systemic autoimmune disorder characterized by inflammation of the synovial joints and concomitant destruction of cartilage and bone 1. It is generalized disease in which joint symptoms are merely the most prominent feature. About 1% of the world's population is affected by this disease, in which women are three times more affected than men.

The disease onset is frequent between the ages of 40 and 70, but can influence people of any age 2.

Inflammation is central to progression of RA. Many inflammatory cytokines have been recognized to play pivotal role in the pathogenesis of the disease 3. TNF-α and IL-1β are main cytokines which are abundant in an inflamed synovium 4. Dysregulated expression of TNF-a in experimental arthritis has been reported to cause destructive arthritis 5.

The development of disease is markedly suppressed in IL-1b deficient experimentally induced arthritis 6. These studies suggest the role of pro-inflammatory cytokines in arthritis and therefore can be targetted for therapeutical potential. Various studies have been conducted and explored the strategies to treat arthritis include the blocking of TNF with high affinity antibodies 7, 8.

Several treatments are prescribed for RA. In recent years, several researchers have proved the possible role of reactive oxygen species (free radicals) produced during metabolic processes, in pathogenesis of RA 9, 10. Further, many workers have reported the disturbed antioxidant levels during RA, and have proposed that antioxidants exert synergistic action in scavenging free radicals 11, 12. Current treatment modalities for RA are mostly symptomatic. Although number of remedies like disease-modifying antirheumatic drugs (DMARDs) are present to limit the degree of irreversible joint damage 13 for a better health status of RA patients.

But the value of DMARDs for treating RA is limited by their side effects. The major side effects of NSAIDs are their propensity to cause stomach ulcers, GI bleeding and perforations 14. So, there is still a need to look for therapeutic agents with lower side effects that can be used for long-term administration. In last decade, there has been increase in the popularity of alternative medicine in clinical practice 15. Herbal preparations are mostly used therapy among alternative medicine for RA 16.

Crocus sativus L. (Family: Iridaceae) commonly known as saffron, is a perennial stemless herb which is cultivated in several countries like India, Iran and Greece.

In India, it is mainly cultivated in Kashmir an Uttaranchal. The dried red stigmas of the flower are mainly used for therapeutical purposes such as anticonvulsant, antidepressant and antitumor activities 17, 18, 19. The stigmas of the plant are mainly used for therapeutic purposes. Saffron extract has also been shown to have protective effects on genotoxin induced oxidative stress in swiss albino mice 20. We have taken up this study to assess the anti-inflammatory effect of saffron extract in adjuvant induced arthritic mice.

4.0 gm. of stigmas were macerated in 70% ethanol for three days. The mixture was then filtered and collected. The solution thus obtained was lyophilized. As a result, the extract yield was 48.2%. The dried powder was then reconstituted to get desired concentration for experimentation i.e, 25, 50 and 100 mg/kg body weight.

The experiment was carried out with female Swiss albino mice (12-14 weeks old) weighing 28-30 g. These animals were procured from NABL-compliant Institutional Animal facilities (Indian Institute of Toxicological Research, Lucknow) and maintained in the CPCSEA approved animal house of Era’s Medical College and Hospital, Lucknow. The animals were kept in hygienic conditions and fed on the pellet diet (Lipton, India) and water ad libitum. Prior permission for the experiment was sought from the Institutional Animal Ethics Committee.

Animals from each group were used for drawing blood on day 47. Blood was drawn from the retro-orbital sinus using capillary tube and divided in two sterile tubes, one containing EDTA to obtain plasma and other was plain to obtain serum. Whole blood was kept at room temperature for 2 h. Serum was collected as supernatant after centrifugation at 2500 rpm for 5 minutes.

Plasma was separated from the blood collected in EDTA vials, by centrifugation at 2500 RPM for 10 minutes at room temperature. Plasma was then transferred to separate sterile tubes for biochemical analysis. The RBC pellet was found intact in the bottom of tube, which was then washed twice with normal saline to remove buffy coat. Further, chilled distilled water was added equal to the amount of plasma separated. Thereafter, it was centrifuged at 8000-10,000 rpm for 20 minutes and the supernatant (lysate) was collected and the pellet (cell debris) was discarded.

Inflammatory site on the joints ranging from 4-5mm was dissected out, weighed and a 10% homogenate was prepared in ice cold phosphate buffered saline (PBS) containing 0.5% Tween-20. The homogenates was centrifuged at 2000g for 10 min and the supernatant was filtered using 0.2 mM Millipore filters and used for cytokine assay.

ELISA based cytokine analysis kits were procured from RayBiotech, Inc. USA (Lot#1004130408), and TNF-α and IL-1β were estimated, in the joint homogenates, using solid phase sandwich ELISA. The protocols laid in the technical bulletin of the manufacturers were followed. Plates were read on iMark microplate reader (Bio-Rad, CA).

Student ‘t’ test was performed to evaluate the significance of the difference in the mean values of extract treated and untreated group. P<0.05 was considered as significant.

On day 2, we observed swelling in the paw of animals at the site of FCA injection. Further after the booster dose of FCA, we recorded a significant swelling and inflammation in the paw of animals on day 14th. The edema persists till day 47 as evidenced in figure 1. Oral administration of different doses of CSE (25, 50, 100 mg/kg b.w.) was started on day 1 in respective animal groups and continued till day 47. Following the oral dose of CSE, we observed a visible reduction in inflammation in the animals.

On day 47, we observed higher degree of swelling, redness and erythma in AIA group animals, while decreased swelling was recorded in CSE treated animals. Further, we collected the blood from all animals for biochemical and antioxidant enzyme estimation. The joints were surgically removed and processed to obtain joint homogenate. 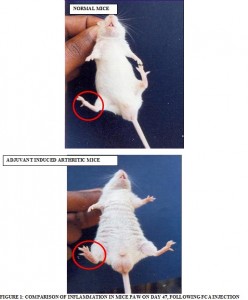 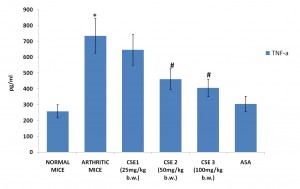 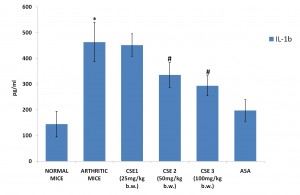 The values are expressed as mean ± SD

CONCLUSION: In the present study, we have observed that the crocus sativus extract is capable of reducing the pro-inflammatory cytokines such as TNF-α and IL-1β in adjuvant induced arthritic mice. This effectiveness of CSE reveals its anti-inflammatory action. On the other hand, CSE resulted in controlling the reduction of antioxidant enzymes such as glutathione reductase and superoxide dismutase in AIA mice. This finding led

us to reveal that CSE also exerts antioxidant effect during the disease. We can thus conclude that CSE possess anti-inflammatory as well as antioxidant property due to presence of active constituents. Therefore, we can suggest that saffron may be a safer and effective choice of alternative medicine for the treatment of inflammatory disease such as RA.