Ethanol extracts of Naringi crenulata leaf and bark were evaluated for its anti-inflammatory activity at the dose levels of 250mg kg-1 and 500mg kg-1 body weight using a Carrageenan induced paw oedema method (acute inflammation).  Results showed that both leaf and bark ethanol extracts had potent and significant anti-inflammatory activity.  These results were also comparable with reference drug indomethacin used in this study.

INTRODUCTION: ‘Inflammation’ is pathophysiological response of living tissue to injury that leads to local accumulation of plasmatic fluid and blood cells1.  Inflammation results in the liberation of endogenous mediators like histamine, serotonin, bradlykinin, and prostaglandins etc., Prostaglandins are hyperalgesic, potent vasodialators and also contribute to erythema, edema and pain 2.  Pain due to inflammation is an unpleasant sensation that is a consequence of complex neuro chemical processes in the central and peripheral nervous system 3.

Drugs that are currently used for the management of mild to moderate, severe pains and for inflammatory conditions, are opiods, non-steroidal anti-inflammation drugs (NSAIDS) and corticosteroids.  Studies reveal that the risk of gastrointestinal irritation4, liver damage5 and renal damage6 were significantly associated with acute use of non-steroidal anti-inflammatory drugs.  There is continuous search especially from natural sources for alternative agents.

Plants represent still a large untapped source of structurally novel compounds that might serve as lead for the development of novel drugs 7 that are capable of suppressing, reducing or relieving pain as well as inflammation with less adverse side effects.

‘Naringi crenulata’ commonly known ‘kattunarakam’, ‘Malanarakkam’, in Malayalam, ‘Mahavilvam’ in Tamil, a wide spread species of the genus “Naringi”.  It has been used as folk medicine 8.  The root extract is used for vomiting, dysentery and colic disorders 9.   It is reported that its methanolic extract showed significant anthelmintic activity 10.

Plant Material: Leaves and bark of Naringi crenulata (Roxb) Nicolson, were collected in the month of February and March, 2010, from the Agasthiarmalai Biosphere Reserve, Western Ghats, Tirunelveli.  The plant was identified with the help of local flora and authenticated in Botanical Survey of India, Southern Circle, Coimbatore, Tamil Nadu, India.  A voucher specimen of the plant was deposited in Ethnopharmacology unit, Research Department of Botany, V.O. Chidambaram College, Tuticorin.

Preparation of plant extract for anti-inflammatory activity: The leaf and bark of Naringi crenulata were cut into small pieces, washed, shade dried at room temperature and the dried plant materials were powdered in a Wiley mill.  The powdered leaf and bark were separately packed in a soxhlet apparatus and extracted with ethanol.  The ethanol extracts were concentrated in a rotary evaporator.  The concentrated ethanol extracts were used for anti-inflammatory activity.

Acute toxicity study: For toxicity studies, six Albino rats of either sex were administered orally with the test substance in the range of doses 200-2000mg/kg and the mortality rates were observed after 72h.  The ethanol extracts of leaf and bark of Naringi crenulata had shown no mortality at 2000 mg/kg. Therefore 2000mg/kg dose was considered as LD50 cut off dose (safe dose).

Carrageenan – induced hind paw oedema: Albino rats of either sex weighing 150-200 grams were divided into four groups of six animals each.  The dosage of the drugs administered to the different groups was as follows.

All the drugs were administered orally.

After one hour of the administration of the drugs, 0.1ml of 1% W/V carrageenan solution in normal saline was injected into the subplantar tissue of the left hind paw of the rat and the right hind paw was served as the control.  The paw volume of the rats were measured in the digital Plethysmograph (Ugo basile, Italy), at the end of 0 min, 60 min, 120 min, 180 min, 240 min, 360 min and 480 min. The percentage increase in paw oedema of the treated groups was compared with that of the control and the inhibitory effect of the drugs were studied.  The relative potency of the drugs under investigations was calculated based upon the percentage inhibition of the inflammation. The percentage inhibition of the inflammation was calculated from the formula;

Control (% increase in paw volume in the 3rd hour)

The anti-inflammatory effect of the extract was calculated by the following equation;

Statistical Analysis: The observations were analyzed using students t-test statistical methods.  For the statistical tests, p values of less than 0.01 and 0.05 were taken as significant. 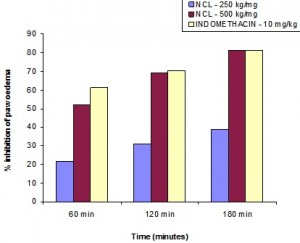 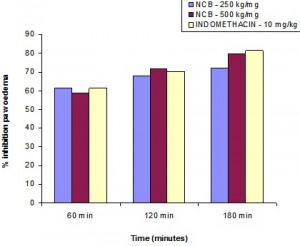 DISCUSSION: Carrageenan induced inflammation is useful to detect orally active anti-inflammatory agents.  The development of oedema in the paw of the rat after injection of Carrageenan is a multi-mediated phenomenon that liberates diversity of mediators 12, and it has been described as a biphasic event 13.  The initial phase seen at 60min (+1hr) is attributed to the release of histamine and serotonin 14, while the second accelerating phase (over 1hr) of swelling is due to the release of prostaglandin like substance 15, the cyclooxygenase products and the continuity between the two phases is provided by kinins 16.  Development of oedema induced by Carrageenan is commonly correlated with early exudative stage of inflammation 17, 18.

It has been reported that the second phase of oedema is sensitive to both clinically useful steroidal and non-steroidal anti-inflammatory agents19.  Results of present study shows the significant activity observed in the suppression of earlier phases of carrageenan induced inflammation by both standard and crude drugs may be due to inhibition of the release of early mediators of inflammation such as histamine, serotonins and kinins.  The pattern of antiinflammatory activity and % inhibition in paw volume exhibited by these extracts were similar to that of Indomethacin which suggests that the plants activity may be mediated by cyclooxygenase (I) and (II) inhibition.

The reference Indomethacin (NSAID) used in this study are known to inhibit cyclooxygenase enzymes (I) and (II) which are implicated in the production of inflammation mediating agent prostaglandin from arachidonic acid.  Since Carrageenan induced inflammation model is a significant predictive test for antiinflammatory agents acting by mediators of acute inflammation, the results of this study are an indication that Naringi crenulata can be effective in acute inflammatory disorders.

It can be concluded that the present work indicate the efficacy of leaf and bark extract of Naringi crenulata as efficient acute phase anti-inflammatory drugs, traditionally used by Indian medical practitioners in the treatment of various types of pains and inflammation.