INTRODUCTION: Inflammation and pain are local response of living mammalian tissue to injury. It is a body defense reaction in order to eliminate or limit the spread of injurious agent. There are various components to an inflammatory reaction that can contribute to the associate symptoms and tissue injury. Edema formation, leukocyte infiltration and granuloma formation represents such components of inflammation 1.

Histamine, 5-hydroxy tryptamine and bradykinin are the first detectable mediators in the early phase of carrageenan induced inflammation 3, whereas prostaglandins are detectable in the late phase of inflammation 4.

The use of plant preparations and extracts of their anti fertility properties has a long-standing history among Indian physicians. In this regard, one such plant which has number of traditional uses is Momordica Cymbalaria Hook F (Family-Cucurbitaceae). It is perennial herb distributed over tropical parts of Tamil Nadu, India and well known as Athalakai. It is also found in this state’s of Karnataka, Andhra Pradesh in India. It is traditionally used as abortifacient.

Ethanol extract is reported to have anti-ovulatory, abortifacient and anti implantation activity 5. The extracts and the dried form of fruit and leaves were shown to have anti diabetic, hypolipidemic, anti hyperglycemic activities 6-9 and recently shown anti microbial activity 10.

Treatment of Aerial Parts: The dried aerial parts were powdered by means of mixer grinder and were sieved through sieve no.40 to get the coarse powder (750gm) and it was extracted with methanol by continuous hot extraction method and obtained extract is concentrated and stored in vacuum desiccator. The obtained yield was found to be 8.2%. Then it was subjected to qualitative phytochemical analysis. The results related to that the presence of alkaloids, flavonoids, glycosides.

Animals: Wistar rats were obtained from IRTT Perundurai Medical College, Perundurai, India, and used for anti-inflammatory study. They were fed on commercial diet and water ad libitum. All the animals were acclimatized for a week before use. The room temperature was maintained at 25±1oC. The experimental protocol was approved by institutional animal ethical committee (JKKMMRFCP/IAEC/2010/ 016).

Acute Oral Toxicity: The acute oral toxicity of the Methanolic aerial parts extract of the Momordica cymbalaria Hook f was carried out as per OECD 423 – guidelines. The acute toxicity studies revealed that LD50, Up to 5000mg/kg did not produce any toxic effect. Hence the biological dose was fixed as 100mg/kg and 200mg/kg respectively.

Experimental design: Experimental rats were divided into four groups of five animals each and treated for    2 days as follows.

Procedure: Wistar rats were divided into 4 groups and each group consists of 5 animals. Paw swelling was induced by sub-plantar injection of 0.1 ml 1% sterile carrageenan in saline into the right hind paw. Group-I served as control which received the vehicle (1% carrageenan 0.1 ml on 5% gum acacia solution 5ml/kg) group-II received the standard drug (Indomethacin 10mg/kg/p.o.).

Group-III, IV, were received the plant extract 3, 4, 5 and 6 at the dose of 100 and 200 mg/kg/p.o.). All the treatments were given 60 minutes prior to carrageenan injection. The inflammation was quantified by measuring the volume displaced by the paw, using a Plethysmometer at time 0, 1, 2 and 3 hours after carrageenan administration. The paw volume was determined and the percentage inhibition of edema was calculated in comparison to the control group 10-11.

Statistical analysis: Values reported are expressed as mean ± SE and analyzed for ANOVA followed by Student’s t- test. A value of p<0.001 was regarded as significant.

Carrageenan induced rat paw edema has been used as an inflammation model in order to investigate the anti-inflammatory effect of the drug. There are two phases of Carrageenan induced inflammatory reaction early or first phase and later or second phase. It has been proposed that early phase results from histamine, serotonin and bradykinin liberation while late phase is associated with the release of prostaglandin. In Carrageenan induced paw edema and the extracts of Momordica cymbalaria hook F., showed maximum inhibitory activity at (55.43) with the dose of 200 mg/kg after 4 h of drug treatment (table 1, figure 1). 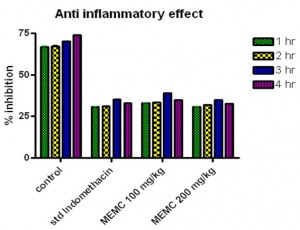 From these results, it is suggested that anti inflammatory effects of the methanol extract of aerial parts of Momordica cymbalaria hook f on Carrageenan induced edema may be related to inhibition of inflammation mediator formation.

The data suggested that the extract containing flavonoids compound may be significantly utilized as anti inflammatory activity. If other related further studies and clinical trials are carried out, it will definitely open up a new vistas in modern medicine.