Cyperus rotundus Linn. (Cyperaceae) is an indigenous medicinal plant used for the treatment of pain, inflammation, diarrhoea, tumours, wounds and as Antidiabetic Anticonvulsant, Antimicrobial, Antiallergic, Antioxidant and Antiarthritic. The methanolic extract of rhizome was subjected to anti-inflammatory activity using experimental animal model of carrageenan induced paw edema in the presence of control for comparison. The results showed that methanolic extract significantly ameliorate oedema comparable to reference standard, Indomethacin. The results of this study explicate justification of the use of this plant in the treatment of inflammatory disease conditions.

INTRODUCTION: The genus Cyperus includes common weeds found in upland and paddy fields in temperate to tropical regions. In Asian countries, the rhizomes of Cyperus rotundus, which are used as traditional folk medicines for the treatment of stomach and bowel disorders, and inflammatory diseases, have been widely, investigated 1-4. Cyperus rotundus (Cyperaceae) is a traditional herbal medicine used widely as analgesic, sedative, antispasmodic, antimalarial, stomach disorders and to relieve diarrhoea 5.

Inflammation clinically causes, as shown by Cornelius Celsus of Rome 2000 years ago, rubor (redness), calor (heat), dolor (pain) of the affected region 6 and is a complex biological response of vascular tissues to harmful stimuli including pathogens, irritants or damaged cells 7. It is defensive mechanism of the body to remove the injurious stimuli as well as initiate the healing process for the tissue. Inflammation, however, if runs unchecked, leds to onset of diseases such as vasomotor rhinnorrhoea, rheumatoid arthritis, and atherosclerosis 8.

It is believed that current drugs available such as opoids and NSAIDs drugs are not useful in all cases of inflammatory disorders, because of their side effects, economy and potency9,10. As a result, a search for other alternatives is necessary. The use of plants to treat ailments is as old as antiquity. Records of humans using plants to treat diseases have been recorded as far back as 6000 to 4000 years ago when Ayurvedic physicians started treating tumors with extracts from plants.

Animals: Albino rats weighing 150-250 gm. of either sex were used for the study.

The animals were procured and housed in the animal house of Ram-eesh Institute of Voc. and Tech. Education for at least 2 week prior to the study for acclimatization. Animal house was well maintained under standard hygienic conditions at a temperature (25±2oC), room humidity (45-55%) with food and water. Cleaning and sanitation was done on alternate days. Paddy husk was provided as bedding material and was changed every day. All the experiments were performed after obtaining prior permission from Institute of Animal Ethical Committee.

Plant Material: The rhizomes of Cyperus rotundus (Family: Cyperaceae) was collected from Khari-baoli, local market of New Delhi, identified and authenticated by Dr. H. B. Singh (Taxonomist), National Bureau of Plant Genetic Resources (NBPGR), Pusa Campus New Delhi, with Ref. no. NISCAIR/RHMD/ Consult/-2011-12/1801/101). The Rhizomes of Cyperus rotundus were coarsely powdered and extraction was carried out in soxhlet apparatus with help of methanol as a solvent at 60oC -70oC. Dried methanolic extract was stored at 4oC. The methanolic extract was completely solubilized in 1% w/v Cellulose Methyl cellulose solution for use in in-vivo experiments.

Carrageenan induced Rat Paw Edema Model: The rats were divided into four groups containing six rats (one control, one standard & two test groups) and acute inflammation was induced according to edema assay. The extract was suspended in 1 % C.M.C solution & administered orally (500 mg/kg and 1000mg/kg body weight. p.o) to rats 1 hour before Carragenan injection. Indomethacin (10 mg/kg body weight p.o) was given to standard group. Carrageenan was prepared as 1% w/v solution in 0.9 % w/v NaCl and injected 0.1 ml underneath the planter region.

The paw volume was measured with Plethysmograph at 0, 30, 60 and 120 min. after Carrageenan injection.

The percentage of inhibition of edema was calculated using formula:

Statistical Analysis: Results of the study were expressed as mean ± S.E.M. ANOVA followed by Dunnett’s t-test were used to determine significant differences between groups. P-values less than 0.05 were considered as indicative of significance.

RESULTS: The results of anti-inflammatory activity revealed that, the extract exhibited dose dependent anti-inflammatory activity. At the dose of 1000 mg/kg the methanoilc extract showed maximum inhibition of the edema (57.5%) as compared to control. The detailed results are shown in Table 1. The extract was tested for anti inflammatory activity using carrageenan induced edema models (Table 1). From the result, the methanolic extract of Cyperus rotundus significantly inhibited (**p < 0.01 *p < 0.05) Carrageenan induced rat paw edema at 500 mg/kg and 1000 mg/kg body weight (Table 1).

DISCUSSION: The present study establishes the anti-inflammatory activity of the methanolic extract of Cyperus rotundus in the experimental model. Carrageenan induced rat paw edema is a suitable experimental animal model for evaluating the anti-inflammatory effect of natural products 11 and this is believed to be triphasic, the first phase (30min. after carrageenan challenge) involves the release of serotonin and histamine from mast cells, the second phase (60min.) is provided by kinins and the third phase (120min.) is mediated by prostaglandins, the cycloxygenase products and lipoxygenase products 12. The metabolites of arachidonic acid formed via the cycloxygenase and lipoxygenase pathways represent two important classes of inflammatory mediators, prostaglandins (products of the cycloxygenase pathway) especially prostaglandin E2 is known to cause or enhance the cardinal signs of inflammation, similarly, leukotriene B4 (product of lipoxygenase pathway) is a mediator of leukocyte activation in the inflammatory cascade 13. 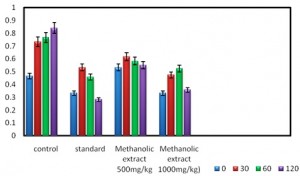